I used to work as the executive director of a music industry association. To date, this is the fanciest job title I have ever held that secretly just means “writes emails a lot.” The first time I ever came to work dressed as myself was a tentative toe dipped into a bottomless pond, I wore a black and white horizontal striped shirt I’d bought from Frank&Oak five years earlier, black skinny high-waisted Levi’s, and a cheap pair of four-inch heel combat boots I bought from eBay at 2 a.m. I painted my fingernails black, and one of my employees would later tell me “I just thought you had gone goth or something.” Imagine coming out as goth in your mid thirties? I would simply die. 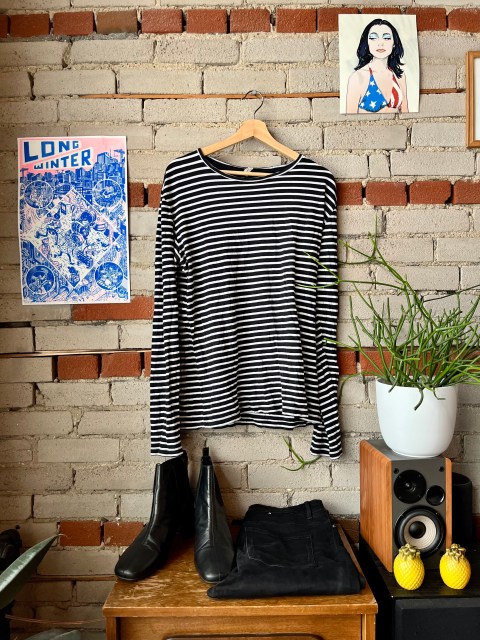 I lived in the Yukon for the first year or so of my transition, and the unofficial slogan there when I was growing up was: where the men are men and the women are too. I found myself struggling to accept myself as a woman and manage the expectations of masculinity imposed on that womanhood in the environment I lived in. Plus, I worked in construction for almost 20 years, and there was a very strong idea of who I was, internally and externally.

Needless to say, I got really into the idea of cutting all the sleeves of my old t-shirts just low enough that I had to wear a bra underneath. My early baby trans/baby gay/baby dyke phase. My favorite was a Dinosaur Jr shirt, grey with darker grey detailing, that I cut down to the border of maybe a bit slutty. I would wear that with high-waisted skinny Levi’s — forever my favorites — and Blundstones and, if I had a business meeting, a little cardigan to class things up a little. This outfit often looked bad, but it felt nice, and honestly, that’s more important. 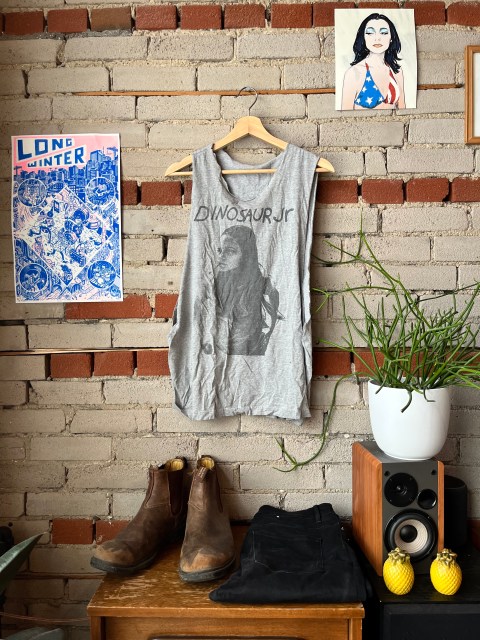 I took to tank tops in a big way for a long time. A gray or a red tank top underneath an open flannel shirt paired with — you guessed it — Levi’s high-waisted black skinny jeans and brown Blundstones. I wasn’t expressing anything with this outfit, but I wasn’t not expressing anything. It was like being very bad at hide-and-seek. I thought that if I dressed like this no one would notice I wasn’t the same as before, but I was also terrified of anyone seeing the real me.

The week before I left the Yukon forever, I wore a shirt with the pattern of a lobster and little sticks of butter over a grey She Shreds tank top with a mesh back baseball hat that said Loser on it. You could say decisions were being made, but it’s more that they were just kind of happening to me. Maybe this is what fumbling toward ecstasy means. 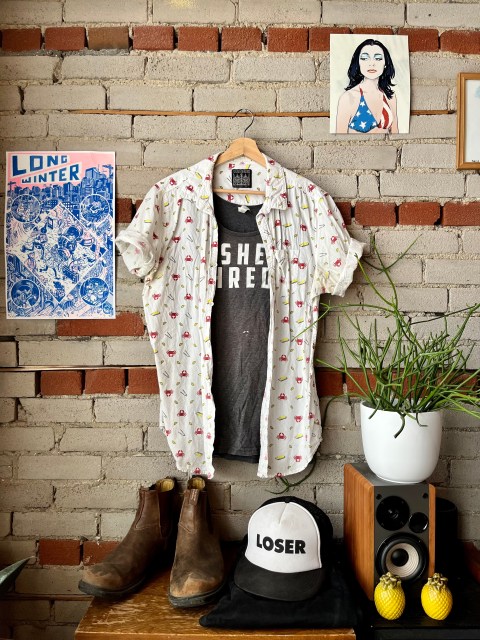 When I first landed in Toronto, I was just so tired and ready to hide and recover. I wore sweatpants and stayed inside my friend’s loft where I — and two suitcases of outfits I actually hated — hid in a bedroom. I wore the same Sleater-Kinney shirt cut into a tank top for most of the first month and smoked cigarettes on a fire escape where I made small talk with people in the building confused about my gender. Honestly, same. 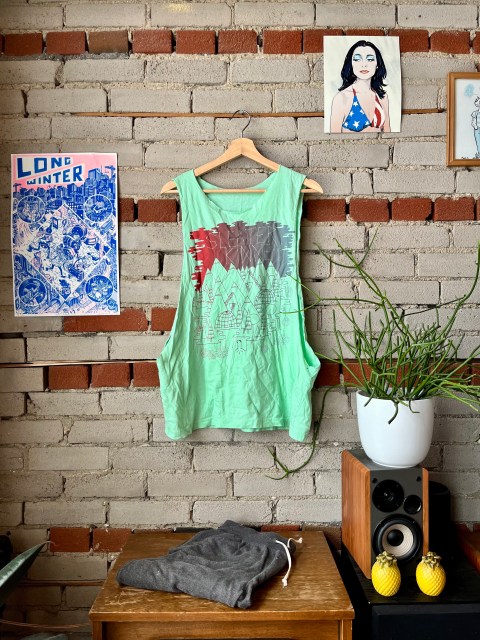 I moved to the spare room in another friend’s house and slowly began to unpack my suitcases and my life. Hanging all your clothes on a wall really puts a lot of things into perspective, and I slowly realized I hated all these clothes. I realized I lived in a city where no one knew me, didn’t know my past or the idea of my future, and I could do whatever I wanted! And what I wanted was the H&M in the mall, the one close to the Cinnabon. I bought some blouses, one pink and one with a little pattern on it, and some basic t-shirts. I let myself wear clothes that felt nice AND I was excited about. I still wore Levi’s high-waisted black skinny jeans, because some things just work.

The first winter I lived in Toronto, I decided to buy Doc Martens. I was a teen in the 90s, but I wasn’t telling anyone I was a girl then, so I kind of missed that whole scene. But because everything in time and space eventually comes back, I could finally be the 90s cool girl I always dreamed of. No one warned me about the whole “your heels will get shred to pieces unless you rub vaseline on the inside of the boot” thing, and I lost a lot of good socks in the process. Doc’s were a good call though, and they unlocked something in me. Maybe I was a 90s cool girl? 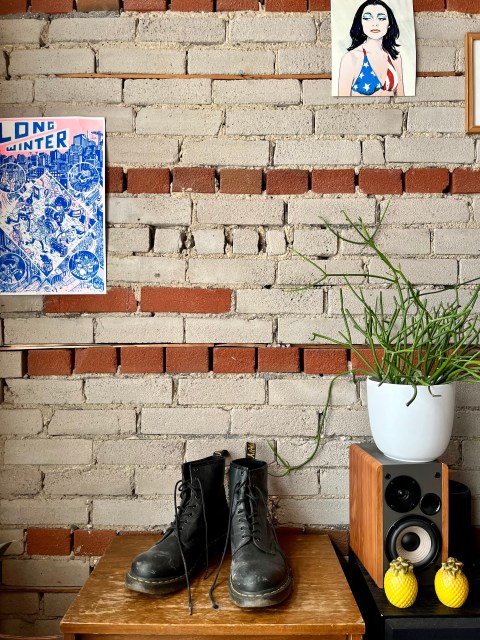 Niko is my second legal name and my third or whatever gender. If I have any advice for baby transes, it’s to REALLY know you like your name before you pay money to make it real in the eyes of the state. It is annoying when you try to get a new driver’s license and people think you’re the boring part of every spy movie with a bunch of different names on passports in a shoebox. I found my name when I realized I really liked being femme, when wearing tank tops under flannel got dull and I started buying things like a silk blouse from Everlane and a long grey jacket — a style my friend Sarah affectionately calls a Long Bitch Jacket. I was a long bitch. A long bitch named Niko in a Long Bitch Jacket. 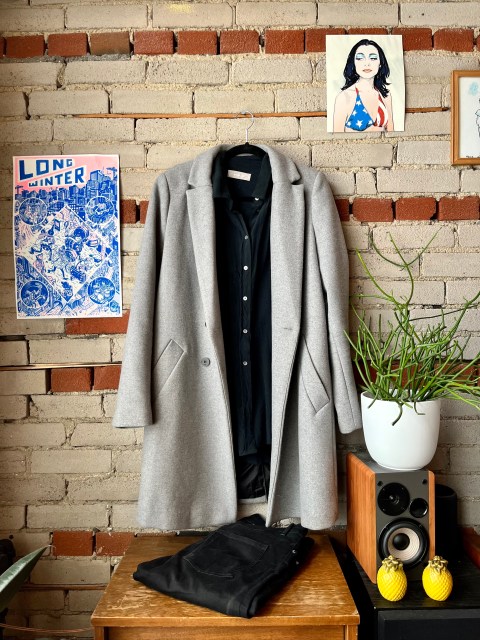 Honestly, a lot of my discovery of my personal style has been because of jackets. I got very into Long Bitch Jackets: the grey one that started it all, my favourite brown one from Zara that I got on Poshmark for $35, and a vintage grey winter coat with a real fur collar I got at the thrift store. When I found that last one, women appeared almost as if out of nowhere to tell me how jealous they were of my find, and I felt seen for the first time. No one here in this Value Village but us girls jealously commenting on each other’s finds! 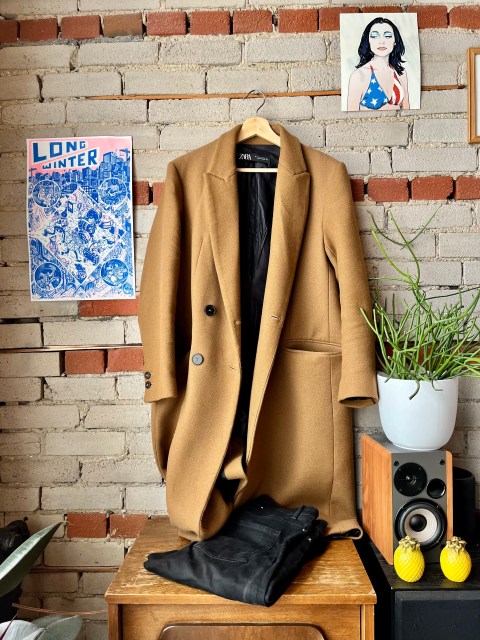 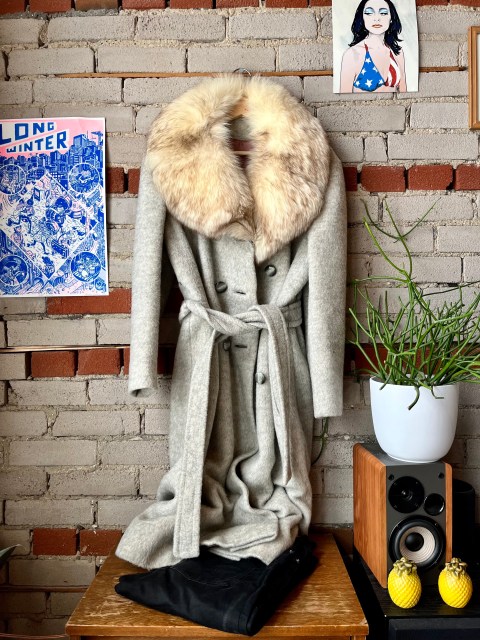 I have purged and given away so much of my wardrobe over the years since I came out. I have drawers full of basics that are dull and boring to me now, that were difficult for me to accept I needed in earlier years. I own nice bras that cost far too much money and silk blouses and flowy things. For Christmas one year, my partner and I decided to have two friends over, and for that I bought a black sleeveless dress, nice boots, and fun stockings. When I was putting my outfit together, my partner reminded me of when I used to loudly proclaim what a butch I was. Femme makes me happy, who knew. 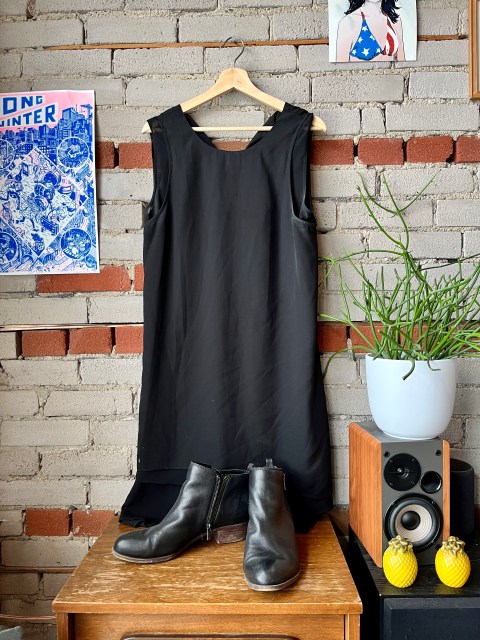 When I pitched this essay, I was wearing black leggings with a hole in the knee and a crop top that just says the word Fuck on it. Something I have discovered in the last year is how much I like to marry comfort with still feeling like I have some distance from my former life, so wearing leggings and just a bra —or a crop top that says Fuck on it — helps me feel like this is what Niko would want to wear, not what she was sporting so people wouldn’t ask too many questions. 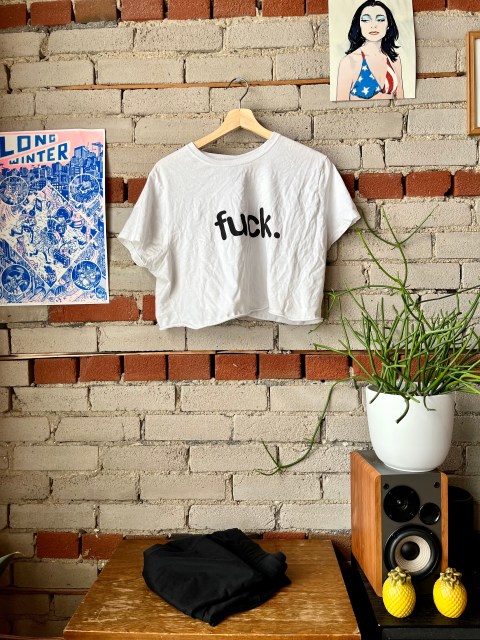 Some days when I work from home, I dress really nice. I wore this dress with sleeves that end with studs and tights and heels and did my makeup with the full intention of never leaving the house. Not because I’m afraid or hesitant of what’s out there or how people will perceive me. More just because of deadlines, and the coffee is cheaper when I make it myself. I don’t really worry or care what other people think of me — that period of my life is long since passed — but it’s nice to remember how terrifying it was to be a mid-thirties trans woman trying to figure it all out, feeling like I was getting nowhere, to being where I am now and knowing it’s more fun to dress nice for myself than for anyone else’s perception. 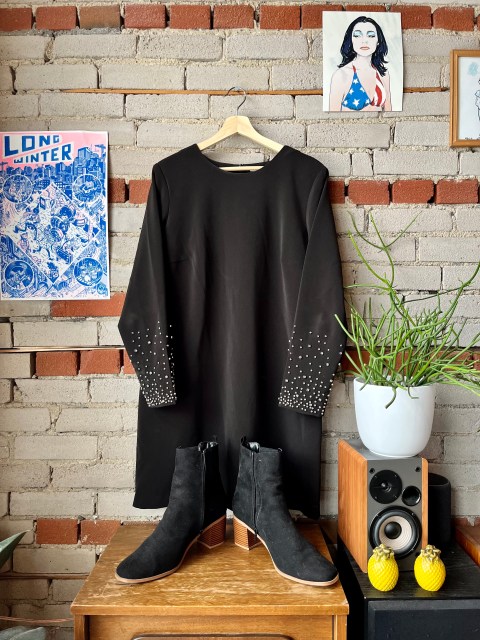