Hello again. Welcome to the final installment of These Shirts, my personal summer concert series, where I’m cataloging some shirts in my home and sharing their stories with you. If you’re just joining us, please find your way to These Shirts Were a Choice, followed by These Shirts Were Happenstance. If you’re looking for this weekend’s Y’All Need Help, which was indeed promised to you on June 2, come see me on August 25. This series is inspired by the book Worn Stories by Emily Spivack, as well as the list I pitched but never wrote in 2015, Top 12 Shirts I’ve Stolen From You, which was meant as a tribute to my long-suffering wife, Megan, flung out of space.

Today we’ve arrived at act III of our series. Act III: These Shirts Aren’t Mine. It was hard/impossible to write about these shirts in a meaningful way, most likely because they don’t belong to me. I took a different approach, then, because I like a challenge? (False, but let’s go with it.) All photographs were taken at high noon in the bloody desert, which isn’t ideal but neither is life ok. 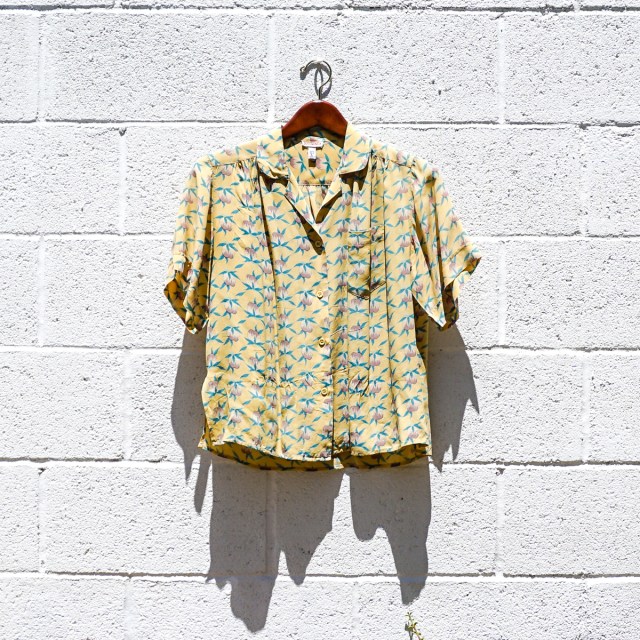 Belongs to: My grandmother who, as we’ve already covered extensively on this and other websites, is in fact no longer living, thereby technically making this shirt mine, though it never actually will be.

How it came to be in my home: My mom needed to do something with all of her mother’s clothes that were left behind because you can’t take clothes with you when you die. I was tasked with doing the something. She reasoned that I was the only one who knew which ones were antique pieces and which were not; which held sentimental value (to me) and which did not. This was mostly true and so, as I live in perpetual debt to my mother for giving birth to me and paying my ex-husband’s truck payment for several years, I did as I was asked. I imagine though that I did have to be asked a number of times before actually doing it, because I am her daughter and subconsciously want to keep her reminded of this fact.

It was a miserable day because truly nothing beats spending eight hours confronting your own mortality and the burden we’re all destined to leave behind by way of possessing so much crap which other people then have to distribute throughout the world one way or another. Then the distribution itself is fraught with sentimentality and grief and just the finality of the act, and doesn’t that sound like a lovely way to spend a Saturday in July?

Yes, I’m cycling through another minimalist phase and am possibly starting my period as I type this, why do you ask.)

I wrapped the antique and vintage pieces in acid-free tissue paper and packed them away. Two shirts came home with me: this silk number and cropped white button-up that I wear when I need to be authoritative but also accentuate my waist.

Worn stories: I’ve worn this shirt exactly one time, with extremely short cut-offs that were falling apart, and leather sandals. I can never really find any bottoms to pair it with, so it just stays in my closet like a flat, drapey, headless but loving homage to my grandmother. 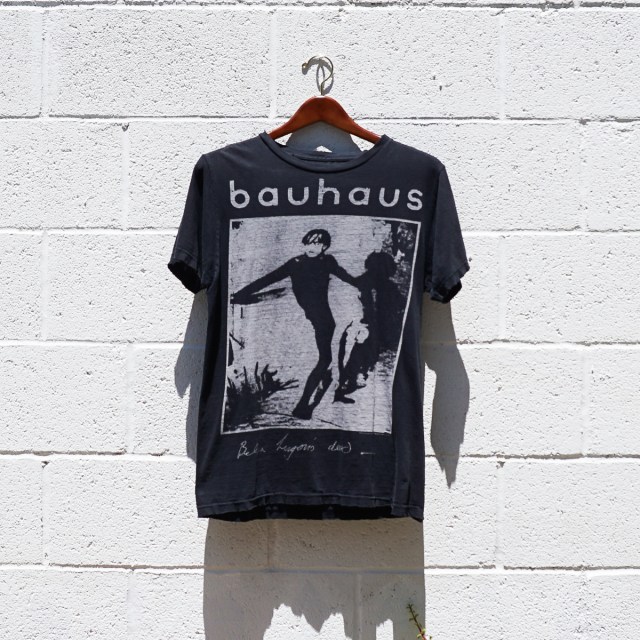 Shirt facts, observations: 100% cotton and extremely soft; has some holes.

Belongs to: Megan, my aforementioned wife.

How it came to be in my home: The shirt has been in my home longer than I have. I am in the shirt’s home.

Worn stories: I told you everything about this shirt in February, without saying anything about the shirt itself. (Eggplants are a nightshade.) I was sitting on the bench outside when she walked up to the restaurant. She was lanky and her shoulders curved forward. She had the face of a goddamned angel. She smelled like soap. She was a brand new mystery. She would not make eye contact.

She ate chocolate chip pancakes and asked me questions like, “If you could have any kind of food for the rest of your life, for free, what would it be?”

She’s worn this shirt so much that there are holes around the collar and the bottom is frayed. It’s since been replaced by a new version of itself, which she also wears frequently. You can’t have Megan without this Bauhaus shirt, nor can you have this Bauhaus shirt without Megan. The two are one. 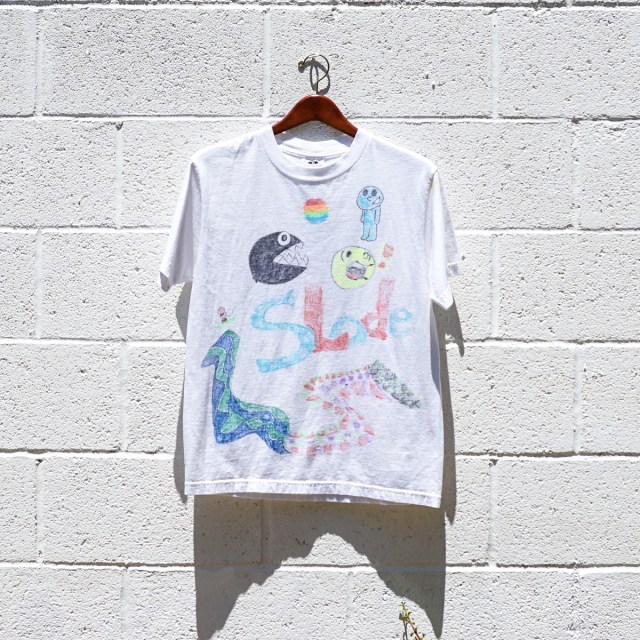 Shirt facts, observations: 100% cotton; on the thick side, but still soft, with some stains.

Belongs to: Slade, but Eli sometimes wears it to bed.

How it came to be in my home: There’s a bi-monthly Make It! day at the Phoenix Art Museum and we had a membership that year, so we were trying to go as often as possible to really get our money’s worth, you know? Make It! days are mixed media arts and crafts affairs, if you couldn’t guess. Apparently on this particular day, we were working with ink and cotton.

Some of this was drawn by my ex-girlfriend and some of it by Slade. Of everyone in this house, Slade and I are the only people who remember this day, and that feels weird sometimes. Eli had a shirt, too, but he doesn’t know where it is. His had trains drawn on it and, I think, a disturbingly large face of some sort.

Worn stories: The shirts provided by the museum were adult-sized, and both of the kids were small when we made them, so these were immediately rendered sleep shirts. The only problem was that the shirts were thick, scratchy cotton that hadn’t been broken in yet, so no one really wanted to wear them to bed, or at all. A neat thing about kids is that they are driven by a desire to simply be done with whatever chore you’ve given them — not necessarily to do it well, or even correctly; but to just be done. So this shirt could never seem to find itself properly folded and put away in a drawer. Instead, it lived on the floor or in the clothes hamper, meaning it frequently found itself in the washing machine and the dryer, for no reason other than the fact that neither of these children wanted to fold it and put it away. This resulted in a very soft shirt indeed. It only took about nine years. 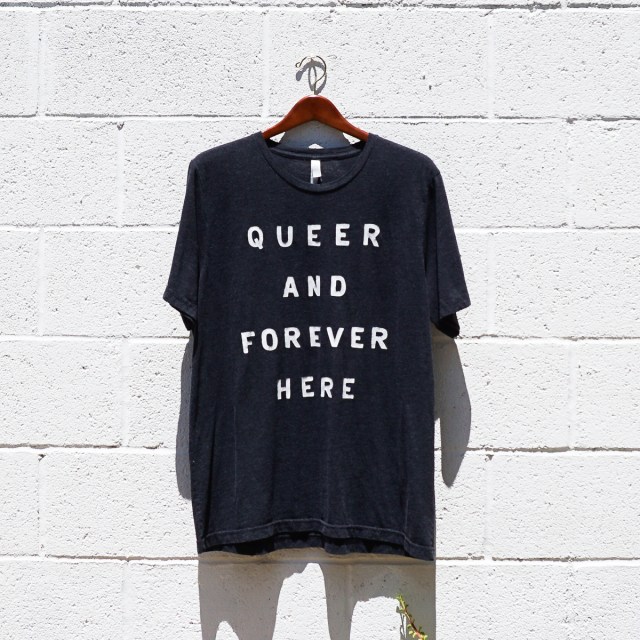 Belongs to: Megan, but she lets me wear it.

How it came to be in my home: Have you heard of A-Camp? It’s a little get-together we host in the woods every year, you should check it out. Kristin Russo (A-Camp co-director and orb of the purest light) had just printed these shirts for Everyone Is Gay and, since she was about to be surrounded by 300 queers, brought them with her to sell at camp. She is a smart businesswoman.

That particular camp was… a lot? The weather took it upon itself to punish each of us for living, and we took that punishment like champs. But at the end of the week, we were quite tired and raw and hungry.

That’s when Kristin gifted Megan with this shirt. Megan — who sort of doesn’t believe anyone notices her to begin with, and isn’t totally sure she’s not just in the way, and isn’t super positive that people consider her a friend — was thrilled to receive it. The shirt seemed to resolve those nagging worries she carried around, and left her with the undeniable truth of having a friend who did notice her and was glad she’d been there every day.

Worn stories: I wear this shirt at least three times a week. It’s like a security blanket, a housecoat, your favorite hoodie, your front door, a pillow, when someone brings you a croissant, summer sunsets. It reminds me that someone cared about a person I care about. It’s proof that we’ve built a queer family together (the royal we), and all around ourselves; that we’ve always been here and we’ve always been building. I love it.

(For a very limited time, you can get your own Queer + Forever Here shirt in the EIG shop.)