When I first saw the trailer for Viola Davis’ latest movie, The Woman King, I knew that I was definitely going to go see it. Directed by Gina Prince-Bythewood, it tells the story of the West African kingdom of Dahomey, located in modern-day Benin in the year 1820. Davis plays Nanisca, the general in charge of the Agojie, a unit of all-female warriors who were the protectors of Dahmoney instead of men.

(It’s been said that the Agojie were the inspiration for the Dora Milaje from Black Panther, and if you go see The Woman King, you’ll probably see the trailer for Wakanda Forever, which really adds another level to the whole experience.)

Dahomey is ruled by King Ghezo (played by John Boyega) and is fighting to protect themselves against the Oyo Empire. The Oyo are kidnapping Dahomean people to sell into the transatlantic slave trade (as has been talked about recently online, in real life, both the Oyo and the Dahomean were involved in the slave trade), and Ghezo is fighting to assert the kingdom’s independence and status as a formidable nation. Dahomean legend tells of the time where there was both a man and woman king who ruled together, and while it hasn’t happened in some time, due to the close relationship between Ghezo and Nanisca, it is believed that she will become the woman king because of her tireless fight against the Oyo. 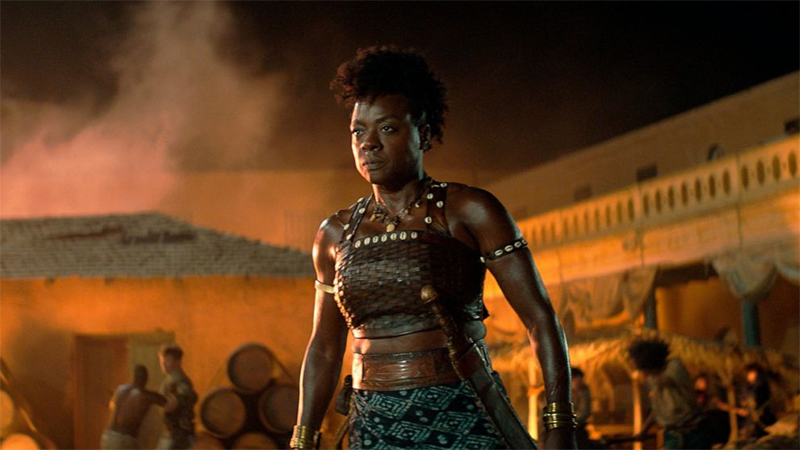 After a fight against the Oyo, Nanisca, aided by her two right-hand women Izogie (Lashana Lynch) and Amenza (Sheila Atim) begin to look for an train new recruits for the Agojie. Amenza and Nanisca have a history — they were prisoners together and share a strong bond as a result. She is very spiritual, much to the consternation of Nansica, who believes some of it to be ridiculous. Izogie is arguably the best fighter aside from the general. She has filed her nails into literal claws so that she can gouge out the eyes of the men she fights. But she’s also incredibly playful and fun. Among the new recruits is Nawi who becomes a central part of the plot going forward. A young girl who is sent to the king because she refuses to marry an abusive older man, she is the recruit who doesn’t believe in following the rules. Izogie takes her under her wing and they form a close bond.

Let me just say that I would fucking die for Lashana Lynch as Izogie. She is definitely the comic relief, messing with Nawi and showing an affinity for whiskey. She claims it’s the only good thing the Europeans brought to Africa, and I can’t say that I disagree. While none of the characters in The Woman King are explicitly queer, Izogie absolutely is. The Agojie are forbidden to have relationships with men and when Nawi asks her about it, Izogie alludes to not needing men because she has other ways to seek that kind of pleasure. (FWIW, I would let her wreck me with those talons.)

The Woman King has two unnecessary plot points that distract from the power of the story of the Agojie. And it sucks because they’re integral to the plot, so they’re hard to talk about without spoilers.

To further cement Nawi as a precocious rulebreaker, enter the character Malik, a mixed race man whose mother was Dahomean coming to explore his roots. There is a gratuitous scene of the two of them by a waterfall where she steals his clothes and while his abs are well defined, the setup for a potential romance was a total snooze-fest. I actually made snoring sounds whenever they interacted with each other.

I honestly don’t know how to talk about the other plot point I had issue with without giving away the biggest twist of the movie, so I’ll just say this. The plot twist was boring and predictable and it feels like they only added it to give Nanisca a capacity for empathy and self understanding and that is really upsetting. There were many other ways to give her depth, and this felt like a cop out. 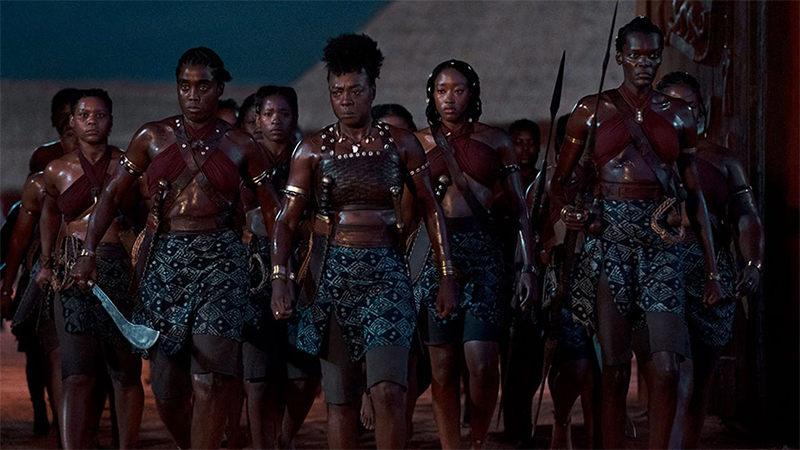 There’s a moment near the end where one of the Agojie is shot in the back to death by a European man who’s part of the slave trade and you see the whole thing. I won’t reveal which character because it’s another huge spoiler, but I have to wonder why the team felt it necessary to include the visual. The movie was filmed earlier this year, and after the conversations we’ve been having societally, it felt triggering and insensitive to include. As soon as I could see what was about to happen, an audible sob escaped from my throat and I began to cry. I’m not saying the character had to live, but they could have portrayed the death without us having to see it.

Despite my issues with the plot, I need to call out the incredible acting in the movie. Because holy shit was it amazing. We all know how good Viola Davis is. I would watch that woman do anything. She clearly sets the standard the other actors have to match, and they rise to the occasion, making it look easy. I’ve already talked about how I would die for Lashana Lynch. She was perfect. Sheila Atim’s quiet dignity made her captivating, but she also has this beautiful depth of soul and empathy. You can tell that Amenza would do anything for Nanisca — their bond goes deeper than their positing in the group. I also need to shout out Adrienne Warren who barely has any lines but still commands your attention every time she’s on screen.

Also, the fight scenes were EPIC. Viola Davis posted her workouts on Instagram while she was prepping and filming and whoa buddy. She makes kicking ass look easy. I would not want to cross her. There’s a showdown between the Agojie and the Oyo soldiers and it was so hot that I actually started to fan myself. There’s a moment when Izogie and Amenza tag team to kill a man with a staff and holy bleep. I legit had to roll up the sleeves of my sweatshirt. There was something very powerful about seeing a bunch of beautiful Black women all slicked up and kicking men’s asses. It made me want to go take a fight class.

I left The Woman King feeling like I could fight any obstacle that was in my way. Not only was I full of adrenaline, but I was filled with joy. Seeing a group of powerful Black women triumph fills me like nothing else can. Watching Viola Davis take a man down during hand-to-hand combat invigorated me, giving me a sense of power. But it was also those quieter moments that gave me warmth. Seeing the camaraderie between the women — the way they would playfully talk with each other, the tenderness of rituals like hair braiding, and the joy you’d see when they sang and danced. But also, the times where you really saw them showing up for each other reminded me that no matter what, Black women have each other’s backs. That was my biggest takeaway from the film. That’s what I’ll remember most.

Sa'iyda has written 14 articles for us.