On June 13th, the Pew Research Center published the results of their recent survey of 1,197 LGBT people. The survey, which was administered in order to “explore the attitudes and experiences of the people most affected by [the sharp increase in support for same-sex marriage and the two cases pending before the U.S. Supreme Court,]” confirmed many of the assumptions we’ve made about LGBT people.

A whole 92% of queers believe that things have gotten better for us over the past 10 years and will continue to improve in the next decade. Yet LGBT people are more likely than the general public (53% v. 39%) to believe that their own group faces a lot of discrimination. Other notable – if predictable – findings showed up in every realm from religion to politics to family structure. Unsurprisingly, the vast majority (79%) of the LGBT community identify as Democrats or left-leaning independents. Compared to the general population (which reports a 20% rate of unaffiliation), nearly half of LGBT adults have no religious affiliation.

And so with all this in mind, we’re going to wade into the somewhat less-expected findings in the study and figure out what, exactly, acceptance means. 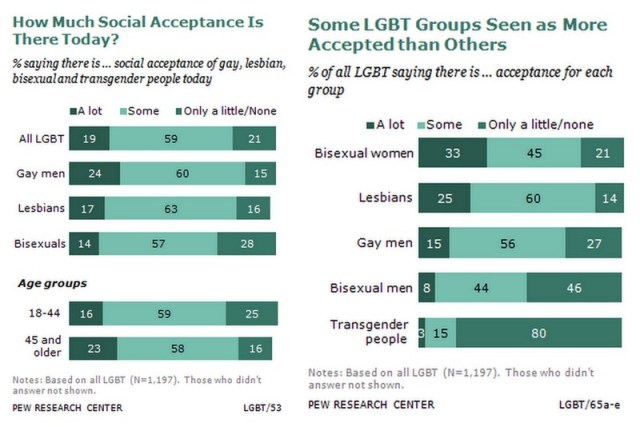 The idea of “acceptance” obviously goes much deeper than a number from a survey. In an early chapter of the results, the authors discussed how individual groups in the LGBT spectrum different in their perception of acceptance. Gay men are more likely to believe in widespread social acceptance, followed by lesbians and finally, bisexuals. Trans* people were notably absent from many charts included in the report. Any questions as to why bisexuals are more pessimistic or why gay men have a sunnier outlook on acceptance has to take more into account than just that group’s experience with larger society. Gay men, for example, reported verbal and physical harassment at much higher rates than gay women or bisexuals. When asked how much each individual group experiences acceptance, it was nearly universally agreed that bisexual women are the most accepted, followed by gay women, gay men, bisexual men and trans* people. 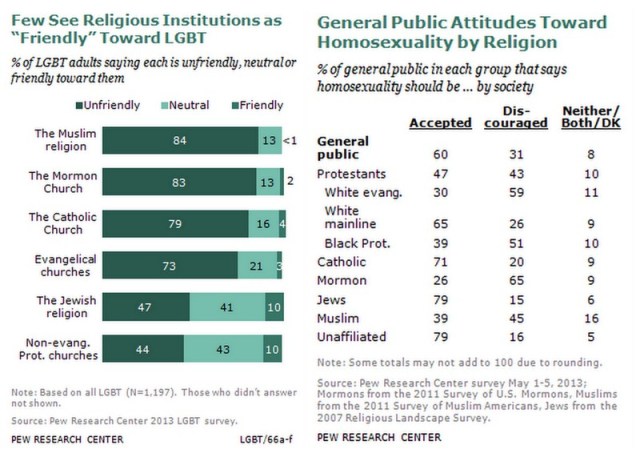 It should be emphasized that in no way are LGBT people and religious people separate groups; 51% of LGBT respondents identified themselves as belonging to a religion. Yet the disconnect between how members of different religions and queers feel about attitudes towards homosexuality could reveal that a bias against Islam and towards more normalized religious traditions is alive among LGBT people.

The connection between marginalized communities was highlighted in a series of questions about identity and community. 44% of respondents of color view their queer identity as very or extremely important, compared to 34% of whites. When discussing the positive or negative impact that being LGBT has had on his life, one respondent, an 83-year-old gay man, that that his identity had improved his life by “[making] it possible to better understand the problems facing blacks, women, others who are ‘closed out’ of society.”

This ability to empathize with other may explain why LGBT people are more likely to skew left than the general population. This segment of the population is more likely to be in favor of the Supreme Court, gun control and a larger government with more services. This last finding – in favor of big government – is especially interesting because, historically, the government hasn’t shown much support for LGBT people. Perhaps this is why so many respondents report satisfaction with the direction the country is taking.

As we continue to come out in droves, studies like this will find a place in a society that’s still learning to adjust to our presence. Not only do they show that we exist in every corner of the country, age-bracket, race and creed, they help direct creation of social policy that will bring protection of our rights and change in the places we need it most. Which, as a final note: 39% of respondents believe shouldn’t necessarily be marriage as it distracts too much from all the other issues.