Yesterday Pope Benedict XVI announced his resignation, sparking shock among his followers, speculation about successor by media outlets and feelings of extreme “so what” among non-Catholics. While many of us in the United States and Europe hear, if anything, news of closing Catholic schools and churches without priests, the news may in fact have more of an impact than we realize.

The current pope’s reign has meant a number of changes for members of the Church – especially liturgical changes such as showing “restraint” during the sign of peace and a new interpretation of the wording used during mass in the English-speaking world. But the reach of the pope goes beyond the pew. His example sets the tone for Catholics world-wide and with the world Catholic population staying at a steady 17% over the past 50 years, the number of Catholics is undeniably growing. In the global south in particular, the number of Catholics has soared.

As ThinkProgress has noted, the pontiff has used Catholic social teaching to encourage Catholics to work for a healthier environment with special attention paid to poor nations, a fair economy though unions and wealth redistribution, universal health care and immigration reform in the United States.

At the same time, though, his legacy has been harmful for women, LGBT people and other marginalized populations. In his last mass before he was elected pope, the  then Cardinal spoke against the “dictatorship of relativism.” In a way this homily set the tone for his papacy, which was markedly conservative and often criticized as being intolerant and even disastrous. Lacking the charisma and delicacy of his predecessor, Pope Benedict XVI often made missteps in his visits with leaders of and speech about other religions. In a 2007 visit to Brazil, he told Bishops that native South Americans had been “silently longing” for Christianity and that their conversion purified their culture. Though a week later he spoke about the “unjustifiable crimes” perpetrated to facilitate the conversion, the controversy was reminiscent of 2006’s insensitive remarks on Islam. When the Pope decided to remove restrictions on Priests who wished to say mass in the original Latin, his decree did not remove the inclusion of a prayer that calls to “deliver [Jews] from darkness.”

With over 20 million Africans living with HIV/AIDS and Catholicism on the continent having grown 33% from 2000 to 2010, the Pope’s position on condoms is especially relevant. In 2010, he moderated his stance by announcing that “There may be a basis in the case of some individuals, as perhaps when a male prostitute uses a condom, where this can be a first step in the direction of a moralization, a first assumption of responsibility.” This change opened doors for aid workers to reach Catholic communities, but his example of a male prostitue as a condom user prompted anger from officials and groups who were concerned that faithful Catholics would continue to refuse condoms out of a desire to separate themselves from immoral people (like prostitues) who used condoms. 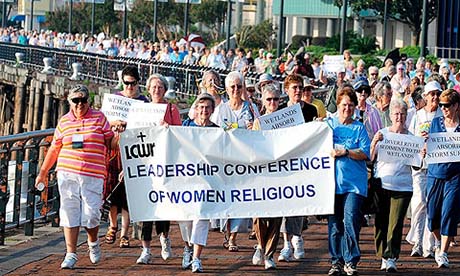 Although different, the pope’s legacy in the United States is just as palpable. His continued condemnation of birth control has lead to a standoff between American bishops and the Obama administration. And let’s not forget the American nuns. In 2012, the pontiff issued a reprimand to members of the Leadership Conference of Women Religious for promoting “radical feminist themes incompatible with the Catholic faith.” Finally, his take on homosexuality has been viewed by many as a step back. While Catholic doctrine is, essentially, “love the sinner hate the sin” with bigger words thrown in for good measure, the pope seems to view us more darkly. As the author of “On The Pastoral Care Of Homosexual Persons,” he asserted that, “Although the particular inclination of the homosexual person is not a sin, it is a more or less strong tendency ordered toward an intrinsic moral evil; and thus the inclination itself must be seen as an objective disorder.” The pope has also taken a few seemingly-unrelated opportunities – such his most recent Christmas speech – to reaffirm his opposition to homosexuality.

With a new pope expected to be elected before Easter, the question becomes who he will be. Potential cardinals include Angelo Scola, archbishop of Milan, Christoph Schönborn, archbishop of Vienna and  Marc Ouellet, the Canadian head of the Vatican’s office for bishops. With nearly 40% of the world’s Catholic population residing in Latin America, many are hoping to see a pope from somewhere outside Europe. While at this point it’s all speculation, one thing is certain: Pope Benedict XVI’s presence will be felt during the election. Though he won’t be directly involved in the decision-making, the pope appointed 67 of the 118 cardinals who convene to decide on his sucessor.

Though it’s unlikely that we’ll see much change from the Catholic Church after the election, it’s important that we have at least a passing familiarity with one of the most influential men on the planet. As queers, many of us find ourselves alienated by conservative religion and struggle to see its impact on our daily lives. Yet by educating ourselves about what we don’t understand or believe and seeking out conversations with queer-uninformed people, we find new allies who can work to change the church from the inside out.