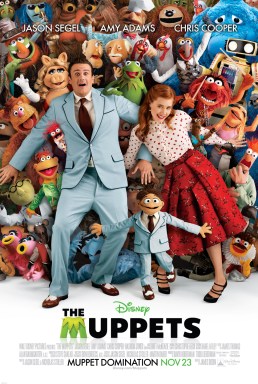 Aside from the fact that Jason Segel and Amy Adams‘ faces both make me want to take a 30-year nap, The Muppets movie was totally adorable and entertaining and I loved every minute of it.

Before I go on, I should admit that for me, speaking ill of the muppets is like using the Lord’s name in vain. But I guess that’s the thing about the Muppets — I never really have to speak ill of them ’cause they rarely fuck up. In 1976, Jim Henson developed an unforgettable motley crew of dynamic silly-looking characters who were just as funny/relevant then as they are today.

Furthermore, this franchise, along with Jim Henson’s other work and Sesame Street in particular, was so consistently groundbreaking in the ’70s/’80s that it doesn’t require a new-fashioned overhaul to be made relevant to contemporary culture. As a lifelong Muppets fan, I feared the film would be rendered unrecognizable by modern cinema’s inability to produce any kind of revival or children’s film without involving photo-realistic CGI humans, 3-D vision, edgy/sexy costuming and flashy-but-flat new characters. The Muppets, co-written by Jason Segel and Nick Stoller with help from the Muppeteers, did none of those things (at least not noticeably). If this movie had a subtitle, it would be “Now More Than Ever.”

Jason Segel plays Gary, the older brother to Walter, a muppet raised in a world of humans whose entire life changed when Gary and Walter discovered The Muppet Show back in the 70’s. That’s when Walter learned that he wasn’t alone in the world. There were other people out there just like him! If you’re gay, you probably can relate to that part.

Via a series of ensuing plot twists and story arcs, Walter learns that a greedy asshole executive (played by Chris Cooper) is moving to buy the long-abandoned Muppet Studios to exploit the land for oil.

Along with Gary and Gary’s girlfriend Mary (Amy Adams), Walter tracks down his hero Kermit the Frog and encourages him to re-assemble the muppets to put on a show and save the theater. They only need to make $10 million dollars in a week! YAYAYAYAYYYY! 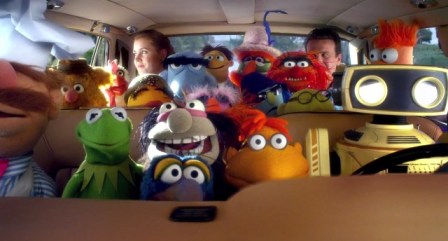 Kermit and The Gang have rotten luck pitching their show to television executives, however, due to the repeated movie-fact that “The Muppets aren’t famous anymore.” That’s the film’s hook, and it’s kinda funny. Not ha-ha funny, but weird-funny or not-really-true-funny, because what this film and the hype around it makes abundantly clear is precisely how timeless and effortlessly adaptable the muppets are.

As a hugely successful series of YouTube musical numbers demonstrate, I realized while watching the film that the muppets are the rare entertainment franchise that works just as well — if not better — in new media as it does in old. Fast-paced, cleverly-lyric’ed, hilariously-choreographed musical numbers starring cute animals and random celebrities? Um, yeah, that’s more or less exactly what delights The Internet. The Muppets did the Internet before the Internet did the Internet.

Most grown-ups will note that the film is almost entirely meta, and they will appreciate the 70s/80s/90s nostalgia, inside jokes and fourth-wall-playfulness scattered throughout the story. I might just be saying this to make myself feel better, but most grown-ups might also find themselves misty-eyed to see their childhood companions reunite or oddly devastated by the idea that in the fantasy world of this movie, Muppets are anything besides ridiculously famous and loved by all. 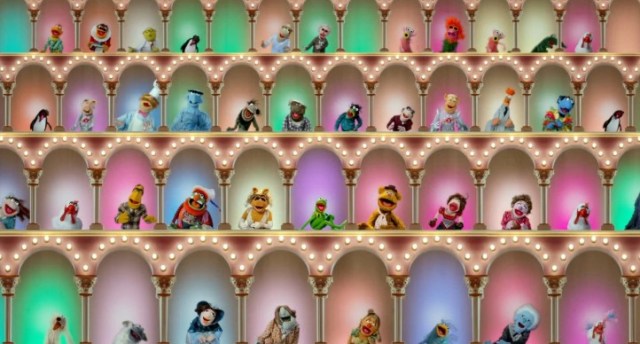 Growing up I wasn’t allowed to watch any movies or television that involved violence, sexism, commercialism or otherwise unprogressive behaviors and ideologies. This eliminated almost everything about real human beings (besides the eager young mathematicians and scientists of Square One and 3-2-1 Contact). So I watched a lot of Sesame Street, Shalom Sesame, Fraggle Rock and Muppet Babies. The first prime-time sitcom we ever watched as a family was Dinosaurs, a show featuring anthropomorphic characters co-created by the Jim Henson Company. Although the late-90s revival show Muppets Tonight never really caught on like the original program, I loved the hell out of it. On a special trip to Disneyworld, my brother demanded that we spend his birthday watching Muppetvision 3-D over and over (it was glorious!). I think my parents just really trusted Jim Henson. 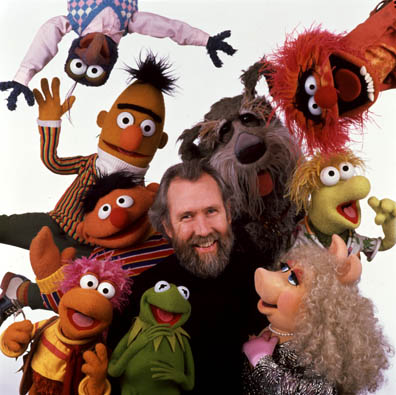 And the fims! OH THE FILMS! The Muppets Take Manhattan essentially established a blueprint for the rest of my life, and every time I watch it there’s something about it that rings true all over again but in a different way. Now I see the socioeconomic conflict between the corporate suits of Ocean Breeze and the artists of Manhattan Melodies. Now, watching the muppets forlornly write Kermit with wildly exaggerated stories about their new lonely miserable lives, I see the self-conscious posturing we all do after college to make our lives seem better than they are.

So I shouldn’t have been surprised to find myself relating to The Muppets more than I have to any new film in recent memory. Plucking a diverse group of talented characters together to create something creative and beautiful and ideally profitable — but only so the work can continue, not because we dream of riches? Check! The pressure Kermit feels to meet the expectations of not only his audience, but his friends and fellow creators? Mhm. Relying against all odds on the thin hope that “if you build it, and it’s really good, they will eventually come”? Indeed. Hello, this website! 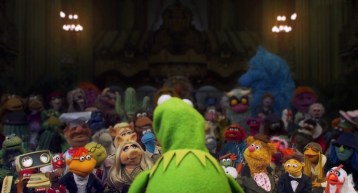 Which is just to say that there’s plenty to love here for THE WHOLE FAMILY, as there always is whenever Muppets are involved. Fun cameos abound, including John Krasinski, Sarah Silverman, Selena Gomez, Neil Patrck Harris, Jack Black and a triumphant performance by Zach Galifianakis.  It’s no Muppets Take Manhattan, but what is, yannow? Above all, it’s really fucking funny and everyone onscreen seems to be having so much fun that it’s hard not to feel the same.

The Muppets isn’t perfect: the new songs, while cute when accompanied onscreen with boisterous choreography, don’t pack the same punch as the old songs. Kermit the Frog is, at times, even for Kermit, a TOTAL DEB. Nobody needs to see Jason Segel in high-definition but I suppose he deserves the role having written the script himself. If I ruled the world, Gary would’ve been played by Neil Patrick Harris, and Mary by Lea Michelle or Amanda Seyfried or something. Actually, seven or so years ago it would’ve been the perfect role for Lindsay Lohan.

Ultimately this movie is a feel-good film that reflects a growing trend in American media (see also: Glee) to prioritize family, friendship, love, self-empowerment and dream-following over money, status and power. I think Jim Henson would approve.