After years of development and speculation, non-announcements and actual delays, No Man’s Sky is finally really here. I have never been more hyped for a game in my entire life, and I am a person who regularly plans vacation days around game releases.

So, what even is this game? The short answer is: No Man’s Sky is a survival game set in a procedurally generated sandbox universe. I didn’t really have any idea what “procedurally generated” meant before I started obsessively reading everything I could get my hands on about this game, and to be honest I still don’t totally get it, but basically: procedural generation is math. In practice, it means that instead of designing every inch of the game world, the developers create the building blocks for that world, then write an algorithm to actually put it all together.It allows for larger game worlds, since the developers don’t have to curate every inch of the map, and it allows for generation of randomized content.

It’s not new technology. Probably the most recognizable example of a game with procedurally generated worlds these days is Minecraft, but it’s been a part of game design basically forever. What procedural generation means for No Man’s Sky, and why we’re talking about it in the first place, is that it enabled an indie studio of about 15 people to create a game world of more than 18 quintillion planets.

There are more planets in this pretend universe than there are grains of sand on the actual earth. Think of how huge Skyrim seemed the first time you stepped into that world. Now imagine it 18 quintillion times as big. You can’t! The number is unfathomable, it’s too big to understand. But this is even bigger than 18 quintillion Skyrims because Skyrim was just a map and these are legit PLANETS. (And remember when they were like “See that mountain? You can GO THERE”? No Man’s Sky is like that, except with every star in the sky.) Every planet is unique, with its own procedurally generated terrain, flora and fauna. The potential of this thing just sets my imagination right off.

So I am a very simple person; the scale of this game was enough to get me to pre-order, no questions asked. But throughout the game’s development, very reasonable people have been asking this very reasonable question: What do you do in No Man’s Sky? I’m about 10 hours into the game, and have barely scratched the surface, but here are my impressions so far.

Everybody’s game starts out the same, but also totally different. You wake up next to your crashed ship on a planet on the outer fringes of the galaxy. Everybody starts out on a different planet, with conditions ranging anywhere from Hoth to Tatooine (each planet has only one biome, to encourage players to get out and explore instead of poking around on one planet forever). No other human has ever seen this planet, and probably nobody ever will. It’s the frontier for real. You’ve got a spacesuit and a multi-tool (essentially a raygun), and your first task is to gather materials to repair your broken ship and (also to keep your life-support and multi-tool in working order.) 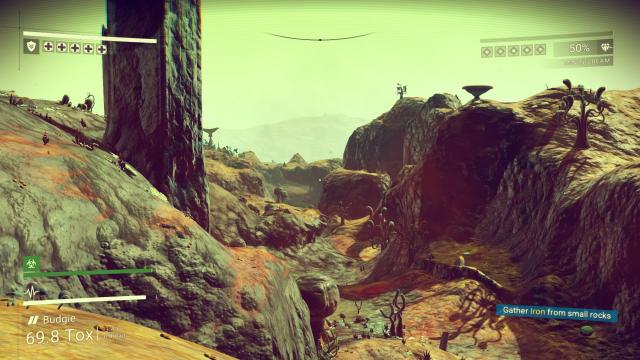 My spawn planet, Budgie, named after my cat.

I think I got relatively lucky. My spawn planet was hot and toxic, but rich with resources and some pretty cool animals (I was gonna make a “Just like I like my women!” joke here, and then I wasn’t, but then I realized how perfectly this describes Martha Stewart so it’s not even really a joke anymore.) Every new thing you discover (star systems, planets, landmarks, flora and fauna) can be renamed and uploaded to the game’s central database to earn in-game currency. I have mostly named things after my cat so far, you can feel free to do the same. Her name is Budgie. More important than what you name them, is that when you discover things, you are truly discovering them. You are the first person to be where you are. The developers don’t even know exactly what’s out there, you’re teaching them about their own game. And even more importantly, you can feed the animals and they make cute noises and might dig up treasure for you.

Okay though. It’s not perfect. The plot is pretty ethereal; you find bits of lore and scraps of language here and there but there isn’t a story really. You are trying to get to the center of the galaxy, and getting there is mostly a matter of survival and resource management. It’s actually weirdly simple. Find resources to repair gear, find upgrades, find resources to build upgrades, find more resources to fuel your hyperdrive to jump to a new system, repeat repeat repeat. And that, I think, is where the love it or hate it line is going to lie.

For all the ways this game is extraordinary, the mechanics are basic as hell. The core gameplay is practically identical to the mobile game Out There, except, like, you actually see and do everything instead of clicking on a text command. It is repetitive. Inventory management is a chore until you start upgrading your carrying capacity. The controls are not entirely intuitive (sprint mapped to R3? whyyyy?) The shooting is clunky, and there’s maybe not enough of it for a lot of people. It’s not multiplayer (everybody is playing in the same universe at the same time, but it’s so big that you are rarely, if ever, going to run into another player.) The tutorial hints are somehow both obtrusive and unhelpful. These are legitimate complaints. Where most games use their world as a backdrop to story and gameplay, No Man’s Sky is using very simplistic gameplay as a gateway to get players into their worlds. It’s not going to hold up for every kind of player, but I’m unabashedly in love with it despite its flaws, because it’s FUN.

The loneliness, in my opinion, is beautiful. Knowing there are people out there somewhere but you might never meet a single soul. It’s relaxing and it’s sad, man. Just you against the universe. It feels like an honest to goodness adventure. And I guess having to climb another hill to get plutonium for the hundredth time can sometimes seem like a drag, but then you’re looking out over the ridge at a ridiculously gorgeous view, or a giant bear-crab you can name after my cat, or a crashed ship WAY COOLER than the one you’re currently pushing that you can repair to working order. You don’t even really have to climb the damn hill, either, you have a freaking jetpack. You can fly your ship around the surface of the planet to get around faster, but if you find a planet where the Sentinels (robot park rangers, kind of) aren’t too aggressive, you really want to take in as much on foot as possible. 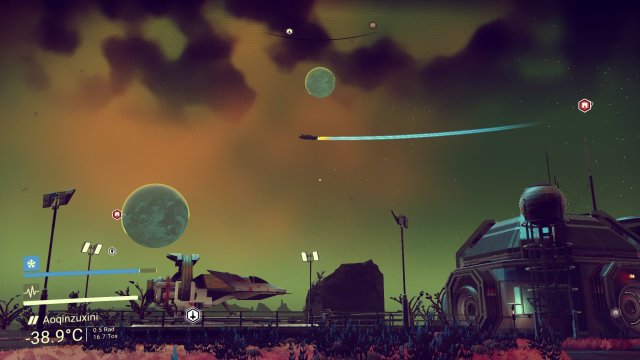 That’s how you’re going to find animals, and just SEE everything. The visuals of this game are remarkable. The aesthetic is based off ’70s sci-fi book covers, and they absolutely nailed it. Planets are closer together than they would be in real life, which makes for quicker travel (but it does not take away the feeling of vastness of space), but also gives you beautiful skies with nearby planets hanging above you just begging you to fly off and explore them. And you really can. Just get in your ship and point it upwards. Seriously, just wait until the first time you take off into space and shoot a hole through an asteroid. It’s possibly my favorite part of the whole game. Fighting off space pirates (so awesome), or trying to become one yourself (bad idea, whoops). My goodness. I feel like I’m Starbuck out there.

I think the best way I can try to recommend No Man’s Sky is to go back to the Skyrim comparison: After the main quest is done, if you put the game away and got on with your life, you will probably get bored with this game pretty quickly. But if you kept playing because you wanted to explore every cave and collect every cheese wheel, I am sorry to tell you that I have seen no cheese wheels so far, but there are PLENTY of caves. And apparently the devs are even working on an update that will let you build bases in case you get tired of being untethered in an endless universe. Probably it is too much to hope that they will add Mjoll the Lioness to live in your space house, but hey, I already told you it’s not perfect.

No Man’s Sky is exactly the game the developers promised. It is a weird little indie game that is bigger than the entire world.