One of the reasons I love Dungeons and Dragons as a queer person, and love playing it with my queer friends, is that it celebrates the weirdo. The heroes of D&D aren’t the princes or the queens, the heroes are usually a ragtag group of misfits who found each other through choice or chance and work together to take down whatever evil force plagues them. Characters grow and learn and bond and change and it’s celebrated and rewarded at every turn. And it seems The Legend of Vox Machina will be no different.

There’s something about a passion project. While it’s possible for brilliant creators to make something great that’s just a job to them, the specialness of something that was made by people who love and believe in the project is palpable. And Critical Role has always been a passion project. It started as an at-home D&D game that evolved into a small stream that evolved into an entire media empire. But the entire time, it has been created by a group of friends with a passion for storytelling, and that’s the foundation that has stayed strong as the shape of Critical Role shifts and grows from just one actual-play stream to a creation hub that includes one-shots, other gaming streams, interviews, D&D tip videos, gaming manuals, tabletop games, puzzles, and, now, an animated series. 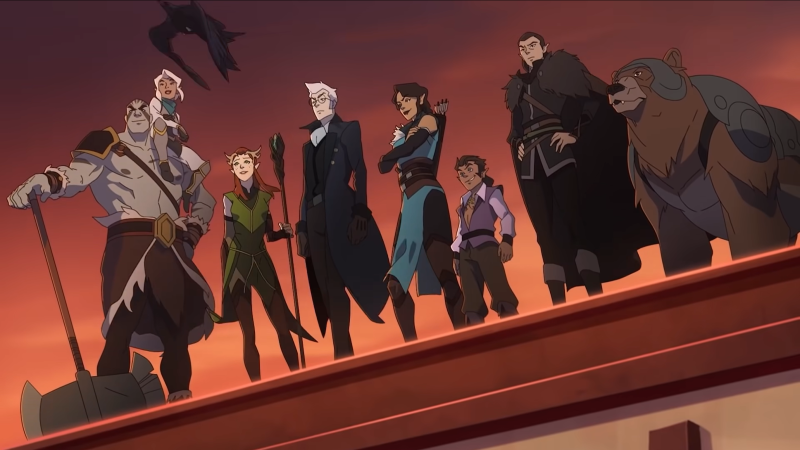 This decision to turn one of the stories (the first, in fact) this group of nerdy-ass voice actors brought to life into an animated series came at a great time for adults-only cartoons. Bojack Horseman, Big Mouth, Harley Quinn and more have proven that while some made-for-kids cartoons are still healing our inner child with married gems and queer witches, grown-ups want cartoons made for us, too. It allows for more magic and surrealism without a Game of Thrones budget, and it’s especially fitting for a story that started as an arc in Dungeons & Dragons. And, what’s great about turning it into a series is that Matt Mercer had already create a diverse group of characters, but now they can be played by a diverse group of actors, instead of them all being played by just him, as is the nature of being the Dungeon Master. And, in fact, talking about the cast is a great place to start.

Spoilers specifically for the first three episodes of The Legend of Vox Machina afoot!

The show is already queer because of the cast, both in queer characters they’ve played and also some of them being queer themselves. As we know, the main cast is all present, including Ashley Johnson who has played iconic queer characters like Ellie in The Last of Us and Yasha in Campaign 2 of Critical Role, plus Marisha Ray who played lesbian badass Beau in that same campaign. And Laura Bailey who has voiced so many characters I’m sure at least one of them is queer. (Jury’s still out on Vex.)

Then, for guest stars we have Indira Varma (Ellaria Sand, Game of Thrones) and noted bisexual Stephanie Beatriz as Lady Allura and Lady Kima. 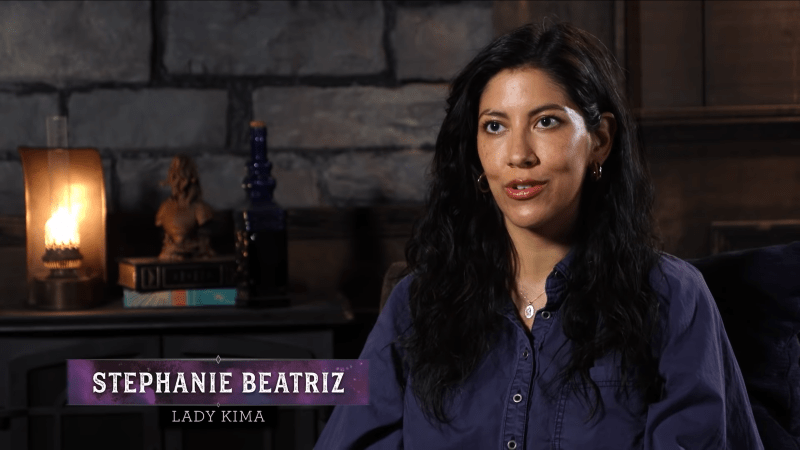 I know this makes sense especially on the heels of her voicing Mirabel in Encanto but it still felt like worlds colliding in the best way.

Other well-known actors from shows with queer characters like Felicia Day and David Tennant are present in the cast list, as well as non-binary actors playing non-binary characters, like Stacey Raymond as Bryn.

I know I basically just reiterated the IMDb to you but it’s a very exciting cast list! I’m very excited.

The show itself lets you know it’s not for children in the very first scene. It starts out looking like a typical high fantasy story, but the “heroes” are immediately killed in a storm of blood and cursing, because they are not OUR heroes, they are simply the tool with which we’re told that the stakes are high.

We are then introduced to our REAL heroes, who are…not looking very heroic. In fact, they are a damn mess, causing a ruckus, down on their luck, or, in Scanlan’s case, mid-fuck. But their luck turns around when there’s a call for mercenaries to solve a problem of a mysterious beast, and despite not having the best reputation in the town of Emon, they’re hired for the job.

They spend the first two episodes discovering that there’s a dragon to slay, hyping themselves up to slay the dragon, and then, playing to their strengths and working together as a party, slaying the dragon.

One great thing about these first few episodes is that they are full of newness, whether you have never even heard of Critical Role and just stumbled across the show on Amazon Prime, or if you have seen all eleventy billion hours of CR content, because they cover story elements that were never shown on stream. And in fact, I think the way they handle all of it, the character intros, where we entered in their journey, the worldbuilding; it’s all set up to be just as fun for newcomers and veteran Critters.

That said, there are also plenty of little nods to those of us who are more familiar with the stream, from little details like the way Keyleth does some of the same arm motions as Marisha when casting spells, to bigger winks like the book Tusk Love being available in Gilmore’s shop, or the poster of the Ruby of the Sea in the secret room they found. They also immortalize running gags from the stream, like Vox Machina always running into trouble with doors, their odd choice of safe word, etc.

The third episode kicks off a story arc viewers of Campaign 1 will be familiar with, now that the Briarwoods have made themselves known, but with the ability to give Percy flashbacks, and this new format in general, (And I promise there’s more queerness to come but I can’t tell you more without spoiling you.)I have a feeling we’ll continue to experience a fun mix of familiarity and newness in the coming episodes.

I think it would have been easy to scrap any similarities to D&D when they shifted to an animated series, but the game is still coloring the characters and stories, the same way it did as an actual play TTRPG stream. Keyleth, the druid, can manipulate nature and turn into animals, Vex the archer has her trusty bow and her best friend Trinket the Bear, her twin brother Vax is a rogue who sneaks off to investigate, Pike the cleric heals her friends when they’re hurt, Grog the barbarian is a gentle giant who channels his rage in battle, Percy the gunslinger is calculating and precise, and Scanlan the bard is often busy charming people or distracting them with a song. I like that, so far at least, the limits put on them by the game are also sometimes in play, like how Pike was “too drained” from the first battle to heal the injured child they found, which is how being “out of spell slots” in D&D would translate to “real life.” To me it’s the perfect combination of D&D and animated high fantasy and I can’t wait to see what other little aspects of the game flavor and guide the story.