Comic Con is always overwhelming, the good and the bad. I don’t have a ton of experience with it; I’ve only been to NYCC twice (last year and this year), but the vibe was so drastically different this year that it was hard not to notice. At first, I thought it might just be me; I’m going through sort of a rough time in my life right now. But then I saw these two tweets from Kate Leth:

Now maybe I had the rose-colored glasses on last year, that’s totally possible, it was my first NYCC. But y’all. I do not remember shit like this last year. So I spent the last day of NYCC asking around at the queer booths to see if they were noticing anything out of the ordinary.

At Geeks Out‘s booth, one of the lovely volunteers showed me a new shirt of theirs: it reads “Alan Turing Fought Nazis With His Big Gay Brain.” Specifically, he pointed to the word Nazis. “They’re out in force this year,” he said.

I went over the LGBTQ HQ booth and talked to Jay Justice, a badass queer Black disabled cosplayer who you should definitely follow on Twitter. She said she was so used to oppression that she hadn’t noticed anything different than cons past. But then she started listing stuff: how one person tried to put anti-choice literature on their table. Or how one white dude tried to hijack “Heroes of Diversity” by standing up at the mic and asserting that women of color are stealing comics from white dudes (Justice and the audience just shut that right down). Or how a trans woman came to LGBTQ HQ after someone had lifted her skirt in front of everyone while playing a shooting game (and y’all, NYCC did not kick the offender out as far as we knew). [UPDATE: Justice just messaged me on Twitter with some corrections. Apparently she wasn’t playing a shooting game…she was shooting cosplayers. Like with her camera. And I don’t understand slang, apparently. Also! She didn’t head to LGBQ HQ after—Justice met her elsewhere.] As Justice completed her list, she looked thoughtful. “I guess it is worse this year,” she said. 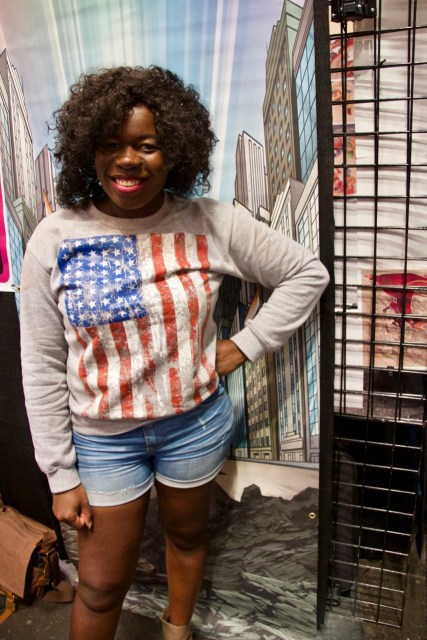 I noticed a difference in the cosplay, too; so much less queer. I couldn’t find a single set of lady Ghostbusters until the last day (the one set I did find was amazing). Even with two queer booths on the show floor this year. Even with all the strides made. Those who followed or covered GamerGate won’t be surprised at any of this — GamerGate enabled the rise of the internet-savvy Nazi. Nerds are a massive part of modern white nationalism. It’s not surprising that the show felt weird this year.

At the same time, tons of queer stuff happened at Comic Con and it was glorious. Like I said, not just one gay booth on the floor this year; we got 100% more gay booths (two, but still). Panels! Cosplay! Comics! I could pee! I don’t remember gender-neutral restrooms from last year, but that certainly doesn’t mean they weren’t there? Regardless, I’ve been having an increasing amount of trouble peeing since Trump has emboldened people to harass folks in public bathrooms. The gender-neutral restrooms were a safe place for me to go. I even hid out there for a hot minute when the crowds got overwhelming. 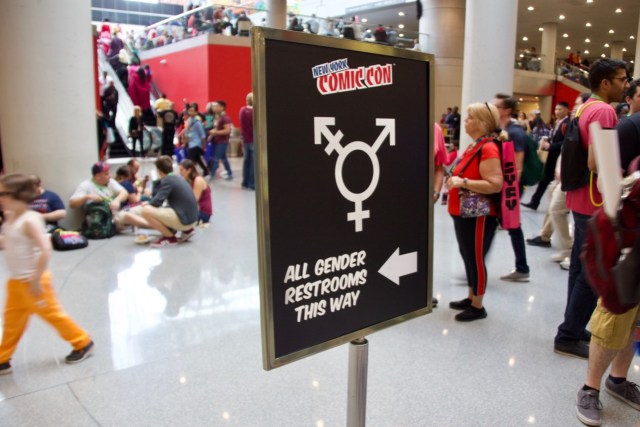 I don’t want to erase the massively amazing gay stuff I found just because I heard slurs on the floor (oh yes you bet I did). The gay nerds are doing the work out here and it would be awful not to cover that. And yeah, I do mean doing the work. I know it’s just nerd stuff, I know it’s just comics. But if the pipeline to White Nationalism includes nerd culture and the nerds who hang out in these spaces, it is more important than ever before to be visible in these spaces, to be making art and engaging in discourse that reflects the world around us.

So without further ado, here are the very queerest things I happened upon at Comic Con this year. 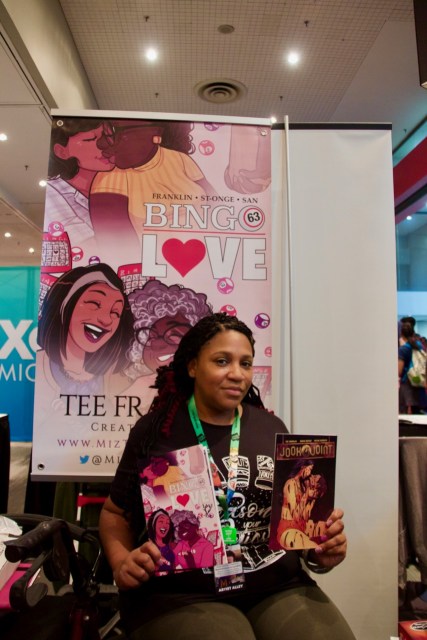 Bingo Love is a LGBTQ romance story that spans over 60 years. A chance meeting at church bingo in 1963 brings Hazel Johnson and Mari McCray together. Through their formative years, these two women develop feelings for each other and finally profess their love for one another.[…] Decades later, now in their mid 60’s, Hazel and Mari are reunited, again at a bingo hall, and their love for each other is still alive. Together again, the sexagenarians decide to divorce their husbands and live the rest of their lives together as wife and wife… despite the objections of their children and grandchildren. 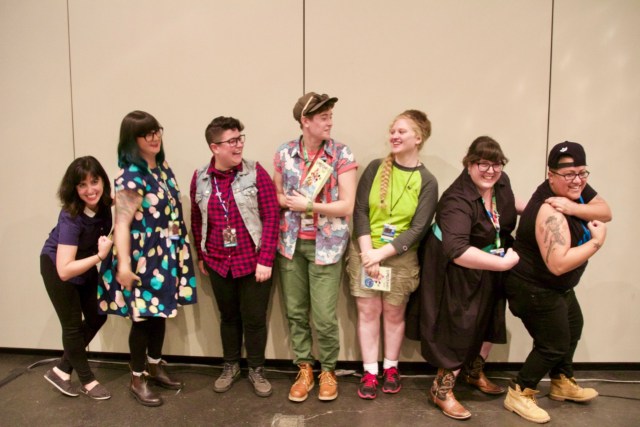 The panel participants hamming it up with two awesome cosplayers.

It truly was friendship to the max at this panel — despite some technical difficulties, the audience remained in high spirits by telling jokes and reciting the Lumberjanes pledge. Our very own Gabby Rivera was up there talking about her experience writing the Lumberjanes 2017 special, Faire and Square and had some really amazing, smart things to say about what inclusive writing means. It’s not just characters that mirror the diverse readership — it’s what sorts of culture (pop or otherwise) those characters are referencing as they speak. For those who haven’t yet read Faire and Square, there’s some serious telenovela love going on in there.

The panel also featured Mariko Tamaki and Brooklyn Allen, the co-conspirators creating the first ever Lumberjanes illustrated prose novel, Unicorn Power. So. In case you wanted more Lumberjanes, here’s a way to ingest some more Lumberjanes. 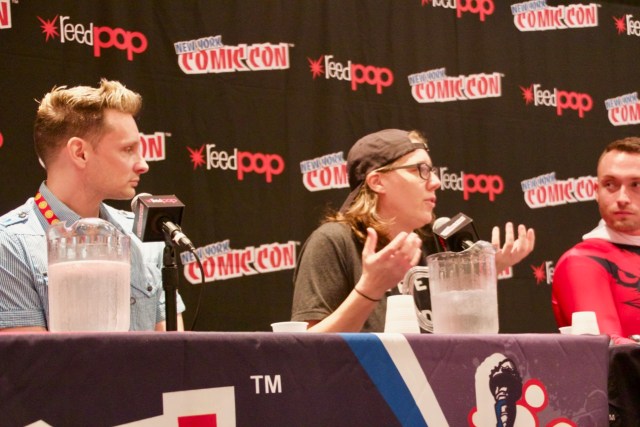 This is perfect human Heather Hogan. Likely she is talking about Carol.

This panel on the state of queer pop culture was very… eclectic? That might be the word. At times it seemed strange and disjointed, trying to bring so many aspects of pop culture together at once. But despite its broad scope, the panel included bright shining constellation Heather Hogan who was a perfect human, as usual. Hogan brought levity to the panel and also made sure we all went home and watched The Bold Type, as is her custom.

This is Debby and Peggy. Peggy is Wonder Woman.

These two were just being cute, so I stopped them and took a photo of them being cute.

A wild Molly spotted at the Lumberjanes Panel

Embodying the true spirit of Marceline.

I DO NOT CARE THAT THE SANDERSON SISTERS AREN’T QUEER I CLAIM THEM HERE YOU GO HAPPY HALLOWEEN.

I’m paraphrasing this cos player, but she said something like, “she’s my perfect cos play. Super awkward and boy crazy.”

These are those Ghostbusters I mentioned! The ones I saw on the last day!

Look At All These Queer Creators! 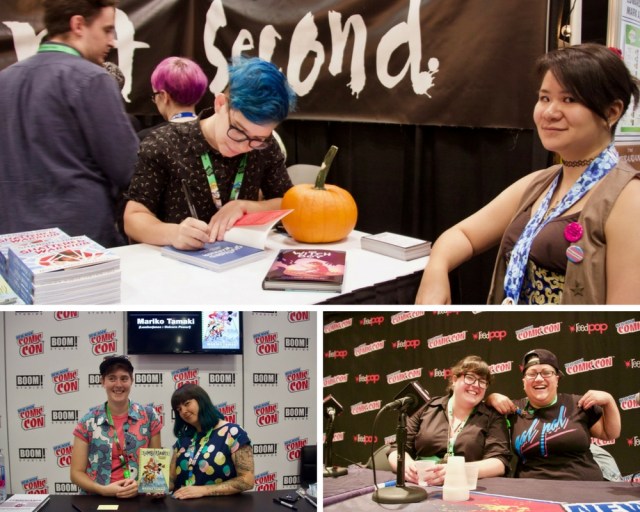 And I didn’t hit even half of them! Mallory Ortberg apparently spoke and I missed it? Rebecca Sugar was there and I missed it. Hell, Kate Leth was tweeting so I know she was there and y’all, I missed her too! Ugh. Guess I’m gonna have to go back next year and photograph their amazing selves I GUESS TWIST MY ARM I GUESS.