“To truly love another person is to accept the work of loving them is worth the pain of losing them.”

You know that feeling, when you’ve loved being immersed in a show so much that when it ends, you feel a sense of loss? Like getting ripped out of a dream you were enjoying, or coming back from vacation? Or I guess, more accurately, when you’ve been having a really good conversation and/or cry with friends and then it’s time to go home. That’s how I felt when I finished The Haunting of Bly Manor. Like I wasn’t ready to leave it. But I do think the pain of losing it was worth the work of loving it. Especially considering the only work required was pressing play on Netflix. And keeping alert for the secrets lurking in the shadows.

I won’t lie, I was nervous about Bly Manor, because The Haunting of Hill House is one of my favorite seasons of television of all time. How could any of these characters live up to a lesbian empath? Sequel movies are rarely as good as the originals, and my only other experience I could think to compare it to — same creators, same general concept, different story — was American Horror Story, and while some (like Coven and Hotel) were solid, no other seasons ever came close to being as good as the first, including the second. And some seasons are downright bad.

But I should have known better; writer Mike Flanagan has proven trustworthy far more often than Ryan Murphy has. It was unfair to use that metric. So while it took me a hot second to adjust to all the Crains having European accents and whatever midwestern (??) sound was coming out of sweet Nellie’s mouth, by the end of the first episode Victoria Pedretti was Dani to me, and I was excited to watch her go on this creepy adventure.

The story follows a similar format to Hill House in that to paint it with broad strokes, you can say it’s a story about a haunted house and its inhabitants new and old. We meet the current residents through Dani, as she’s been hired by Uncle Henry to be a live-in nanny for the youngest Wingraves, Miles and Flora. Uncle Henry doesn’t live at the manor, but they do have three adults with them: the housekeeper Hannah, the chef Owen, and Jamie, the resident lesbian, and the gayest gardener to ever garden.

The season does what Mike Flannagan and his team does best: takes a ghost story and seamlessly weaves a love story into it. The first season’s love story was between the Crain family, but this one is the found family created in the elegant kitchen at Bly Manor. It’s never just spooks for spook sake, though there are plenty of things that go bump in the night (and sometimes in the day, which is extra unsettling). And yet, the biggest villain on the entire show is an entitled cis white straight man. The heroes are two au pairs, two young women from different timelines who care deeply about their charges. There are mysteries within mysteries but it never feels too bogged down for me. Every twirl of the music box ballerina, every click of the lock, every turn of the screw puts another puzzle piece into place and makes the picture a bit clearer.

Also, did I mention that Jamie the gardener is gay gay gay? A keen gay eye would be able to tell she’s a lesbian by the way she talks and sits and looks, and I would have said she was gay even if the show never did, but it does. It sure does.

Hopefully by now if you haven’t watched the season yet, I’ve convinced you. If not, feel free to keep reading, but I must warn you, we’re passing the point of no return. The rest of this review will be full of HARDCORE SPOILERS right down to the very last frame of the season. So now’s your chance to bookmark this, go watch all nine episodes, and then come back.

No seriously, be careful. The night is dark and full of spoilers.

I had decided Jamie was gay from the moment I laid eyes on her. That was never a question for me. Between her general posture, as mentioned, and knowing Mike Flanagan isn’t afraid of a little queerness (see: his bisexual wife Kate Siegel’s lesbian empath Theo Crain in Hill House) but I kind of assumed she’d just slip that she was a lesbian into conversation, or at some point she’d mention an ex-girlfriend, or that Kate Siegel would stroll in as her current girlfriend…maybe both because of ghosty shit.

In episode four, we learn about Dani’s backstory. About how she was engaged to a man she didn’t love because he was her best friend and it was the ’80s and that felt like a safer choice than looking too closely at the lesbian feelings lurking in every corner, including but not limited to at the fitting for her wedding dress. Before she could go through with the wedding, she broke things off with her fiancé, but during their fight, he got hit by a car and died.

The image of him haunts her, in every mirror she looks into, and when she starts to realize that those feelings that she thinks got her fiancé killed are starting to creep back up as her heart flutters every time Jamie calls her “Poppins” she sees him more and more. 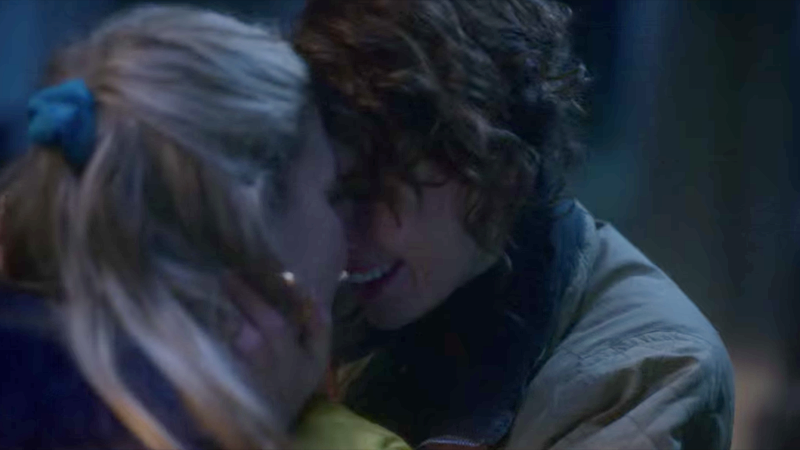 This scene haunts me but in a good way.

When Dani first takes Jamie’s hand, Jamie’s reaction is the same as mine. She is pleasantly surprised and even says, out loud to Dani, “Who the hell knew.” (I imagine finding a girlfriend when you spend all day at a creepy murder mansion with plants is a bit tricky, so when a wild lesbian appears, it’s perfectly splendid.) Dani’s visions of her fiancé grow stronger until Jamie’s beautiful monologue about moonflowers and how the best things are worth the hard work. Dani realizes she can’t be afraid anymore; her being a lesbian isn’t the reason her ex died, her gayness isn’t a scary thing. She’s found someone she can love completely, who loves her the same. And after she finally lets go of that fear, after she lets herself be loved by Jamie, Dani stops being haunted by her past. 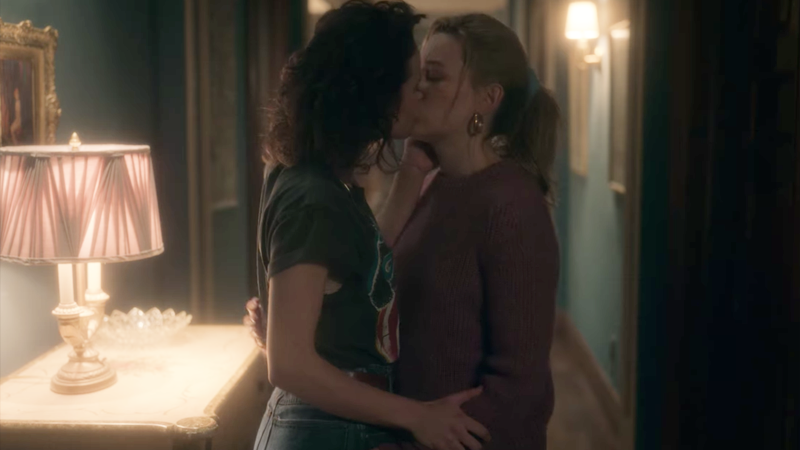 Their HANDS in this scene.

Though there are far scarier things than emotional baggage in Bly Manor.

I won’t lie, at first I was sure there was going to be a catch. But that’s because I had wanted to avoid spoilers so I didn’t realize how many women and/or queer people were involved behind the scenes. In fact, five of the episodes are written by women and one by genderqueer writer Laurie Pennie. And it shows in the way each of these women are written, and by the way this queer love story is cared for. Plus, T’Nia Miller, who delivered a showstopping performance as Hannah Grose, is a lesbian in real life.

Because as we learn by the end, the love story between Dani and Jamie is sort of the whole point. It’s the reason the story is being told, it’s the emotional crux of the entire season. The finale is entirely about them and their love, and it’s beautiful and complicated and tragic and NEW. It’s so new. It’s not like any of the stories we’ve seen before, not really. Dani spends the first half of the season being afraid to love, being literally haunted by her fear of it, and in the end it’s what saves them all. 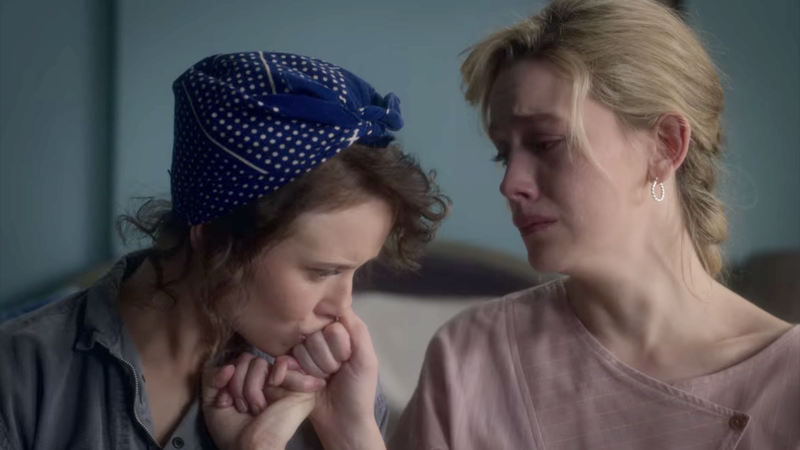 I didn’t connect to the characters as quickly in Bly Manor as I did in Hill house, so after eight episodes when I hadn’t cried at all yet, I was feeling pretty proud of myself. (We’ll unpack why “not crying when feeling emotional” is a thing I consider a victory in a future personal essay turned therapy session.) But the joke was on me when I spent the entire finale crying. Just, the whole thing. But it felt like a good cry. Dani and Jamie didn’t quite get what one would consider a typical “happy ending” but I loved it. (Plus there’s a kind of lovely metaphor for depression tucked in there that I’m too deep in a depression of my own to address at this time; check back again next year.)

Dani and Jamie don’t have a happy ending, but they have a happy middle. A happy one day at a time. A happy ever after, in a way. Then Dani’s story gets told — a gift from Jamie, because she sees how sad Dani looks when Owen tells them Flora and Miles don’t really remember the events of that summer. So Jamie tells her story to the people who lived it. And that last scene, that last frame, left me feeling shattered to bits and yet hopeful all at once.

Overall it was a well-written, beautifully acted, stunningly filmed horror series, with old ghosts and new ghosts and fun lore and a lesbian love story for the ages. I’m constantly going on about the lack of positive representation in horror, and this is exactly what I was looking for. Horror is my favorite movie genre, and TV is my favorite medium, so to have these two Haunting seasons that combine the two ALSO have characters I can connect to on a personal and queer level? It’s everything I could have hoped for and more I didn’t even know I was allowed to hope for.

Because the thing is, “positive representation” doesn’t have to mean everything is sunshine and roses all the time. Jamie and Dani were well-rounded, three-dimensional, lesbian characters with their own stories and personalities separate of each other, they had their own roles in the story and then their roles together as a duo. Not to sound cliché, but they literally found love in a hopeless place.

I know the ending of Dani and Jamie’s story isn’t a riding-off-into-the-sunset happy ending, but I would argue it’s also not an unnoticed-from-across-the-opera-house tragic ending either. Dani and Jamie’s love might have bloomed like a moonflower — just for a little while but oh so beautifully — but Jamie knows better than anyone that the pain of losing Dani was a fair price to pay for the joy of loving her. Their love was so big and so deep that it became the story she tells. And as Liv Crain once said, “When we die we turn into stories. And every time someone tells one of those stories, it’s like we’re still here for them. We’re all stories in the end.”