Previously on The Fosters, R and J finally happened. It sure was something. Mat and Mariana confessed that they’re still in love with each other, but they’re also boning other people and don’t know how to move forward. Brandon and Callie blah blah blah with their blah and he blah blah blah. Lena didn’t speak a single word the entire episode. Jack kissed Jude before getting placed in another foster home, which was the foster home Jude and Callie fled when this show first started, and the dad at that foster home literally killed Jack dead. Stef shot the dad because he tried to shoot her first, but it was too late for Jack. 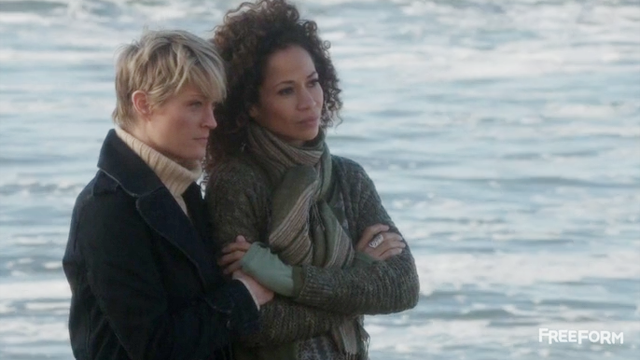 So proud he became a pastor of the True Gospel. 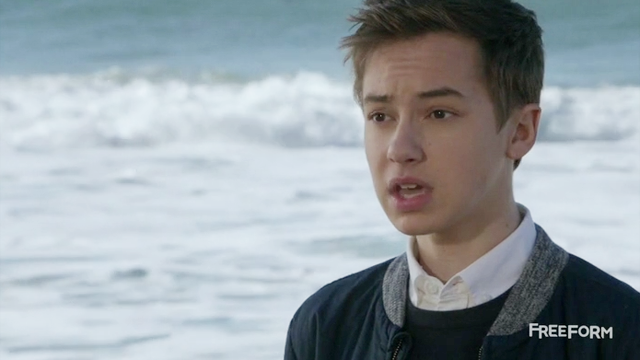 And on the third day, fandom rolled the stone away, and Lexa lived. 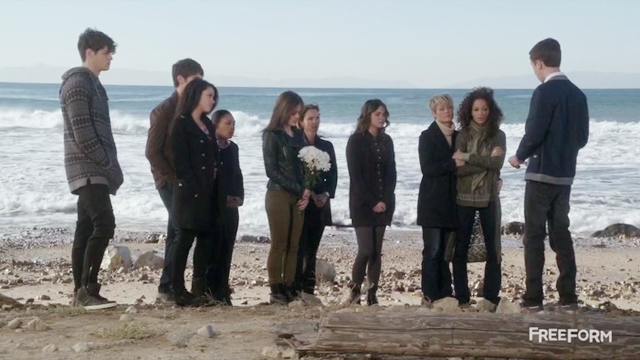 So say we all.

Jude calls together his friends and family to bid Jack a fond farewell by quoting one of his favorite songs that echoes the prophet Micah pretty good, and to throw some roses into the sea, and also to declare that he is not sure he’s very gay after all. It’s the first unkind thing he’s ever done, because he says it to Taylor, who has been in love with him since day one. She spends the rest of the episode following him around like a hopeful little puppy, and he rewards her by kissing her to test out whether or not he could maybe be straight. His face is inscrutable afterwards, but hers is not. She is smitten to the max.

Callie asks Jude what the actual heck he is doing. And Jude says that God gave humans free will and also keeps snatching away all the dudes he kisses, and so maybe God doesn’t want him to be gay. Callie explains to her little brother that the “free will” thing is actually more of an esoteric theological debate between Calvinists and Arminianists centering on the question of predestined salvation, and less of a commentary on people being able to choose their own sexual orientation. Also, Jack told Callie he wasn’t gay before he died, and that he just kissed Jude as a plot point and to give his death an emotional anchor, but Jude doesn’t believe Callie because Callie lies about a lot of things. 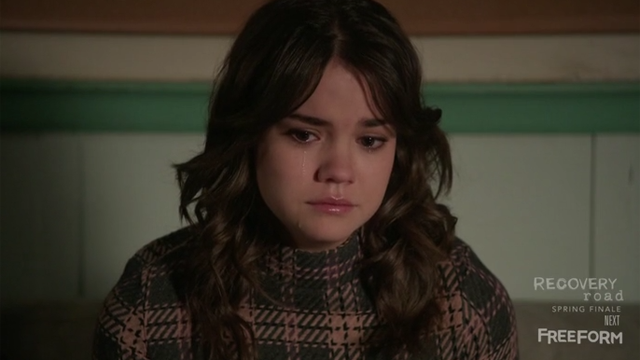 But why are Hillary and Bernie supporters ripping each other to shreds when there’s a real monster threatening the country?

Specifically what Callie has been lying about all season is having sex with Brandon. It is a lie of omission. And it comes back to haunt her like I will be haunted for the rest of my life by hearing Brandon say, “This little engine thinks he could again” while lying in bed with his girlfriend. You know that monster Justina who’s been playing Callie all season? Well, Stef finds out that it was Justina who got Jack sent to the house where he was killed, because Justina’s non-profit foster care advocacy company is just a front for the for-profit company she works for that places foster kids in shitty places to make money off of them. Like so for-profit that they’re traded on the NYSE. Armed with this knowledge, Callie blows up Justina’s Fost and Found launch party and shouts down the bill to privatize foster care.

For revenge, Justina posts the restraining order Stef and Lena took out against Brandon on Fost and Found, and a reporter asks Callie if it’s true that she and Brandon did it in last season’s summer finale.

Stef and Lena  yell and yell about what they’re going to do with Justina and her lies. They keep saying “our daughter” and “our daughter,” which is so sweet and perfect and also it makes it about a thousand times harder for Callie to finally confess that she and Brandon did, in fact, have sex, and the look on Stef and Lena’s faces. They honestly cannot believe this fucking storyline will not die. 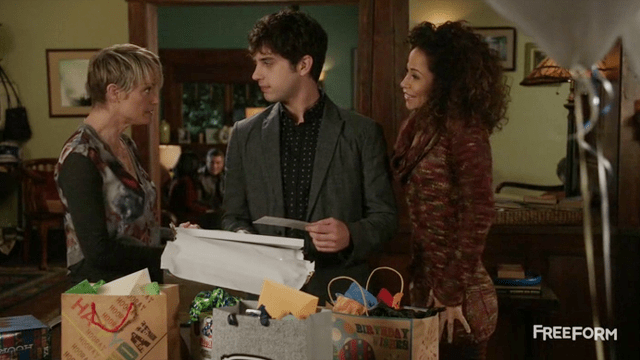 Only one million dollars? Wow, okay.

Would you like to know where Brandon is while Callie’s world is falling apart because her friend died and her mentor turned out to be a monster and a reporter is plastering her face all over the internet with this headline about her and Brandon? I know you don’t, but I’m going to tell you anyway. Brandon is screeching at Mat and Mariana about how they can’t get back together because if they pursue authentic happiness with one another they are stabbing him in the back because he needs to make money off of R and J, which means he needs Nick to continue to let them use the warehouse and what would this play be without The Nurse’s epic solo performance? So, for his sake, they need to be miserable with people they don’t love, unless they are selfish assholes and chose to be with the person they do love.

They agree that he is right, that no one’s ever had problems like his problems, that he’s always got everyone’s best interests at heart, etc. 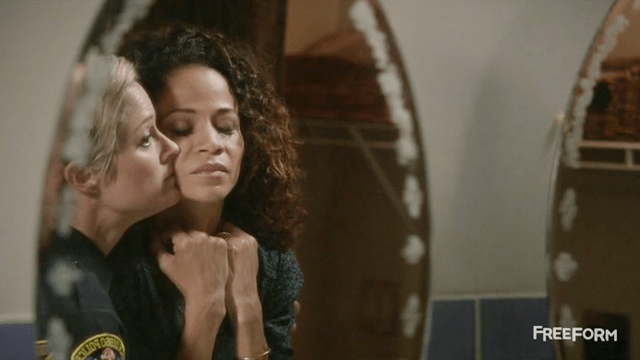 We’ll find a way to destroy Brallie, I promise.

Of course when Mat and Mariana are saying their goodbyes for the greater good, Nick sees them through the window and Nicks out in the most Nick way possible. It’s so Degrassi. I’ve known this clown was Canadian teen soap material from the very beginning. First he literally sets his dad’s warehouse on fire and burns it down to the ground. And then he drives to Anchor Beach and sits in his car crying for a minute and then pulls a gun out of the glove compartment.

Obviously Lena’s day isn’t as traumatic as Brandon’s, but she does end up in a real pickle with the San Diego school board. She accompanies Monte to her trial where Monte explains that her actions with Sally weren’t untoward and that Sally tried to kiss her (not the other way around) and she didn’t report it because she didn’t want to embarrass her. (Dumb!) I mean, she did hang out alone behind closed doors with Sally and just sit in her car in the parking lot talking to her for hours and encouraging her because she’s the best and brightest star in the universe. (Dumb! Dumb! Dumb!) But she didn’t kiss her. Lena tells the board that Sally is going to testify similarly, and Sally does, but then she keeps on weaving the yarn past the part where she’s the one who tried to kiss Monte and says that she only did it because Monte agreed to write her a letter to Brown if she did lesbian stuff with her. Sally’s mom chimes in at this point to say that Lena is an “out lesbian” and that Monte is her “lover” and that’s why she’s trying to do this cover up. 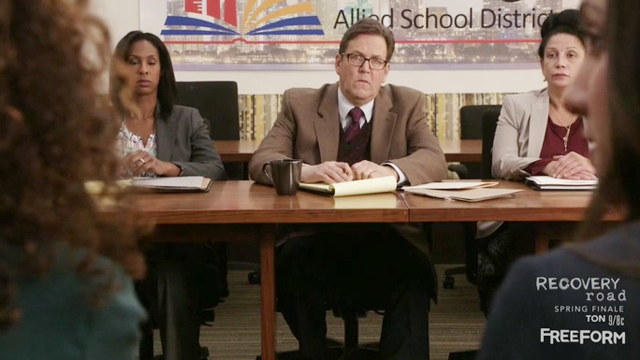 I’m sorry my genius storytelling skill is lost on you and that it hurt your feelings or whatever even though I had a reason for what I did. 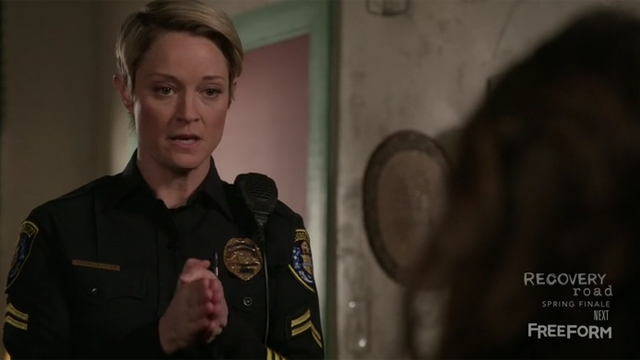 For reasons that are unclear, the school board sides with Monte, but there’s another issue: Lena let a registered sex offender build sets for a school play. At a school where Degrassi Nick is sitting in the parking lot with a gun, let me remind you. #Cliffhangers

Other bits and bobs: Mike and Ana are dating. Gabe’s going to end up back in jail for all eternity if Jesus doesn’t leave him alone. Brandon uses his Juilliard money to buy a house for Courtney and her kid. And Stef’s new hair is still deliciously queer.

Next season: Nick’s gun goes off and shoots this Brallie storyline right in the face and it dies forever. Lena and Stef install their own pool in their backyard. Callie’s endless suffering never ends. Mariana builds a rocket ship with some parts she found around the garage and codes it to send Brandon to the moon. And Connor finally comes back to San Diego to gay his gay gays with gay Jude.

What’s the next adult recap y’all want? Orphan Black? It’s back so soon!