I’ve been really feeling the very present vibes of SUMMER lately, and so I’ve found myself stuck on the idea of a strawberry dessert.

I’ve always had a festive and carefree association with strawberries. It might be because I used to go pick them with my grandparents as a toddler, and my grandpa would sit me down in a row and instruct me to eat as many as I could. Maybe because the Red & Wild Strawberry Social in To Wong Foo was a formative piece of my queer femininity. Possibly that my sister and I have a really stupid joke from a really obnoxious cartoon — “we can eat cheesecake TOMORROW” — about how our best moments are always yet to come, that also involves a cartoon strawberry cheesecake. But the most pertinent reason for my strawberry fixation is that red foods are part of Juneteenth tradition and a few weeks ago, I was exposed to some bomb-ass strawberry desserts that people had made to celebrate — and on this July 4th weekend, the only appropriate celebration of freedom is a repeat of Juneteenth.

So high on strawberry energy, I decided to make a pie that’s part cheesecake and part cream pie, and that involves very little difficulty. I made this pie while I drank wine in my kitchen and worked on an audio project with my usual partner in quarantine crime, Phoebe Unter. So, you’re in luck, because you don’t need to be sober, and you don’t need to be paying 100% attention to make this dessert work really well anyway.

I definitely used the New York Times Cooking recipe for Strawberry Pretzel Pie as my guide, but you know I made some of my own additions. As always, I encourage you to change it up to your tastes, but the main ones that I made are as follows:

How To Make The Strawberry Pie 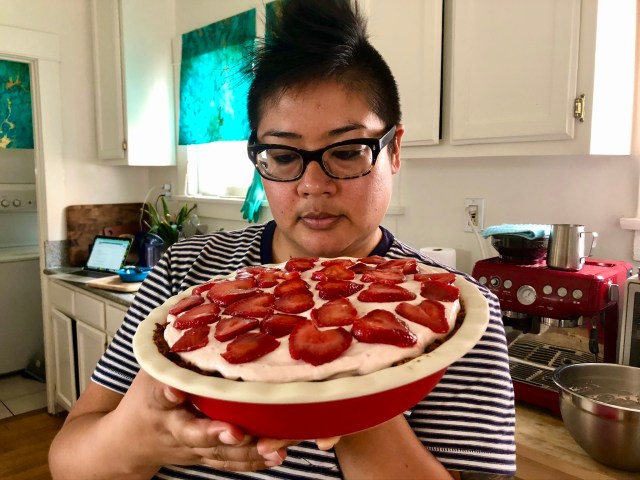 For the the crust:
1 1/2 sticks of butter melted
2 cups of ground cookies for a 9 inch pie plate
1 teaspoon baking soda
1 teaspoon salt
1 dash of cinnamon

For topping:
2 pounds of strawberries sliced
balsamic vinegar (a smoother one is better than a sharper one)
1 sprig of basil

Directions For The Crust
Heat your oven to 400 degrees.

Melt your butter in a sauce pan or in the microwave. And also pull out your cream cheese so it’s not totally cold for the next steps.

I know I need a food processor, I think I just have been living under the values of my mom’s kitchen for so long, which involves the master concept: very few kitchen appliances can do anything better than a sharp knife and good knife skills, and appliances take up space.

But in the category of crushing cookies, I needed help. So I used my hand-blender-powered mini processor to blend up two sleeves of coconut butter cookies I found at the store. This crust is basically a graham cracker crust process, but with cookies and a little baking soda for lift.

Once I had the cookies ground into a pretty fine powder, I dumped it into a medium mixing bowl, added the salt and baking soda and mixed it up. Then I drizzled the melted butter into it, tapped out a little cinnamon and mashed it up with my hands.

I buttered the surface of my ceramic pie plate and then dumped the crust mixture in, and spread it out over the plate. I’m not good with making cute pie crusts and I also have a problem with knowing how to make things even, so this was not a perfect process. If I were a real baker, I’d have made sure that the crust really hugged the edges of the pie plate and wasn’t too thick or clumped up in certain areas, but instead, I lived with a weird crust.

Then I popped the pie crust into the oven to bake for about 15 min, until the edges had turned golden brown. 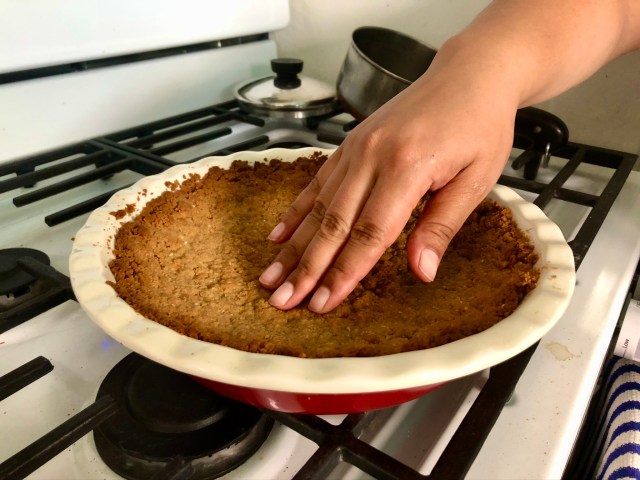 When it was ready, I put the whole plate into the freezer to cool.

Directions For The Filling

If you don’t have an assistant to slice your two pounds of strawberries — while sharing a recent revelation about how annoying they are to their parents, arrived at by witnessing a good friend sniping at her parents for being classist and capitalist — then you should do those now. And if you do have an assistant, have them start now. 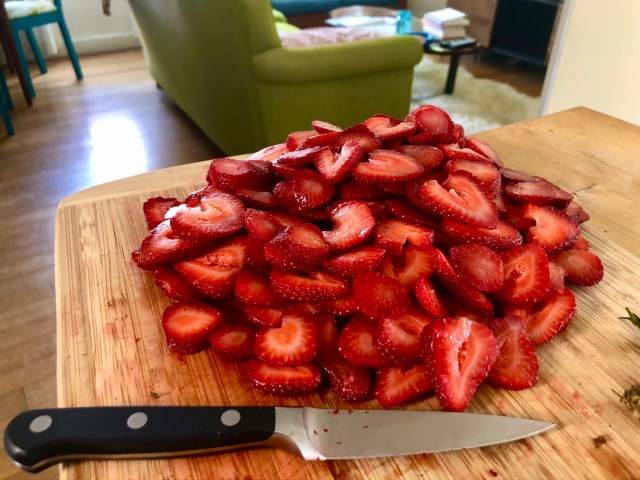 To begin, dump your container of cream cheese into a large mixing bowl. Spread it out with a spatula and start mixing it up to get it soft, pliable, willing to mix and mingle.

Add your confectioners sugar and then use a stand or hand-mixer to get a really good blend going on, so the sugar and cream cheese become one.

Add the vanilla and the, a little at a time, add the whipping cream. Turn up your mixer so the cream is getting whipped and thickened at a good speed. Once you have added all of your cream, give it a little extra time to get a little extra dose of air in there. Normal fears about over-whipping the cream are assuaged here, because the cream cheese isn’t going to let it turn into butter so easily. 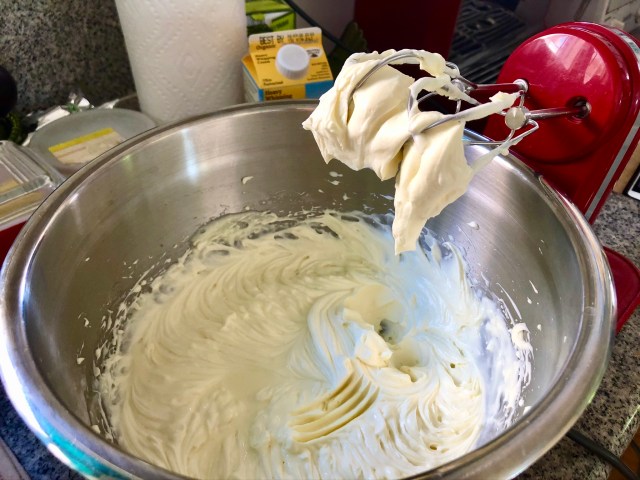 After the topping is pretty thick — like it hangs from the beater and doesn’t fall — it’s time to puree your strawberries. This is not a science, but here was my faux-scientific thinking: I didn’t want too much puree so that the water in the berries made the cream filling separate, but I did want it to taste like strawberries.

So I put about a cup of sliced strawberries into my mini processor until it was a smooth paste-liquid. 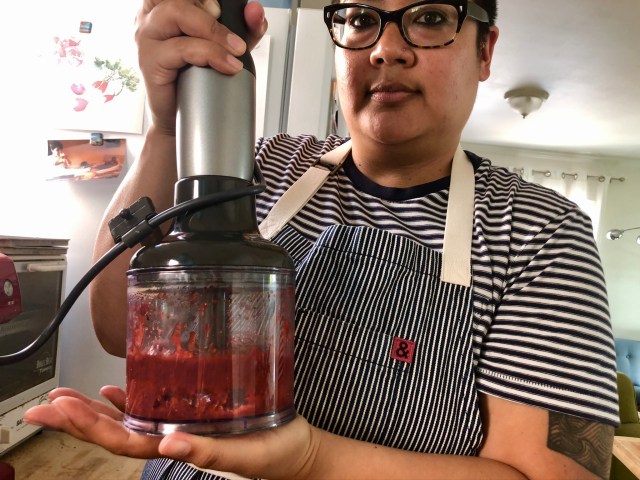 I added it to the cream and gave it a final whip with my mixer to incorporate it. 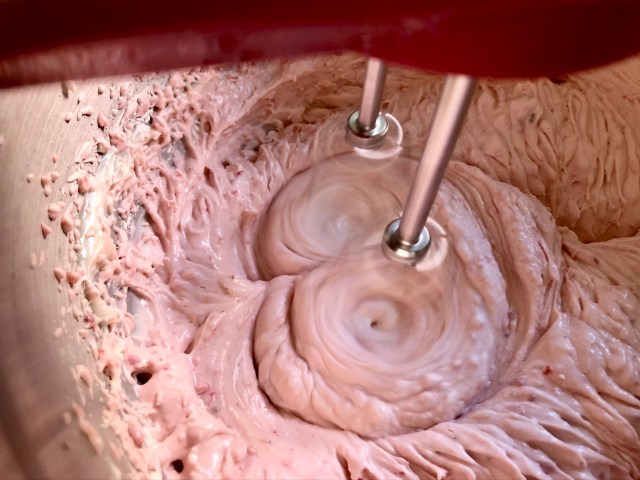 Pull the pie plate out of the freezer. It doesn’t need to be cold, but the crust and plate should not be warm anymore.

I know that most people don’t like soggy bottoms. But I have always been a fan of textures like the soggy Nilla wafers in banana pudding, and the soggy Oreos in a dirt cup and the wetness of a tres leches cake. So I put a layer of strawberries down, just to cover the crispy cookie crust and make it a little soft and cakey while it set. 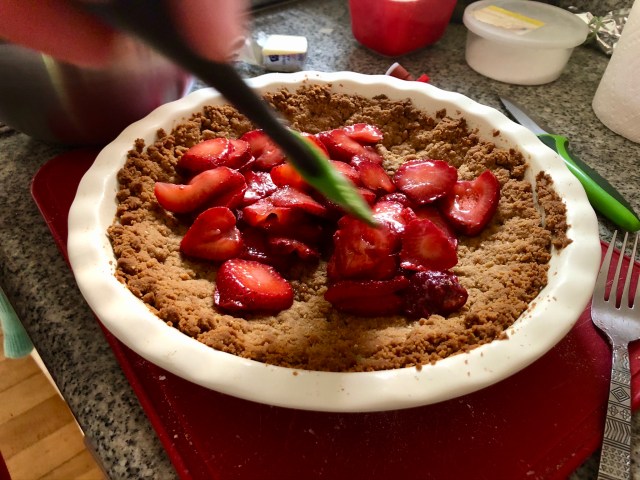 On top of that, I folded my pink cream cheese mixture, all the way to the top of the dish. 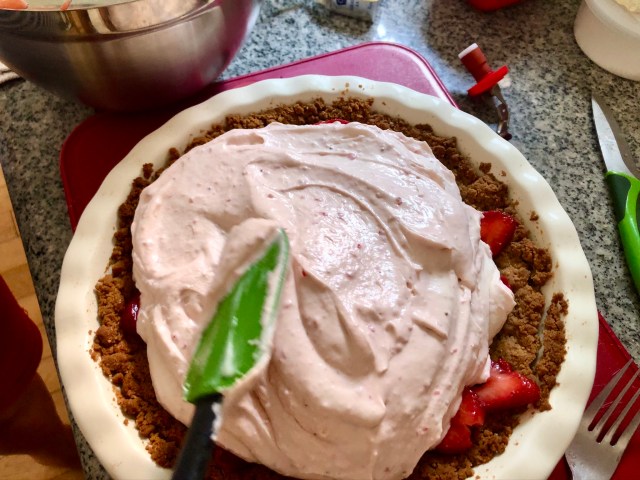 At this point, I added a small handful of regular sugar to the rest of my berries and tossed them. This is where my mom might add a splash of Grand Marnier, which does really enhance the stawberriness. Then I left my trusty assistant, who is way better at details and visuals than I am, to cover the cream top with slices of strawberry and put the pie in the fridge. 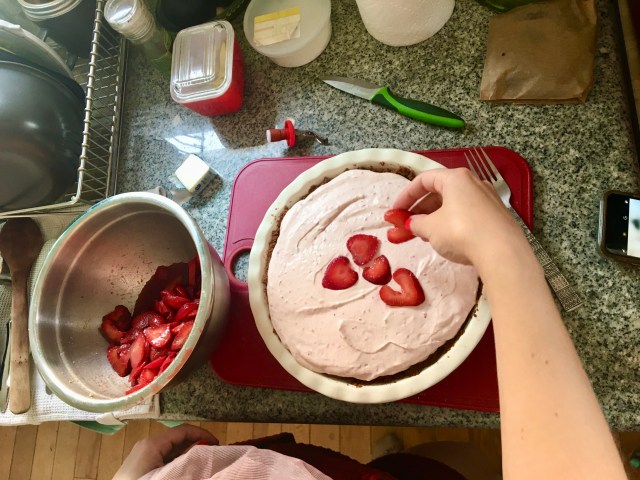 Directions For The Sauce
Get out a small sauce pan and turn the heat on low. Put maybe half a cup of sliced, sugared strawberries in there and add two big splashes of balsamic vinegar and a whole sprig of basil. 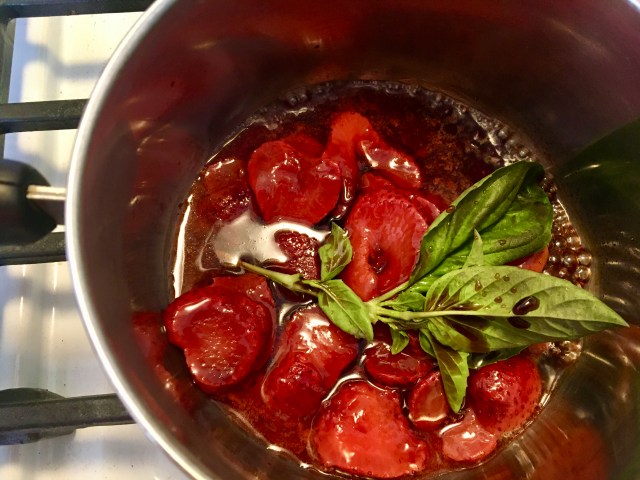 Then let the thing simmer for about 10-15 minutes, you don’t need it to get very thick, but you could if you wanted. I just like to have a little acidic tang to the sweet and cream, and the hint of basil is bright. You can blend this into a puree, but I don’t mind mixing the cooked strawberry slices with the raw ones on top of the pie, I think it’s a nice variety.

Taste your sauce, see if you like it. You can keep doctoring as you need or if you’re happy with it, put it in a jar to go into the fridge and let it chill with your pie.

Your pie should be set within an hour or two, you can shake it and see. When you’re ready to serve it, cut it up, add more of your sugared strawberry slices to each serving and pour the sauce over the top.

A friend of mine sent me a big bag of dried mint and sage from her garden, so I made an iced tea with it. That was a very herbaceous and refreshing complement to this pie. I’ve also had it with a chill light red wine and that was also superb. So get your strawberry cream cheese pie on, and go sit somewhere pretty and think about whatever the hell you want.