Overalls are, overall, a staple for many southern queers. They’re functional for farming, or for walking around your local farmer’s market with your dog. Need to record a video of something but also need both hands? No worries, just set your phone up in the convenient front pocket and start recording! Are you trying to climb up something and need a little extra help? You’ve got a handle right there on the denim pant leg that makes it simple and easy for a friend to grab ahold and yank you up so you can take pics! Do you too get tired carrying around a large neon arrow pointing to you that says LESBIAN? Overalls are great for letting other people know that you are, in fact, a lesbian!

I began my overall journey almost a year ago, when my Grandma Panaccione bought me a pair for Christmas. I had been browsing thrift stores for a few months but hadn’t found any in my size, which I apparently complained about loudly and often to my sister. My sister told my mom who told my grandma, and my grandma took it upon herself to make my dreams come true. I was thrilled, obviously, and proceeded to wear them for the next week straight (or, perhaps more appropriately, the next week gay).

Of course, wearing overalls isn’t always as simple as you might think. My overalls, bless their nonexistent denim heart, have had some trouble keeping their shit together (relatable). First, the hooks that connect the shoulder straps to the front flap (and the useful pocket) lost their clasps, so my overalls were constantly at risk of sensually falling open to reveal the plaid shirts I wear underneath. There wasn’t really much I could do about that, other than make sure my plaid shirts were clean and laundered, so I carried on bravely, continuing to wear my (very heavy, very denim) overalls all throughout the wet heat of the North Carolina summer. Handsomeness is pain etc etc etc.

However, a more troubling issue occurred one night as I was doing laundry. I had put my overalls in the dryer, as you do, typically after washing them, and was listening to the hooks bang against the metal inside – since I could no longer attach them to the front flap, they just kind of flailed around when I washed/dried them. And, reader, I cannot tell you how unbelievably loud this process was. It sounded like I had put an entire percussion section (marimba included!) in the dryer and hit spin. Other than the noise, which, I cannot emphasize enough, was incoherently loud, the overalls were always fine. But this time when I took them out, I noticed that one of the hooks had just given up entirely and was no longer attached to my dear overalls at all. A lesser, straighter person might have given up the ghost at this point, but I was determined. I had been given these as a gift, goddammit, and I wouldn’t let them best me by continuously falling apart (again, relatable). I contemplated committing to the coy One Strap Look, and while that was certainly a great option, I didn’t want to have my choices that limited. Also, I like to fix things! I’m not the kind of person who can just go around throwing my money at overalls whenever I want, so I’ve learned to make do. And sometimes, there’s an easier solution sitting right there — yes, there, no a little more to the left, little more, right in front of you oh my god, YES, YOU’RE LOOKING RIGHT AT IT, IT’S THE CARABINER YOU DUMMY. I grabbed the carabiner off my keys and slipped it into the shoulder strap, and then I was back in business — the business of wearing overalls and making them look damn good, that is.

Now that it’s fall and my overalls are back in heavy rotation, people have started noticing the carabiner and complimenting my (objectively great) fashion choices. They’re good conversation starters and provide lots of social lubrication, including fun, engaging questions like “do you just have denim overalls or have you found a nice pair of corduroy ones as well and if so where can I get a pair?” or “how many cans of PBR/bottles of wine/flasks full of whiskey have you managed to smuggle into a hockey game in your overalls?” or “do you work on a farm or are you just a lesbian?”

I know it might seem silly, and small, but it’s comforting to know that I can make things better, even if it’s just a pair of overalls that my grandma gave me. They’ve been through a lot this past year, and so have I, and we both survived it — maybe not exactly the same as we started it, but still looking fun and functional and gay. So go forth, southern-identified queers and lesbians of every geographic location, get a pair (or four) of overalls, and live your best gay life. 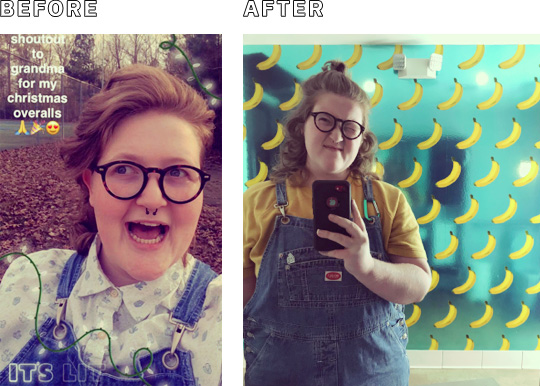 Abigail lives in Chapel Hill, NC and currently works at a library, surrounded by dusty old books. One of twelve grandchildren, she grew up in a household full of characters that she’ll definitely one day write a memoir about, but not right now because she’s busy doing other things, okay grandma? She spends her free time watching movies, hanging out with dogs, and tweeting utter nonsense @ghostscissoring.

Abigail has written 1 article for us.