As a child, I desperately wanted to wear hoop earrings. In first grade, I made makeshift hoops out of Barbie bracelets — my unpierced earlobe occupying the space between its open clasp. My repeated attempts to jam its metallic painted plastic into my skin left my ears pink and inflamed.

I envied a baby girl at my grandma’s at home daycare who had pierced ears, who thrashed around her crib in sparkling studs. Though she had not yet turned one, her studs seemed to put her years before me. I wished secretly that my ears had been pierced when I was a baby, so I could boast the accomplishment without having to remember the pain. These are the veins through which I first understood femininity — endurance, strength, pain. When the time finally came to select my first pair of hoops from a rotating mall kiosk, it felt like a sacrament.

In middle school, I fell in love with the ritual of make-up. I doted over lipstick ads in NYLON and consumed newly emerging make-up channels on youtube, always zeroing in on the most dramatic portrayals of beauty; the most cutting lines, the deepest hues. When I was alone in my room, I exhausted the one black shade of an eyeshadow palette I’d gotten for Christmas; I loved the crackling of the powder under the tiny sponge brush, each stroke of the wand against my eyelid felt like a gift, a rebirth. The first Revlon liquid eyeliner I got in middle school was sacred, its application intuitive. Makeup allowed me to embody myself in a way that felt ancestral. 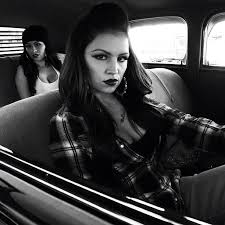 I slowly came into my identity as a femme lesbian in high school. Throughout my first queer relationship, my masculine partner considered my femininity both threatening and frivolous. They worried that my presentation correlated with heterosexuality and that I would leave them for a cis man. They expected my constant attention and unending emotional labor.

My attempts at dating and finding community in college were equally as unsuccessful. At queer bars, gay men accused me of being straight. I was fetishized for my Latinx identity by people on Tinder— it became comical the number of people who just so happened to mention their attraction to Barbie Ferreira to me during our dates— and I was often used as a disposable vessel for their traumas. One summer, I sat with a date in Washington Square Park and off-handedly mentioned being femme, only for them to cut me off mid-sentence— “No, you’re so femme. With that valley girl accent, you’re so femme…”

Femininity was something I cherished, I spent years aching for the future in which I could meticulously adorn myself everyday. Yet, my presentation didn’t seem to resonate with the people I met, leading me to believe my femme-ness was something better nourished in private. Looking for solace, I began to collect vintage photos of cholas on my computer, studying the heavily made-up Latinx women of Southern California’s past who donned glimmering gold hoops, wicked wings, and acrylics long enough to pierce. Perhaps part of me felt that if I saturated my brain with images of them, I could inherit their pride.

Before there were cholas, there were pachucas. Pachucas were a subculture of Mexican American women who lived during the 1940s and were known for sporting oversized menswear. Pachucas, and their male counterparts, pachucos, were targeted by white Americans who claimed the excess fabric in their clothing represented a hoarding of wartime resources and racially stereotyped the community as violent and criminal. This antagonism reached a boiling point in 1943 when white military officials began assaulting and stripping pachucos and pachucas on the Los Angeles streets in a ten-day series of incidents later known as The Zoot Suit Riots.

Pachucas were deemed especially controversial because their presentation carried an added layer of gender incongruence — painting their lips and drawing their eyes immaculately while wearing men’s trousers and blazers. While much of the scholarship on the time period credits pachucas for transgressing gender, they do so while using the white mainstream as the compass — a group these women would be alienated from regardless of their fashion choices. Many pachucas were first or second generation immigrants who had no model of Mexican American women represented in the media. They were literally creating a new way of being, and looking cool as hell doing it. 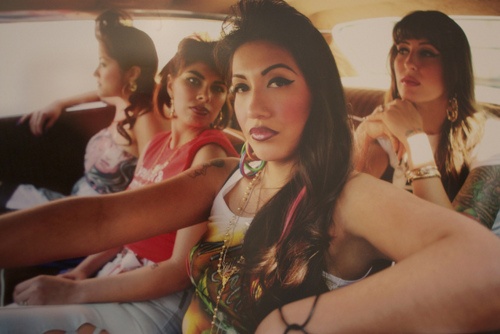 Later on, the chola look gained popularity in Los Angeles barrios, particularly among individuals involved in lowrider culture. Cholas evolved from pachucas, embracing their signature teased hairstyles and occasionally borrowing elements of menswear, but their style was more influenced by street fashion; the cholas were apt to have tattoos and sport baggy jeans and sneakers. In contrast to the androgyny of pachucas, chola fashion was also marked by skin-tight crop tops, large hoops, and boldly lined lips. The chola look engaged with white beauty standards by containing traditionally feminine signifiers like makeup, manicured nails, and styled hair, but dialed all of them up to their most dramatic proportions. For average white observers, who associated them with violence and criminality, their presentation seemed to taunt them: why are you threatened by my femininity?

This is precisely what I admire about cholas, and what I wanted to emulate for myself as a femme. These women were highly feminine, but not the dainty kind, the kind that has lived a thousand years. I love cholas because they couldn’t afford to be subtle and didn’t want to be.

It is also why I see my Latinx and femme identities as interrelated, both containing within them women who are fiercely feminine, but who are not assigned the same softness and purity as their white and or straight counterparts. Instead, femmes and cholas serve as the outlaws of their gender — existing in the sweetest point between soft and hard. Femmes dare to imagine a femininity outside of heterosexuality and cholas dare to imagine a femininity outside of whiteness. This is how we survive, writing the scripts for our own existence.

The summer I studied cholas, my soon-to-be-roommate invited me over for stick-and-pokes. She sat on the wood floor of her basement apartment and I rested awkwardly on her lap, gazing up at her wall of vintage playboy clippings as she slowly pressed the ink-dipped needle into my ribcage. The end product read “HIGH FEMME” in letters too jagged to decipher. For a long time, I hated it. Yet, years and many more semi-regrettable tattoos later, I return to the image of when I saw it for the first time —”femme” written in rugged script on my puffy, stinging skin — and it just feels perfect.

To be Chicanx is to embody a degree of pain, whether lived or inherited. Pachucas demonstrate the way in which Latinx people in the United States have been tasked to write our own anthropological histories, and the cholas upheld their honor. Both groups wore their refusal to assimilate on their backs, even in violence, poverty and oppression.

I want a femininity that has struggled, that rejects subtlety. Our survival, beauty and complexity as femmes lies in our perfect calculation of grace and toughness. I no longer shame my femme-ness. There is a divinity in the fluid movement my fingers inherit after they’ve just been manicured and in the rhythmic tapping of their faux tips against everything I touch.

There is nothing like spotting another femme. It’s that look — the locking of flawlessly lined eyes. This is our language.

Cortez is a writer and educator in Brooklyn. Her work has previously been featured in i-d.

Cortez has written 1 article for us.