Two weeks ago, I went to NY Tech Day. It’s essentially a giant, somewhat overwhelming display of New York City startups. A fair of sorts, where a bunch of companies have booths to display their products and tell participants about the positions they’re currently seeking to fill. I was the only masculine lesbian I saw. I tried to take photos of the environment, and couldn’t manage to get one that wasn’t entirely or almost entirely men. Within ten minutes, a man from behind the puku table made an inappropriate lesbian joke at me. I told him I was press. I was considering featuring the product, a very sleek luxury charger, in a gift guide somewhere down the line. Instead, I put on my best “not-amused” face and wrote “nope, lesbian joke” on the brochure I was holding. In short, I have been utterly spoiled by Lesbians Who Tech. I’d forgotten that mainstream tech conferences were like this. 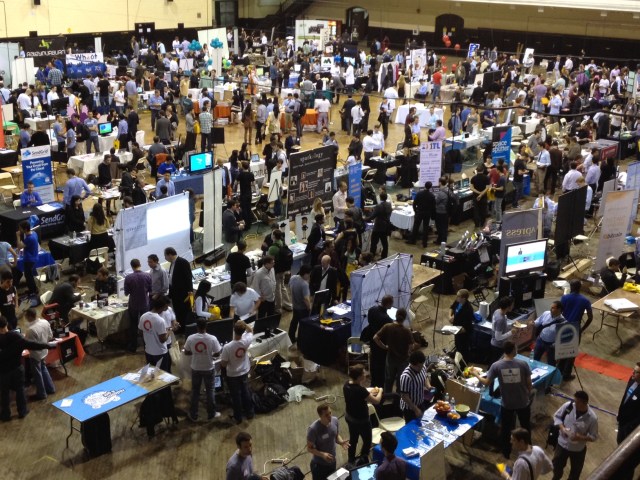 This is what Tech Day looks like, via Forbes.

What that does do, though, is create a very sweet solidarity between everyone who isn’t a cis, straight white dude in this space. The two black women behind the table at JW Player smiled and said, oh you bet we get it. Ten-fold as they handed me a flyer, something to include in our opportunities corner. After this experience ten minutes in, I decided to only visit tables with at least one woman behind them. It’s such a low bar; it cut out a lot of tables.

Here’s a roundup of the very coolest products, companies and people I found at NY Tech Day, following this method of selecting which booths deserved my attention.

I LOVE box subscriptions. Love love love. And this is a box for kids that teaches them how to code—every box comes with dozens of apps, and everyone gets everything. No girls box or boys box. The Rocket Girl project goes out to everyone. The coolest thing, said Anastasia, the Director of Operations, is then watching the kids break the apps and rebuild them into exactly what they want. Kids build with real code, not visual building blocks. The box is $30 per month.

Babbel is a language learning platform I haven’t used before, and y’all know I’m always looking for ways to brush up my French. I tried it out for a hot second and it feels more like a textbook than Duolingo. A lot more orchestrated, a lot more cohesive, a lot less like a thousand internet voices translating something. You can subscribe to each individual language for $8.95 a month when you subscribe for three months.

The best people to explain 2020Shift is 2020Shift. From their about page:

There’s a serious diversity issue in tech and we’re here to solve it. We believe that everyone should have the resources they need to pursue a career that they love and excel in. Our team has spent years working as tokens in the space and we wanted to give light to hidden opportunities that are lucrative, exciting, and essential to any tech or media company.

We know the only way the culture of technology will change is if minorities are represented in the workplace. For that reason alone we are dedicated to getting as many people into the industry as possible. We’re embracing companies that want to make their teams more diverse and hope that you can be the next addition.

They do this with their #MoreThanCode classes—designed to get minority millennials into the tech industry with a six week program in digital marketing and UX Design. Classes are hosted in Silicon Alley (that’s the startup community of NYC that no one ever hears about). Check ‘em out and support ‘em!

Croissant is a co-working space solution that lets you pick from a bunch of different spaces around your city (New York City, Washington DC and Boston) without committing to more than a month at a time. This one was especially interesting to me as a remote worker. And as a remote worker who sometimes uses her own apartment, I appreciated that one could do a limited plan with them that allows for 40 hours in a month for $99. The whole shebang with unlimited hours costs $299 a month, which is about what it is for other, permanent spaces (but without the pesky initiation fees).

Hey remember when I wrote this piece? .gay still hasn’t been resolved, but .lgbt was available right away. Back when I wrote the article on .gay, I emailed briefly with Brett Samuels, the brand manager for .lgbt who said, very briefly, that .lgbt was a much more inclusive option for the community and ain’t no one gonna try to police your queerness. This very brief statement got cut from the piece, because the piece was already a monster. I met Brett at Tech Day and he also said that, when it comes to .lgbt, there’s a reporting system, so no one can put anything harmful to the LGBT community up on one of those domain names. So there’s regulation without identity policing. Pretty cool, right? You can find out more at .lgbt’s very own website, and you can purchase domain names at Namecheap.

So at this table, I legit talked to two queer women and their adorable baby. That’s who’s running WeLeet, and their philosophy is “work from home, but not alone.” When you sign up, you take a co-working quiz to find out your co-working personality type (I got The Visionary, which is a beyond-flattering category). From there, you can fill out your profile and access co-working sessions. Some of those are hosted in people’s apartments, some are hosted in co-working spaces. But the great part is, the most expensive plan on here is $9.99 a month. Holy. Bananas.

Like 2020Shift, CodeNow’s best advocate is CodeNow. From their about page:

Our mission is to diversify the talent pipeline of students who pursue computer science and technology. We do this by providing free out-of-school computer programming training to students. Our program is essential because it lowers the barriers normally associated with technology by exposing students to programming at an age when they are beginning to explore future options and opportunities. Hosted on the weekends, the workshops take place at tech companies and are led by professional engineers.

Badass. Of most interest to our community, I think, are the Volunteer and Donate sections of their website. But if you know children who want to get into it, this Apply section is for them (next up: Oakland and Salt Lake City).

Well that’s all I’ve got! The very coolest things I found at NY Tech Day for ya. Were you there? Did you find something I didn’t? How do you maneuver through mainstream tech conferences without yelling at everyone like a curmudgeon? Please let’s all chat in the comments below!

And now for something completely different. A few weeks ago, I wrote an article about my concerns with the hegemony of the tech industry specifically as it relates to the burgeoning sphere of virtual reality. I’ve been banging the drum forever on getting more queer women and non-binary folks into tech — generally, the more representative the creators of a product are of the wide scope of end users, the better the product will be. I’ve decided whenever I get something that sounds like a really cool opportunity but doesn’t quite warrant a post of it’s own (or at least, not yet), I’m going to post it at the bottom of the Queer Your Tech for that week so you don’t miss out. These are specifically for queer women and non-binary folks who are looking for careers or to advance their careers in the tech-o-sphere.

This is the NY Tech Day edition! Here’s every company that showed interest in hiring LGBT techies and specifically wanted to be included in our opportunities corner:

And don’t forget, there’s still time to donate to The Edie Windsor Coding Scholarship Fund! Donate now so our community members have a shot to apply for scholarships to coding bootcamps!