Tonight, the road to crowning a new National Champion in Division I women’s basketball continues, as the Final Four gets underway in Columbus, OH. For the fourth time in the tournament’s history, all four #1 seeds are among the semi-finalists: UCONN, Notre Dame, Mississippi State and Louisville. 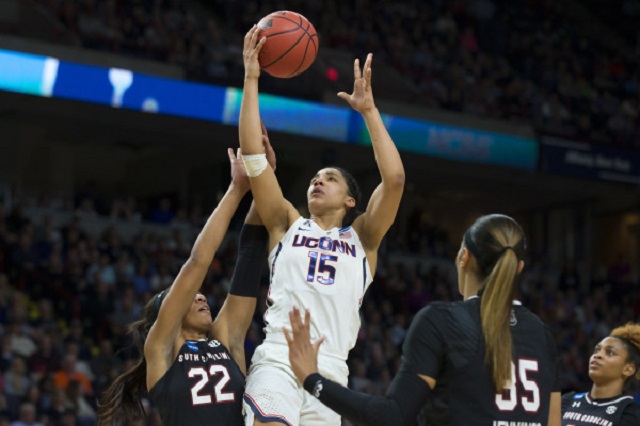 The night before UCONN’s opening round game in this year’s tournament, Virginia, the overall #1 seed in the men’s bracket, lost their opening round game to a #16 seed. It was only the second time in history that’d been done — twenty years ago, the Harvard women’s team upset #1 seed Stanford in the opening round — and it was a visceral reminder that anything can happen during March Madness. Add that to a UCONN roster still fuming over their ouster in the tournament a year ago and a bomb was set… and, like clockwork, it went off, as the Huskies exploded for 140 points in their opener against Saint Francis. It was a profound announcement: the 11-time champs were here and this time, no one would catch them slipping.

Notre Dame head coach, Muffet McGraw, is returning to the Final Four for the eighth time and while it’s easy to write the story about the Blue Blood program that’s looking for its first national championship since 2001, the truth is a bit more complicated and far more compelling. Since last March, the Irish has lost four (4!) players to ACL injuries. The team advanced to the Final Four with a roster boasting just seven scholarship players and three walk-ons. The team has no real point guard and, yet through sheer will and determination and, perhaps, the best coaching performance of McGraw’s career, the Irish have returned to the Final Four. 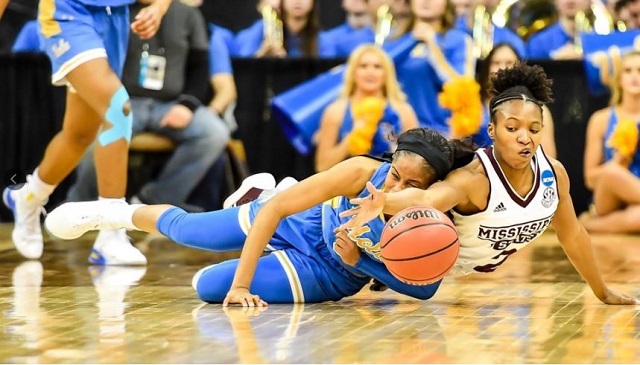 Morgan William dives for a loose ball in the Elite 8 vs. UCLA. (Kelly Ross/Mississippi State)

Speaking of great coaching performances, the year before Vic Shaefer took over as head coach at Mississippi State, the Lady Bulldogs had finished 11th in back-to-back years in the SEC. In just five years, Schaefer’s turned a cellar dwelling program into the SEC regular season champions and a national title contender. The Lady Bulldogs are chasing a title, not content to let the only story we ever tell about them being that game winning, history-defying shot by Morgan William to oust UCONN last year. They want a championship back in Starkville.

Louisville is back in the Final Foul, for the first time since the Cardinals advanced to the national championship in 2013… a run that included, perhaps, the second greatest upset in NCAA women’s tournament history. Jeff Walz has a better team this go around, though, one that’s already won the program’s first ACC championship, its first #1 seed and has its eyes set on a national championship.

Every year, about this time, we have a national conversation about women’s basketball. It’s never the conversation we actually ought to be having and it’s often driven by men who only engage with women’s basketball once a year but still feel qualified to speak about it, but, like clockwork, it happens every year. “Is UCONN’s dominance bad for the game?” they ask, despite the fact that they’ve never asked that question about the Boston Celtics or the Chicago Bulls or Tiger Woods or Peyton Manning or Roger Federer. I wonder why.

Or, they’ll wonder aloud, “In men’s basketball, all four number ones have only made the Final Four once — does it reflect a lack of parity in women’s basketball that all four #1 seeds have made it to the Final Four again?” They ignore the circuituous path that brought us to this Final Four — one that revealed the growth of mid-major programs in the women’s game and brought us electrifying moments like Chennedy Carter’s game winning shot against DePaul — and seem to suggest that the best teams shouldn’t win? In what other arena would anyone even deign to make that argument? 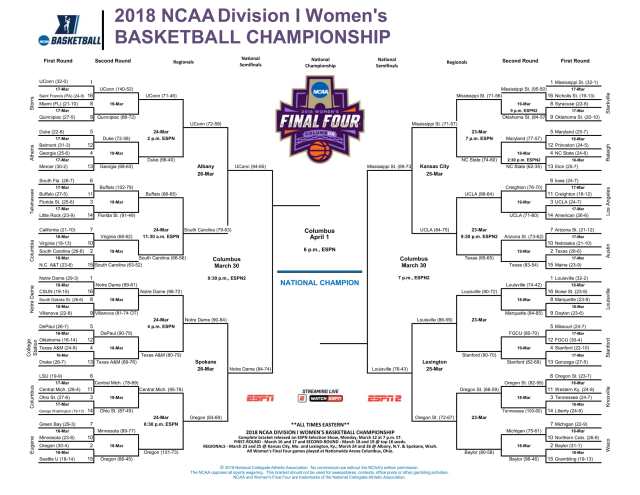 Yes, they’re all very good teams and yes, they’ve all been here before, but that doesn’t mean that don’t deserve this shot at a national championship and that their road to get here was paved in gold. UCONN, Notre Dame, Missisippi State and Louisville have all perserved to get to this moment. Maybe they’ve made it look effortless, but that’s just part of the magic of March Madness. But, I digress.

Let’s look at the match-ups for tonight’s national semi-finals, shall we? 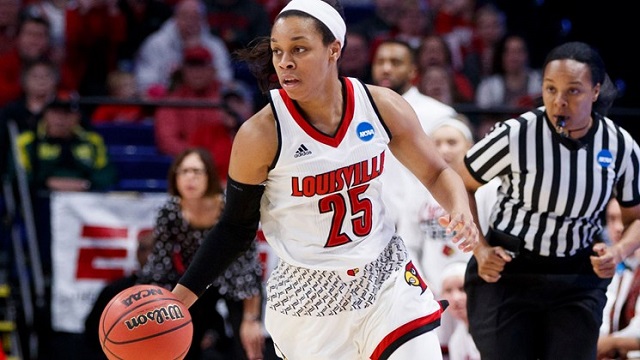 In the first game, airing tonight at 7PM on ESPN, Louisville and Mississippi State will meet for the first time ever. What’s remarkable about this match-up is how similar the Cardinals and the Bulldogs are to each other. Both have potent offenses that, when given room can absolutely demolish an opponent, but their true identities are forged on the defensive end of the court.

Through four games in the tournament, the Cardinals have looked strong, particularly on the defensive end of the floor. After a shaky offensive stretch in the ACC tournament, Louisville’s All-American, Asia Durr, has found her shot again, scoring 24 points vs. Stanford and 18 points vs. Oregon State. But, if the Cardinals hope to advance to the national championship, it’s not just that team’s stars — Durr and Myisha Hines-Allen — that have to show up, Louisville has to use their depth to their advantage.

Though Dawn Staley’s team won’t be competing in the Final Four this year, her strategy for how to beat the Mississippi State Bulldogs will be. The Gamecocks drew early fouls on Teaira McCowan, limiting her to just 24 minutes of gameplay in the SEC Championship and, ultimately, propelling South Carolina to the win — and Louisville may try to replicate that strategy tonight. The Cardinals have already utilized that strategy with success: they drew Oregon State’s Marie Gülich into foul trouble early and Louisville went on to win that game handily. But McCowan’s seemingly learned from her mistakes in the SEC tournament, and has managed to play her unique brand of physical basketball while staying out of foul trouble.

But McCowan isn’t the only offensive threat that the Cardinals have to worry about, Victoria Vivians is perhaps the Bulldogs’ most improved player from their title run last year. She’s become an incredibly efficient offensive threat, shooting 41.2% from three-point range and 48.2% overall. In the SEC Championship loss, Vivians was held to 35% shooting and if the Cardinals can replicate that, they’ve got a great shot at playing for a national championship on Sunday night. 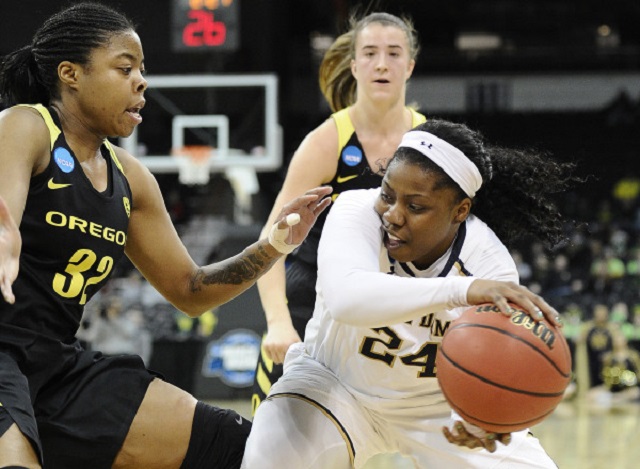 In the second semifinal, UCONN meets up with familiar foe, Notre Dame. It’ll be the 47th meeting between the powerhouse programs, with the Huskies leading the series, 35-11, including a win back in December. That non-conference match-up in Hartford, CT was just one of two games all season that UCONN did not win by double digits.

The Huskies come into the game having won 36 straight games for a reason: their offense is as potent as any in women’s basketball. The team’s lead by All-Americans Katie Lou Samuelson and Gabby Williams but, at any moment, any of UCONN’s starters can get hot and drive the Huskies’ offense. UCONN averages 53.4% from the field and if a team’s looking to stay competitive with the Huskies, that number has to be held to mid-forties, at most. I’ll be interested to see how Hall of Fame Coach, Geno Auriemma, uses his depth — the Huskies played 10 players in the regional final against South Carolina — to tire out an Irish team that plays rotates just seven players.

Can Notre Dame pull off the upset? Yes. Arike Ogunbowale and Marina Mabrey are the best offensive duo in the Final Four, averaging 45 PPG between them. If they can score and do so efficiently — thus limiting UCONN’s ability to get rebounds and start their transition game — the Irish have an opportunity to carry their miraculous season on to the national championship game. Can Jessica Shepard, Notre Dame’s only true post player, draw the Huskies’ defense away from the basket and deliver the ball to her guards? Can the Irish keep the UCONN bigs off the glass? Their failure to keep Azura Stevens off the glass back in December probably cost them the game.

But, perhaps, most importantly the Irish believe they can beat the Huskies. They almost did in December and the team’s only gotten better since then. In addition to the adversity that they’ve face due to injuries, they’ve managed to fight back repeatedly this season, overcoming large deficits to comeback and win. The Irish always believe that they can win and, when facing the most celebrated program in basketball history, that may be half the battle.

The Final Four airs tonight at 7 and 9 PM on ESPN. The winners go onto the National Championship Game on Sunday, April 1 at 6 PM on ESPN.