The prison riot is getting more and more intense, so Lex distracts the prisoners using portals while Lena finishes her science, and hits everyone with a q-wave blast. Everyone is knocked down and chills out a little. Steve says he’s back to normal but…the OLD normal. Not the Non Nocere normal. 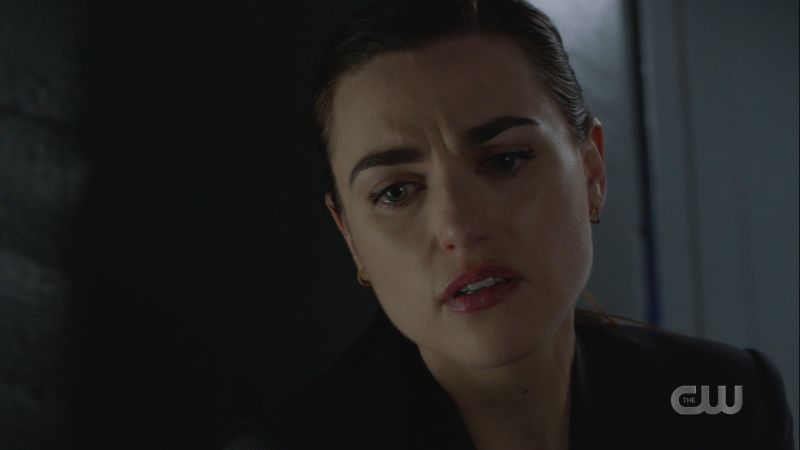 After the battle at the DEO, Kara and Nia look at the rubble of the DEO headquarters. Maybe the DEO as they knew it has been gone for a while, but this feels so much more final. 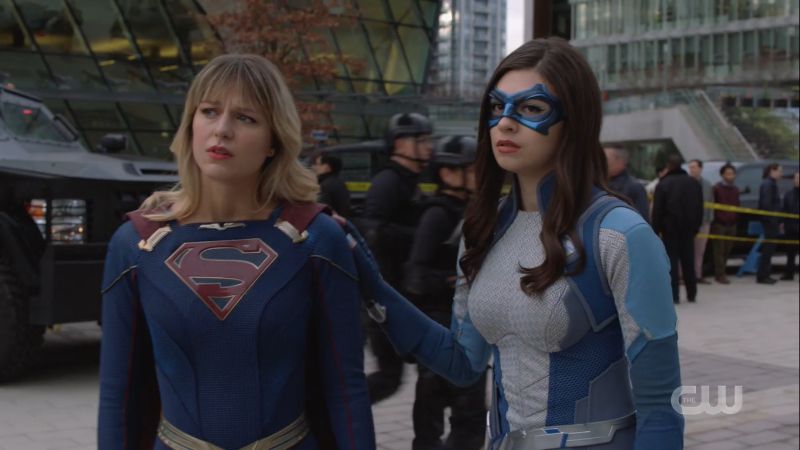 “RIP DEO Building. You were my third favorite balcony to have feelings on.”

Brainy tries to talk to Nia but she doesn’t want to hear it. She was willing to work with Brainy as he adapted to not having personality inhibitors, but he pushed her away. And now Nia doesn’t know who this new Brainy even is, and whoever he is, she sure doesn’t trust him. 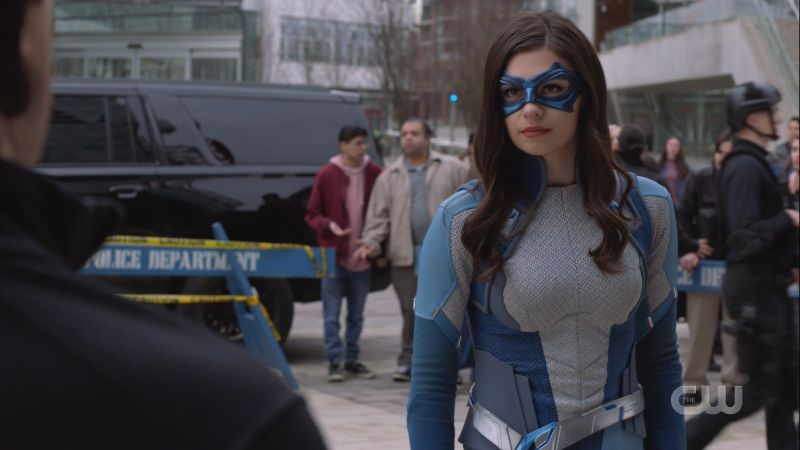 Nia has come so far from the nervous, sleepy reporter we first met and I love her so much.

Nia tries to ask him questions, what language is he speaking, how is Lex involved, but he won’t answer, of course. So she tells him to pick a side or she’ll do it for him.

Kelly and William take Eve’s name to Andrea but she’s so sick of their shit. Gemma herself recommended Eve, there’s no reason to assume Eve is a problem. And if they don’t stop bothering her with their conspiracy theories, they’re fired. 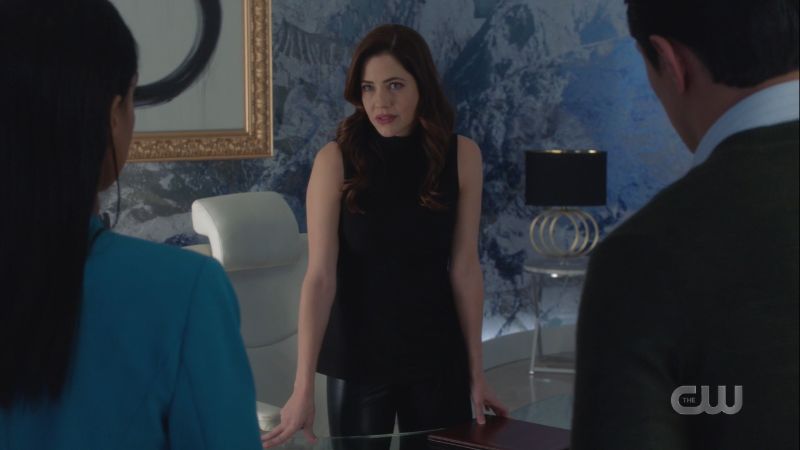 At this point I genuinely can’t tell if she’s playing them or prefers to be willfully ignorant to keep her company going. But she’s a boss bitch and I can’t help but hope she’s on the right side of this.

At the prison, Lex tells Lena that things have calmed down with the prisoners, but Lena’s not feeling calm. She smashes one of her machines to the ground. Non Nocere is dead. She’s realizing now what she was hoping to avoid having to admit. Pain is a necessary part of life. Humans will always evolve to protect themselves, and sometimes protecting themselves means causing someone else pain. She sees that now. She feels foolish for trying. 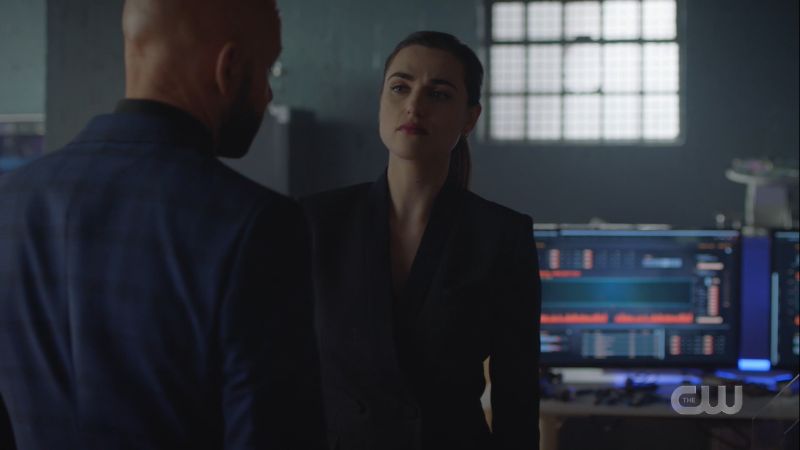 “Alex Danvers is smarter than you, anyway. I should have worked with her.”

Lex agrees that humanity can’t be changed, but thinks they need to be controlled. By a human. Lena sees the knowing glint in her eye and knows which human he means. Lex says they should join forces and be humanity’s saviors. Lena laughs at the word. 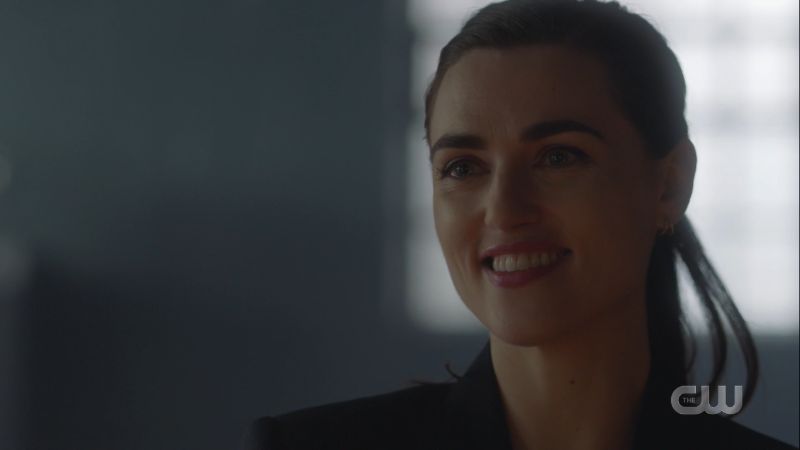 Lena sees her brother clearly again for the first time in a while. He knew she would fail. He was planning on it. But then,when Lex realizes his cool, collected manipulation isn’t working this time, he flips. Starts screaming. He says he did everything for her, he helped her, he needed her to fail on her own terms so she could see he was the only one who could save humanity, that she needed him.

But Lena looks him square in the eye and says that just because he’s a monster doesn’t mean she has to be one, too. 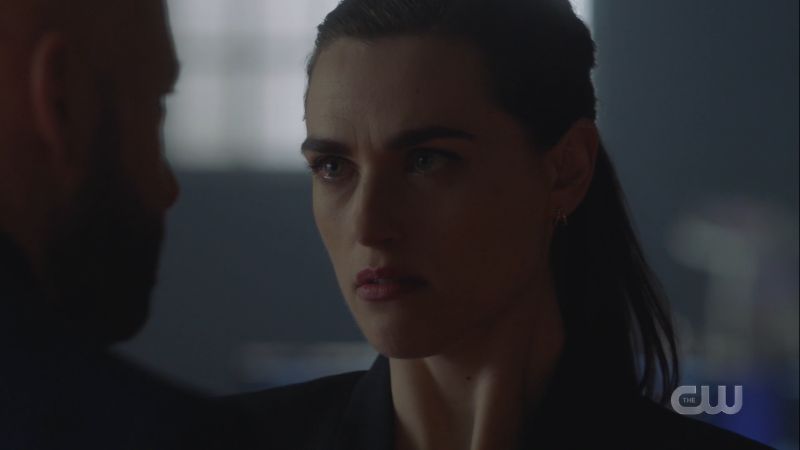 At the Tower, Kara is freaking out about Leviathan having Krytponite. Without Lena to build her another kryptosuit, how is she supposed to stand a chance against these gods? J’onn tells her they’ll figure something out, and then when Kara leaves, he has a romantic moment with M’gann. And again I ask…why? Frankly I’ve been burned by so much TV, I’m afraid for M’gann’s life right now. It feels like they’re setting her up to die. But I’m hoping that’s my own bias and that they just needed extra bodies for the final boss battle.

Alex heads back to her apartment to find Kelly there, drinking. 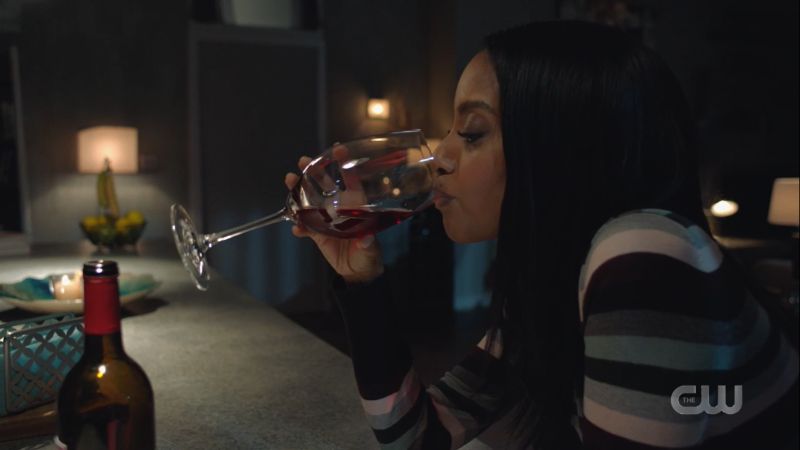 Me thinking about how much of Alex and Kelly’s relationship development happens off-screen.

Alex tells her about her day and how she feels bad for taking risks and putting Pete in danger. She just feels so…lost without the DEO. 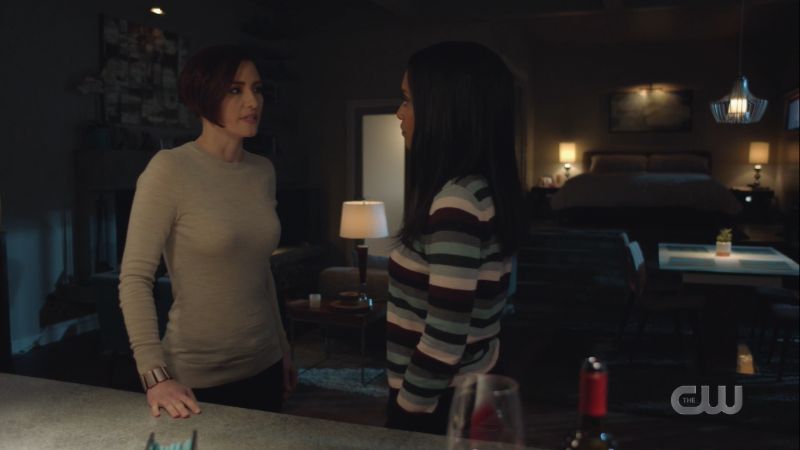 Ladies, I don’t think the pandemic has reached National City yet, you don’t have to practice social distancing.

Kelly tells her girlfriend about HER day, about Eve Tessmacher and Andrea’s threats. She needs to get sneakier, and maybe Alex should, too. 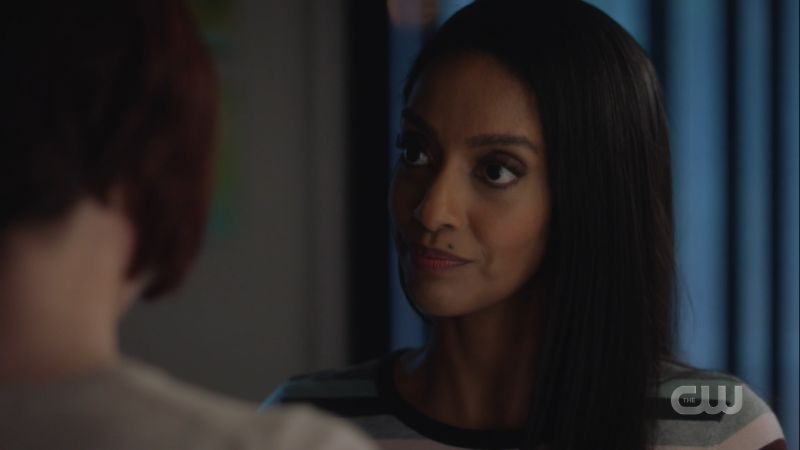 “Didn’t you tell me that hot lesbian superhero in Gotham wears a mask?”

They talk about maybe getting Alex a vigilante alter ego and I am HERE! FOR! IT! 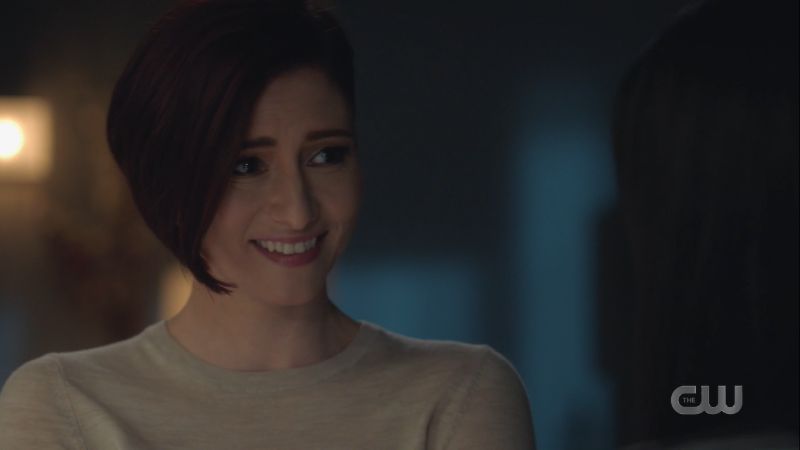 A few more things get tied up before the most important scene in the episode: Lex blows the prison up, Gemma invites him to the Leviathan ship, Brainy confronts Lex, who says things are going according to plan, William goes to try to meet Eve in a back alley because he’s apparently an idiot, and ends up getting kidnapped, etc, etc.

This last scene is one of the most beautiful scenes on this show in a good, long while. Kara gets a knock on her loft door, and when she opens it, everything goes totally still. No score underneath, no sounds, nothing. Just stillness and silence as the camera slowly pans to reveal Lena Luthor at her door.

Without saying a word, Kara steps back from the open door. A silent invitation. A gesture that shows that though she might not have the words to invite Lena in, she might have the room to let her in. 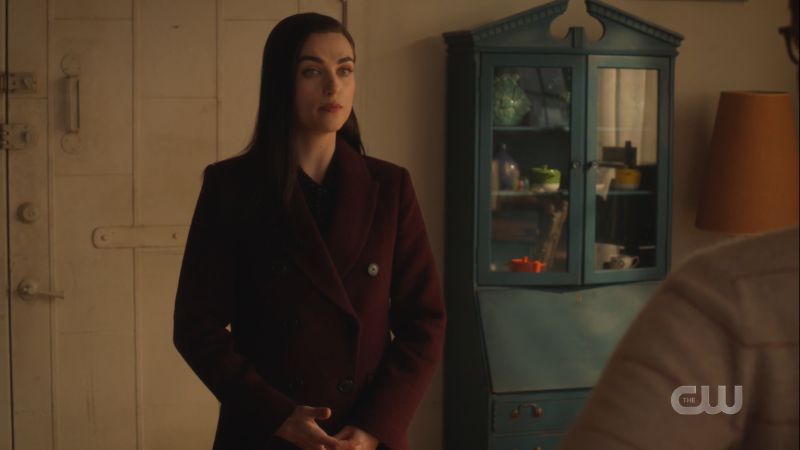 “I will not let anything, take away what’s standing in front of me. Every breath, every hour has come to this. One step closer.”

Lena takes a wavering breath and says, “I have made a terrible mistake.” Lena sets aside the Luthor pride that was drilled into her from years of being raised with and by sociopaths, she moves through the grudge she was clinging to like a life raft, she musters up all of her strength, and she apologizes to Kara. She says she was genuinely trying to do something good, she wanted to take away people’s pain. She was tired, so tired, from being hurt over and over and over again, so she thought this was the only way forward. Tears start to fall from her eyes as she tells Kara she was right, she was acting like a villain. Kara looks uncomfortable at the reminder. 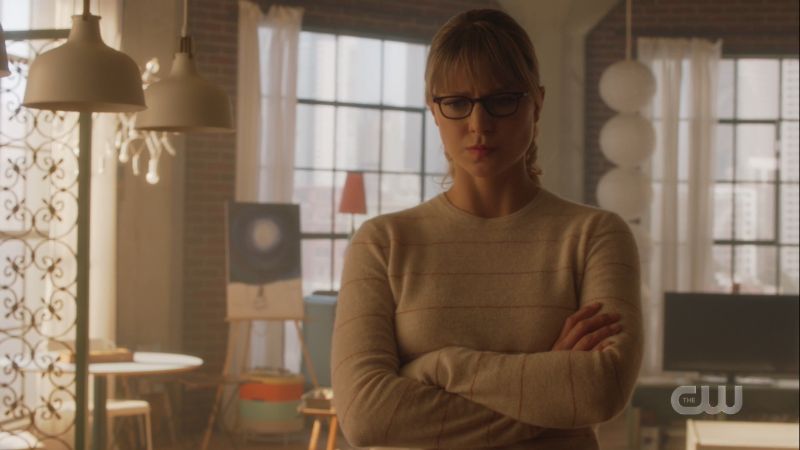 “I have died every day, waiting for you.”

Lena says that she went down a dark path and couldn’t see that she was setting the forest on fire to try to save the trees from being chopped down. She knows it’s too much to ask Kara to forgive her, so she won’t even try. All she wants is for Kara to listen. She tells Kara that Lex is working with Leviathan, and manipulating her tech to do something terrible via Obsidian. She didn’t realize until it was too late that she was unwittingly helping the enemy. She wants to help stop them. She wants to help KARA. Please. 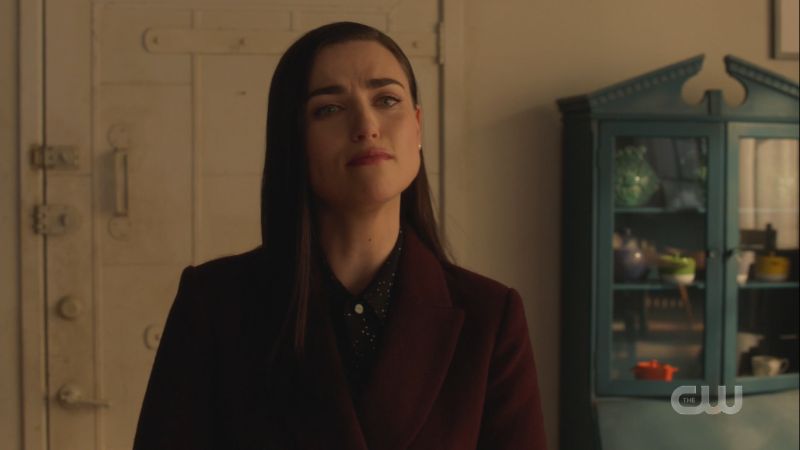 “I’m just a Luthor, standing in front of a Super, asking her to love her.”

Kara takes a deep breath and considers this woman who stands before her. The person who has hurt her more than she’s been hurt before, because of how deeply she cared. The person she’s hurt deeper than she’s hurt anyone before, for the same reason. The woman whose mother and brother are evil geniuses but who has stood by her side time and time again. The woman who didn’t know she was Supergirl, but saved her life anyway. Before this moment, Kara was afraid to reach out for hope that might not be there. That they were too far gone now, too many bridges burned to find their way back to each other. And honestly I worried the same. But now, watching Lena be more vulnerable than she’s ever been, doing two of the hardest things anyone can do – admitting that she was wrong and asking for help – Kara makes her choice. She reaches out. And she pulls out a chair, offering Lena a seat at her table. 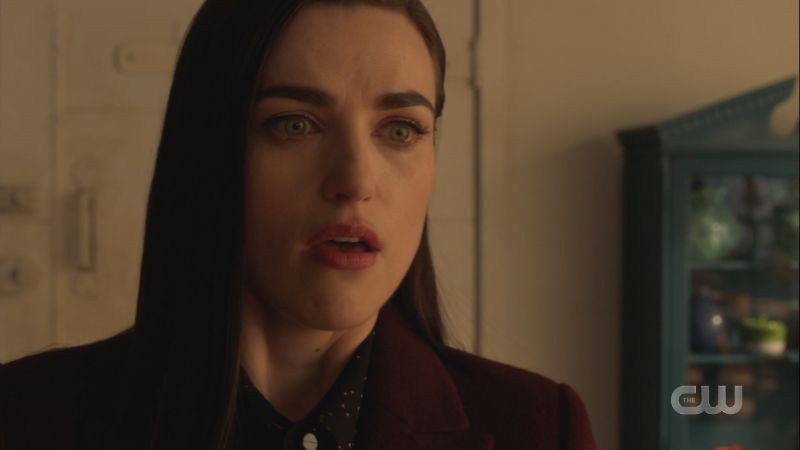 Lena’s wild relief, the breath she let out like someone lifted a 50lb weight from her chest…I felt it. I share it.

I thought this moment was beautiful and poignant and it gave me more hope for the rest of the season than I’ve had for a while. Even though sadly now there’s only one episode left. But hopefully they continue this trajectory into next season, too, and we get back on track with Lena and Kara breaking the Luthor vs Super mold and working together.