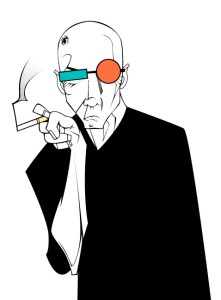 Hello Friends! Today we are going to discuss one of my favorite comic book writers, Warren Ellis. Here at Technostraddle, we want to get you all educated-like on comics for a number of reasons:

#1: We want you to appreciate the medium of the comic book! What other art forms are in such an energized and nascent stage? I don’t know, but comics are!

#2: We will look less like nerds and more like hip underground culture prophets if you start liking comics too!

#3: Reading good comics isn’t just in the best interest of your sensitive artsy side.

While we already learned that girls inside comics can be super-sexy, know this: girls who work at comic book stores tend to be super cute, too — nay, adorable! They’ll be impressed with your taste in comics from the get-go when you saunter in and request the comics mentioned in this article, which you’ll no doubt print later and paste onto tiny note cards. But maybe you should memorize the lists from our subsequent “Start Reading Comics!” segments, so as to not attract attention. Or at the very least, buy smaller note cards. 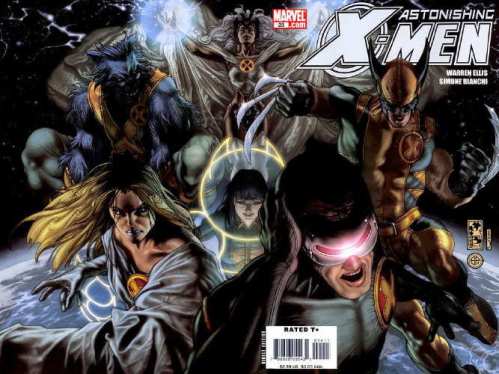 Warren Ellis is an excellent point-of-entry for those of you who aspire to one day spend heaps of money on comic books, but don’t know where to start. He’s like a gateway drug. Well, probably more like a “fix” or a “monster bong hit” because he’s so DARK.

Warren Ellis is basically a sci-fi satirist who employs dark humor, violence, and a f*ck-ton of profanity to get his point across. Think Hunter S. Thompson times Kurt Vonnegut divided by Ray Bradbury. Ellis is one of a few comic book writers who’s equally skilled at creating story concepts and writing dialogue for those conflicts.

His original storylines (like Transmetropolitan and Planetary) are basically thinly-veiled critiques of most any societal institution you can think of: politics, industrial society – you name it! Beyond his original material, Ellis can impress even seasoned comic book readers by exploring whole new dimensions of some of the comic industry’s most well-known and loved characters (and when it comes to the X-Men, it takes a a lot of talent to bring something new to the storytelling table these days).

Other than me and your neighborhood’s comics store hotties, a lot of other folks will attest to Warren Ellis’ greatness: like bigshots Alan Moore, Joss Whedon and Garth Ennis. But don’t take their word for it, take mine: 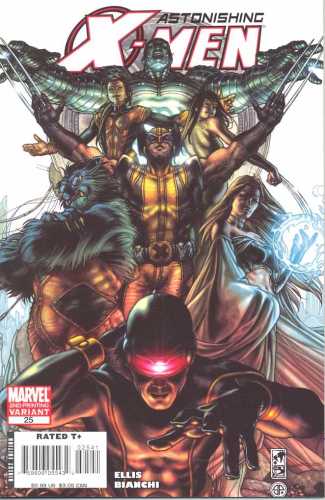 Ellis and Bianchi picked up The Astonishing X-Men where Joss Whedon and John Cassaday left the series. And while those were pretty epic shoes to fill, they’ve made the transition out of the Whedon-era remarkably easy. The Whedonites will be pleased by the dry humor and clever banter between characters, and while I LOVE John Cassaday, Simone Bianchi is nothing short of genius. Every panel is a work of art that perfectly compliments Ellis’ moody writing.

Beyond style and looks, Ellis gives us a lot to love in the story. His Astonishing X-Men makes for some very busy and very fast-paced story arcs. Basically the X-Men (Cyclops, Emma Frost, Armor, Beast and Wolverine this time around) are protecting San Francisco (where the gays are! Hooray for X-Men’s never-ending LGBT rights/mutant rights parallel!). After investigating a gruesome murder, they figure out that some asshole is trying to manufacture mutants. Storm comes back to help (she is fabulous/ the Queen of Wakanda now btw), Beast and S.W.O.R.D. agent Abigail Brand get it on, and Forge goes totally bat-shit crazy. But seriously, Hank McCoy (Beast) really, really needed to get some.

Emma Frost to Hisako (Armor) after she complains about needing a new X-Name:

“Yes indeed. And you also need a new uniform with some personal expression to it. Some art, some elan. Always remember, the presence you create is quite as important as being able to chop wood with your teeth or whatever it is Logan [Wolverine] teaches you.” 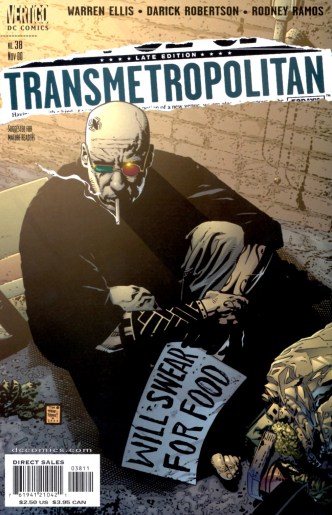 Set in an undefined future year, Transmetropolitan tells the story of a gonzo-style journalist named Spider Jerusalem on his adventures navigating madness, the world of print journalism (so edgy! who knew?!) and you know, general badassery. Robertson’s art is solid and the art enhances the writing rather than distracts the reader from it, which I find happens to me a lot when I read Astonishing X-Men.

Transmetropolitan is an excellent tool for transitioning from the world of Real People Books to the world of Comic Books as it’s very cerebral and heavy on internal dialogue, so you can still talk about it to friends and pretend that it doesn’t have pictures. If you’re one of those types, that is.  As a warning, Transmetropolitan is super-duper vulgar with profanity-on-top. So be ready for that, you lovely and also delicate flowers. The series also tackles a number of unsettling themes, but this is a dystopia after all, so I’m not sure you were expecting fairy princesses and the like. No princesses here- Keep movin’!

“There was a time when I liked a good riot. Put on some heavy old clothes that could stand a bit of sidewalk-scraping, infect myself with something good and contagious, then go out and stamp on some cops. It was great, being nine years old.” -Spider Jerusalem 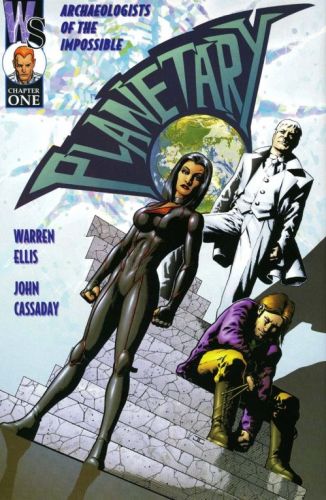 Remember how much I love artist John Cassaday?! Look, he and my homeboy Warren did a comic together! But just like with Robertson & Transmetropolitan, Cassaday’s art underscores the writing without eclipsing it. Planetary started its run in 1999 but then went on vacation between 2001 and 2003, so the book wrapped up just before Christmas 2009.

In Planetary, Elijah Snow, Jakita Wagner (who is a fox, btw) and The Drummer make up a team supernatural archaeologists. Your first thought might be something along the lines of “WTFBBQBRB” but stick around, you crazed abbreviators. Supernatural archeologists mainly get to unearth crazy/awesome shit, like tgiant ant monsters and mutant dinosaurs and stuff! They also deal with people from other dimensions and conspiracy theories. Supernatural archeologists are so well-rounded! It’s like an X-Files throwback, but with Ellis’ brains and Cassaday’s artistic brawn! I’m really all about Planetary right now. You probably should be too- then we could have a book club!

Jakita to The Drummer and Elijah as The Drummer jumps up and down on a just-dug-up giant mysterious artifact:

Elijah: I don’t know, Drummer. Maybe it doesn’t need you because it already has a pet living fart.

Jakita: Drums, for God’s sake… get off the find. Why do I even have to say this? Why do I have to say ‘get off the unique and probably alien living plinth that zaps the unwary’?

I have here captured several of my numero uno personal favourite Warren Ellis tweets, for your pleasure and edification! Ellis’ tweets contain as much dry humor as his writing and they never fail to brighten my day. His good morning and goodnight tweets are oh so very Ellis. That is to say they are amazing and perhaps not for everyone. 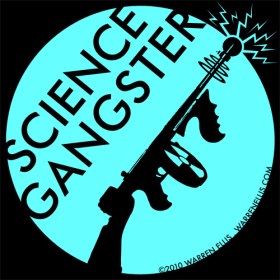 Don’t have enough Ellis to get ya started yet? Here’s one more thing- perhaps even the Last Thing in this crash course! Each week Ellis puts something crazy, hilarious, and/or completely random on a T-Shirt and sells it in his CafePress store. And I’ve always found it indisputably true that the way to a girl’s heart is through a V-Neck with an obscure graphic on it.  And yes, factually you would locate the organ of her heart beneath said V-Neck, but also there’s the organ of love to consider here!