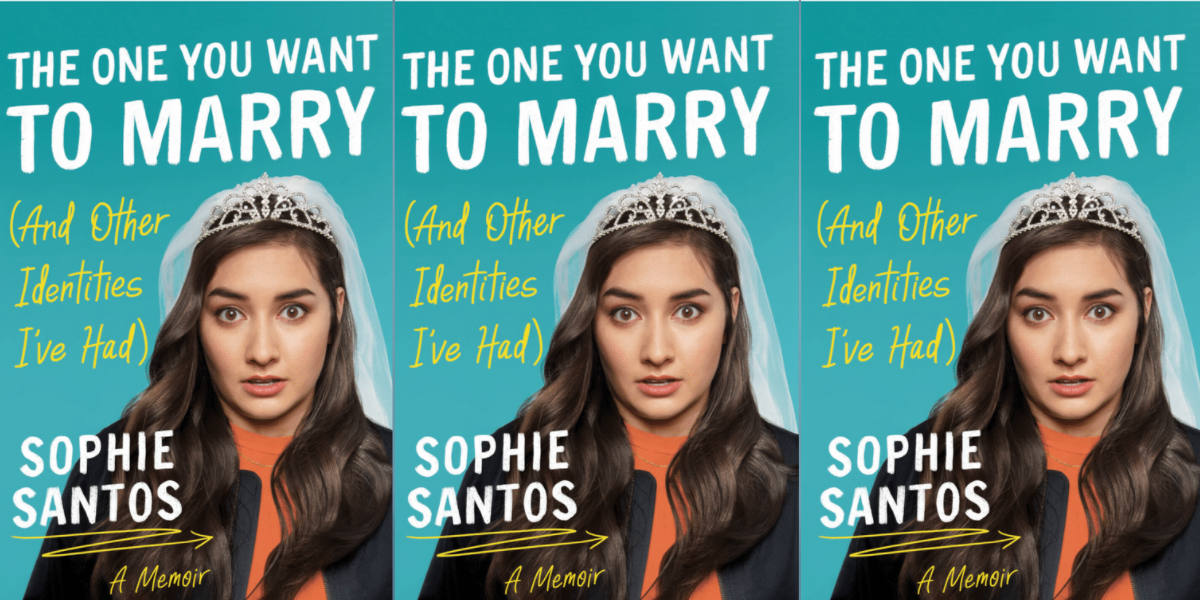 I’m going to assume we’ve all seen the Beyonce Pepsi commercial. You know the one, where Beyonce dances in a mirror with herself from some of her most iconic eras? Reading comedian Sophie Santos’ new memoir The One You Want to Marry (and Other Identities I’ve Had), in which Santos walks through the many phases of her life, reminded me of that commercial, though with less intricate choreography and more awkward stories.

When I came out, I wanted to split my life into two eras: before I knew I was gay and after I was gay. I thought that’s what coming out was, and I wanted everyone to say goodbye to that girl they thought they knew because now I was my True Self. The old Analyssa can’t come to the phone right now, she’s busy kissing hot queer people! I was embarrassed that my whole life hadn’t been gay, that I’d done ballet instead of basketball, that I’d dated my high school quarterback, that I’d been in a sorority. When I went to A-Camp for the first time my junior year of college, I was equally as sheepish about being in a sorority as I was about not knowing my sun, moon, and rising sign. (I’ve learned since them!)

Of course, no one’s life is split into two simple chapters. A self-proclaimed chameleon, Santos lets all of those former eras of hers live right next to each other in the mirror: a tomboy youth spent playing on the boys tackle football team, emo theater kid, pageant queen, Southern sorority sister, and finally an out and somewhat “calm” (to use her mother’s own words) lesbian. I feel required to say that many of my eras before coming out match up with the ones Santos shares in her book. Mixed-ethnicity kid, surrounded by a lot of white people? Yep. High school girly-girl? Facebook pics to prove it. Theater kid? Big time check. Sorority girl? Check (though I went to undergrad in California, I did apply to the University of Alabama, where Santos eventually rushes a sorority). Santos even lived in my hometown of Kansas City for a while growing up! I recognized the dance school where she took classes at, the outdoor amphitheater she mentions (Starlight Theater, where I saw Avril Lavigne once), and the football team she roots for — before they were good.

If Love and Basketball as a pop culture reference doesn’t land for you, there are plenty more where that came from, an eclectic mix of millennial touchstones. There’s Disney Channel Original Movies, Sum41, and musicals from Spring Awakening to The Last Five Years. Who among us hasn’t watched the movie Selena and felt like spending the whole week afterward in mourning? And all of that is before Santos describes her (extremely familiar) path down the rabbit hole of media featuring queer women. Starting at YouTube videos of Olivia Wilde in The OC, which led her to Grey’s Anatomy and then to Imagine Me & You, But I’m a Cheerleader, Joanne and Maureen in Rent, and of course, The L Word — which Sophie watches obsessively in her room for months. My own path might have started at MTV’s Faking It, which I watched while living in my sorority house sophomore year, but it eventually led me to the same places.

The book is just as honest about the parts of finding yourself that aren’t always fun, Santos’ experiences with depression, anxiety, and OCD are all talked about. She calls her rock bottom a moment when her “inner chameleon had changed so drastically that [she] didn’t recognize the person in the mirror.” It’s not always flattering to Santos, and that frankness helped me keep rooting for her, even when she talks about things like treating people poorly in her romantic relationships, especially right after coming out. It might be painful to read for anyone whose first queer relationship wouldn’t hold their hand in public, or anyone who’s been cheated on, but it’s refreshing to hear someone own those mistakes as part of their journey. You don’t come out and suddenly transform into the best version of yourself. It takes work, and sometimes a bad haircut and a few bad tattoos too.

There are a few missteps in Santos’ book. Not all of the jokes land, especially some of the “edgier” ones. I reread the chapter about Santos’ first queer hook-up, Gabe, a few more times after Santos says that Gabe is now out as trans, because the pronoun use was very specifically gendered. Since Santos says she and Gabe are still good friends, I assume this is something the two of them have discussed and I don’t need to mind their business, but it felt odd to read. At one point while discussing her early gay dating escapades, Santos says she wanted to “debut as a stud.” In context, she seems to use the word more like “heartbreaker” or “player,” but because of its significance as an identity in the Black queer community, it’s an odd choice of word for her to use.

The book is long, and the last section is more current, as Sophie moves to New York, starts her comedy show “The Lesbian Agenda”, meets her girlfriend Amy, and attends a high school reunion. The book is at its best before this section, when Santos has the hindsight to look back on chapters of her life and draw meaning from them. It’s nice to hear that she has found success but it feels less polished, more caught up in granular detail. Perspective on each chapter can only come from having closed it, and it feels like Sophie is still living in the middle of this one, figuring out how she will define it and how it will define her.

As a former sorority girl and recovering theater kid, Santos memoir was always going to speak to me, but I think it’s a fun read for any weirdo who jumped from group to group, never understanding why they didn’t fit in perfectly until they realized some big truths about themselves, and understood that no one ever truly feels that they fit perfectly. In the end, Santos doesn’t get to dance in a mirror in front of all her baby gay phases, but she comes close. She goes back home to help her mom go through storage boxes, full of memorabilia and memories from her different eras. Pepsi commercial or not, it’s a fitting end to a story that’s less about coming out and more about finally coming into your own.

“The one you want to marry (and other identities I’ve had)” — is out everywhere on October 1!

Analyssa has written 39 articles for us.