We talk about documentaries a lot here on Autostraddle, and that’s for a good reason. Documentaries, in a way, are our new oral tradition. It’s passing down stories, but with more technology. It’s storytelling, because often, the best stories are entirely non-fictional. They keep cultures and ideas alive for the people who live within them, and they bring cultures and ideas to life for people who have never heard of them. In a culture where history is dictated by the victor and smaller communities are often erased from mainstream dialogue, oral tradition is a way to keep stories going.

SIGNIFIED is the series so nice, we’re talking about it twice. The project is a multi-platform, rad-as-fuck film series brought to you by Brooklyn-based artists/educators Anna Barsan and Jessie Levandov, which Riese first mentioned back in August when the duo was doing their official launch in NYC. Now the series is coming to Washington, D.C. (!), with not one, but two screenings. The first is this Friday, November 11 at Columbia Heights’ Bloombars, and the second is on Sunday, November 13 at The DC Center, a super-awesome U Street community space for queer resources. 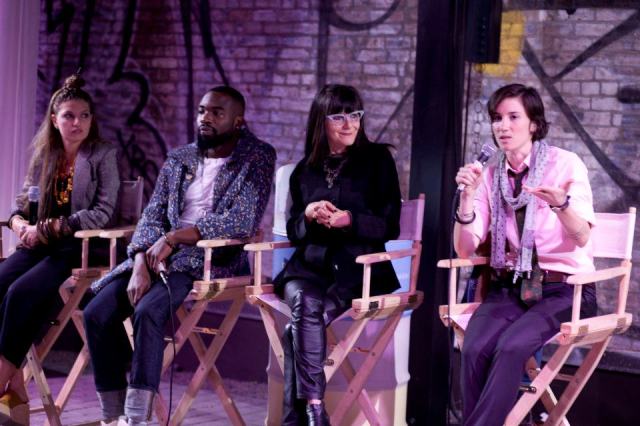 SIGNIFIED creators and subjects at the series launch in new york, via Signified on Facebook

Of course, if you can’t make the screenings, you can also watch the series here.

And it’s not finished. The last time we talked about SIGNIFIED, they were celebrating the launch of Season 1. Now the season has wrapped, and they’re looking forward to Season 2. And that’s perhaps one of the best parts about the series — it’s an ongoing project that gives you an ongoing opportunity to participate an become engaged on any level. The SIGNIFIED website features not only the video profiles, but also a list of educational resources, as well as information about the Salon, an ongoing interactive workshop that brings the conversation to a physical space. Like many independent artists, much of their funding comes from community support. You can pledge that support on their project page here.

SIGNIFIED is important because it’s something queer, just like you! It’s a thoughtful, intelligent and accessible take on queerness as a culture, as a history, as theory and as art. It reflects the way in which queer communities have shaped and sustained themselves — through storytelling, shared experience and action. If we can’t have conversation, then we can’t have progress. If we ignore our history, we can’t have a future. Knowing what came before us is more than just avoiding the mistakes of the past, it’s contributing to a richer living of the present. So come have the conversation, okay?

Just in case you forgot what the trailer looks like:

And, if that’s not enough convincing for you, the duo’s first interview and most recent episode features the rad individuals of Bklyn Boihood.

Cool? Cool. See you there.