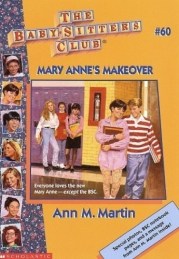 BABYSITTERS: Hey, do you remember the Baby-sitters Club books? YES YOU DO, you read them every day, that’s how you learned about diabetes and fashion. The New York Times reports that in April Scholastic will reissue repackaged and slightly revised versions of the first two volumes of The Baby-Sitters Club “in hopes of igniting enthusiasm in a new generation of readers.” What do we think of this idea? Besides that the cover redesign leaves something to be desired. And that something is cover illustrations (hello we need to plan our outfits) and alphabet-block letters.

Jezebel wrote about the revamp yesterday and one of our top concerns is addressed in the comments section there:

+ “I feel like [updating the books] is sort of impossible, in much the same way that I thought the Sweet Valley rewrites were impossible … So many tense plots can be solved by “But they had a cell phone.” Are they just going to rewrite them all to be like. “Marry Anne’s cell phone had just run out of out batteries when…”

+ “Doesn’t the entire concept of the club completely fall apart if you update it? I honestly can’t see the concept of “we meet three times a week and people call us for jobs at that time and only that time” working in the modern world. If we were updating them at the end of 90s, I could see them starting some kind of babysitting website, because that was the time of the magical internet that can do anything, but even that seems dated today.” 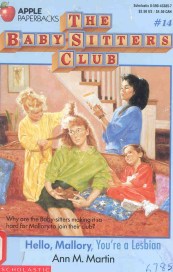 Margaret at Jezebel has hesitations about the quality of the literature itself and whether just being more wholesome than Gossip Girl is really justification for encouraging young women to read these books: “I have nostalgic feelings about the series, but seeing my daughter embark on the same quest to check off every box on that list in the back of the books would break my heart.”

Jezebel’s wish-list for the revamp includes some pressing issues in need of clarification (what is Dawn’s “California Cool,” exactly?) and plot devices in need of repair (Mary Anne is supposed to be “shy” but she ends up just being “boring”). Our wish list, of course, relates to the hidden gay agenda and we thought this revamp is a perfect excuse to dig up Autostraddle TV Editor Carlytron’s copy of “Why Mallory is Gay,” written as a gift for Carly by her friend Jane several years ago.

The evidence for “Why Mallory is Gay,” transcribed as written in the original document, includes:

+ When the “gang” head out in the storm with Lucca to rescue Kristy from drowning in the pouring rain, Mallory is seen wearing plastic yellow overalls, galoshes and matching hat.
+ While there is no proof to this statement, Mallory was surely uncomfortable having to be crammed in a small car with Lucca, a boy, considering she “hates boys” (this fact taken from the book Mallory Hates Boys (and Gym) in which she explains her disgust for the two aforementioned items).
+ Mallory‘s clothing brings up certain questions. Consisting mainly of suspenders, shorts and button down shirts, her wardrobe is rather un-heterosexual. She is also seen to wear ties on occasion, an accessory associated with males and lesbians.
+ When Kristy goes off to see her dad and the members watch her get into his car, one exclaims, “Kristy has a boyfriend?!?” Mallory’s reply is, “The world must be flat.” This is clearly a reference to the fact that Mallory is infatuated with Kristy and believes that there is a chance at a relationship…

MARRIAGE: What better way to start out 2010 than by thinking about all the lesbians, gays and other queermos who can now get married in New Hampshire? SheWired has a lovely little piece on how “despite the bitter cold New England weather, about 150 people gathered in the state capital of Concord to witness the marriages of about a dozen lesbian and gay couples by a justice of the peace as the New Year dawned.” Congratulations on having the most epic midnight kiss ever, ladies! (@shewired)

In other heartwarming news, the man who first sued Washington, DC for the right to marry his partner twenty years ago is finally seeing his dream come true. Craig Dean and his boyfriend Patrick Gill applied for a marriage license in 1990, and their fight was incredibly courageous in a time when no one, not even most gay advocacy groups, thought they had a chance. “Just filing for the marriage license made many established gay groups angry. Some thought the pair was asking for too much and feared a backlash. Lambda Legal Defense Fund executive director Tom Stoddard called their challenge “shortsighted.” Although Gill tragically died of AIDS in 1997, Dean’s current partner proposed on Christmas, and a long-delayed wedding seems to be in his future. As the DC marriage bureau said, “The first name on the list should be the one who is waiting 20 years.” Congratulations, Mr. Dean! (@latimes)

MEGAN FOX: Apparently, your favorite part of Jennifer’s Body was not Megan Fox’s; she’s been quoted as saying she didn’t enjoy her kiss with Amanda Seyfried. As per ushe, our number one feeling about Megan Fox is “confused.” Is this an annoying thing for her to say, or actually an actress’s critique of the creepy Hollywood-girl-on-girl-kiss-for-the-enjoyment-of-straight-men thing? You decide! “You’re in a room and it’s full of these middle-aged crew guys who are eating their sunflower seeds waiting for you to get it right so that they can go home to their kids.” Either way, I think we can agree it is weird that the Times of India is the only one to pick up this story. Really, Papi? Really? (@timesofindia)

LESBIAN SEX BRAWL: Dear Australia, how do you manage to have so many crazy lesbian headlines? We’ve already seen at least one lesbian teacher sex scandal, but this one goes above and beyond. “Nepean High School teacher’s assistant Sharron Anne Lee, 40, was involved in a threesome at a drunken New Year’s Eve sex party which later descended into a brawl, The Sunday Telegraph reports. Parramatta Bail Court heard yesterday that Lee, a teacher’s assistant, had fought with her girlfriend of three years, Carlie-Anne Bell, from Glenmore Park, in her bedroom while the man they had picked up at the Penrith Panthers club, Nikola Murgevski, watched on horrified.” Other phrases this article contains: “severe bleeding,” “grievous bodily harm,” and “bowel lining.” (@heraldsun)

CUSTODY CRISIS: In decidedly less fun (actually really awful) news, “ex-lesbian” Lisa Miller has confirmed everyone’s fears and skipped her Jan. 1 court date to return custody of their daughter Isabel to her former partner Janet Jenkins. Lisa Miller and Isabel’s whereabouts have been unknown for weeks, and the case has officially turned into a kidnapping.

LILO: We mentioned that Lindsay was spending New Year’s in St. Bart’s; we did not show you these pictures, however, nor did we share that she was apparently on a giant boat full of bellydancers the whole time? She looks really good! As long as you don’t look at her tiny, upsettingly skinny ankles!

ALSO: This girl is wearing a fedora and says she wants to be Lindsay when she grows up! Good idea/bad idea? Welcome to 2010! “Years from now when we’re huddled in old cars hiding from our robot overlords, I’ll turn to the frightened family who traded me some boots for a can of beans and say “I knew this was coming the moment I saw that young girl say she wanted to Lindsay Lohan’s ‘double. I can’t embed the video, but click over and check out what the end times are gonna look like! (@the superficial)

GAGA: Remember the huge and super expensive New Year’s Eve show President Gaga was doing? Photos and reviews are starting to reach the interwebs, so even if you couldn’t afford a ticket you can still check it out vicariously. In other news, apparently Chris Brown was there? How do you feel about that? And the wig? The keytar?