.
Later today on Autostraddle: It’ll be a surprise! Who doesn’t love a surprise?

Tonight. April 18th. HBO. Grey Gardens. Premiere. Be there or be really confused when everyone else is talking about it and you’re like what the hell is going on. In Newsweek, Alan Cummings explains how The Beales became gay icons. 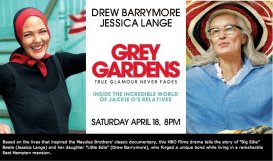 The Family Research Council could manipulate your mind with weather-related advertising, but instead they’ll just manipulate the statistics on how New Yorkers feel about gay marriage. (@goodasyou)

I want this show GLEE to get picked up so bad! Jane Lynch! And they use the word gay many times!  And SINGING AND DANCING! Countdown to May 19th starts now! It’s so GAY! (@smoking cocktail)

“Why are we so shocked when “ugly” women can do things … Men are allowed to be ugly and talented. Gordon Ramsay has a dried-up riverbed for a face. Justin Lee Collins looks like Cousin It from The Addams Family. Graham Norton is a baboon in mascara. I could go on …” It’s not Susan Boyle that’s ugly, it’s our reaction to her. (@the guardian uk)

Thought there were no funny jokes left to be made about NOM? Think again:

Wendy & Lisa come out as lesbians and discuss their music and their experiences with Prince & The New Revolutions: “[Prince] is a girl, for sure, but he’s not gay. He looked at me like a gay woman would look at another woman.” (@out magazine) 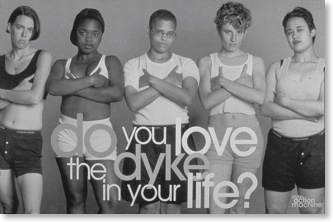 Top G.O.P Consultant Endorses Gay Marriage. I hope this means all the holier-than-thou assholes are going to move elsewhere, leaving lots of room for men who like to get prodded in thier assholes by other men. It’s the weekend! We’re independent moneyless media we can say dirty things all we want! HAAAY! (@ny times)

[“Do You Love the Dyke in Your Life?” graphic from the Dyke Action Machine.]

from Alex: I’m usually not into sports if they involve men (sans bathing suits) but I found it very interesting that “during the second game ever hosted at the most anticipated ballpark ever constructed in the most populous, richest city in America’s history” that most of the luxury-priced $500 seats were empty. I feel like this speaks volumes about a lot of things, not only the economy. I’ll be back with an update, as I’d like to get Lozo’s thoughts on this matter. He likes sports.
Update: Dave Lozo has issued the following statement: Dear Alex, my thoughts on that are this: HAHAHAHAHA!!!! Bah dah bah bah bah, I’m lovin’ it.

from Riese: It often seems like life would be so much easier — somewhere, anywhere else. Somewhere with more sunshine and silence and water and mountains and rooms built for real grown-ups. Then New York Magazine reminds us why people still want to move here: “Even in these times, almost half of young America wants to move to New York.” First-hand accounts follow from people like Chloe Sevigny, Ira Glass, Rufus Wainwright, Amy Sedaris, Diane Von Furstenberg, Maggie Gyllenhall and Chuck Close.

Also! Late add: What Would Andy Warhol Do on the Internets?