feature image via The FADER/Chantal Anderson

You got different people you go to that raise you up in particular ways. I go to Toni Morrison when I need family explanations and usually family curses. I got to Beyoncé for the the little black femme in me that I gotta smush down. I go to Noname when I want to be powerful and overflowing and strong enough to look my memories straight in the face. I go to Noname when I don’t want to pretend like institutional racism and the constant violence against and death of black people hasn’t fucked me over. I go to her to to learn how to tell the truth in all its messy, often bloody glory.

Fatimah Warner’s aka Noname’s new album, ROOM 25, is BLACK black blk blackity black and we are blessed. Two years after her first album, Telefone, (listed in Carmen’s 7 Albums By Women That Got Me Personally Through 2016), Noname brings an independently created project that was announced earlier this week on Instagram and Twitter and linked to a site that unlocked around midnight last night. 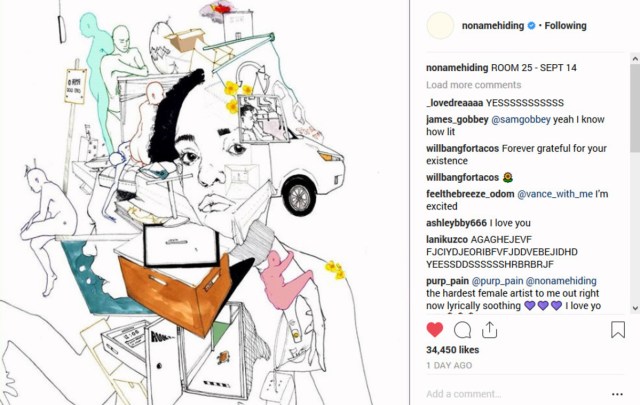 In Telefone, we were getting an introduction to Noname; in Yesterday she raps:

Who am I? Gypsy rap, Gypsy need her dollar back
And all of that, my devil is only closer when I call him back
[…]
Everything is everything, me Noname, you n*ggas doin cocaine
Me missing brother Mike, like something heavy
Me heart just wasn’t ready, I wish I was a kid again

— knowing that even though she’s being vulnerable with us, she knows she’s got to keep her guard up (“And I know the money don’t make me whole / magazines drenched in gold,/the dreams of granny in the mansion happy / the little things I need to save my soul”), and with the way people have come at her expecting her to ride on the coattails of friends who happen to be famous, she was right to do so.

ROOM 25 brings a Noname more sure of herself, secure in the knowledge that she can’t be anything other than who she is, and if you don’t rock with the first few lyrics, you’re more than welcome to leave. In the first song off the album, Self, she raps:

“My pussy teach ninth-grade English
My pussy wrote a thesis on colonialism
In conversation with a marginal system in love with Jesus
And y’all still thought a bitch couldn’t rap huh?
Maybe this your answer for that good pussy”

SHE STARTS THE FIRST SONG TELLING US WHAT HER PUSSY IS ABOUT AND WHAT HER PUSSY DOES. She doesn’t even do it on a purely pleasure level (which is still cool), she’s showing us her pussy got life in all kinds of places and we gotta respect the work it does everywhere. If that is not an anthem we all need then I can’t help you here. She got me so hyped about this I’m trying to write odes to my own pussy (which isn’t easy for a black nonbinary butch).

The rest of the album follows suit, calling Noname nothing but herself and that kind of honesty convinces the listener they’ve got to try to do the same. She questions whether anyone will remember her especially the best parts of her, berates the systems holding her and her loved ones captive, tells us about a love she wanted but understands doesn’t want her anymore and how she knows she’s got to stop looking outwards for someone to take better care of her.

With Noname, all the instruments lull you into a place where you’re in easy listening mode, but her lyrics make listening anything but easy. And that’s not a bad thing. It’s an amazing thing to have listeners studying your Genius page to get their own lessons in internal rhyme, clever wordplay, and fire delivery. Fans of Telefone will be happy to know that the lyrics and rap delivery get even better, possibly even faster.

As I said before, it just feels so black. With artists who seem to tiptoe around issues pertaining to race, Noname doesn’t jump in, she’s already wading in the water, waiting for you. You know this is for black people because there are only things you get if you grew up like this. With samples from The Spook That Sat By the Door in Blaxpoitation to the verses covering colonization, prison, police brutality, and God in No Name, the last song off the album, the entire work feels like sitting in your uncle’s backyard during the barbeque. Your aunts are dancing to Prince, uncles are telling you “you don’t know nothin bout this right here!”, your dad and his buddies are cursing each other out over cards, and you and your cousins are trying to catch gossip since they called you in from riding bikes so late. Your cousins wanna check out the new game you got and you tell your mom you’re leaving, your house isn’t far away. You’ve got one foot out the door when someone related to you (probably) grabs you back, tells you “You really shouldn’t be out by yourselves after dark like this.” You try to tell them you’re not alone, you got family with you. And they shake their head, and you want to tell them you’re not stupid, that you know what they mean. But they buried their son a few years ago. You and your cousins were told he died in the army, but it turns out he made it home. It was the cops that killed him You listen to this probably family member and sit outside to listen to the crickets, the smoke from the day funneling its way towards the sky.

This album feels like all that living, some of the best of living, but the something you can never forget like thunder overhead. Noname doesn’t make that feeling go away, but she sits with you while you talk through it. And if you don’t wanna talk, she lets the music do enough of that for the both of you.

Listen to the album here.