Yesterday, notoriously homophobic Texas Governor and 2012 GOP Presidential Candidate Rick Perry was indicted by a grand jury on a pair of state-level corruption charges. The indictment stems from a conflict in 2013 when Perry threatened to veto a bill providing funding to the state’s Public Integrity Unit, which, coincidentally, is tasked with rooting out corruption in the Texas state government. The veto threat was allegedly intended to force the elected Austin District Attorney Rosemary Lehmberg, the head of the anti-corruption unit and an out lesbian, to resign her position. Lehmberg is perhaps best known for securing the conviction of House Majority Leader Tom Delay on money laundering charges in 2010, but had drawn considerable criticism following her guilty plea to a driving-while-intoxicated charge in April 2013.

Governor Perry is charged with two felonies — abuse of official capacity and coercion of a public servant — that could result in a maximum sentence of over 100 years in prison if convicted. The indictment follows months of investigation and testimony taken by special prosecutor Michael McCrum, who was appointed following a complaint by the group Texans for Public Justice and the empaneling of the grand jury. It is alleged that Perry used the threat of veto on the $7.5 million budget of the Public Integrity Unit as a wedge to force Lehman’s resignation as District Attorney. Lehman refused to resign, and Perry followed through on his veto threat. At the time of the veto, the PIU employed 35 people and had over 400 active cases, including a case involving the embattled Cancer Research and Prevention Institute of Texas. An official from CPRIT was indicted late last year on charges of improperly awarding millions of dollars in contracts without seeking bids. Texas has a notably lackluster performance on corruption prevention.The Center for Public Integrity, a national corruption watchdog, ranked Texas 27th for corruption risk, giving it a failing grade on executive accountability and an overall corruption grade of “D+”.

Lehmberg, a Democrat, is popular in Austin, and was elected to the office by a wide margin in 2008, and her re-election was unopposed by a Republican challenger in 2012. She has worked in the Austin DA office since 1976, and spent 12 years as First Assistant District Attorney before being elected as DA in 2008. She, along with Houston Mayor Annise Parker, are among the highest ranking elected LGBT politicians in the state of Texas. In 2010, she established a hate-crimes unit in her office following the brutal unsolved murder of two gay men in Austin. Lehmberg was arrested after being pulled over for erratic driving in April of last year, but took responsibility for her actions and plead guilty within a week of her arrest, accepting a 45 day jail term. A complaint was filed following her guilty plea seeking to remove her from office, but ultimately failed, and Lehman remains in office. During the hearing on her potential removal from office, numerous members of the Austin criminal law community, including attorneys and judges, testified on her behalf, attesting to her “unique qualifications” to head that office and her commitment to her work.

Not surprisingly, the reactions to Perry’s indictment were strong split along party lines. Republicans, particularly those close to Perry were quick to come to the aid of the embattled governor. Perry’s former Chief of Staff and current political advisor was quick to deride “liberal” politics in Austin, saying: “This is typical Travis County liberalism, attacking powerful Republicans on phony political charges.” Texas GOP Chairman Steve Munisteri defended Perry’s actions:

“I think most reasonable people would come to the conclusion that it’s political in nature. I think most people would feel it’s not inappropriate to exercise a governor’s prerogative to not appropriate funds to a governmental authority that’s had a government official that’s conducted themselves in a way that gives the governor pause.”

Meanwhile, Democrats seized on the news and pressed for Perry to leave office. Current Texas Democratic gubernatorial candidate Wendy Davis referred to the accusations as “troubling” and said “I have confidence in our justice system to do its job.” In a press release, Texas Democratic Party Chairmen Gilberto Hinojosa called for Perry to resign as governor:

“Governor Rick Perry has brought dishonor to his office, his family and the state of Texas. Texans deserve to have leaders that stand up for what is right and work to help families across Texas. The indictment today shows a failure of Governor Perry to follow the law. This is systematic of a broader problem: Ken Paxton is facing a possible indictment and Attorney General Abbott has refused to rule on whether Governor Perry can use taxpayer dollars to cover his legal expenses. We call on Governor Perry to immediately step down from office. Texans deserve real leadership and this is unbecoming of our Governor.” 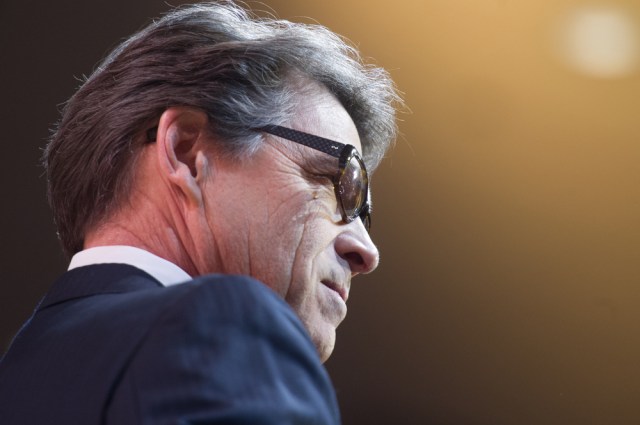 Photo by Chris Halloran, via Shutterstock

Despite his adamant anti-government-spending position, Governor Perry hired a $450-an-hour criminal defense attorney following the appointment of the Special Prosecutor, and did so at the expense of Texas taxpayers. Records show that Perry’s defense has already run up a bill north of $40,000 as of July 11, and with the indictment, that number is sure to climb.

Perry is longest-serving governor of Texas, and is not seeking re-election, and is widely rumored to be contemplating another run at the GOP Presidential nomination in 2016. A date for Perry’s arraignment on the two corruption felonies has not yet been set, but could be announced as early as Monday.

Feature image by txking via Shutterstock