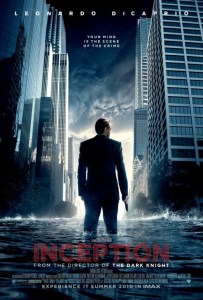 Editor’s Note: This review includes a few details that may be considered spoilers, depending on how uninformed you want to be when you see Inception.

Remember that brilliant, twisted scene in The Dark Knight when The Joker announces to those two ferries — one full of convicts, one full of civilians — that if one of the boats doesn’t blow the other one up, they’ll both explode in an hour?

Inception makes your brain feel like it did in that scene, but for almost the entire two-and-a-half-hour running time. Christopher Nolan’s latest mindf*ck, in characteristic fashion, digs up a and connects a series of these kinds of paradoxical scenarios, like some kind of subterranean, subconscious master-planned community. Unfortunately, Inception doesn’t fold up into itself as neatly as that bit of Nolan’s last Batman movie. But if you think a good trip to the theater should pay off on the drive home, you can chase all kinds of mind-bending ideas down their respective rabbit holes and see where you end up.

In the world of Inception, Leonardo DiCaprio stars as Cobb, a freelance dream-thief. He and his hand-picked team extract secrets from their marks by invading their dream worlds. But dream worlds aren’t always friendly places, and once you’re in someone’s mind, all sorts of Freudian shit can hit the fan. Stay in there too long or stir things up and a mark’s “projections” will hunt you relentlessly. And that’s hardly the half of it. In Cobb’s line of work, dreams can be strategically buried within other dreams, like metaphysical nesting dolls. Each subsequent dream builds on the foundation of the previous one, and some consequences echo through the layers so naturally its best to proceed with caution. Cobb is skilled so most jobs are as straightforward as shoplifting. Just in someone else’s brain.

“This forgettable setup is awfully pedestrian for a movie about the imagination, but it just lays the groundwork for what quickly unfolds into a sprawling, intricately imagined experience.”

And of course it’s business as usual until, in a disappointingly mundane setup, some ambiguously rich and powerful guy named Saito wants to shatter his rival’s empire. This involves getting into the dreams of the heir to the rival company and planting the seed that the company should be divvied up, which is dream “inception” rather than your usual crane machine style brainjacking (extraction). This sets the emotional stakes pretty low for the central dream heist, since the whole thing will immediately only benefit some dude’s stock portfolio and then hopefully Cobb, later, for reasons that aren’t initially clear. This forgettable setup is awfully pedestrian for a movie about the imagination, but it just lays the groundwork for what quickly unfolds into a sprawling, intricately imagined experience.

While its vast imagination is impressive, I think Inception‘s intricacies are its strongest suit. In particular, a few fascinating, feel-it-in-your-bones experiences resonate, like the “kick” that happens when you snap awake from half-sleep because you feel like you’re falling or the moment you realize you’re in a dream because you don’t know how you ended up where you are. These brilliant little reappropriated semi-thought experiments are the film’s highlights, and they usually involve the logic that governs dream architecture. Take Inception‘s totems. It makes a kind of visceral sense that we could find our way back to reality (or at least our own dreams) by consulting something as simple as an intimately familiar object. It’s imaginative, but intuitive. It also makes sense that in our dreams (which tend to mix the literal with the impressionistic, in equal parts) our secrets would manifest themselves in locked boxes, physical vaults in our interior lives revealed by our own frantic efforts to protect them, sentries and all. 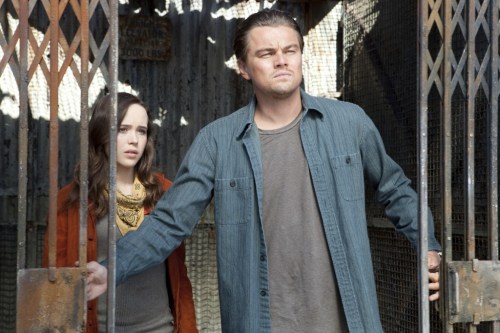 In a mostly male cast dotted with the occasional dream-haunting madwoman, Ellen Page provided a refreshingly asexual female presence in what (on the surface) is a summer action film. Well, asexual to most moviegoers and to her co-stars, but not to those of us in the audience who know what it means when a woman wears a bandana. (Let’s just say, it bodes well.)

Weirdly, I found sidekick dreamjackers Joseph Gordon-Levitt and Tom Hardy to be much more fun on screen than DiCaprio, Page or even Cillian Murphy. While I love the latter three in pretty much everything, I think each of their performances was more of a vessel for Inception‘s general cleverness. Most of the characters stayed out of the plot’s way, for better or worse. DiCaprio seemed watered down, Murphy looked sedated (along with his character) and Page didn’t really add much or take much away, either.

Unfortunately, Page’s character, Ariadne, got saddled with the kind of lines that narrate a story unnecessarily; after she witnesses some seriously unsettling stuff in Cobb’s head, Ariadne verbally reiterates all of the really obvious stuff the whole intra-Cobb part just showed us, like that he’s got some mega-volatile shit going on and it’s gonna get in the way of his job. Huh. We didn’t need to be handheld to that conclusion, but it’s a summer movie after all, I suppose.

“Nolan could’ve cut down on the snowmobiles and given us a few more scenes on how dream architecture works or just extended the zero-gravity fight sequence in the hotel, which was amazing.”

In that vein, toward the last quarter of the film, our dream-team enters some kind of arctic military stronghold that just seemed like a good excuse for Nolan to flex his blockbuster budget. These scenes felt weird and unnatural in what was otherwise a psychological thriller and not a round of Modern Warfare 2. It’s just hard to take violence seriously when everyone is dressed like a snow bunny for no apparent reason. A lot of time was wasted on mindless, uncreative action sequences that could’ve been devoted to any number of other impossibly interesting things going on in Inception. Nolan could’ve cut down on the snowmobiles and given us a few more scenes on how dream architecture works or just extended the zero-gravity fight sequence in the hotel, which was amazing.

Adrenaline aside, Inception engaged on a mainly intellectually level, but that isn’t to say that film didn’t pack an emotional impact. If you can get your mind to stop wrestling with the infinite regress of the dream states, the story between Mal and Cobb explored a few pretty hard-hitting questions. Could you resist the allure of living forever with someone you’ve lost? What could you give up? Is it possible to choose willful ignorance on such a large scale — could you reject reality entirely? 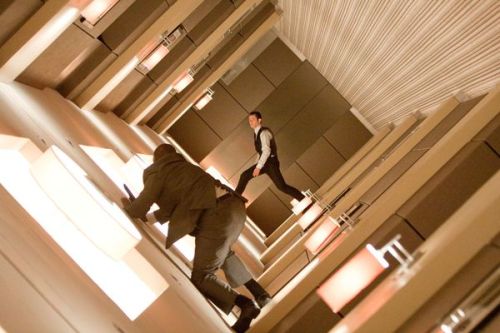 Ultimately, Inception was a taut, wickedly smart puzzle that will haunt you at least a little ways out of the theater. Perhaps it’s not as taut as the ferry scene from The Dark Knight, not as wickedly smart as Memento, nor as haunting as The Prestige. But when you don’t measure the director up against himself, there are very few other filmmakers who’ll make you think like this. Nolan twists our imaginations into a kind of sci-fi tangle, but he keeps us grounded in incredibly vivid realities, usually small, smart things, like the totem idea. If you like your movies to play out like an over-caffeinated philosophy class, then you’ll be happy to take Inception home with you to tug at all of its little conceptual knots. I know I am.