It’s not hard to observe that your grandma may have a different view about gay marriage than, say, the freshman class of your local liberal arts college. But now there’s evidence that opinions on public policy measures concerning gay and lesbian rights exhibit a huge generation gap, thanks to a new report released by the Public Religion Research Institute.

The report found that among the general population, 47% of respondents support legalizing gay marriage and 47% oppose it. These results echo several other recent studies, by Gallup, ABC News, and CNN, that placed support at between 51% and 53% and non-support at between 45% and 47%. In a statement, PRRI’s Dr. Robert Jones said, “This is the first year that support for allowing gay and lesbian couples to marry is not a minority position. Overall trends and the strongly supportive attitudes of the millennial generation suggest that we will look back on 2011 as the year marking a sea change in American attitudes on gay and lesbian issues.”

The poll found a self-reported increase of support for same-sex marriage: among respondents who say their views have changed in the past five years, 19% have become more supportive. And nearly two-thirds (64%) of respondents agree same-sex relationships should be accepted by society (though by the difference between that number and the level of support for gay marriage, clearly thinking something should be accepted and accepting it yourself are two different things).

The most interesting findings focus on what I am going to refer to as the Opinion Generation Gap of Doom, and religion.

1. The Opinion Generation Gap of Doom

According to the report:

The report found that there is a 20-point or greater gap between the opinions of millennials (ages 18 to 29) and seniors (65 and older) on every public policy issue concerning gay and lesbian rights the PRRI looked at. According to the report, the Opinion Generation Gap of Doom is still true where conservative political and religious groups are concerned — across the board, millennials are more pro-rights than seniors and often their respective groups overall. For instance, 49% of millennial Republicans and 41% of millennial white evangelicals support same-sex marriage, compared with 31% of all Republicans and 19% of all evangelicals. It’s worth noting that the study’s sample size for young Republicans and white evangelicals was very small, but guys, nearing half of that sample in both instances was supportive: how amazing is that?

Interestingly, the generation gap is also peer(-pressure) supported: 64% of millennials say supporting gay marriage is more socially acceptable, while 56% of seniors say opposing it is more socially acceptable. Incidentally, 62% of millennials support same-sex marriage, while only 31% of seniors do. Basically, the world needs more awesome accepting grandmas to pressure everyone else into sending love when the grandkids come out. 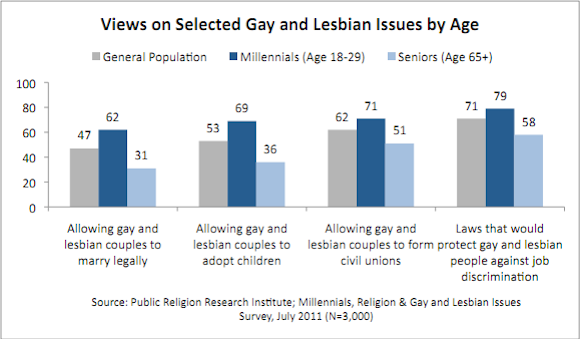 Via the Public Religion Research Institute

Surprisingly, the poll found that several major religious groups fall on each side of the gay marriage debate (and not just on the sides of “sort of against” and “damnation and hellfire”). Non-Christian religiously affiliated Americans support allowing gay marriage at 67%. Catholics (52%) and white mainline Protestants (51%) also favour it. Less surprisingly, 60% of African American Protestants and 76% of white evangelicals oppose it. 46% of Catholics also think that the church’s stance on gay marriage and other issues is too conservative, and 69% think that it’s alienating young people as a result.

According to the Atlantic,

“The explanations for these cleavages can likely be found in nonreligious factors. Catholics in the U.S., for example, are more likely to live in urbanized states than evangelicals, predisposing them to adopting more socially liberal ideologies. The support gap between black and white mainline Protestants might be attributed in part to differing cultural pressures within those racial communities. What’s nevertheless strange is that these Christian groups, with a few exceptions, mostly take a hardline stance against gay marriage, yet followers adhere to those stances at vastly different rates.“

A majority of every religious group surveyed also believed that negative messages from religious institutions contribute (either “a lot” or “a little”) to higher suicide rates among gay youth. Maybe they should work on that. 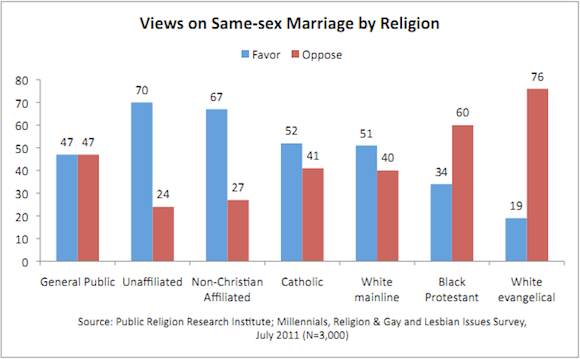 Via the Public Religion Research Institute

In the long term, this is good news; it’s seeing the change you want to see in the world. In a relatively short time in terms of a nation’s history, those people we now refer to as “millenials” will be the ones making public policy, and raising families that will largely share their beliefs about social norms and human rights. As times change, religious organizations and churches will (slowly) change as well; faith isn’t static, and neither are faith communities. Acceptance is going to happen one way or another, no matter what. The question now is: what can we do to bring us closer to the future?