Welcome back to Read a Fucking Book Club, a book club where we read together, apart! We’ve just finished reading Parable of the Sower by Octavia Butler, a haunting novel about a climate-damaged America just four years in the future from now and Lauren Olamina, the teenage protagonist who gives rise to a new spiritual movement. Be aware, while this post tries not to contain spoilers, this is the post discussing the book. If you’re looking for something to read before digging into your own copy, check out this intro post!!

Megan, Jehan, and I all had so many thoughts (shared in more detail below), but we were all struck with just how in touch with reality this novel was. In the Montessori-based Sunday School class I sometimes teach, we talk about prophets as people who take what they know to be true and share it with the world. This work, Butler, and Olamina are all prophetic. The core of the book is sharing truth and embracing change. These are two vital things that will help to guide us always, but especially now, when the globe seems closer to Butler’s science fiction reality.

This book consumed my life for a moment in ways I didn’t expect. I did end up needing to take a few breaks, however, because there are points in this story that leave a pit in your stomach deep enough to lose yourself in a little if you don’t watch your step.

One of the most eerie moments I experienced happened right off the bat, in the opening quote of the first chapter. As a practicing absurdist, one of the core underlying principles of my personal philosophy is that change is one of the only real constants we experience in our lifetimes. I found myself wondering as I got farther and farther into the book if the primary reason for the differences between my stance on the mechanics of change and hers is that the power differential between change and any given person in Lauren Olamina’s world is so much greater than it is in our present timeline. I began to wonder if, in a bleaker moment in time, believing that you could harness chaos would be the only way someone with such a belief could persist to see a brighter day.

I read long into the night on the evening I’d only planned to start the book, because I saw in its protagonist a roughshod determination that was deeply human in its flaws and a world that was strangely similar to our own. In the morning I ordered the sequel- somehow, for all that Parable of the Sower is a heavy read in trying times, it managed to leave me wanting more.

In hindsight, I was overly optimistic about my ability to read anything approaching leisure at this current time. This crisis has had an incredibly disruptive effect that’s rippling through my day job and my family in a way that makes it hard to keep both feet on the ground. Thank goddess for Audible though! While I haven’t finished just yet, the audio book is narrated by the one and only Lynne Thigpen — whose voice is buttery smooth and soothing.

But even with that silky voice in my ear I was ready to give up on this book within the first 20 minutes of listening because SHIT. IS. REAL. The book opens a mere four years from now in a reality that feels eerily tangible if the world continues on this downward spiral. But I was reminded that a friend of mine has some of Parable of the Sower’s opening words tattooed on her arm: “All that you touch, you change. All that you change changes you. The only lasting truth is change. God is change.” That reminder and the power of Butler’s words spurned me on and now I am hooked. Butler is a masterful storyteller, and her ability to create a world as real as its inhabitants is her truest gift. Laura, as the protagonist and the narrator through her journals, is the friend I need in these times; the friend whose uncertainty and inherent belief in both her power and her vulnerability speaks to the dualities within each person and the ways in which we can channel the vulnerability into another source of empowerment.

While I haven’t finished just yet, I’m obsessively listening to the audiobook day and night, both terrified by a world that seems more prediction than fiction, and emboldened by a sense that we can still persevere no matter what shape our world takes.

Octavia Butler’s Parable of the Sower reminded me just how poverty, sickness, abandonment, abuse, seem to slowly and then all of a sudden ruin one’s life. How, when you’re marginalized, you find a way to make it work until one day, you cannot because your house gets burned down, your brother is killed, your father disappears, or your neighborhood is damaged beyond repair. While most of us don’t live quite in that reality just yet, we’re so close to it. That’s what I kept finding myself thinking while reading: this could be us next month, next year, ten years from now. This could be us in my lifetime.

And just like Lauren knew she had to leave, but also knew that was the scariest possibility, I feel similarly. Change, as Earthseed teaches us, is God, is inevitable, is everything. But change is also so damn difficult to embrace. I found myself so angry with Joanne for telling her parents all of Lauren’s ideas when she trusted her so much and her willingness to just move to Olivar, but at the same time… I felt a strong conviction about her character! I get wanting comfort and security and knowing what’s going to come next. I get sacrificing what only feels like a little freedom for convenience. And I also ultimately get why that isn’t the way that will save us. 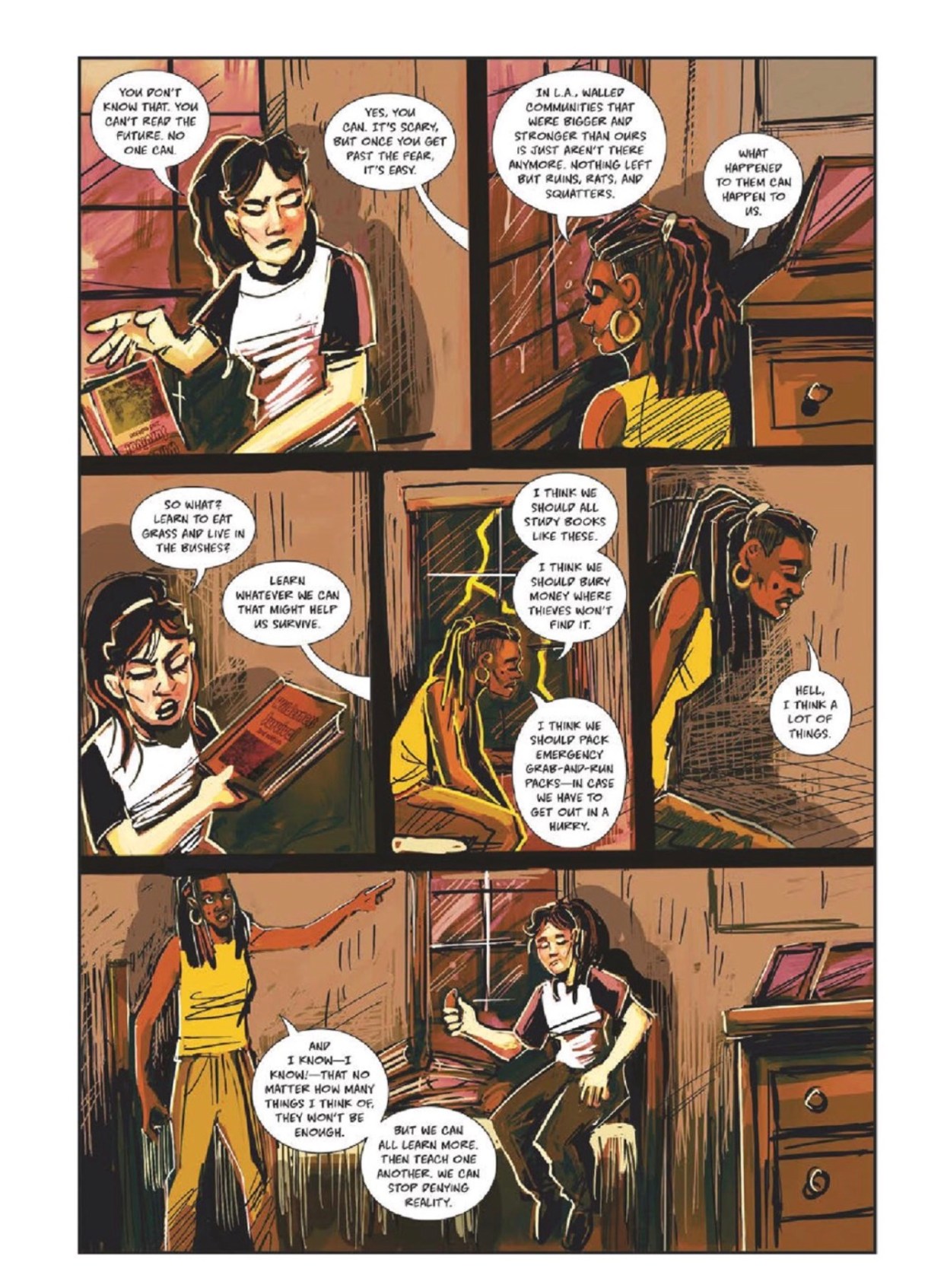 What saves Lauren? Trusting people she wouldn’t have originally trusted. Listening. Writing down the truth when she observes it, sharing those truths with others. Understanding that with a belief system often comes the willingness to fight to protect that system. She gains community throughout the book through knowing the truth and relying on that. I do not fully know what is true for me yet, but she, and this book, have guided me towards uncovering and living my own truths.

Now this is a book club, gays and girls, and we want to hear from you! Here are some discussion questions to get your thoughtful brain thinking, if you need them, but we want to know any and all of your thoughts, even if they aren’t directly question-related!