Welcome to the tenth installment of Queer Your Tech with Fun, Autostraddle’s nerdy new tech column. Not everything I cover will be queer per se, but it will be about customizing this awesome technology you’ve got. Having it our way, expressing our appy selves just like we do with our identities. Here we can talk about anything from app recommendations to choosing a wireless printer to web sites you have to favorite to any other fun shit we can do with technology.

I thought we could take a little break from backing up to talk about Alan Turing.

Lately I’ve been hearing a lot a lot a lot about Alan Turing, who would have been 100 years old this year. As many of you pointed out, my pseudonym is Lana Turing in tribute. Because without Turing, none of us computer nerds would be as advanced as we are today. Alan Turing’s was already a brilliant mind when he was invited to Bletchley Park during World War II. Bletchley Park was an estate maintained for code breaking and was top secret. In fact, people were let go from their military or government jobs for being unable to give reasons for actions that came as direct orders from Bletchley Park. Not even other military and government agencies could know what was going on there. 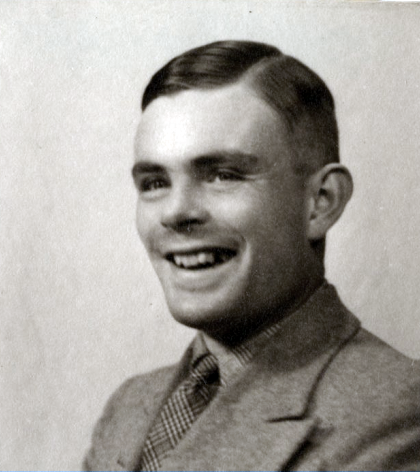 Turing led the team that cracked Enigma, a Nazi machine that typed normal messages in code and then deciphered them on the other end, a machine that was thought to be unbreakable. Due to his work, the war ended quicker. He was never given full recognition as a war hero and despite his hard work he was convicted of homosexuality, then a crime, in 1952. Given the choice between prison and chemical castration, he chose the latter, which made him extremely unhappy in his body. He committed suicide via cyanide-laced apple in 1954. In May of this year, a bill was put before the House of Lords which, if passed, would retroactively pardon him. On December 18th, a group of scientists asked Parliament to posthumously pardon Alan Turing. And thus the multitude of Turing-related articles and podcasts I’ve been seeing lately, both for his hundredth birthday and for the argument surrounding his potential posthumous pardon. Here is a roundup of some of those things.

Alan Turing: Codebreaker, from Stuff You Missed In History Class in 2011, republished this year in conjunction with their code breaking two-parter.

Codes! Axis Cryptography in World War II, from Stuff You Missed in History Class, part one of the code breaking two-parter.

I, Science: Alan Turing’s Centenary. This talks about the Turing test (a way to judge if a machine is “human”) and the podcaster’s conversation with Cleverbot.

Nature’s Podcast Extra: Alan Turing. I like this one because they talk to Alan Turing’s biographer, Andrew Hodges. He wrote Alan Turing: The Enigma.

Next week: Backing Up Your iOS Device.