One year ago I woke up to a Slack alert from Executive Editor Laneia telling us a mass shooting happened at a gay nightclub in Orlando and we needed to cover it ASAP. I was the weekend editor — duties include publishing our regular weekend content and covering queer breaking news — so I sprang into action and started gathering information. When I read initial reports that said 50 people had died, a number which I know now includes the shooter, I was of course shocked and in disbelief that something so horrible happened at a gay nightclub to my fellow queers during Pride month. But I wasn’t prepared for the magnitude of finding out the shooting took place on Latin night and the vast majority of the victims were Latinx and Black folks. Those were my people, mi gente. My heart broke.

I went on autopilot; I wrote the news and hit publish. My partner and I had plans that day to clean our apartment and do laundry but instead all we did was mourn. We held each other and cried because we knew it could’ve been us. We met up with our queer friend group at the local lesbian bar Sue Ellen’s before going to a vigil and march later that evening. It was comforting to be with my queer family and the community in the wake of such a horrific event. 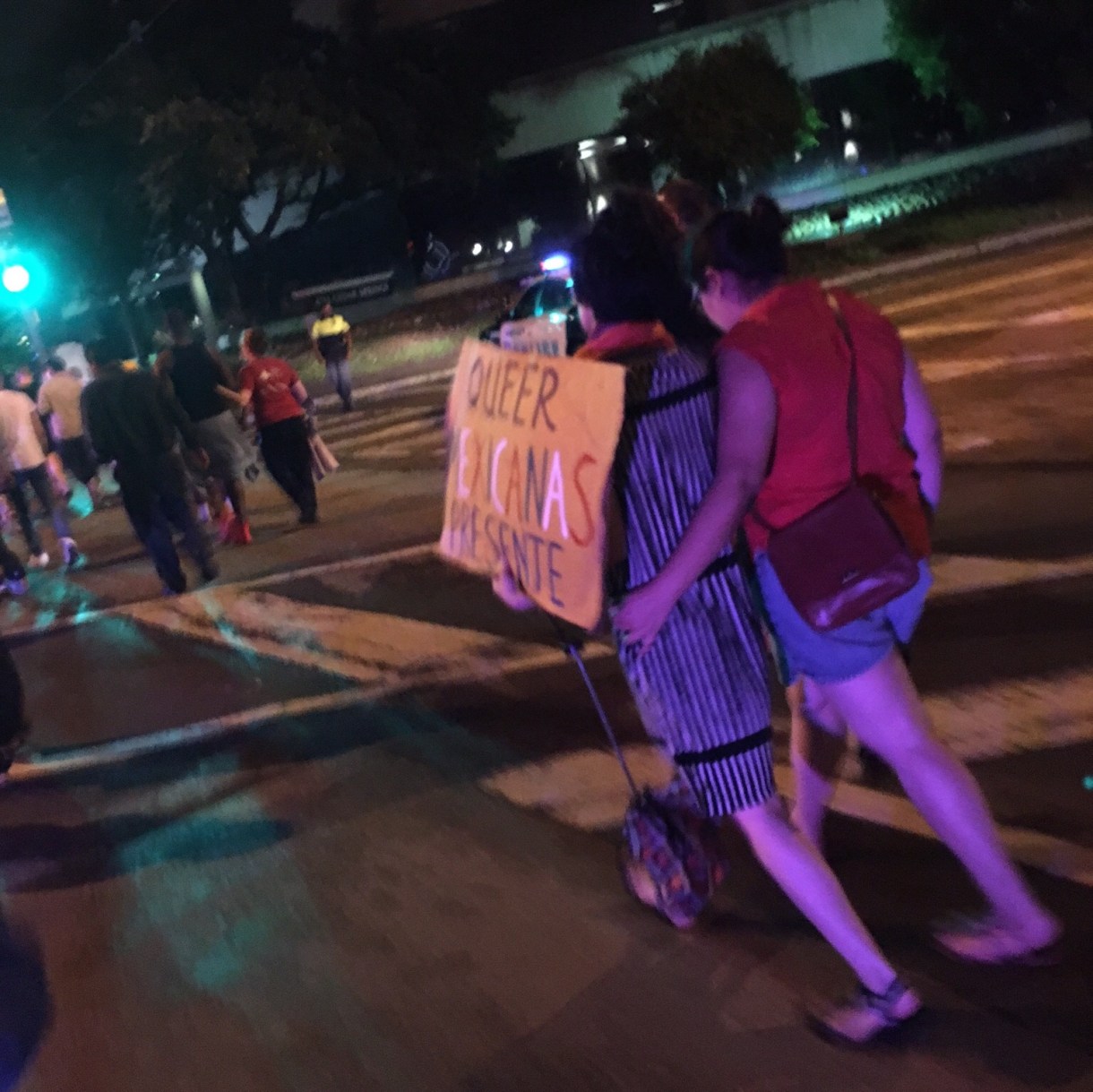 My partner and I one year ago. “Queer Mexicanas Presente”

Across the nation and around the world, LGBTQ communities gathered together to mourn and remember the 49 lives that were taken at Pulse nightclub. In Orlando, the city mobilized to do what they could to help. People donated blood, money, and services to the families of the victims and the survivors. Since that fatal night, Orlando seemed to band together to assist those affected by the tragedy. Hashtags and slogans emerged from this outpouring of support: Orlando United, Orlando Strong, We Stand with Orlando, Love is Love, Love Not Hate.

People flocked to memorial sites around Orlando, including the Pulse site, and decked it with rainbows, Puerto Rican flags, and these popular slogans. In the face of intense violence and death, the positive messages of unity, love and kindness were appropriate and necessary to some. As time passed on, did those messages still hold true to the victims, injured survivors, and their loved ones — nearly all who are queer and/or people of color? Twenty-three out of the 49 people who died at Pulse were from Puerto Rico. Were they included in this united front? 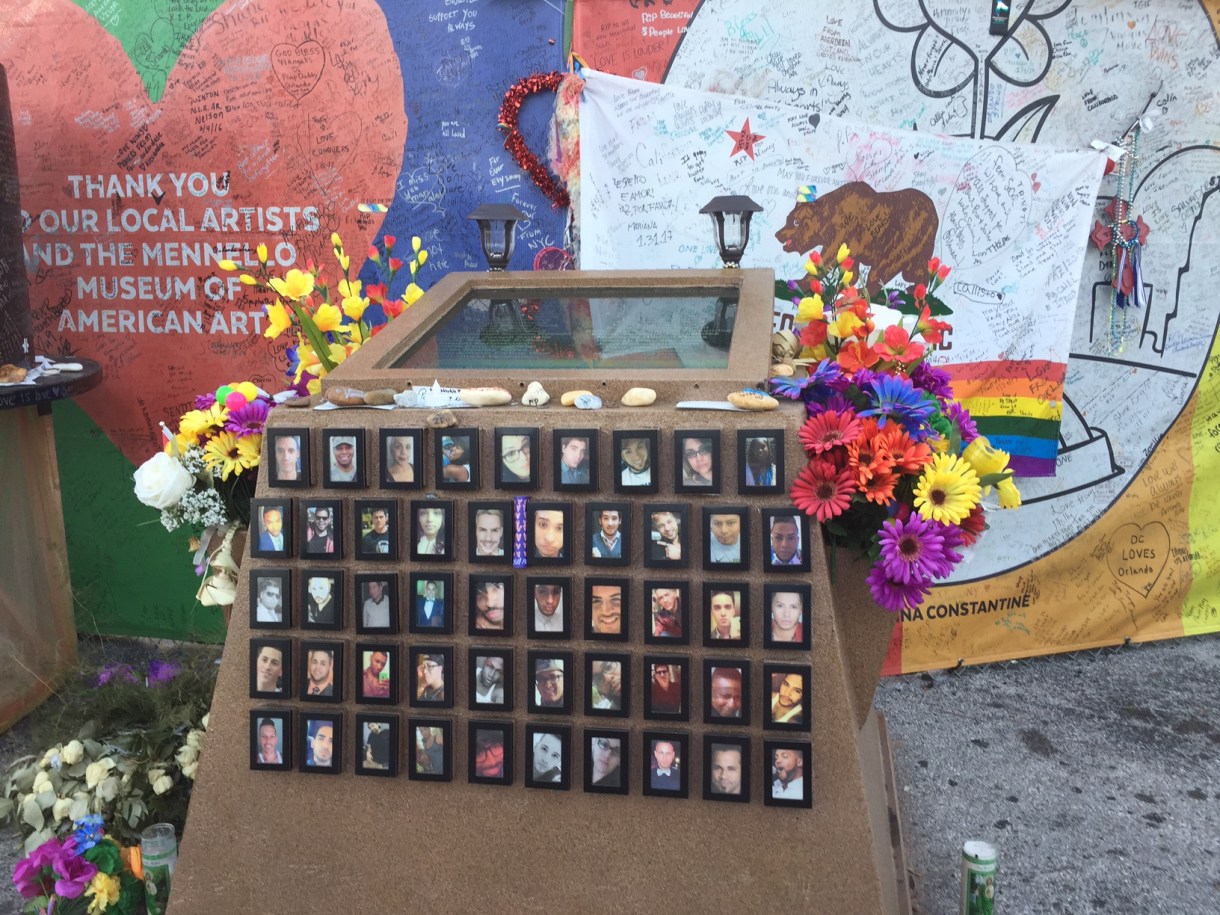 In the aftermath of the tragedy, Orlando struggled to adequately provide help to those at the intersections of these identities. There was a serious language barrier when it came to helping Spanish-speaking families looking for information and their loved ones at the hospital, hosting public vigils and memorials in Spanish, offering grief counseling, and when it came down to telling their stories and narratives to the media. Undocumented survivors of the Pulse shooting feared speaking to the FBI during the investigation because they thought they would be deported. They also faced paying for their hospital bills while unable to work and with no government assistance.

Families of the victims from Puerto Rico felt isolated from the healing process and grieved alone. With such a traumatic event directly impacting the Latinx community, securing long-term mental health services has been a daunting task. According to the Orlando Sentinel, Florida ranks almost last in the nation for mental health funding. On top of this factor, one-third of Latinxs lack health insurance in the nation and Florida is home to the the third-largest proportion of Latinxs who are uninsured at 36 percent. Without a secure infrastructure in place, Orlando’s Latinx community has had to rely on nonprofits and donations for long-term counseling, which isn’t sustainable.

Today marks one year since the Pulse shooting. Orlando is remembering the 49 lives by honoring today as Orlando United Day, a day dedicated to “acts of love and kindness.” Spearheaded by One Orlando Alliance, a coalition of LGBTQ organizations, people are encouraged to do something nice for someone else, donate, and volunteer in their community.

The day maybe well-intentioned and good spirited but I can’t help but wonder — who is this day for? Whose healing is prioritized on this day? It feels disingenuous to put on such a saccharine facade that promotes “love and kindness” when it doesn’t alleviate the painful aftermath or acknowledge the gravity of the consequences that impacted Latinx and Black LGBTQ people, especially of Puerto Rican descent. It doesn’t hold the true weight of the horrors, sadness and challenges of the survivors or the loved ones of those who died. We should acknowledge that one year after Pulse, people of color affected by the tragedy are still struggling. The Miami Herald reports:

Pulse was a home, a place where a diverse spectrum of people could feel comfortable. The black community feels it has been sidelined in the narrative of the attack and its fallout. Unmarried LGBTQ couples with families have trouble accessing benefits in a system that wasn’t built for their partnerships.

And overall, the powers-that-be were ill-equipped to handle tragedy in the LGBTQ community of color. Some victims were outed because of Pulse. There were undocumented survivors who were scared to come forward afterward if it meant an FBI interview. Money set aside for victims got caught up in court arguments between biological and chosen families.

This tragedy devastated LGBTQ Latinx and Black folks; they should be the ones centered on this day and should be the ones supported and prioritized in the healing process. There are several people and organizations in Orlando making strides in doing just that.

Proyecto Somos Orlando was created specifically with the Latinx community in mind. They offer a range of services including transportation services, grief counseling with bilingual professionals offered to undocumented family members of the victims, immigration counseling and legal assistance. QLatinx is a grassroots racial, social, and gender justice organization dedicated to the advancement and empowerment of Orlando’s LGBTQ+ Latinx community. The group meets every week to talk about issues their community faces. Sometimes it’s the only place members feel safe and seen sharing their experiences.

Contigo Fund, an initiative of Our Fund Foundation, works to fund and empower existing organizations that directly affect LGBTQ and Latinx individuals, immigrants and people of color in Central Florida. These are just a few of the organizations in Orlando who are prioritizing LGBTQ and Latinx folks in their work. Orlando and the rest of the nation should follow their lead in supporting the most vulnerable who were affected by the tragedy for the long haul. It seems more impactful to uplift the work they have already started to directly help the communities they serve. 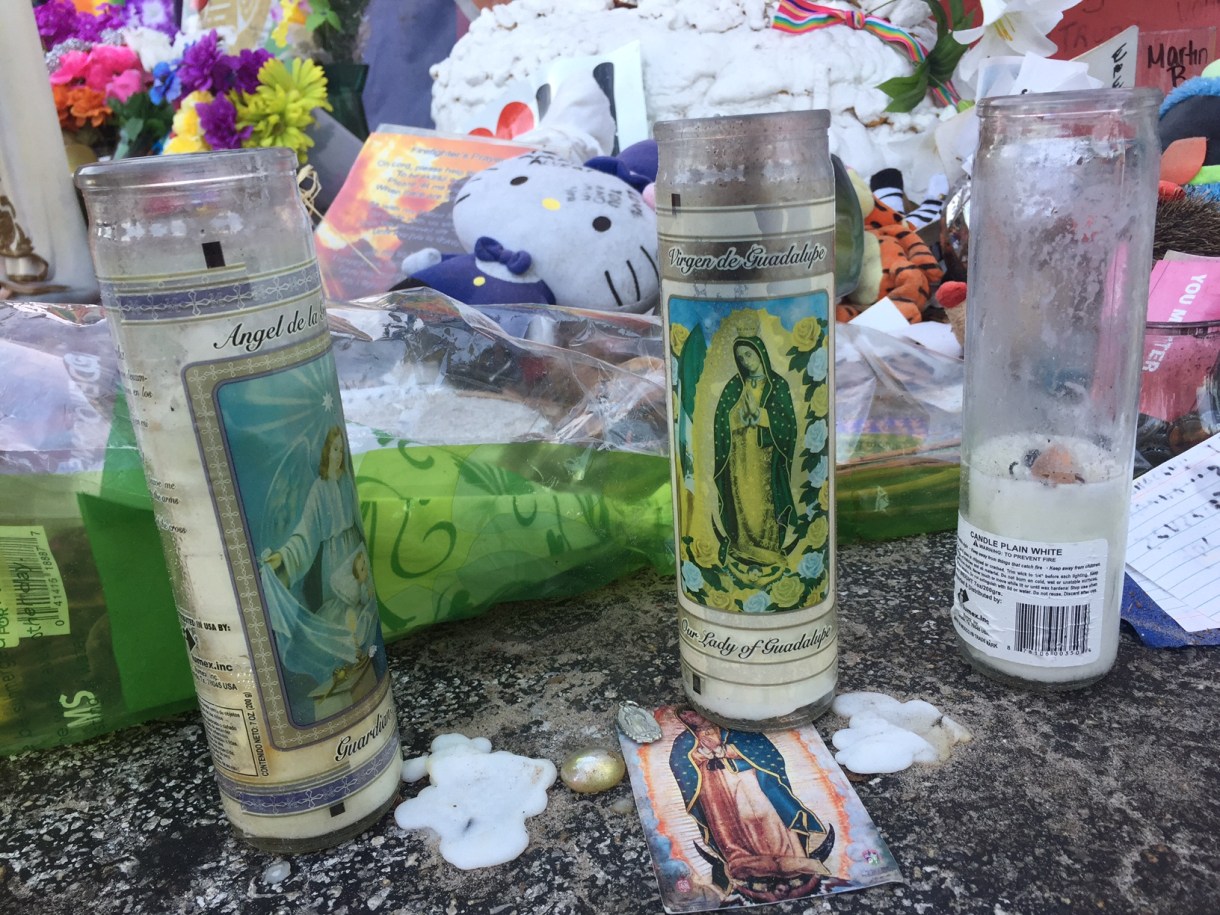 In March, I attended an LGBT journalism conference in Orlando hosted by NLGJA, the association of LGBTQ journalists. The conference was intentionally held in Orlando to honor and remember the 49 lives lost at Pulse and to hear from the journalists on the ground who reported on that night. You could’ve heard a pin drop when the journalists were recounting the immediate coverage of the horrific event. In a room full of LGBTQ journalists who all wrote about the Pulse shooting in one way or another, we were all taken back to that day and most of us shed some tears while we listened.

I immediately got emotional when we heard from Ricardo Negron-Almodovar, director of Proyecto Somos Orlando and a survivor of the shooting. He spoke of how his community dealt with the aftermath and explained the media’s pitfalls in covering the Pulse tragedy — like how there weren’t nearly enough journalists who spoke Spanish to communicate with those affected, which then went on to erase their narratives, or how journalists weren’t mindful of the survivors’ grief and processing. As one of the very few Latinx attendees at the conference, I was incredibly grateful a fellow Latinx journalist was sitting right next to me, Miriam Zoila Pérez who writes for Colorlines. During our break, we talked and processed what we listened to and then hugged. Even if we weren’t there as first-account witnesses or journalists on the ground covering it, we too were impacted by this tragedy. In a room filled with lots of white queer people, we couldn’t mourn with them — we needed each other, to see each other and recognize the similar hurt we hold. 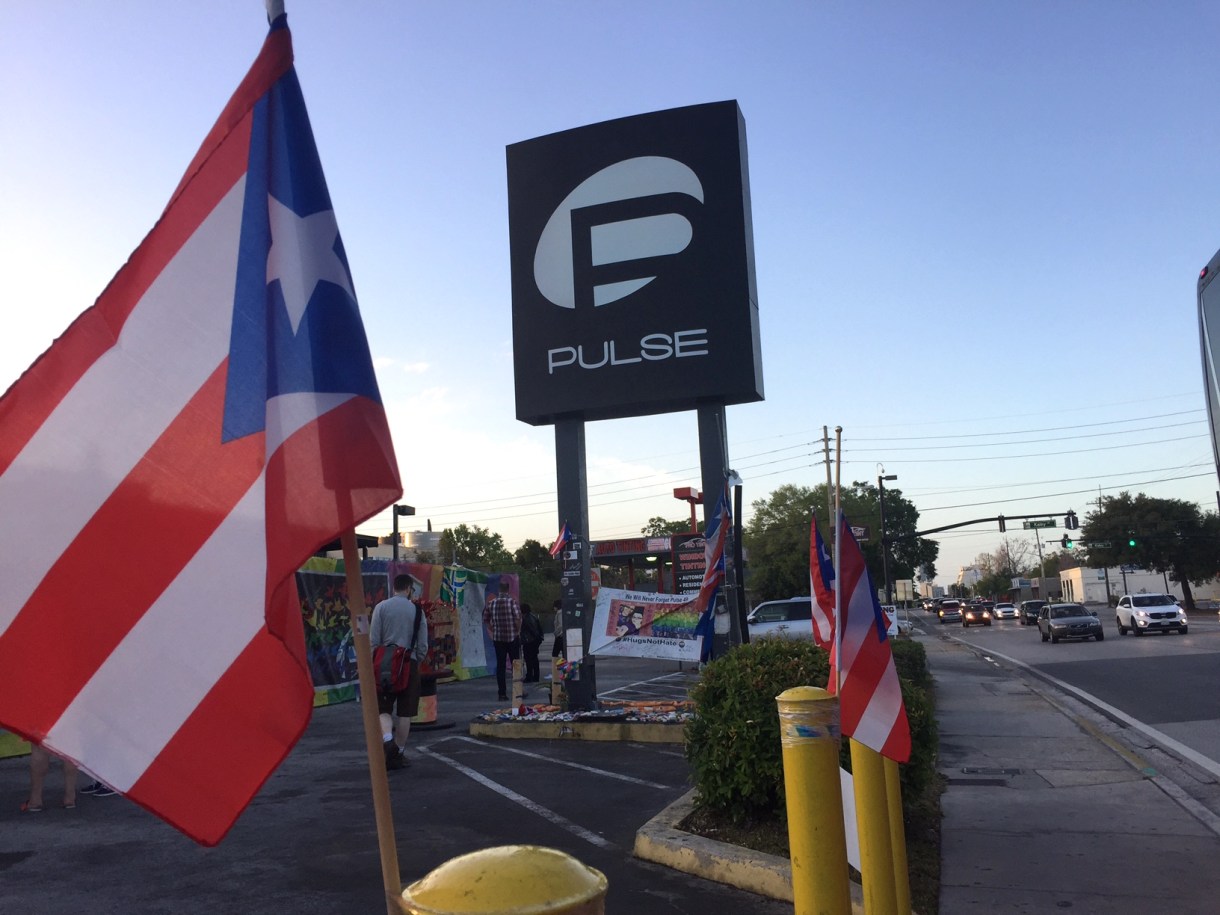 Later on in the day, the conference took us to the Pulse site. I mentally prepared myself in the quiet of my hotel room before the bus left. Once we pulled up to the Pulse site, I felt numb. We got off the bus to pay our respects at the makeshift memorial. There’s rainbows galore, Virgen de Guadalupe candles, drawings, messages, flowers, Puerto Rican flags. I thought I was going to be moved or cry when I saw the site, but I didn’t. Instead I had a lot of complicated feelings about the memorial. I couldn’t help but feel like the memorial was whitewashed and didn’t represent the Latinx communities affected.

Even though the messages written around the tarps enclosing the nightclub were very positive and supportive of the LGBTQ community, it lacked the same enthusiastic messages for immigrants and for people of color. The Pride flags and rainbows are easily recognizable and gives a nod to the LGBTQ community and validates their existence. It gave permission to certain groups, like queer white people, to mourn and grieve while it couldn’t do quite the same for Latinx communities. The Spanish messages I saw resonated the most with me, like this one: “Que en paz descanzen todos, desde P.R.” I looked at the Pulse building and thought of the people who came here to find joy and dance. 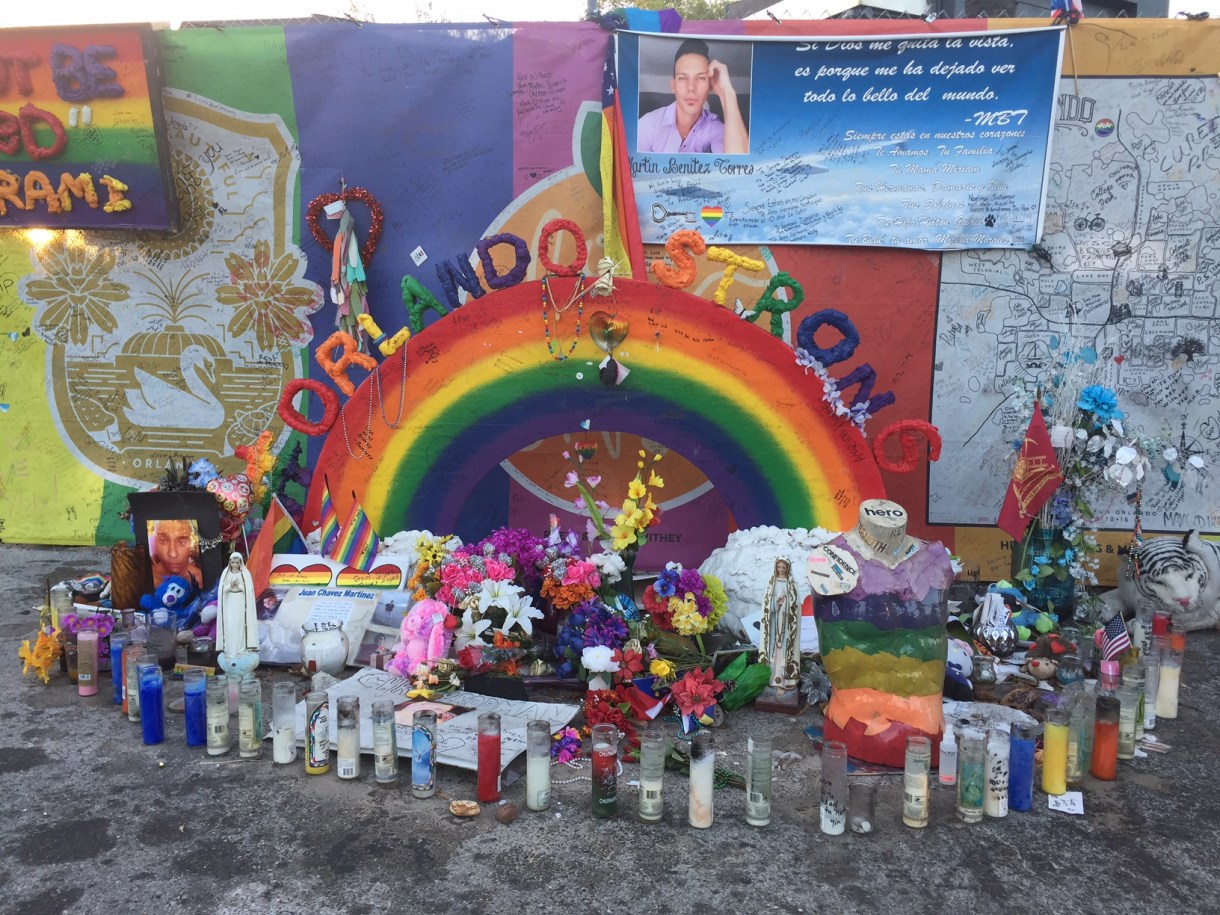 It’s important to honor and remember the 49 people who died one year ago today. We should remember their spirit and be moved to better support their communities in their honor without erasing all of their identities. We must acknowledge the Pulse shooting was the worst mass shooting in the U.S. and targeted queer black and brown folks. We should hold those who survived the tragedy and the victims’ families close to our hearts and aid them in the healing process. It’s only been one year and it’s just the beginning.