If you’ve been paying attention to the continued unfolding of the crisis facing immigrant children entering the U.S., it’s likely you’ve heard that a bus of detained immigrants being transported by U.S. Border Patrol was stopped by a group of protesters outside of Murrieta, California. The protesters yelled chants at the bus, including, “Go Back Home,” and “U-S-A,” and they held extremely racist signs.

The buses bound for Murrieta were primarily transporting children accompanied by family members. In Murrieta, they were to be processed by Immigration and Customs Enforcement (ICE) before being released around the country to places where they had family. It is not typical for Murrieta’s facilities to be used for these purposes, but because Border Patrol and ICE have detained more people than it can handle close to where they are apprehended, they have been transporting people to more remote or less-frequented places like Murrieta. Before the buses arrived, the Murrieta officials posted on the town website, implying the arriving detained immigrants would pose health and safety threats to the town. The blog said, “the immigrants will have already been screened for health issues… Murrieta will remain a safe community regardless of the pending arrival of these illegal immigrants.” The “I-word” was used incessently, even being used in the title of a piece (since removed) called, “Murrieta Opposes Illegal Immigrant Arrival.” Referring to immigrants as “illegal” is an offensive and othering technique used to bolster anti-immigrant campaigns and hate. 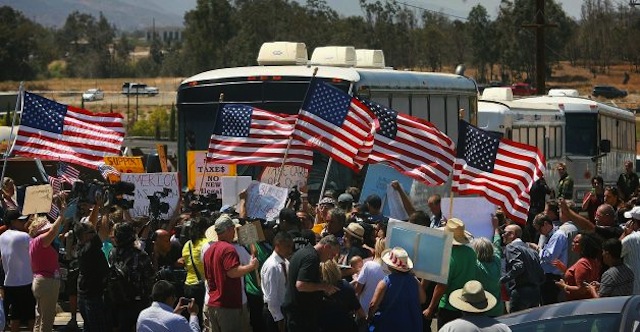 While the example of Murrieta is extreme and unusual, the racist attitudes expressed are hardly surprising. Copy-cat protests have since sprouted up in Oracle, Arizona, and a proposed shelter site in Westminster, Maryland was vandalized with the message “No illeagles here.” And while it’s also not particularly surprising to see government officials fostering anti-immigrant sentiment (Did you hear the one about Texas governor Rick Perry going out to “patrol” the border with Sean Hannity and a machine gun? It happened), it’s not like it only occurred to Murrieta residents to be racist and xenophobic while browsing through their town’s blog. Encouragement of racism like what went down in Murrieta (and Oracle and Westminster) has long been tied to the expansion of border policies.

Racist ideas about immigrant groups have always been harnessed to justify exclusionary immigration policy and the construction of physical borders. While we can trace this all the way back to the Chinese Exclusion Act and the invention of the passport in the 19th century, we can see it just as vividly in the fact that kids and families risking their lives to cross the U.S./Mexico border by the thousands have been characterized as invaders. Instead of meeting these kids and families with empathy and outrage over the fact that they need to leave their homes (which also has to do with U.S. policy, incidentally), they are met with rage and incarceration. Now, deportation proceedings for these kids are going forward despite the fact that the U.S. is being encouraged to handle this as a refugee crisis. These deportation proceedings come about via institutionalized racist elements like the fact that people in immigration court are not entitled to legal representation, so kids are being forced to represent themselves in courts that don’t even speak their native languages. But they also come about via more explicitly racist attitudes that permit and encourage the exclusion and neglect of people who are migrating.

Because Murrieta is not the only place where locals are taking anti-immigration sentiment in their own hands. Todd Miller, author of Border Patrol Nation said,

“Murrieta is one little dot in the landscape that we’re seeing on the border right now, especially for the last couple of weeks. You have this anti-immigrant backlash you’re seeing — different ‘Murrieta’ reactions across the border landscape. It seems to me like the Obama administration’s first response — this idea of ‘speeding up’ the deportation process — is a response to this incessant, racist banter you’re getting.” 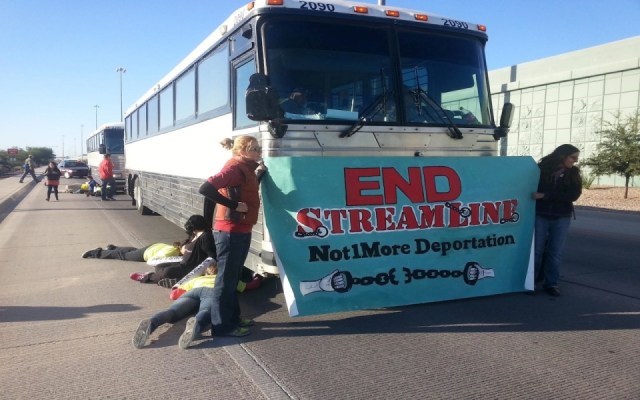 The racism of the immigration system is also apparent when you consider that the people of Murrieta are not the only people to have blocked buses of immigrants being transported by Border Patrol in the past year. Last fall, when protestors chained themselves to buses in an attempt to stop deportations, they were arrested and faced criminal charges. Basically, the protesters in Murrieta received no consequences from law enforcement. Miller noted, “to me this speaks to the broader question of, what sorts of actions are not criminalized? Even though these were basically the same action — a bus being blocked — our law enforcement treated them totally differently.”

This discrepancy in how protestors that block immigration proceedings are treated sends a clear signal that racist attitudes are tolerated, and are being both implicitly and explicitly endorsed by government officials, agencies and law enforcement. Murrieta’s recent display of racism disrupted immigration enforcement, essentially because the people protesting didn’t think the people on the buses were being treated harshly enough. These sorts of racist outcries that dehumanize migrating people happen often, and are heavily entwined in the system of border and immigration policy and enforcement.