This morning, members of the Sylvia Rivera Law Project, including SRLP membership director Reina Gossett, took over the stage at the HxRefractored Conference in New York City to demand that the New York State Department of Health repeal the 1998 regulation barring transgender people from accessing healthcare through state Medicaid coverage. 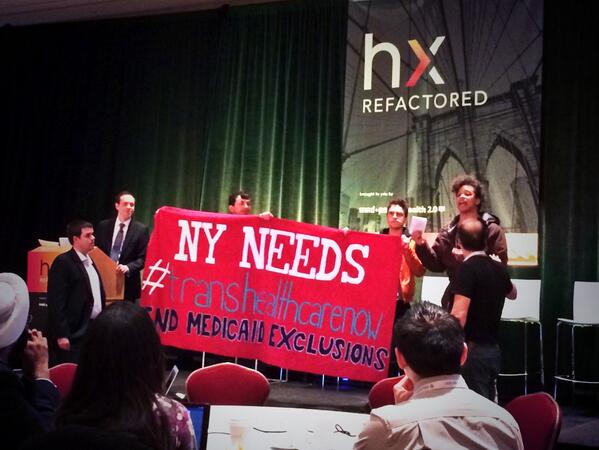 Banner drop at HxR Conference via via @ericachain

The action is part of an ongoing campaign to repeal the discriminatory regulation by the SRLP, GLAAD and the Audre Lorde Project’s TransJustice initiative. SRLP has been working on transgender Medicaid coverage since 2002, filing lawsuits and petitions with thousands of signatures. The Department of Health has consistently responded by taking no action whatsoever. 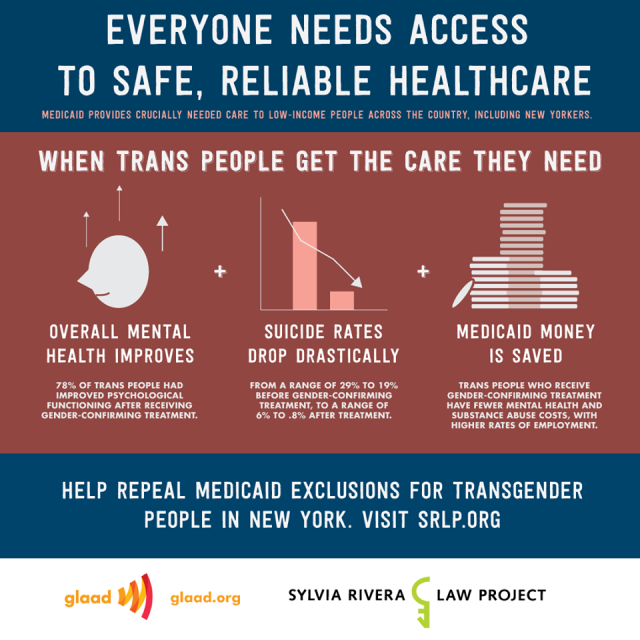 SRLP flyered with an infographic about transgender healthcare before the action, which, Gossett reported, conference goers were really interested in. Then, during a moment of “serendipitous technical difficulty,” Gossett and two members of SRLP took to the stage, intervening in New York State Health Commissioner Dr. Howard Zucker’s keynote address. As Gossett said, they intervened during Zucker’s speech because “…[the regulation’s] not a law… if [Zucker] decided tonight that he all of a sudden cared about healthcare for transgender people, he could change it. And so we knew that we wanted to take that message to this audience and to him and really confront him.”

“I talked about why this regulation is so harmful – it’s not just a policy issue, it’s about who can go to the doctor, who can access medically necessary care, and who can live. And right now the message that the Department of Health is sending to transgender New Yorkers is that they don’t care if we live, they don’t care about our health.” 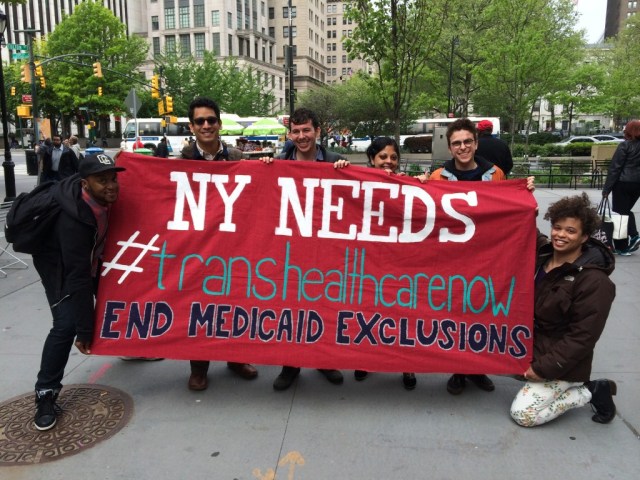 Zucker’s keynote focused on the government’s role in health care innovation and “using technology to promote more patient-centered care.” The audience responded with applause and cheers, pleasantly surprising Gossett, who pointed out that the action could have received negative response and resulted in her arrest. Conference-goers took Zucker’s message to heart, and used social media technology to promote access to patient-centered care for trans people, tweeting with the hashtag #TransHealthcareNOW. Even the HxR official Twitter account got involved in the conversation by retweeting people using the hashtag.

Gossett wrote on her website after the protest, “We went [to HxR] to stop business as usual at the Department of Health. 16 years of transgender exclusion from medically necessary healthcare is far too long!”

The fact that the regulation still exists in New York State is absurd. The reasoning that precipitated it — that healthcare for trans people was somehow “special” or “too expensive” — is discriminatory, inaccurate and dangerous, and counters the reports made to the DoH when the regulation was implemented that said preventing transgender people from accessing healthcare is detrimental. To add an additional layer of absurdity, the NY Department of Health website has a relatively comprehensive section about LGBT health, headed by the statement that “One of the goals of the New York State Department of Health is to eliminate disparities in health care access by increasing the availability and quality of health care services for New York’s underserved populations.” The page links to sites like Injustice at Every Turn, the Center of Excellence for Transgender Health and a specific page describing the obstacles trans people face in getting healthcare. This page notes,

“Transgender persons are often reluctant to seek medical care through a traditional provider-patient relationship. Some are even turned away by providers. A doctor who refuses to treat a trans person may be acting out of fear and transphobia, or may have a religious bias against LGBT patients. It’s also possible that the doctor simply doesn’t have the knowledge or experience he needs. Furthermore, health care related to transgender issues is usually not covered by insurance, so it is more expensive.”

Clearly, the Department of Health has the information it needs in order to have a pretty solid understanding that trans people face incredible obstacles when seeking healthcare, but this understanding is pretty hollow when their own regulations do the work of creating the barriers they describe. #TransHealthcareNOW reminds New Yorkers that trans people need real action from the state. Given the positive response of HxR conference attendees today, it seems clear that New Yorkers are starting to hear the message. The question that remains is when the Department of Health will wake up and smell the justice.

As of 4pm today, the Department of Health has not yet responded to or even commented on this morning’s action. For Gossett, “…I don’t know what a response is anymore other than a repeal of the regulation… That and an apology.”

To support #TransHealthcareNOW, donate to SRLP for GiveOUT! Day tomorrow, and sign their petition on Change.org.