Yesterday both sides of the Proposition 8 trial in California delivered their closing arguments to Judge Walker; you can read our very own Autostraddle recap, as well as other reactions to the day, which are not as good as our recap. The day ended with the American Foundation for Equal Rights press conference, reported on by Prop 8 Trial Tracker, which echoed the opening press conference in May 2009, which began the trial that has become so important to so many of us. (@sfgate)(@npr) (@prop8trialtracker) 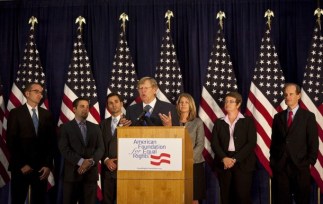 The defense’s closing attorney, Charles Cooper, refused to take questions; Andy Pugno, General Counsel of Protect Marriage stood by the defense’s claim that marriage needs to be reserved for a man and a woman because it avoids “irresponsible procreation,” and protects the state’s interest in their child. The defense maintains that marriage is primarily about procreation, and since “99% of kids are born from opposite sex couples,” it should remain their private institution.

Olson and Boies re-articulated their stance that this isn’t about what’s best for the state, but about fundamental human rights; “at its core this case is about every person being treated equally.” Both of their counsel on this case was outstanding, and they received wild applause at the podium. Olson reminded us again of how unfortunate it was that cameras weren’t allowed in the courtroom — “If there was every a trial in the history of our country that the American people should have seen it was this trial.” Hopefully there will be a musical of it soon, obviously starring Julie Goldman & Brandy Howard.

Olson affirmed that this case will almost definitely go to the Supreme Court; whichever way the judge rules, the losing side will certainly appeal, which makes this trial hugely important for all of America. And lastly, Olson told us again how passionate he is about our cause: “There may have been a few times when I had more emotion running through my body, but felt that way all day today and most of time in trial. I need to be able to convey those emotions to the judge.” Boies agreed, and offered his prediction that whatever happens, the 18,000 marriages already legal in California won’t be invalidated.

The judge has no deadline as far as when to submit a ruling; experts predict it will take “as long as it takes.” Until then, we’ll be on the edge of our seats, but also planning the next move – whatever Judge Walker says, this isn’t over. It’s going to the Supreme Court either way, and we need to work just as hard as ever to make sure this is an issue that matters to all Americans.

However, if we lose this, that shit is bananas! We KILLED that thing in court, the other side looked terrible, made terrible points, and ultimately made complete asses of themselves, which is basically all we’ve ever wanted, the only thing that could’ve made it better would’ve been if Cooper had his fly unzipped or mayonnaise on his lip during the final rounds.

Queerty predicts, in “Did Olson & Boies Just Secure the Death of Prop 8?”

… even if you’re a supporter of Prop 8, you’ve got to admit: the defense blew it. In Perry v. Schwarzenegger, it was Olson and Boies, on behalf of their gay couple defendants, who were required to prove their case: That Prop 8 is unconstitutional, was motivated by animus, and must be struck down. They did it. More than adequately. And they didn’t just make the legal argument (which we’re well aware is the most important), but the logical one — how legalizing same-sex marriage won’t keep straight couples from getting married or having kids, and how re-authorizing marriages for gay couples will make more families moreDefense of Marriage Act, similar in many ways to Prop 8, are discriminatory. And how legalizing same-sex marriage is — wait for it, wait for it — a good thing. stable. And without question, Cooper’s roster of “experts” completely annihilated ProtectMarriage.com’s core arguments. There’s just no way around it; their own witnesses admitted laws like the

So our man Walker (he’s gay too! Cool yeah?) will probs just be stopping by any minute now to fix this shit. In other news, that probs won’t be the end of it anyhow.

June 28, 1969: Turning Point in Gay Rights History: “The most thorough documentary exploration of the three days of unrest beginning June 28, 1969, when patrons of the Stonewall Inn, a seedy Mafia-operated gay bar in Greenwich Village, turned on the police after a routine raid, “Stonewall Uprising” methodically ticks off the forms of oppression visited on gays and lesbians in the days before the gay rights movement.” (@nytimes)

Rachel Maddow is like one step away from being Obama’s newest speechwriter, she’s a regular Toby Ziegler, like some advice for what Obama could’ve said in his speech about the oil spill:

Is your mom gay? Our editor-in-chief’s mom is gay. Also, like three of us have moms who were are 95% sure are gay. So it is no surprise to us that lesbians raise such lovely children. (@pridesource)