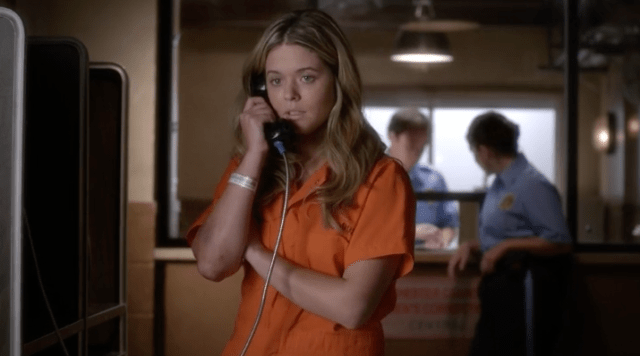 Mrs. Marin, do you have any do-rags leftover from when you were in the slammer-jammer? Toby wouldn’t let me borrow one of his.

I forgot that the DiLaurentises owned a real estate agency. Probably I forgot because they keep moving into and out of the one house where everyone in their family has been murdered at least once, and it seems like if you had access to dozens of other residences, you might be able to find a new place to live. Anyway, Jason is taking over the business now, and that is just fucking fine with Ashley Marin who has been sitting here guarding the files since Pepe dug up Jessica D. (I was just thinking of Dolce, Gabbana & Lebowitz law firm. Remember that? Hanna really has always been the best.) Jason asks Ashley to stay and she says fine but she needs to go home and shower first. He says he’ll go with her. She says fine to that too, speaking of 99 wine problems.

Wait, no. Before they go, Ali calls from prison and Jason hisses, “Tell her I’m in the shower!” And that’s what Ashley does. Aw, man. Seems like just yesterday Ashley and Ali were cowering together in the foyer while Noel Kahn did Psycho shadow puppets on the wall and clanked chains together and did ghost noises. Now they’re strangers. 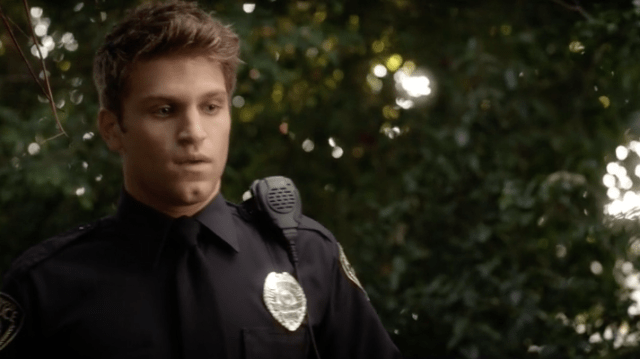 CSI: That One Backyard

Here’s a little secret. I had to watch this episode three times before I understood who the hell’s murder investigation was happening. When I first watched, I thought it was Bethany Young’s and then when I watched again I thought it was Mona’s, but then when I started recapping, I was like, “Wait, no. Mona was murdered at Christmas. It is, at the very least, after spring semester right now. Why are they only just now searching her yard for evidence?” But then I watched a third time, and I am pretty confident it is Mona’s murder. Anyway, whatever. Toby is in someone’s backyard in his police suit and he finds a bloody knife and he hides it under a leaf and draws a chalk outline around it and covers it in glitter and flashing lights, like Spencer taught him. 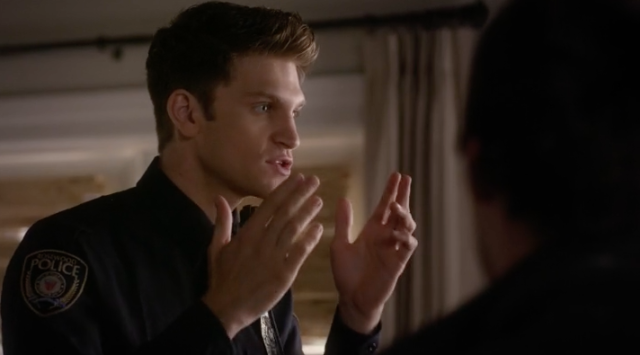 All three hours of Police Academy training just flew out of my head! I forgot I was a cop!

Then he goes to Spencer’s, where she is hanging out with Caleb, and its like Toby panicking about how the knife is his knife and he’s being framed and Caleb panicking about how he also is framed because of the other day when he went to Toby’s house to hold all his knives and Spencer’s eyes just lightin’ up like fireflies in a Ravenswood sky because it’s evidence-destroying time! How long has it been since she burned a murder weapon? Too long, friends. Too long. Well but Toby isn’t hearing that garbage! If he is going to get an award for Investigation (to go along with the stuffed seal he got for Marksmanship and the stuffed gorilla he got for Sand Racing), he cannot dabble in obstruction of justice. Toby and Caleb screech at each other for a minute about who gets the knife, until Spencer swoops in with the compromise of: Toby will leave the knife where it is so the police don’t find his and Caleb’s DNA on a bloody dagger in a dead girl’s yard, and Caleb also will leave the knife where it is so Toby can get his little trophy.

At the bookstore, there is a new guy in town. He is wearing a Ramones t-shirt, which, frankly, is all you need to know about him, but I’m going to give you a little extra. Pageboy hat. Chunky bracelets. Messenger bag over on the couch with like a RISD degree hanging halfway out of it and three unfinished screenplays that are basically his college Facebook status updates masquerading as fiction. A Dan Humphrey for every town, I guess. He says the word “slammin'” — as in, “It’s really important to me that this sign that says ‘books’ be slammin’ because how else will people know they’re in a bookstore?” — and Aria really must be losing her mind about college because that right there, just the whole entire package, was put on this earth to be her kryptonite. And she doesn’t even blink. Throw a pizza at a stranger on the street, awful Newsie! That’ll get her attention! 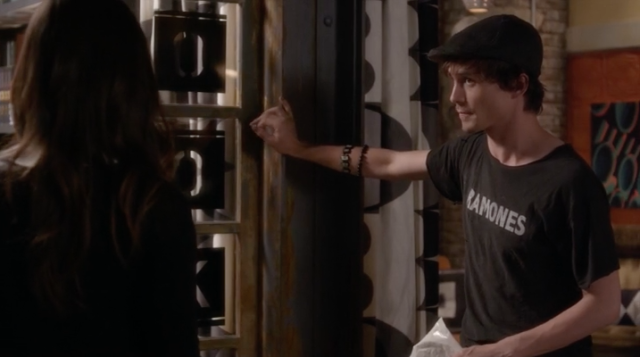 You know you love me. XOXO.

Ezra finally overhears Aria wailing about college and swoops in to explain: 1) Literally any person can go to Hollis College, no matter if they only attended ten days of high school, and so calm down because at least there’s that. 2) Her dad is a professor at at least two colleges, including Syracuse, so there’s also that. 3) The reason she got waitlisted at Talmadge is because — and this is so righteous, I love this — Jackie Molina works there now. You remember Jackie Molina, right? Ezra was engaged to her as told by his relationship status on his website page. This was before he met Aria but after but after Alex Mack, whose child he tried to purchase, I do believe you will remember.

Emily tells Aria what she needs to do is just write a nice letter to Jackie Molina explaining that she was stalked and seduced by her former English teacher who is Jackie’s former fiance and they can commiserate over Ezra’s extradimensional horribleness together. That is her ticket to higher education! Or something. (This episode really does make me feel like I haven’t taken my Adderall in a week. My working theory is the theme of season 5B is: Liars Chillaxin With Dudes They Haven’t Snogged and I’m not exactly prone to paying attention when the boys are on-screen. I’ll work on it.)

(I wonder what Paige is doing.) 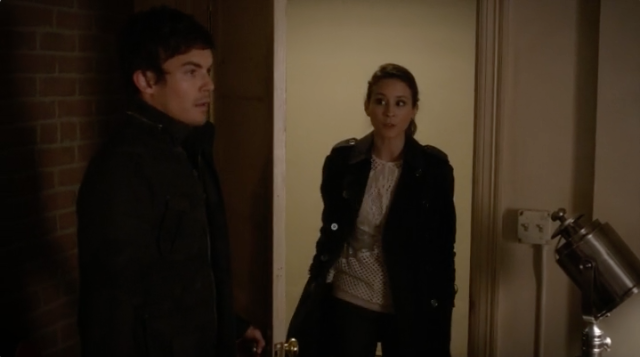 Are you still pretending this isn’t Ezra’s apartment, Caleb? I don’t have to take 100 Adderall to crack this mystery.

So Caleb calls Hanna at her Ballard College visitation weekend to tell her about Toby’s knife, and Hanna calls Spencer at her house/graveyard to corroborate Caleb’s story about Toby’s knife, and so Spencer goes speeding out of her house and clomping up to Caleb’s apartment, hollerin’ to beat the band. They need to find that knife! They need to set it ON FIRE! Fuck Toby’s cop awards! This business is serious!