When Emily arrives the bookstore to stuff her empanadas, she discovers that Ezra has hired a midnight caterer to bake and serve professionally prepared foods so Emily can enjoy opening night as a guest and but don’t worry, he’s still going to pay her. What he doesn’t get — and it’s good and right that he doesn’t get it because he should be involved in the drama of these children’s lives! — is that becoming a caterer was Emily’s way of trying to save her relationship with Paige, and if Pam Fields’ savory meat pies aren’t magical enough to heal this gaping wound in her heart, what hope do any of us have for happiness? 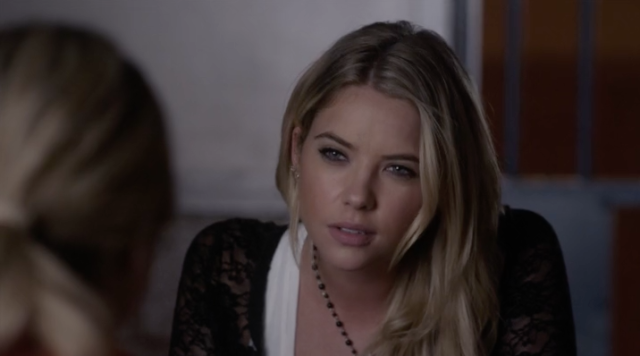 You are not an Alex Vause; that’s insane. You’re a Morello. 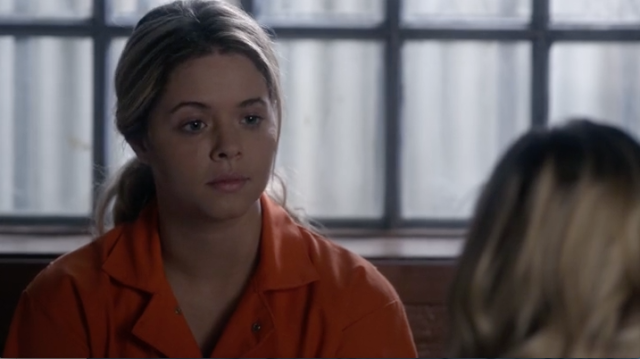 Bring me a pair of glasses and see how long you can go without making out with me.

Hanna decides to pay a little visit to the penitentiary.

Alison: Finally, good lord.
Hanna: I came here to tell you to stop whatever bullshit you’re doing with Holbrook.
Alison: Dude, if I were A — like if I really did have maical torture powers — do you not think I would have kept myself out of jail or breathed fire on you guys when you formed a human chain to keep me from running away?
Hanna: Probably, but I lost the last fuck I had to give in a pile of guts in an RV park last night, so.
Alison: See you at Aria’s funeral, I guess. I’ll be the one getting slapped in the head. 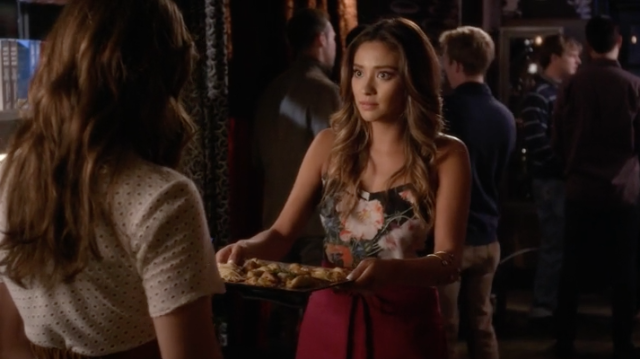 Well, you’d better learn to eat around the hair if you’re going to live up to Aria’s fan fiction fantasies.

At the bookstore opening, Emily tries to force feed Spencer an empanada, going so far as to tell her to EAT AROUND THE HAIR but Spencer has a whole other cooking problem and it is that she tried to cook a murder weapon and A stole it from her. It’s a problem for many reasons, including: she told Toby she was just going to leave it in the woods. When he finds out what she has done, he yells at her for ruining his life’s work of being a police officer and storms off into the night. She cries. Toby should probably go to California, too, to be honest. Because he is a hundred-year-old ghost soldier, Caleb seems made for this life, and because he is a monster person, Ezra also seems made for this life. Toby, like Paige, just wants to exist peacefully and do woodwork, man. Worse news than her boyfriend is so mad at her is the news that Boots the Newsie is moving into her backyard.

Emily goes into the kitchen and starts flinging stuff around and yelling at the caterer about how her relationship is over and fuck you and your caviar and your ability to prepare finger foods for hundreds of people without wanting to die. Emily is such a glory when she’s angry and heartbroken. Like when she got drunk at the school dance when Maya went to drug prison. And that time when she told Sydney she was going to eat her liver with some Cheerios. And like now. It’s weird. It’s like she becomes more flawless with every step she takes toward Radley. 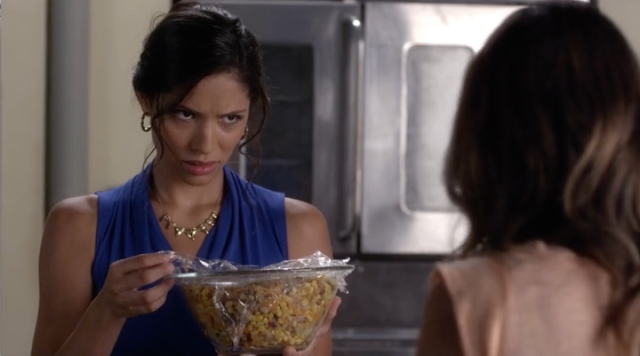 This knife work is terrible. What did you use, a hatchet? 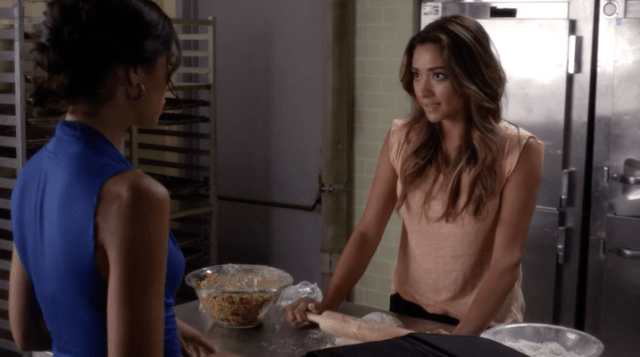 No, I worked with the same knife I used to KILL A GUY.

The caterer gives Emily so much side-eye, which also is a kind of glory — but then she helps Emily rescue her empanadas with some almonds on top or some kind of special sauce of whatever thing always saves the day on reality cooking competitions. I hope they don’t hook up. They probably are going to hook up. But I hope they don’t. The show could always time-jump if it wants to put Liars in relationships with adults, right? Just do that. Only age-appropriate relationships and let the Liars start talking to each other again instead of the boys in 2015! (I do hope the caterer stays, though. More women of color on the television is just the thing my heart needs! And goodness, a competent adult is a breath of fresh air!)

A tortures Aria by sending her a bookmark with her Talmadge essay printed on it. This after Ezra introduced her to a college admissions person just this very night! Oh, Aria! Why can you never appreciate what Ezra does for you! He’s watching your back, literally, every second of the day. Why do you always have to hurt him so! Can you just try to be slammin’, for like one second of your life?

Also, not slammin’? Hanna peeps Jason sneaking down the stairs after having had sexual intercourse with her mother. 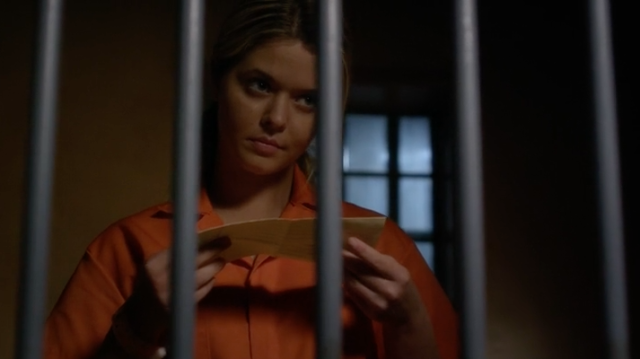 Oh, Aria. Spencer would never say “my nipples are erect for you.”

And at the jailhouse, Ali gets a new jumpsuit with a note inside, insisting that the Liars will see her very soon. I hope this means they will be joining her in prison.

A big ol’ thank you to Nicole (@PLLBigA) for the screencaps! Follow her on the Twitter machine so you can be in the know! And a big ol’ thank you for your patience. I know this recap is super late; it has been a week!