In the latest development of the legislative rollercoaster that is the Indiana Religious Freedom Restoration Act, Governor Mike Pence has pledged to “fix this and move forward,” while also reiterating that there’s nothing about the law that needs fixing.

After signing the bill into law, Pence and Indiana faced a backlash they seemed wholly unprepared for. Marc Benioff of Salesforce announced almost immediately that he was canceling all corporate programs that required travel to Indiana; Tim Cook of Apple wrote an op-ed for the Washington Post opposing the law “on behalf of Apple.” GenCon, which brings $50 million to Indiana annually, expressed interest in moving locations after its current contract in Indiana runs out. That’s only a small sample of the businesses, individuals and other lawmakers who have publicly distanced themselves from Indiana and from Pence. 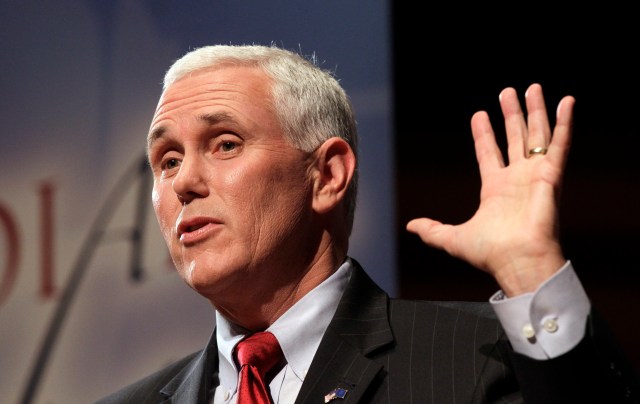 So is this outcry (and the looming threat of financial impact) why Pence is now backpedaling? Seems likely. He’s doing his best to do so while maintaining and air of innocence, though — even if that means coming across as almost unbelievably naive. Pence’s claim is that this bill has nothing to do with discrimination — that it’s been grossly mischaracterized by the media, as he said in a letter written for the Wall Street Journal, and that discrimination would be at odds with his strongly held personal values of Not Discriminating.

Pence again repeated that he “abhor(s) discrimination” and said the law was intended to “promote tolerance around the country.” The Indiana Republican, who has been floated as a potential 2016 presidential candidate, again repeated that he is unflinchingly opposed to discrimination. “If I was in a restaurant and saw a business owner deny services to someone because they were gay, I wouldn’t eat there anymore,” Pence repeated on Fox News.

If Pence really wanted to rebuild his image as a champion of justice, a better example might have been “If I was in a restaurant and saw a business owner deny services to someone because they were gay, I would take them to court, because that’s illegal.” After all, Pence has insisted that despite the fact that the law is now being “clarified,” it was never discriminatory in the first place, and didn’t allow for services to be denied based on religious convictions: “Pence, speaking with Fox News, maintained that the law is not discriminatory. He stressed that it “mirrors” one signed by President Clinton in 1993 and policies in effect, either by statute or court decision, in roughly 30 states.”

This is pretty patently untrue, however. As ThinkProgress broke down, and Yvonne discussed earlier, there are several key differences between Indiana’s Religious Freedom Restoration Act and others, including Clinton’s:

(For an even more thorough discussion of the problems with the legal language of the bill, check out IN Advance, a resource for Indiana attorneys that has a great discussion.)

There’s no way to know for sure whether Pence and his administration were actually legally naive enough to not know what these unique features of their RFRA mean, (UPDATE: actually it is, because it appears that back in February Pence was sent a letter signed by 30 expert law professors explaining this exact thing, so.) but we do know that they’re changing now. Although some are pushing for a wholesale repeal of the law, Republican House Speaker Brian Bosma doesn’t believe this is realistic. Bosma says it’s more likely that language will be added to “clarify” that the law “cannot be used to support the denial of goods, facilities or services to any member of the public.”

Ultimately, the story of Indiana’s RFRA doesn’t end in Indiana becoming a safer place for LGBT people or for any group that often suffers for the sake of “religious freedom,” although it’s arguable that at least it isn’t becoming a less safe place. And it’s an interesting data point to add to the growing portrait of the nation we now live in, one in which there’s both political capital and actual financial capital associated with ideals of equality and fairness for LGBT people. In 2014, when Arizona came close to enacting a similar law before it was vetoed by Governor Jan Brewer, the state faced backlash from LGBT groups and local businesses, which made a powerful statement — but that’s still a far cry from being directly criticized by Apple’s CEO and threatened with the loss of millions of dollars from outside agencies. It’s fascinating to see how much the value, both socially and literally, of siding with equality has risen. We’ll have to wait to see what kind of message this sends to other lawmakers across the country; for now, it seems like Indiana citizens will likely be able to buy sandwiches and haircuts in relative peace.