Welcome to your pop culture fix, a weekly journey into stories relevant to your interests for reasons I hope are very clear. For example: Orange is the New Black.

Orange is the New Black 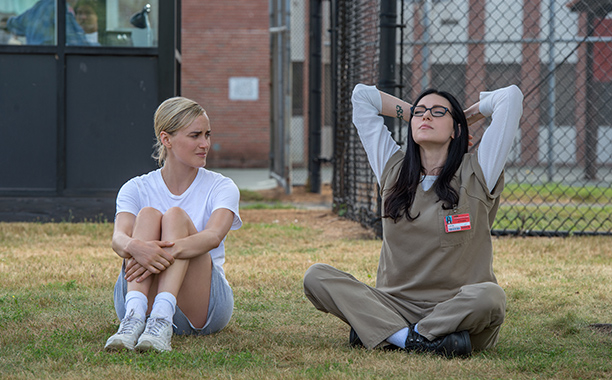 + Orange is the New Black premieres on Friday which means the internet is full of reviews and pictures that very well might be of interest to you. Emma Dibdin at Digital Spy says Season Four is its darkest yet, with one exception:

…despite the season’s bleakness, one beam of light is the burgeoning relationship between Soso and Poussey, which emerged in the season three finale and remains central throughout this season. It’s more or less a masterclass in how to write a love story with believable, smart conflict, developing both characters and creating a romance that it’s impossible not to root for. Four seasons in, Orange is the New Black has never been more skilled at maximising its diverse ensemble.

+ Entertainment Weekly has given Season Four a “B,” and says the show appears to be hurting from its rapidly expanding cast as well as tighter availability and therefore less screen time for some of the most beloved regulars, like Laverne Cox (Sophia), Danielle Brooks (Taystee) and Natasha Lyonne (Nicky). They lament:

Aside from a shrewd Muslim inmate (Amanda Stephen) and a celebrity lifestyle guru (Blair Brown), it’s getting harder to distinguish one warm body from the next, and the newbies don’t inspire the same fascination as the original crew.

+ Pop up restaurant “Litchfield Penetentiary Cafeteria,” which will be open June 16-17th at the OverEasy diner in Singapore, will serve “gourmet prison food” to fans of Orange is the New Black.

+ TV Guide claims to have all the information you could ever want. Do they really? You be the judge.

+ Here are the episode titles for Season Four, maybe.

+ An iconic Mexican telenovela villain will make a comeback in Season Four of Orange is the New Black.

+ The New York Times hung out with Danielle Brooks at her apartment in Fort Greene and talked to her about her whole life and stuff, NBD.

+ Ellen DeGeneres continues teasing us about whether or not there will be a lesbian couple in Finding Dory.

+ The much-anticipated James Franco remake of Mother May I Sleep With Danger, the most famous Lifetime movie in the history of the world, debuts on June 18th with a lesbian vampire twist! Donna Martin will star.

+ Following Whitney Houston’s tragic and untimely death, I wrote a piece about the ensuing discussion about her sexual orientation and relationship with Robin, which was one of those things that most gay people in the media knew but couldn’t really say because she’d never confirmed it herself. In a new book, Bobby Brown has confirmed Whitney’s bisexuality and said she may have been happier had she been able to be with Robyn Crawford. Here is a thing Jen Yamato wrote about that.

+ The 2016 Tonys were a vital reminder of why queer art matters.

+ Transgender representation on TV has come so far but also has a long way to go.

+ Actress/Musician Haviland Stillwell and Writer/Producer Ashley Reed got married in Savannah last weekend. I know this because I WAS THERE and it was really great.