More often than not, I want the music that pumps through my headphones to be heavy, fast, and loud. I adore music that straddles rock and metal, those songs that sit in that sweet little pocket where the riffs are chunky and the double-kicks are plentiful, but also, where it’s possible to make out the melody and the lyrics. Those songs are my #1 jam.

I never write about heavy rock or metal on this website because this is not fuckyeahheavymetal dot com, this is a place where cute girls with acoustic guitars are in high demand. There are super talented females in the heavier genres too, and I’ve featured a handful of them in this playlist. You’ll hear tracks from two of my favorite female-fronted bands, Lacuna Coil and Guano Apes, as well as female metal goddesses Kittie. There’s also a killer track from Amodus, the only heavy rock band (I’m aware of) that’s driven by females on instruments and a guy on the mic.

If you have sensitive ears then don’t fear this music, the tracks I’ve selected fall on the lighter side of heavy rock. I’d go as far as describing them as ‘pretty’. 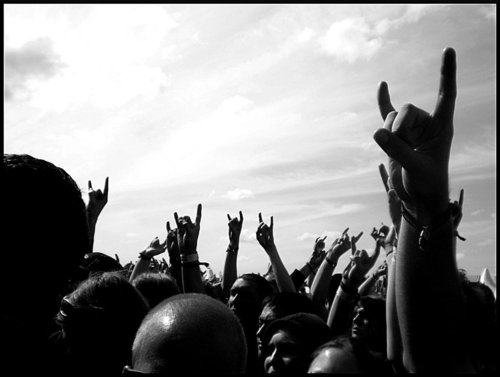 Add your favorite heavy rock or metal tracks in the comments below. And if you’re want to see these genres included in our music coverage more often then speak up, let me know you’re here.

Want to suggest a playlist theme? Hit me up on Formspring and someone on the team will make it for you.