One genre of games I have never been able to get into is strategy games. I am not strategic. I can’t play chess. Thinking more than one step ahead is boring so I just lose as quickly as possible so I can go back to playing something that will give me a sword. And strategy video games are even worse. Like, I like a bit of inventory management, but that is basically organizing my treasure. Strategy games want me to organize everything from treasure to taxes to the weather, and it is OVERWHELMING. I used to play Sim Earth on Super Nintendo when I was a kid and I would try to play it as instructed but then I would get bored waiting for an amoeba to become whatever an amoeba becomes so I would turn on god mode to evolve everything and then send them to the moon and then wipe out all of civilization with natural disasters, all over the course of about ten minutes.

Well guess what? I have found a strategy game in which the actual goal of the game is to wipe out all of civilization over the course of about ten minutes! In Plague Inc: Evolved, you play as the plague itself! The goal is to infect and eradicate the entire human race before they can develop a cure. Does it maybe hit a little close to home in these troubled times? It sure does! But I was a weird kid who was obsessed with epidemiology and every scary disease movie and now I am an arguably still weird adult who is still very interested in those things. It’s science. Kind of. 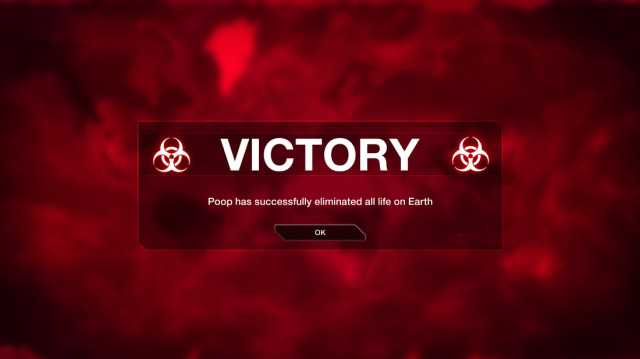 Anyway. I found this game already in my Steam library after seeing somebody on the internet playing it for a minute and thinking I really liked the interface so maybe I should give it a try. There’s nothing fancy going on here, graphics-wise. It starts up with a newsreel style intro like in some zombie movies, and it’s nothing new but dang does it put me in the mood to be a zombie. But the rest of the game is spent looking at a world map and a few menus. It’s just a really clean, user friendly layout. Everything is where you expect it to be and the controls work like you expect them to work. And It’s so satisfying to look at once you get up and running. As your disease starts to flourish, you see that reflected the map as red (or sometimes not red, depending on the disease type) dots popping up and spreading at increasing speed, and it’s so simple and perfect and upsetting and gross without actually showing anything at all. (It’s particularly satisfying when you play as a fungus because the spread happens in really sudden bursts and it’s so beautiful and awful.) 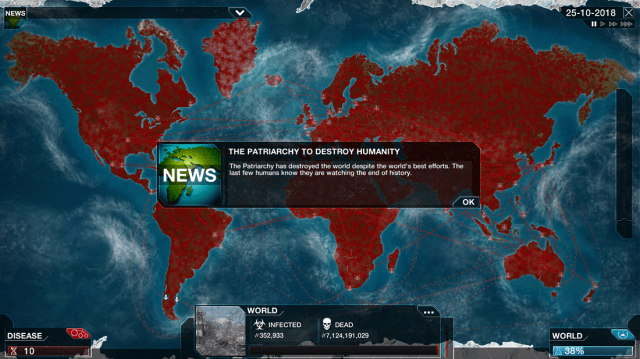 The base game starts you out with only Bacteria to work with. This is a pretty straightforward playthrough that works as a tutorial. Beat that to unlock Virus, then Fungus, then Neurax Worm whatever that is, etc. They all play a little different, but the gameplay loop is basically the same: Pick a country to be the starting point of your epidemic, Infect people to get points (which is illustrated by bubbles showing up on the map that you pop and they release a cloud of badness), use points to evolve the disease, find the right balance of infectivity and severity to get as many people infected as possible before anybody notices, then evolve to get deadly and race against science to kill everything before they can kill you. But also don’t evolve TOO fast, because if everybody dies there is nobody left to infect other people and the disease can basically kill its own self. The different disease types spread in different ways and at different speeds, and have different symptom sets. What works for a virus won’t necessarily work for a fungus. Some symptoms make you more infectious, but they might also make people pay more attention to you and actively start working to stop you. 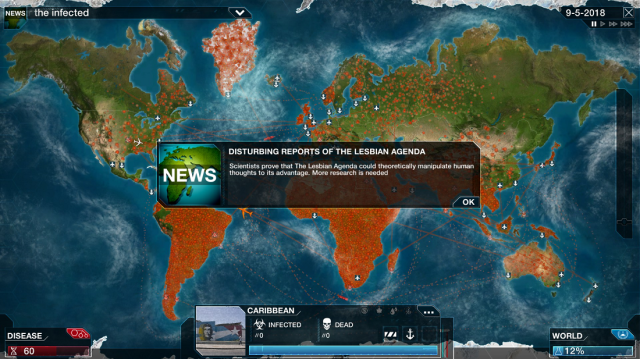 The new fad sweeping the nation!

You’re also fighting against geography. Like, I have begun to see Greenland as my mortal enemy because they only have one seaport and no airport and I can murder the entire world sometimes while they are just happy and healthy and ruining my life. Right now I’m trying to win with a zombie plague, which works a lot differently than the previous diseases because the cure stops mattering once you have zombies, so now I am fighting the military which is a nice change of pace. Or it would be if I could actually beat them, but I’ll get there eventually. Also I can send my zombie hordes across the ocean to GREENLAND and it feels so good. 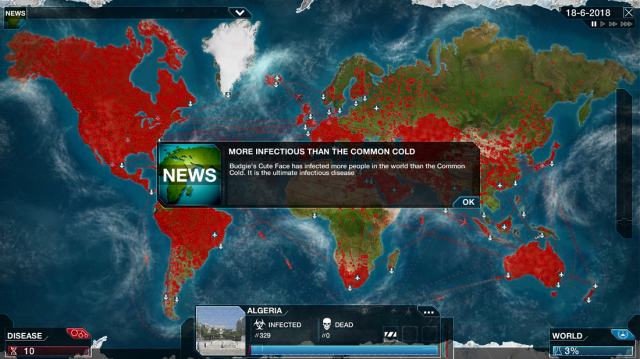 Beyond the basic game, which has four difficulty levels ranging from Easy (Nobody washes their hands, sick people get hugs!) up to Mega Brutal, there are also scenarios where you work with real diseases or under specific challenge conditions. And on top of that, there are a ton of user-created scenarios you can download through the Steam mod workshop. I haven’t even tried any of these yet because I am still struggling with zombies, but I will, because I can’t stop playing this game. I have opened the game up and played a round four different times while writing this.

The only real critique I have, besides that it is morally not very good to kill everybody, is that the scientists are way too effective. If I have murdered all but the last million humans on Earth, what are the chances that those survivors are all scientists and are all still able to effectively work on the cure? In this game, the answer to that seems to be one hundred percent. Everybody is a scientist. I’m not arguing that the game should be made easier, on normal mode it’s almost too easy, but I wish it could be made harder in different ways. 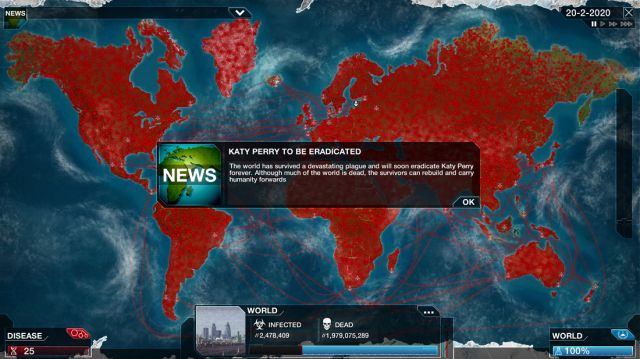 I’m playing on PC, where it’s available for both Windows and Mac for $15, but it’s out for Android and iOs for free. I gave the mobile version a try just to see what’s what, and it’s pretty good if a bit limited. You only get some of the content; you’d have to pay to upgrade to unlock a lot of the disease types. And it looks cheaper (which, it is free, so), like instead of the pulsating red dots to show your spreading epidemic you only see a dull red miasma, and the menus aren’t as nicely organized. I also missed the easy spacebar pause on PC, you have to click on a button to pause the game on mobile, but on the other hand it’s a lot quicker to pop the bubbles with a touchscreen than with a mouse. (I also couldn’t figure out how to exit the game?) But overall it’s still a completely playable and fun port that I recommend for any of you who have a commute on a vehicle that you are not in charge of driving.

This is the opposite of the games I usually play and it is a very welcome break. There is no plot. I AM the plot. Nothing is scary because I am the scariest thing. There are no feelings besides my frustration with Greenland, and to be honest even losing is a bit uplifting. But I guess I do kind of wish there was treasure to organize.