“Even the most passionate Pink fans couldn’t have predicted that this feisty pop star was capable of selling out a whooping 58 stadium shows in a country with only 21 million people. But she did, and I was one of the 660,000 Australians who helped her out. Four times.” 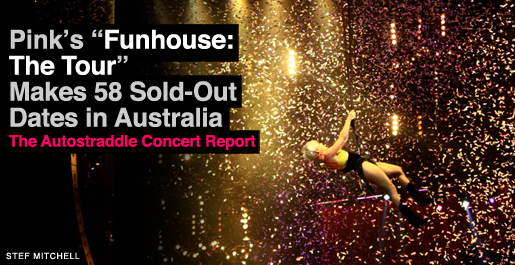 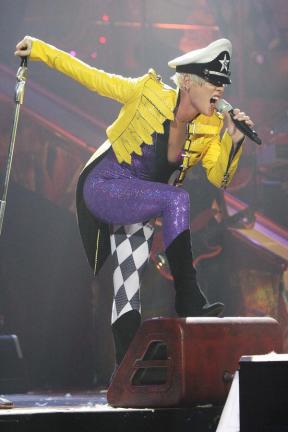 What do you do when you release a 10x platinum record heavily inspired by separation, and then renew your vows with its antagonist soon after?

If you’re P!nk, you tour said record with your ex/husband in tow, you call it Funhouse: The Tour, and you spend an extra, extra long time in a country that will find your ‘fuck it’ attitude not confusing but endearing.

Australia caught Pink fever during 2001’s “Can’t Take Me Home” and now, four records later, Pink’s 2008 Funhouse album — originally entitled ‘Heartbreak is a Motherfucker’ — has been dominating the airwaves with #1 hits like ‘So What’ and ‘Sober.’ And after Funhouse: The Album came Funhouse: The Tour, a four-month long record-breaking extravaganza that has solidified Pink’s place as the highest grossing female artist in Australian history. Again. The girl’s only breaking her own records, residue from 2007’s Stupid Girls tour.

Still, I don’t think even the most passionate Pink fans predicted that this feisty pop star was capable of selling out a whooping 58 stadium shows in a country with only 21 million people. But she did, and I was one of the 660,000 Australians who helped her out.

It’s important to note that while you won’t ever find Pink amongst my Top 10 albums of all time, her concerts are hands down the best I’ve ever seen.

Yeah I saw Pink four times. Excessive? Maybe. But it’s important to note that while you won’t ever find Pink amongst my Top 10 albums of all time, her concerts are hands down the best I’ve ever seen. And I’ve seen a LOT of concerts. Now I’m going to explain why, so when the Funhouse tour hits the USA this month and Europe thereafter, you may be inclined to check it out. And you MUST.

But not without a little help from my friends.

I’d like to introduce you to Stef Mitchell, a 23 year old photographer and journalist from Sydney, Australia. Stef will be bringing you some stellar Autostraddle features in the future, so you two should get acquainted now. Stef’s a keen skateboarder, a mad blogger, a habitual hoodie wearer and a girl whose androgyny often sees her mistaken for a boy.

Stef’ll be tearing up NYC over the next few months as she does an internship with Annie Leibovitz and ladies, she’s single. Say hello. 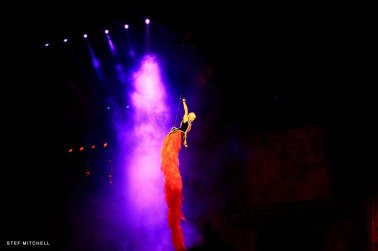 STEF: Hi! I thought doing the live photography for this Pink piece would be fun – until I was faced with the challenge of taking photos in a strictly ‘NO PHOTOGRAPHY’ venue. The minute I started snapping, a keen security guard circled, swooped in and shut me down. So while I was able to get one or two decent shots off, we’ve had to primarily rely on words and official Pink tour photos to take you there.

But First, Some Perspective On Just How Big Pink Is in Australia.

There’s no doubt that Pink is a success in the USA. Her albums chart, her club shows sell out. But compared to her Australian and European popularity well, there is no comparison. In Australia, Pink has outsold artists that are considered international superstars. To paint you a picture: On her last visit to Sydney, Lady Gaga played 2 concerts. Beyonce played 2. Madonna played 3. Britney will play 4. And Pink? She just played 12. She’s even ripped records from the hands of Australia’s national treasure, gay icon and pop princess, Kylie Minogue.

In Australia, Pink has outsold artists that are considered international superstars.

Her raging popularity in our country is hard to believe, and even harder to explain. Talking to Ellen Degeneres earlier this year, Pink said, “[Australians] ‘get’ me.” And we do. I do.

We get that the bad-ass, loud mouthed, rule breakin’ popstar we see on stage and screen is almost like a parody, a reputation that has been partly earned but mostly played up.

And we get that it’s our choice to swallow it hook, line and sinker.

She makes us want to buy into that tough-as-nails exterior, and so we do. 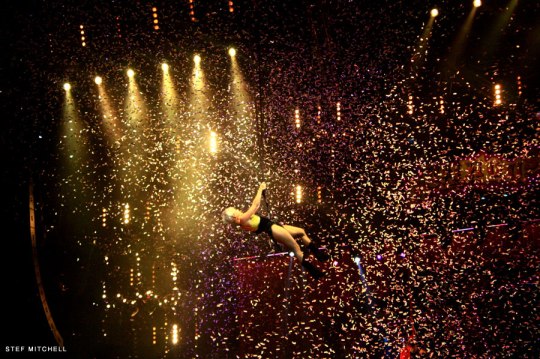 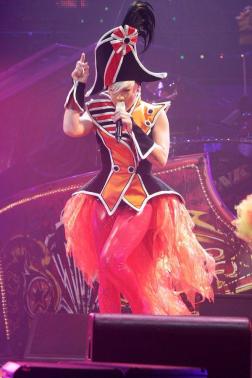 One thing that stands out about Pink is that she’s visibly grateful for her fans and her success. Her popularity had reached such great heights that for the first ever time, she’ll finally headline a stadium tour in her own country. And why not, she’s been doing it in other countries for years. In between songs at her final Sydney show, this had her gushing: “You’ve kept me here for so long now that they’ve [America] become curious, they finally want to see what the fuss is about. I can’t wait to show them what Australia and Europe have known for years,” Pink jokes. “My mom’s really excited because after this tour she’ll finally be able to show me off to her friends. I can finally show her and everyone else that I didn’t turn out like they said I would.”

Stef wasn’t a big Pink fan at first, either.

STEF: It’s true, before this concert I’d never paid much attention to Pink. I’d always just thought of her as a slightly irritating voice on the radio and, while I thought putting her ex in the ‘So What!’ film clip was ballsy and funny, overall she has never really appealed. But by the time I walked out of the stadium, I was converted. I discovered she’s a true entertainer, she has this raw talent that brings a stadium to life. I think part of what has brought thousands of people to see her night after night is the way that she’s completely in tune with the Australian psyche, from her firm grasp on sarcasm and love of VB (Australian beer) to the way she so casually strolls around on stage barefoot, in jeans and a t-shirt. Assimilating or accommodating to the local culture isn’t something that American artists do well, if at all. Yet on stage Pink projects this down-to-earth, carefree spirit that makes me want to have a beer with her. It makes me think that she’d be up for it, too.

Also, her cover of The Devinyls’ ‘I Touch Myself’ was one of the hottest things I have ever seen. Check it out.

In Australia, Pink has a lesbian following. So I wasn’t surprised to walk onto the dance floor and be met by a sea of alternative lifestyle haircuts, popped collars and skinny ties. We took our place at the back, right behind a messy drunk lesbian couple who spent the night dancing to their own beat, gyrating against each other but mostly against Stef.

In Australia, Pink has a lesbian following. So I wasn’t surprised to walk onto the dance floor and be met by a sea of alternative lifestyle haircuts, popped collars and skinny ties.

Pink warned this tour would be “higher, faster, bigger, better” than the last and so when the lights dimmed and the opening riffs of ‘Highway To Hell’ kick in, I braced myself for the best. All of a sudden Pink soared out of a giant Jack-In-A-Box, flying over the crowd on a circular trapeze with the feathers from her bright red spandex burlesque costume trailing meters below her. And if the AC/DC tribute wasn’t enough to get the Aussies to go wild (nicely played, Pink), it only amped up when she landed on stage and kicked into ‘Bad Influence’ and we were ON.

Pink Wasn’t Kidding When She Promised Us A Funhouse.

In terms of spectacle and set design, the night rivaled Cirque du Soleil. The dancers were dressed as court jesters, french maids and ballerinas, dancing around a carnival slash Moulin Rogue inspired stage complete with slides, distortion mirrors and giant inflatable evil clowns. There were enough acrobatics to rival the best of the big tops and as Pink spun through the air, the notes weren’t perfect but her performance was. The level of fitness and athleticism on display was unexpected, we could see her abs from the back of the stadium. 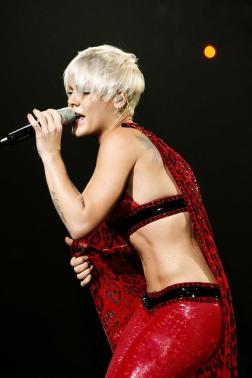 The concert had layers, emotional highs and lows. In between endearing banter with her musicians and the crowd and half-assed boy band choreography, P!nk took great delight in teaching us how to do ‘The Sprinkler’ and making jokes about dance floor brawls [“You Australian girls really know how to throw down!”]

And then there are the lows. Moving to the edge of the stage for an acoustic set, Pink stalled for time, making quips and talking shit before reprimanding herself for being so easily distracted. She requested that “we all need to get sad for 3 minutes” because ‘I Don’t Believe You’, the album’s most prominent heartbreak song, “needs to be performed with tears and agony.”

STEF: After watching the drunk couple in front of us hug sloppily and dedicate the aforementioned song to each other with their eyes, I was glad for the change in pace. Proving to be an official freak of nature, Pink busted out some Soleil-like moves on a trapeze at a height that I’d prefer not to stand at, let alone leap from bar to bar from. The most insane part was perhaps the fact that she could hold notes and continue to sound amazing while being thrown around like a rag doll at 20 feet in the air. At one stage Pink and her trapeze partner had a collision mid catch and despite a loud, semi-violent slap, she didn’t miss one bar. It only added to her reputation of being the punk ass woman that she is. Ten points.

The second half of the set was filled impressive covers including Zeppelin’s ‘Baby I’m Gonna Leave You’ and Gnarls Barkley’s ‘Crazy’, as well as an epic rendition of Queen’s ‘Bohemian Rhapsody’, during which she ran around stage conducting like the Ringmaster she is.

In the encore, ‘Glitter In The Air’, as she’s suspended from a bungee cord metres above a dead silent crowd, she sings “Will it ever get better than tonight?”

Probably not. Well, there’s always the next tour … 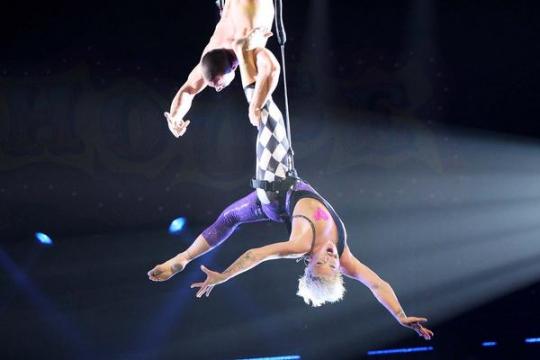