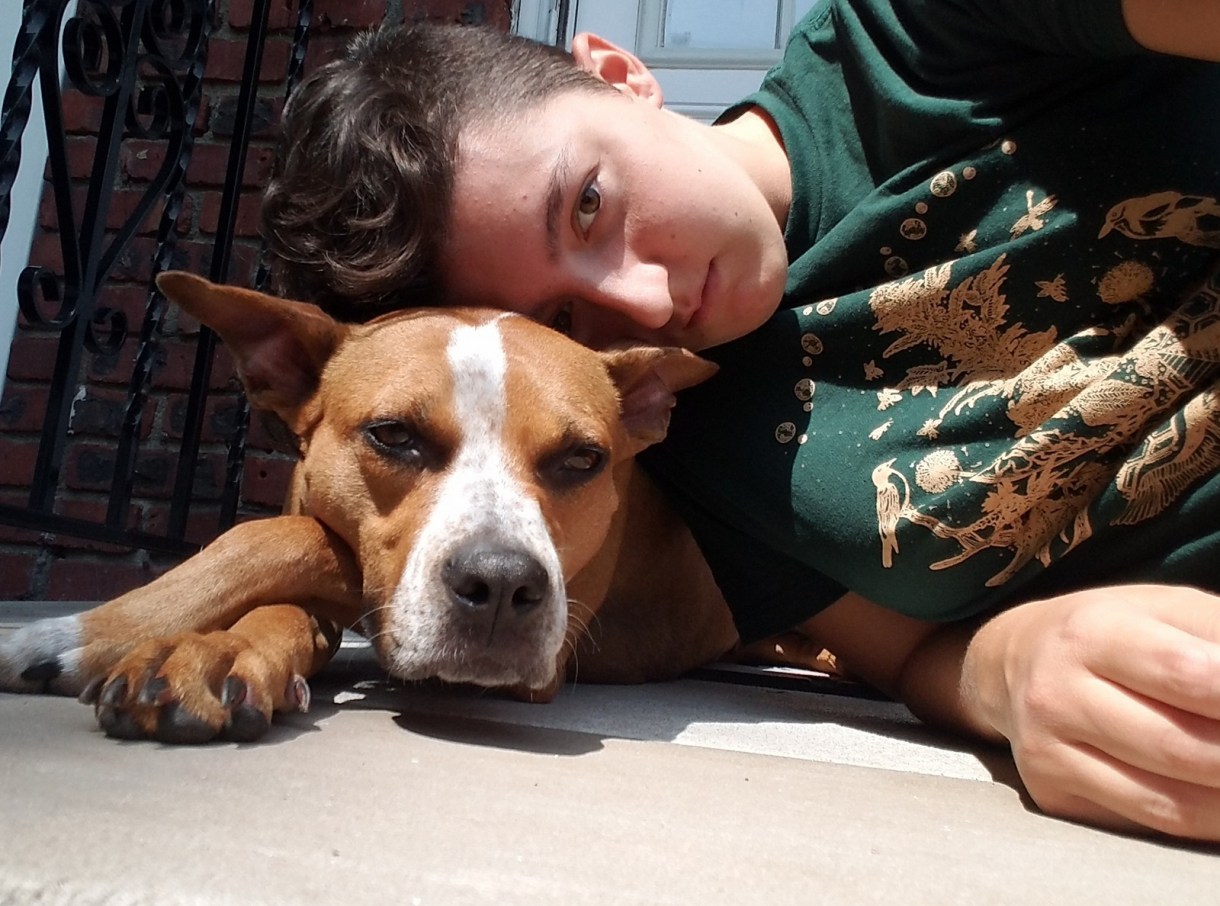 “We adopted Sandy from a local shelter about two years ago, where she was rescued as a stray from South Carolina along with her four puppies. She’s my unofficial emotional support dog, crosses her paws when she lays down, and recently started contributing to dismantling the patriarchy/crushing gender norms by peeing with her leg up. We’re just a dog person and a people dog going on adventures together and eatin’ snacks. Instagram: @krstnasmth” 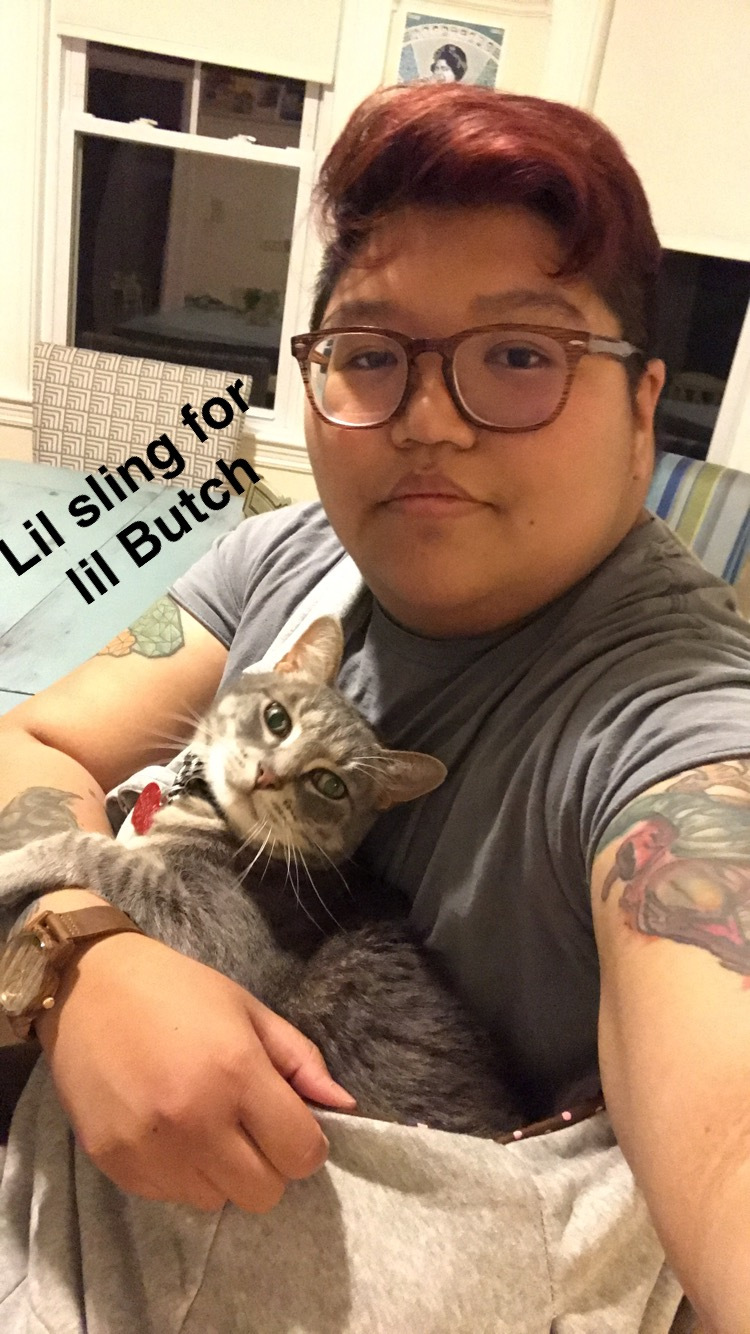 “I adopted Butch last summer, I visited him to see if we would be a good fit and once I entered the room, he immediately reached up and hugged me. I could TAIL we had a PAW-sitive connection. and his name was too purr-fect to change. He’s a cat who loves to be in a baby sling while I’m working from home or watching movies (aka Netflix & sling). His Instagram is @ButchWithTheBowtie” 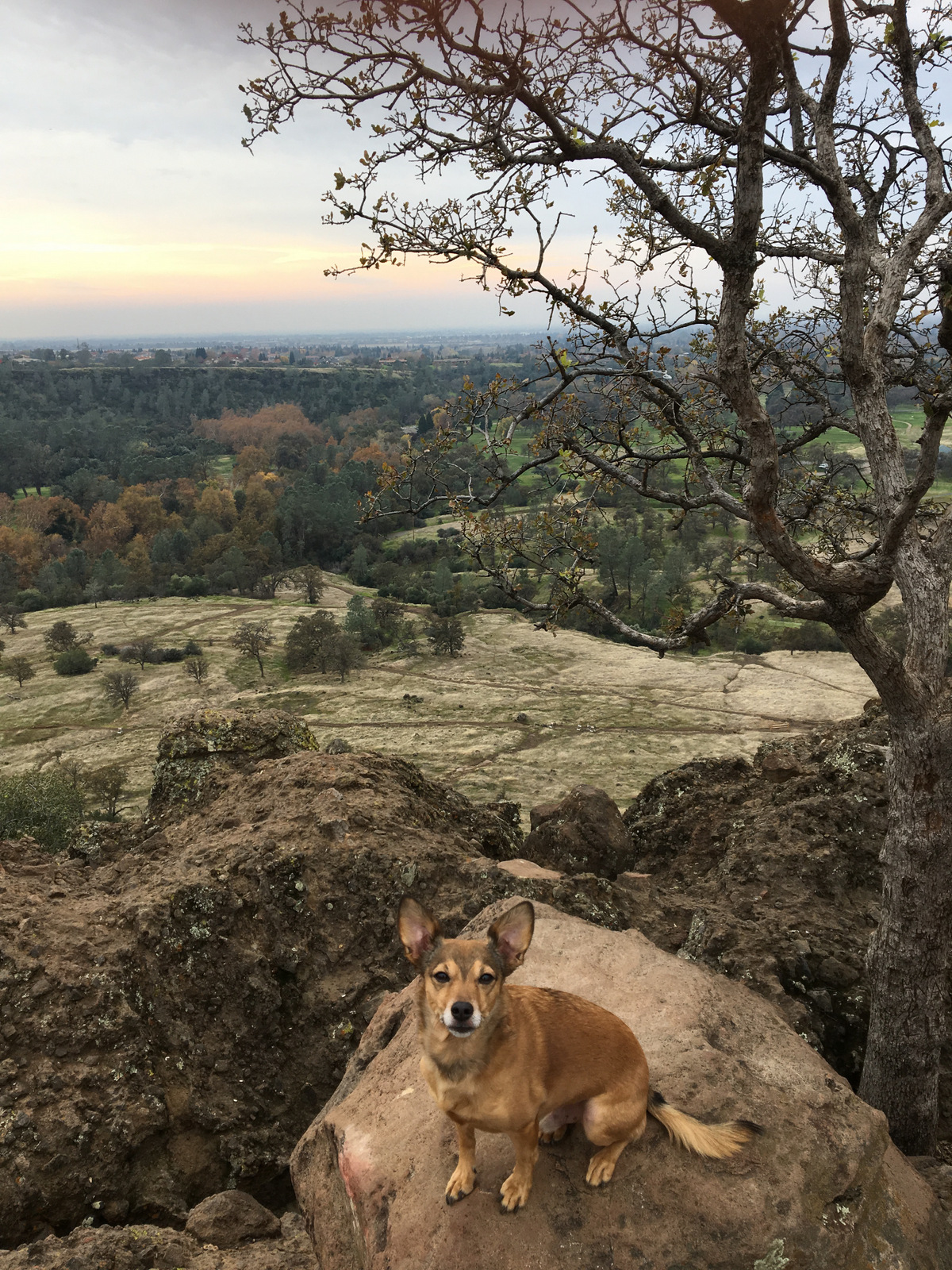 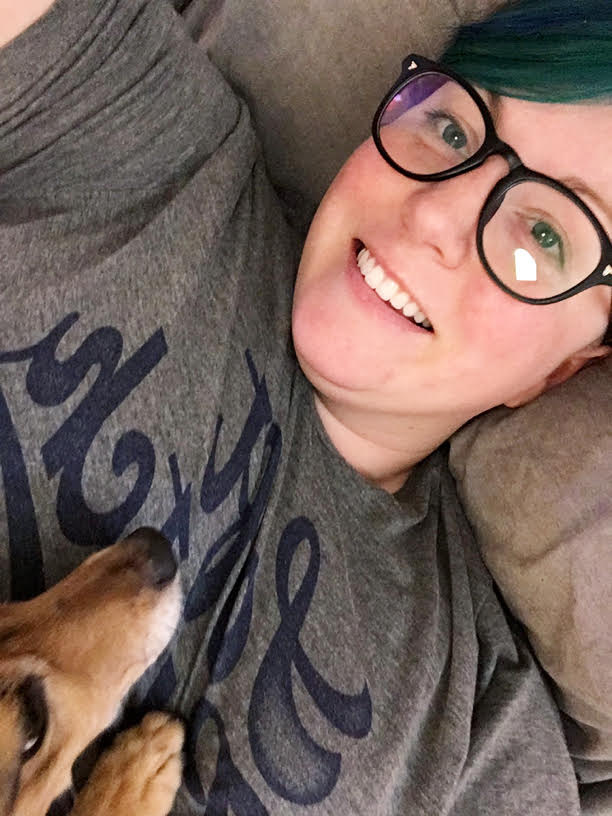 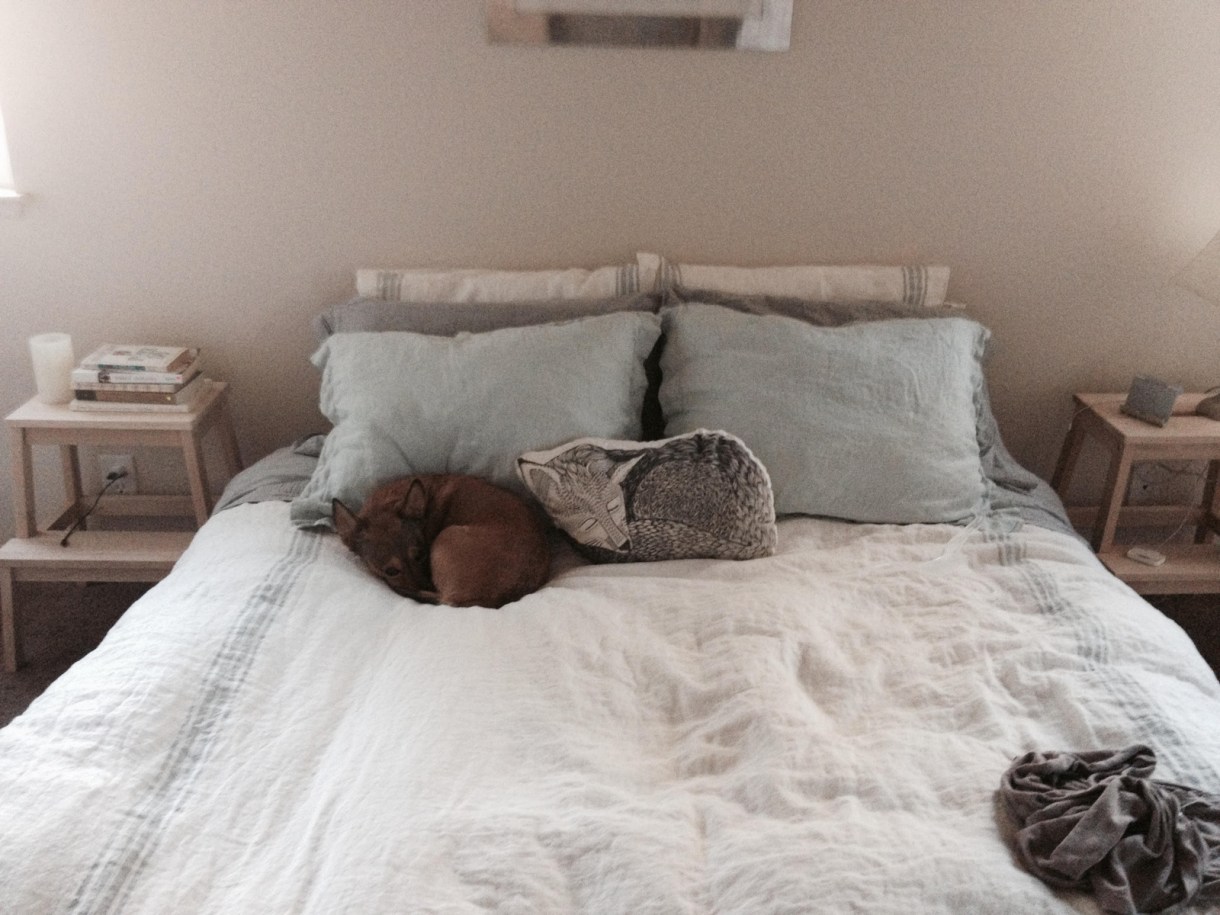 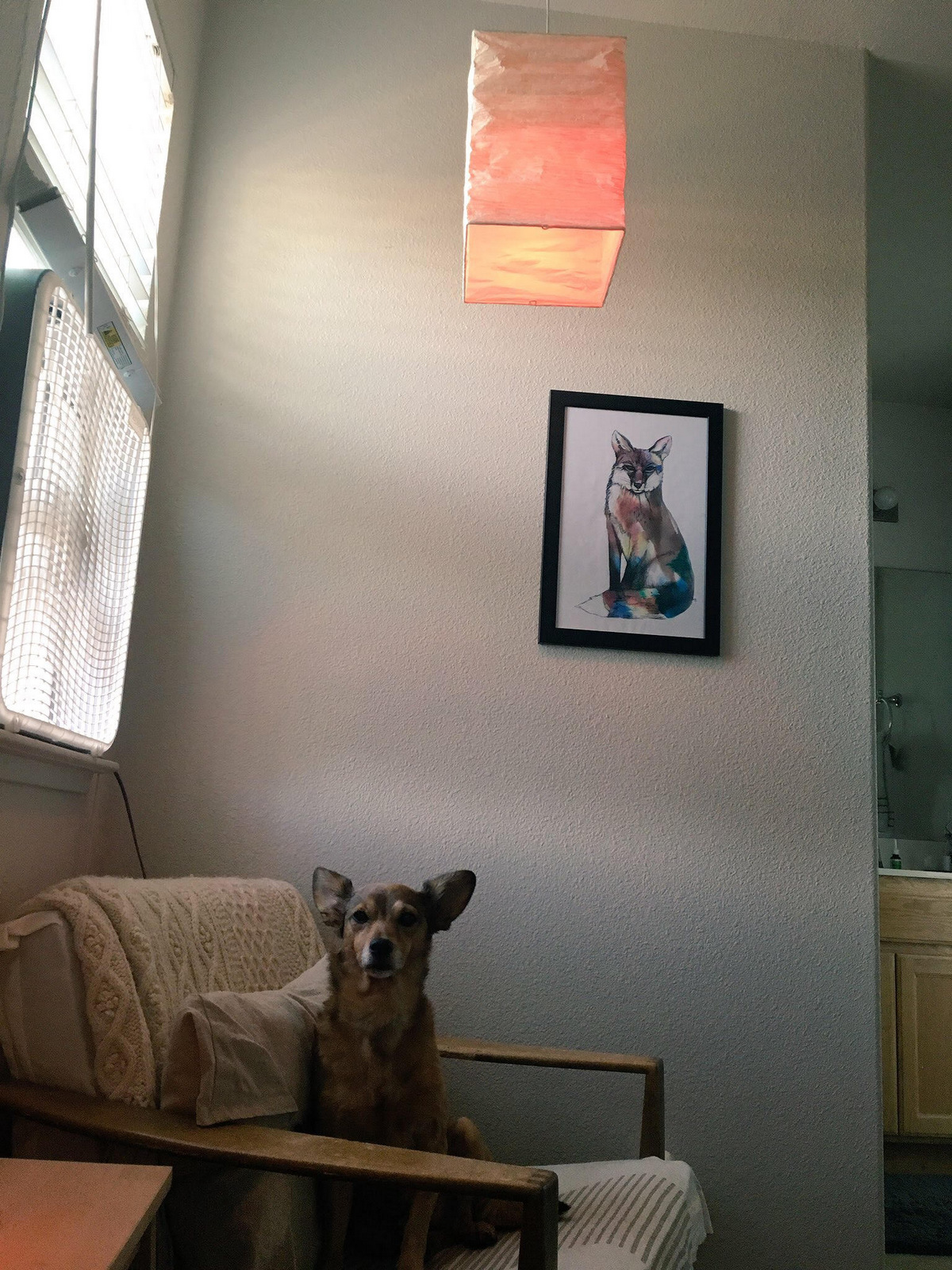 “Cyrus came to me when he was just four months old from a woman who did informal dog rescues. She brought him into my work one day and I was SMITTEN, but told her I couldn’t get a dog yet, being all of 21 years old and living in a new tow, it was too much responsibility. She smiled and said “let me leave you my number, just in case.” I called her twenty minutes later to tell her I’d changed my mind. He’s my very best buddy. He loves the snow and will hold an apple between his paws as he eats it, and just six months ago, I finally taught him to fist bump. I cannot even tell you how much he is a Good Dog.” 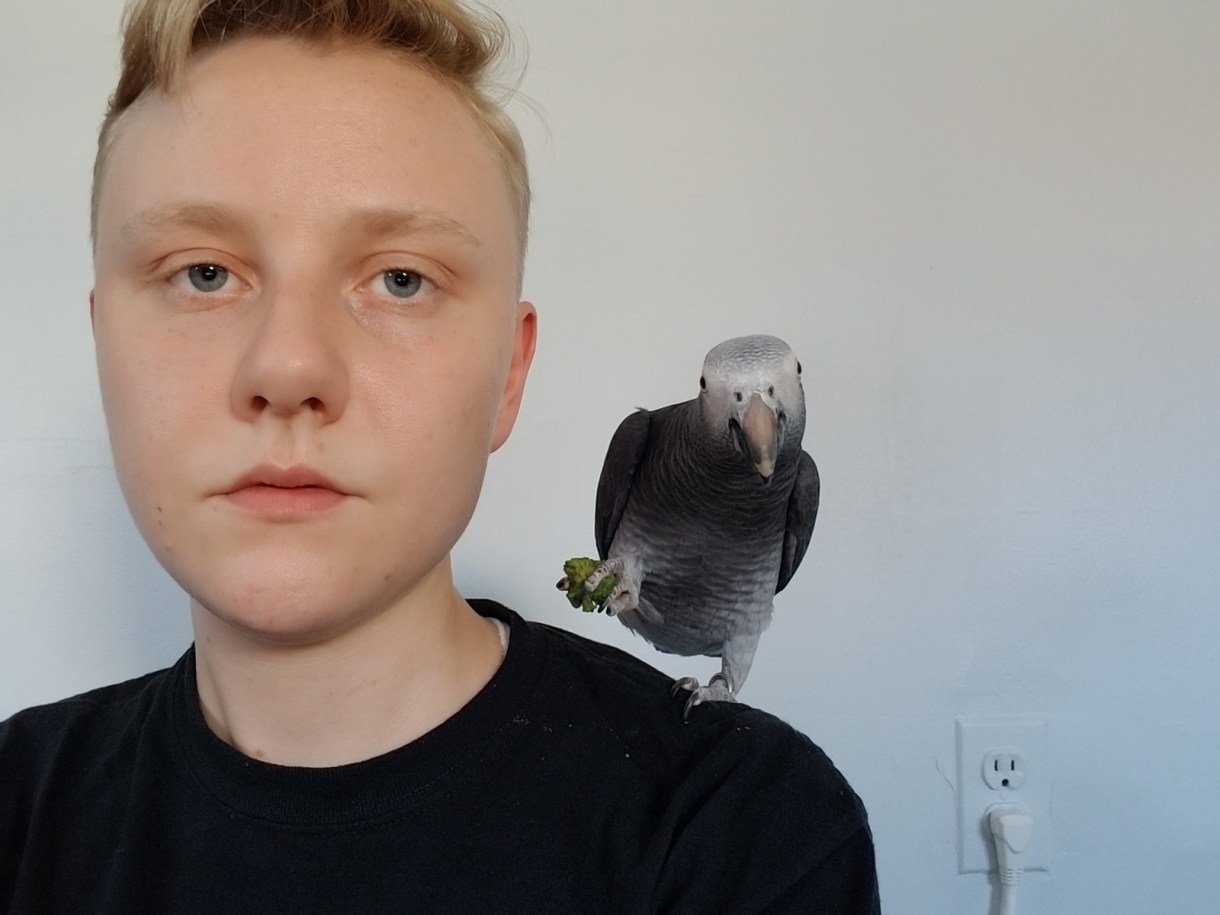 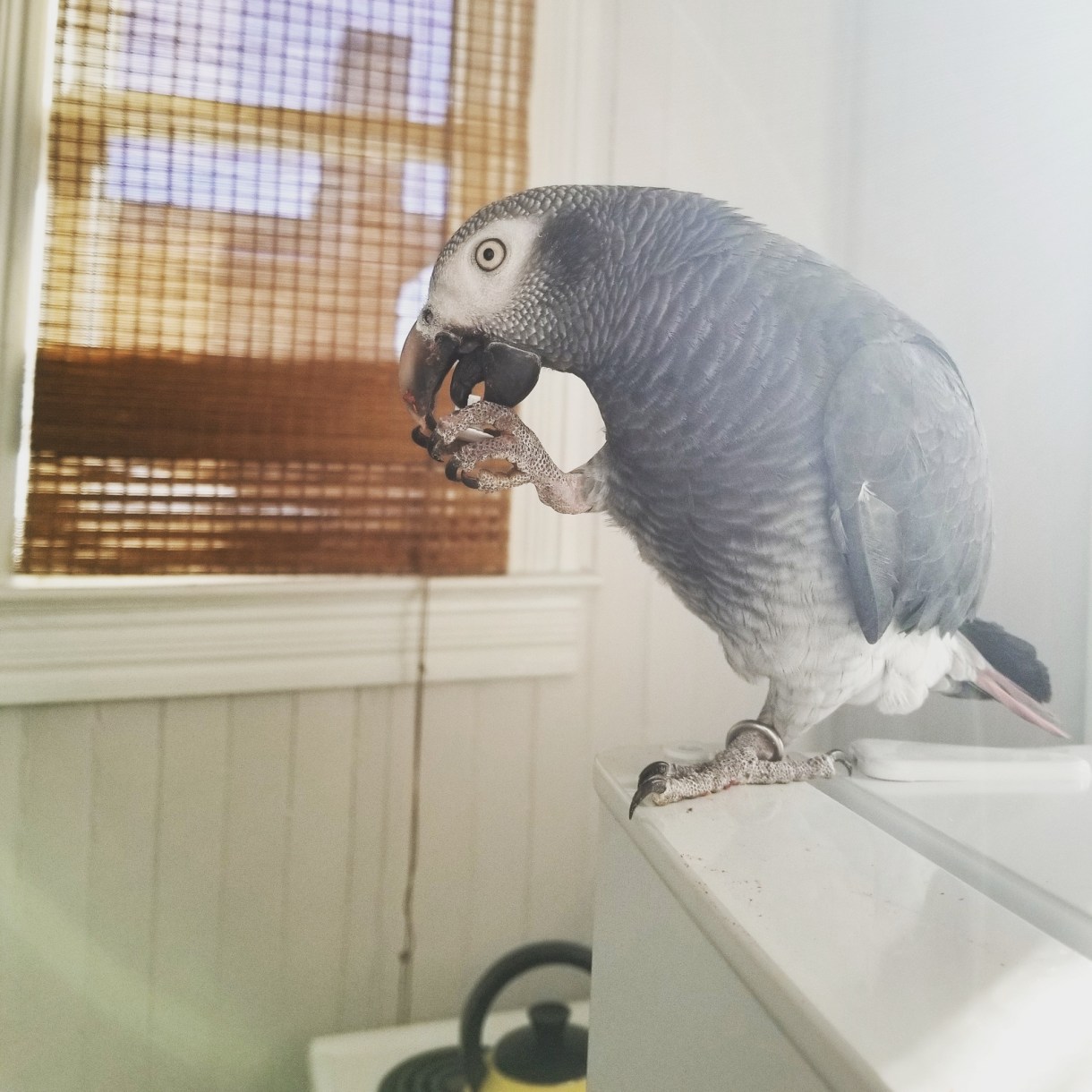 “Once, when I was very depressed, and needed a reason, I put a down-payment on a parrot that hadn’t even hatched yet. This is like the pet equivalent to deciding, on impulse, to have a human child with a one-night-stand (only worse, because it’s a bird). He bites, he’s afraid of shoes, and he’s the only reason I get out of bed.” 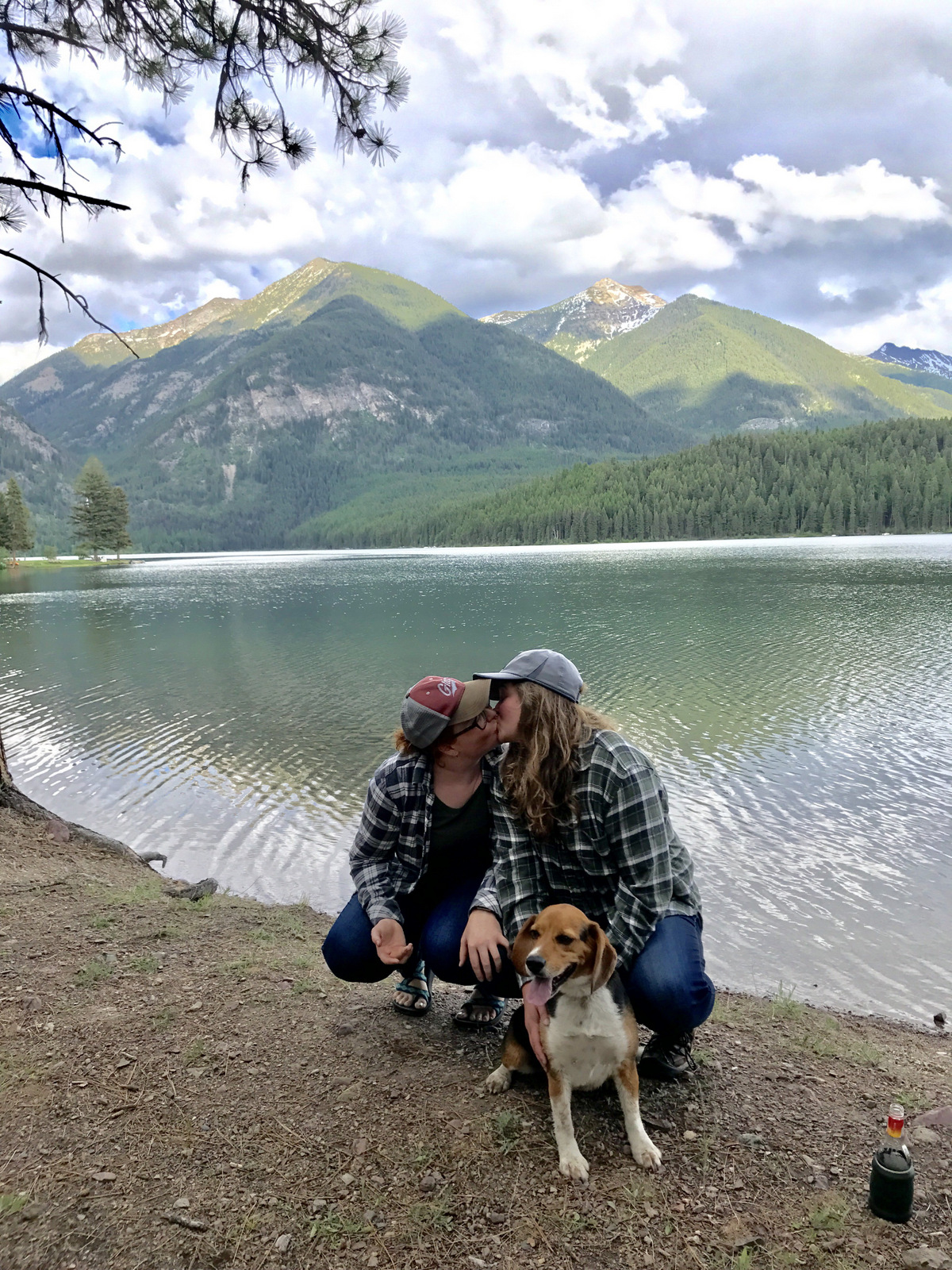 “His favorite activity is camping and hiking with us and sleeping in the yard. He was the runt of the litter and a gift to Yvonne. He likes to lick and sit on feet which keeps them nice and toasty in the winter.” 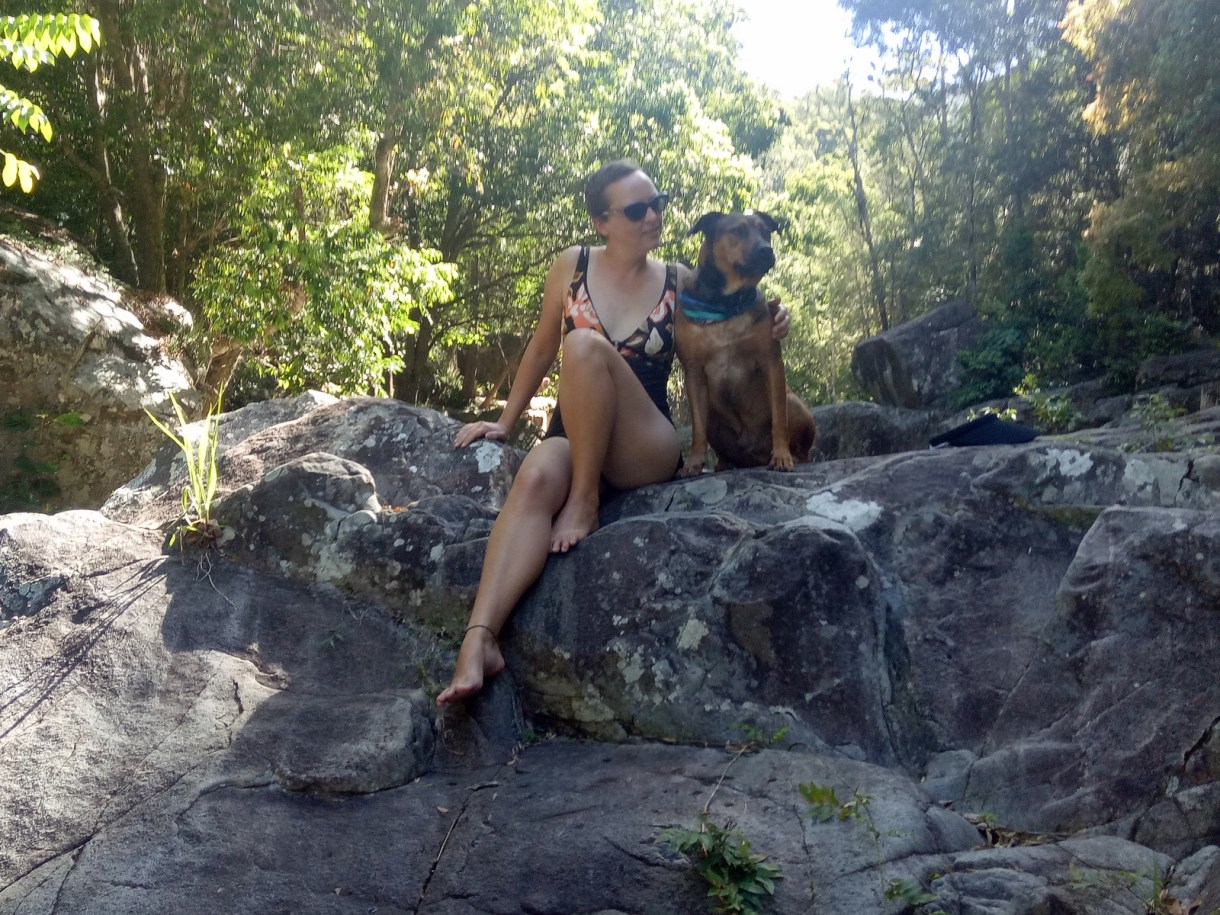 “I found Whisky through a rescue group in Queensland, Australia who assured me he was good enough with other dogs and cats to be able to come to work with me (I work as a veterinarian). I chose his name because he looks like a delicious whisky and I think it’s a pleasantly gender neutral name. One of the best things about Whisky is that he’s a big lap dog and always cuddles with me. We like to walk, swim, cuddle, and sleep in. One of the weirdest things about Whisky is that he loooves a sleep in, I’m often the one waking him up for a walk and breakfast.” 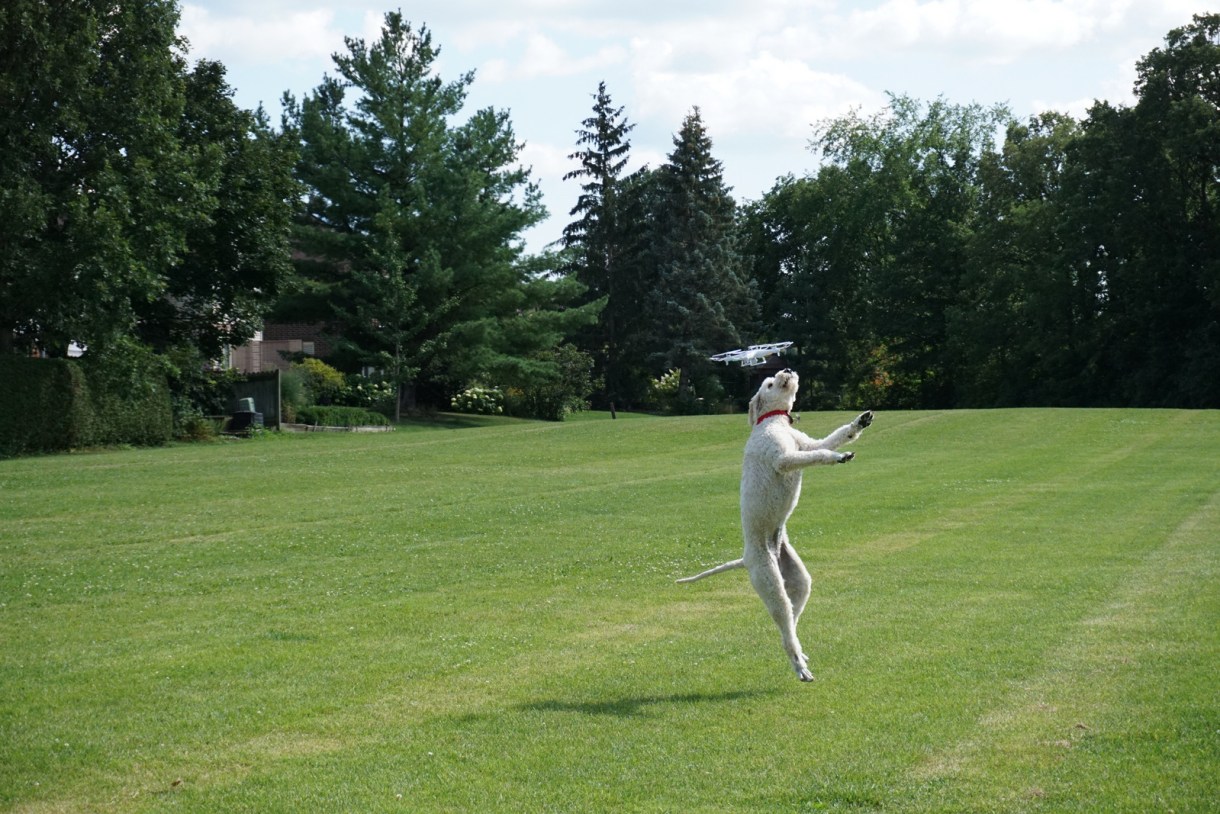 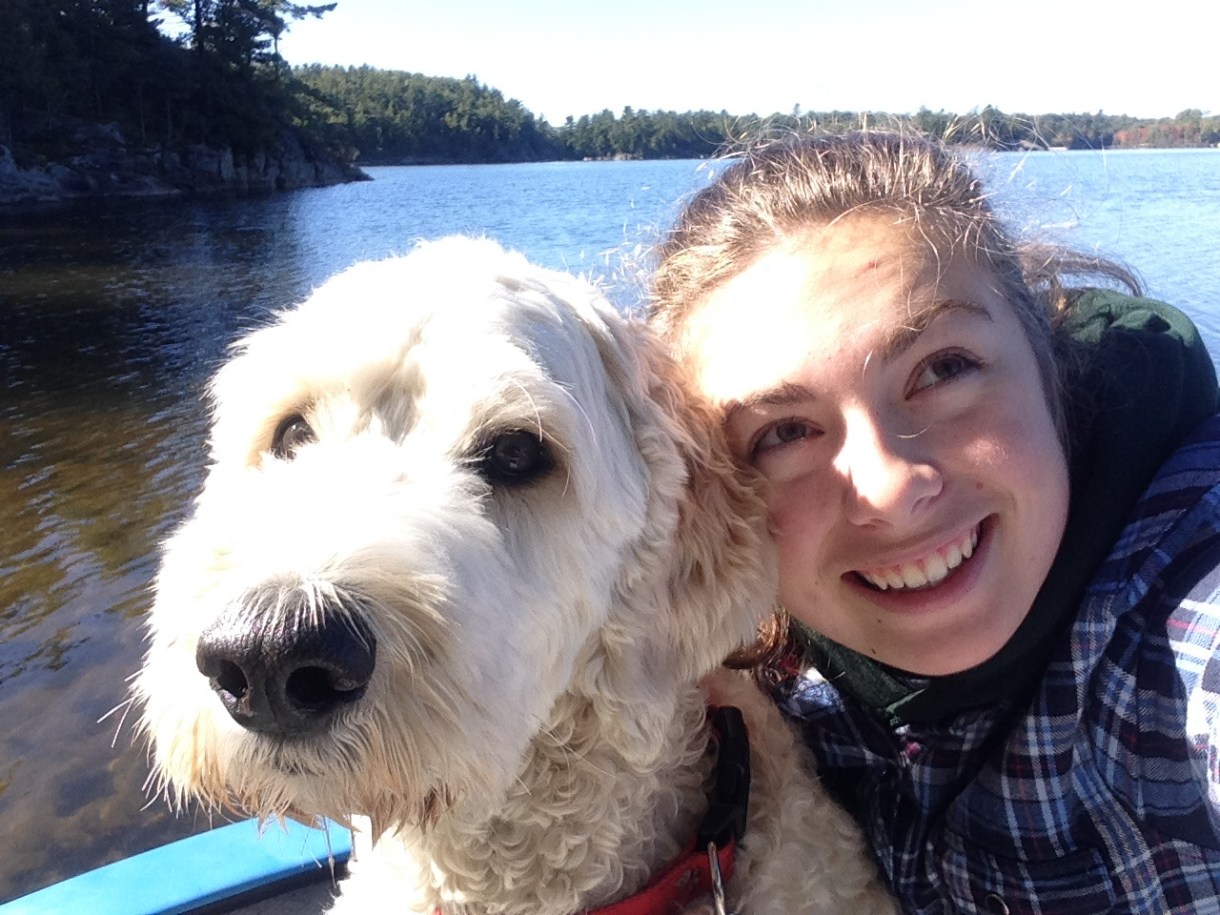 “After ten years since our last furry friend, my parents gave the okay on Christmas day. A few weeks later we went to “just look”… were they trying to convince themselves? She came back with us. Believe it or not, her name wasn’t a Buffy thing! We’re very outdoorsy so she was almost named after a national park or mountain, but Willow seemed to peak her interest the most. The best thing about her is she’s soft, dopey, generally very happy (despite the pictured pose), and very bad at all traditional dog things except running, barking, and swimming.

The dog is obsessed with snow and the cold, so I build her mountains in the backyard to slide down and we go cross-country skiing together. She likes to kayak well enough, but gets seasick. Aside from a human-like attachment to a teddy bear, Willow hates to miss out on any travel/adventure so she’ll pull crazy Houdini maneuvers to get into the car or boat and refuse to move. Also, while terrified of loud noises she’ll chase drones to the ends of the earth.”

Abi and Ziggy / My Garage in Austin, TX 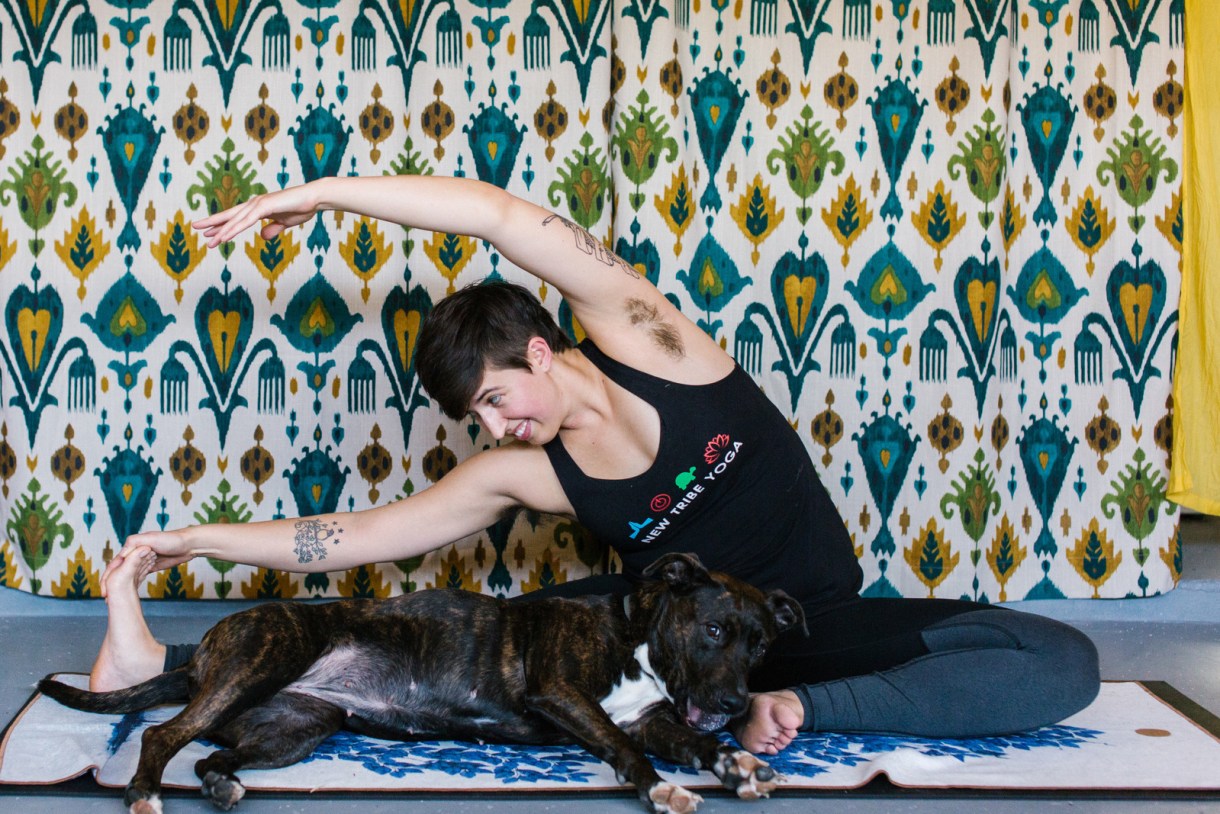 “Ziggy is the result of a classic bottoming out story where I ended a four year relationship, lost my job, needed to move halfway across the country to live with my grandmother, and decided it would be a good idea to get a puppy. I WAS SO RIGHT. I adopter her when she was eight weeks old from Colorado Puppy Rescue in Denver, CO. Ziggy is short for ziggurat, which means “strong tower.” I knew I was going to need a strong tower in that crazy time of my life, and Zig has lived up to her name. Ziggy does not have her own Instagram but you can keep up with her adventures with the hashtag: #ziggythepittie.” 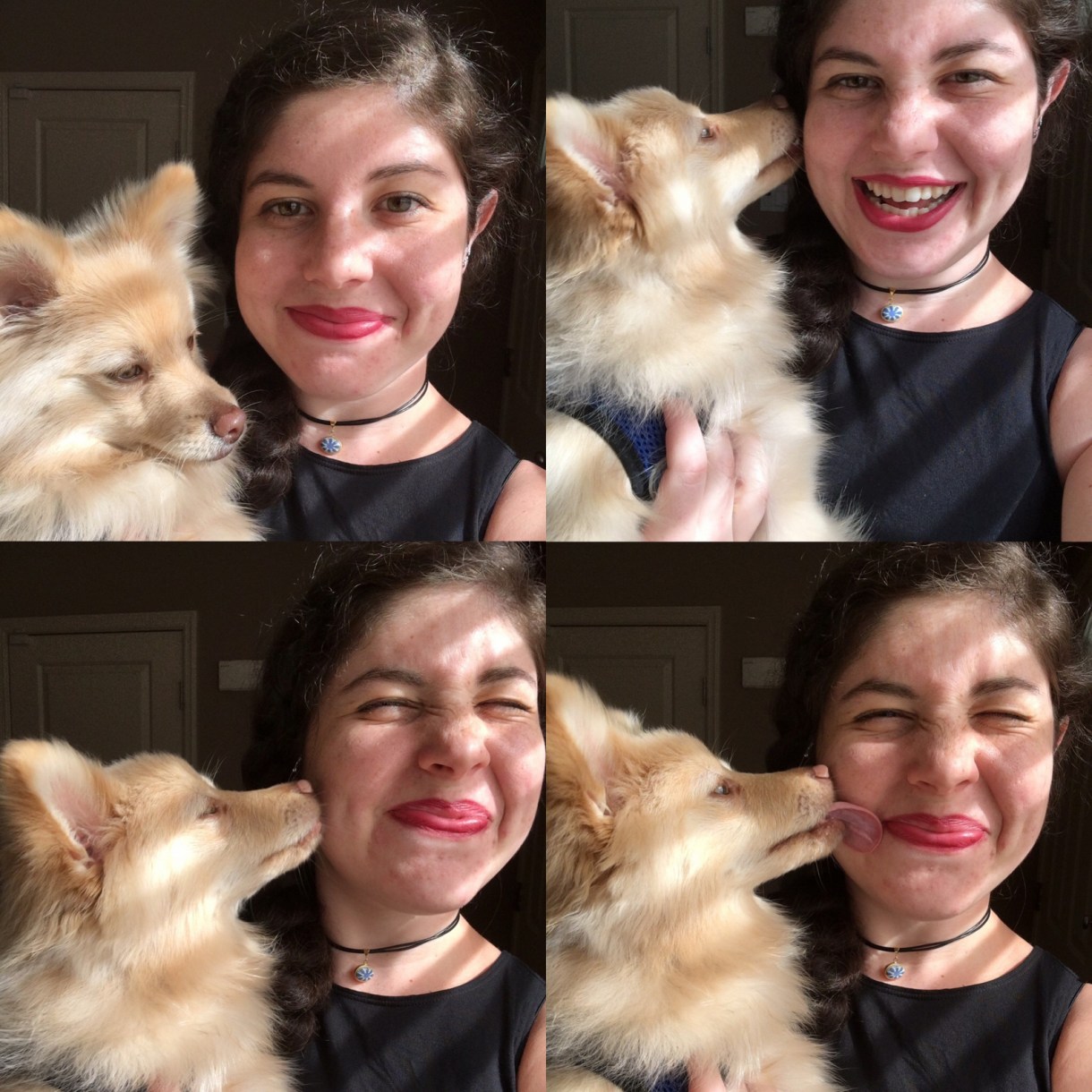 “Riley the pomeranian was adopted from a pitbull rescue. He came with his name and we couldn’t think of anything better, so we kept it. His favorite game is called Find It, where I put a piece of food on the ground and say “find it”, and then he finds it. It’s thrilling.” 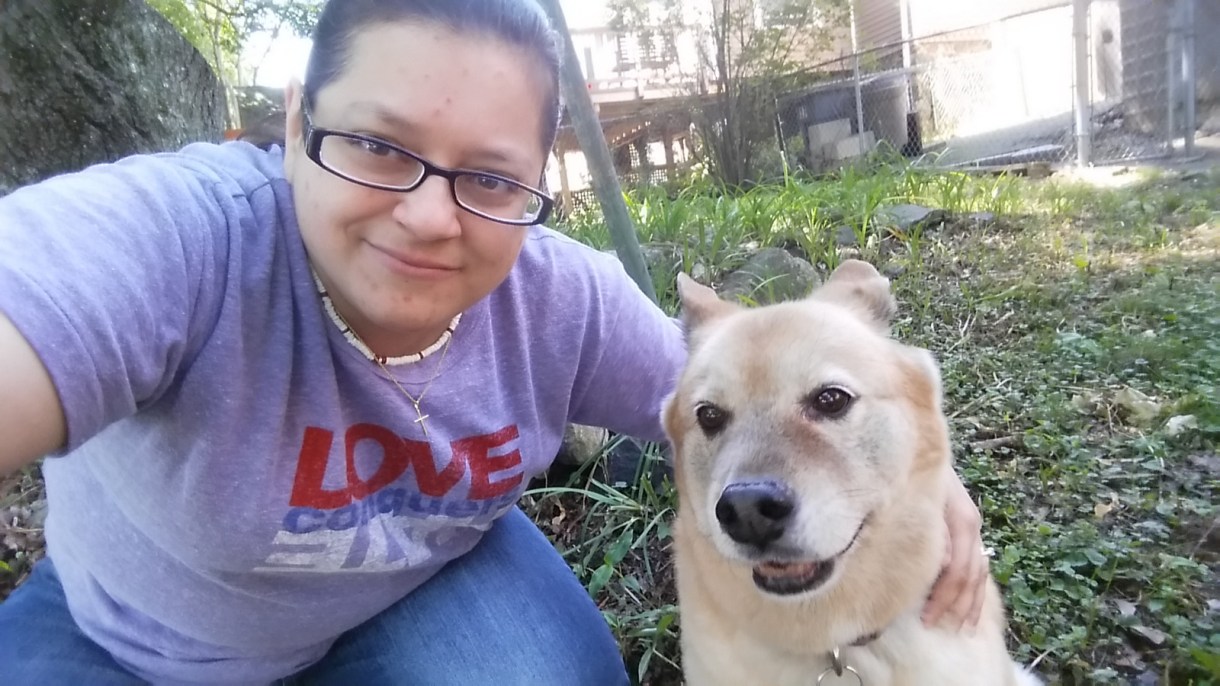 “Matti is a shelter pet. I went to the local animal shelter in Cleveland, TN (where I lived at the time) and I was looking specifically for a German Shepherd pup. It just so happens that they were bringing in a litter of shepherd puppies just as I arrived. They put them all in a cage with another random puppy. I wanted to do a quick look over the other cages before revisiting the shepherds. As I was walking back through the kennel I heard a puppy squalling and lo-and-behold if one of the shepherds wasn’t dragging this fluffball of a pup with a bent tail around by its ear. My heart said I had to rescue her so I took her instead of a shepherd.

I was seeing a girl at the time who reignited my interest in baseball cards and more specifically Don Mattingly, so we named her after him.
Matti is an amazing pup. She must have been a person in her other life because she is super smart and chill and thinks she is human. She has no interest in other animals. She just wants to chill with her peeps. She is getting old now and kind of acts like a senile old woman sometimes. She moves super slow in front of me like a retired Florida driver, she stares at me and ignores my requests, and she tends to do the opposite of what I ask her to do these days. Ex. Standing on the deck: “Go potty.” She looks at me, looks at the yard, looks at me. “Okay, come inside then.” She stares at me and then goes out into the yard.”