Caro and Artemis / 30, 4 months / Deep in the Woods in New Brunswick 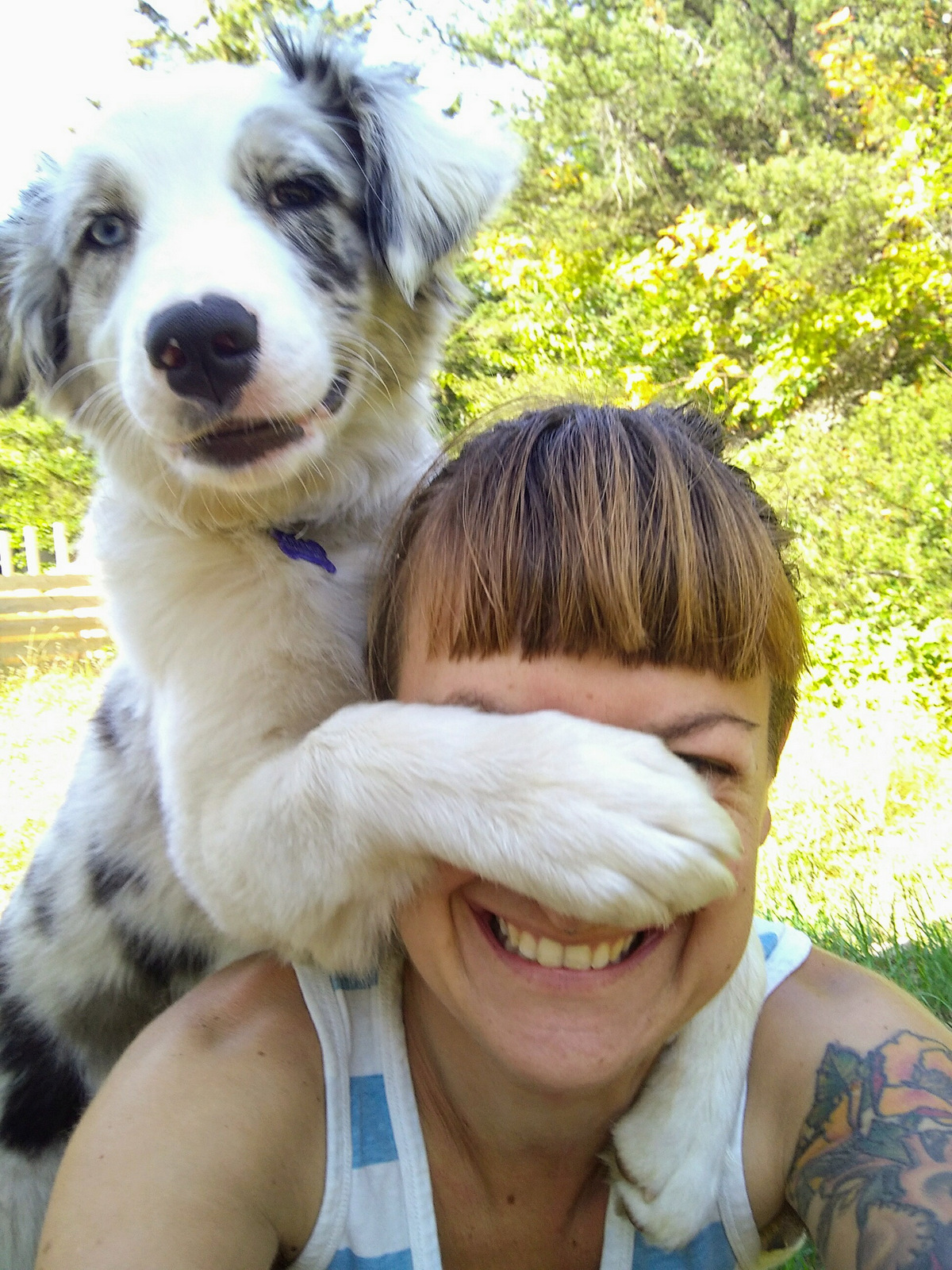 “Me and my playful pup, Artemis, spend our days running wild through the woods of New Brunswick watching out for bears and hunting mushrooms. She’s my most most favourite companion and does the cutest, hoppy bounces for balls and frisbees thrown into the field of wildflowers. We’re living our best life.” 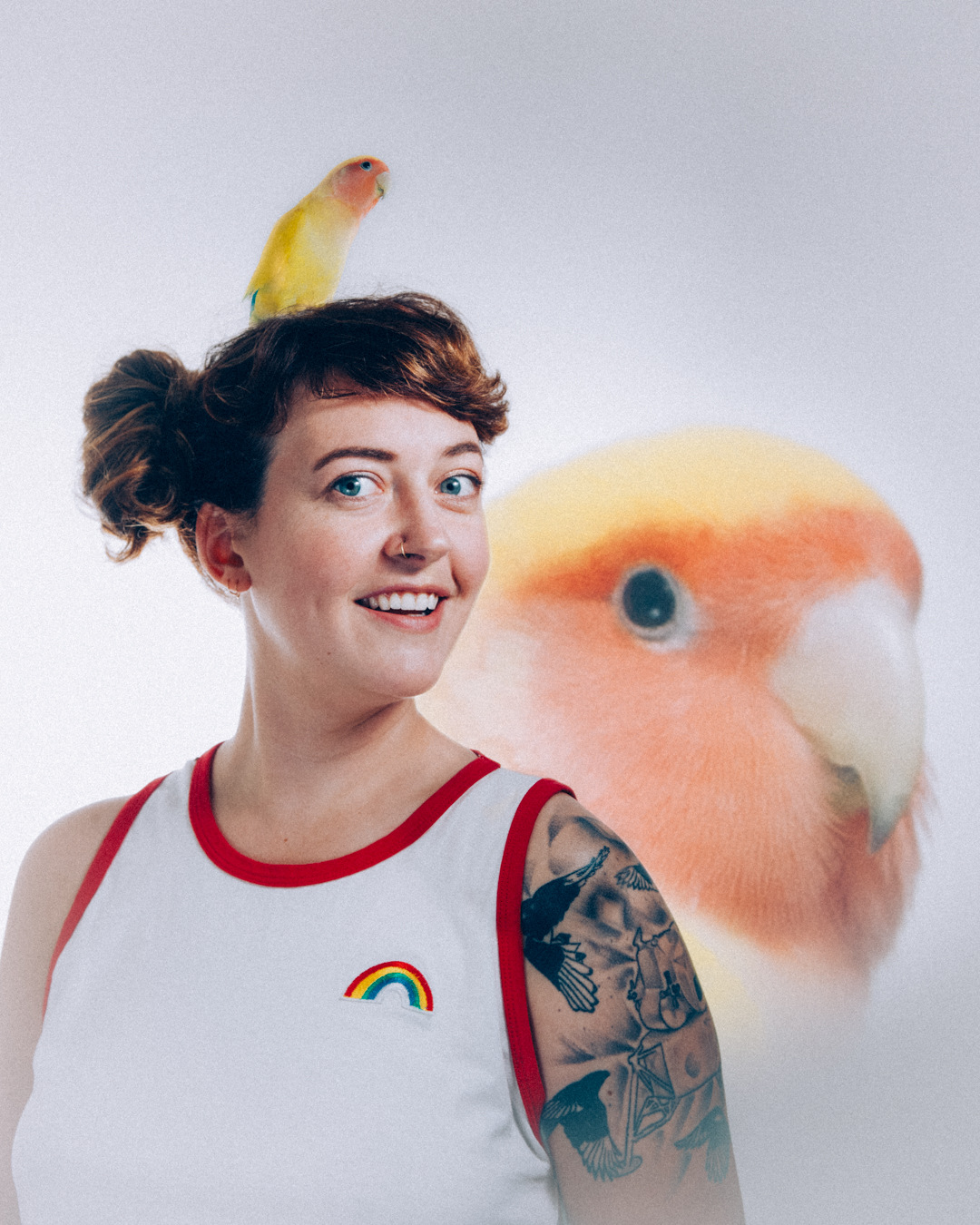 “I rescued Sammy from Candy Land in 2009 and he’s been promoting the homosexual agenda ever since. We’re pet photographers! No kidding! (He usually stays home.) Find us on Instagram: @woodardphotos.” 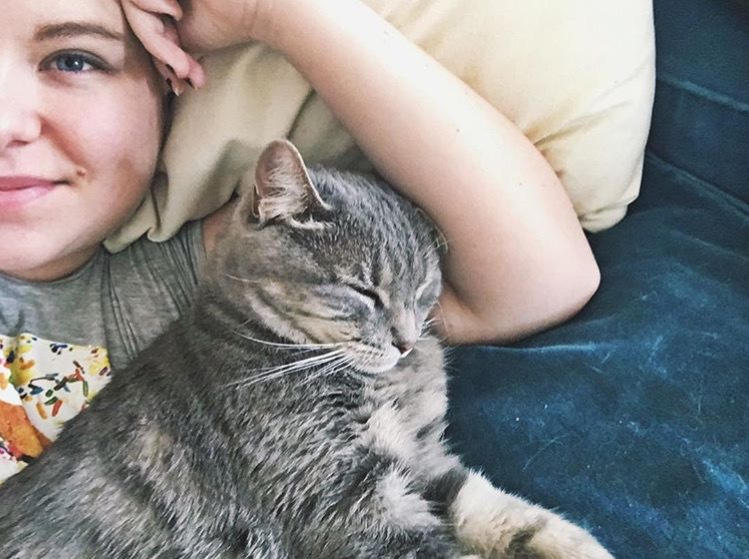 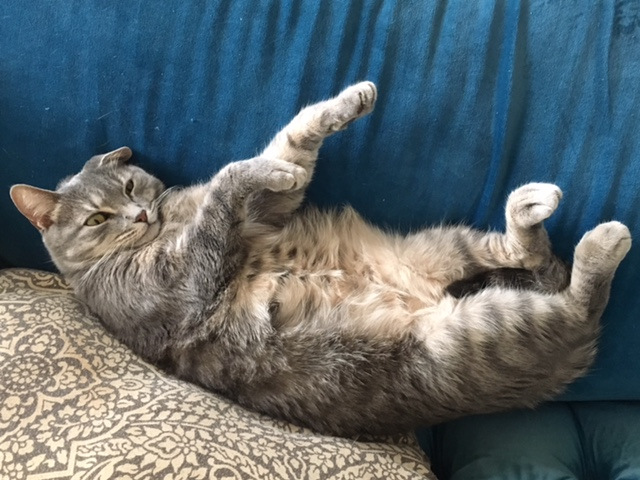 “The joke is that I conjured this snuggly noodle with my mind. One night I was about to head to bed when I heard a cat crying outside. I opened my front door and looked across the driveway to see a cat hunkered under a bush. I said “hi!” and she came right into my apartment. It was Thanksgiving weekend so I decided to call her Gravy. I figured she belonged to someone, but she had no chip and no one ever claimed her after lots of Found Cat posts and fliers! So, because I wanted a cat so badly, the universe sent me Gravy.

She’s just the best sweetest cat. She demands to be the little spoon, she comes when she’s called, lets me put my face in her belly, and makes super cute grumbly noises when she’s getting settled in bed. Her favorite things are chin scratches, getting to lick the can when I make tuna, and chattering at birds (but one time got over excited and jumped THROUGH a window screen to try to catch one, falling two stories. She was fine, I was traumatized.)
I don’t think she does anything weirder than the normal weird cat things, but she did one time bring a live bird into my room. She’s an indoor cat and all the windows have screens. Proof that cats go through portals. No Instagram but she does have a specific tag, #jeangravyboat.” 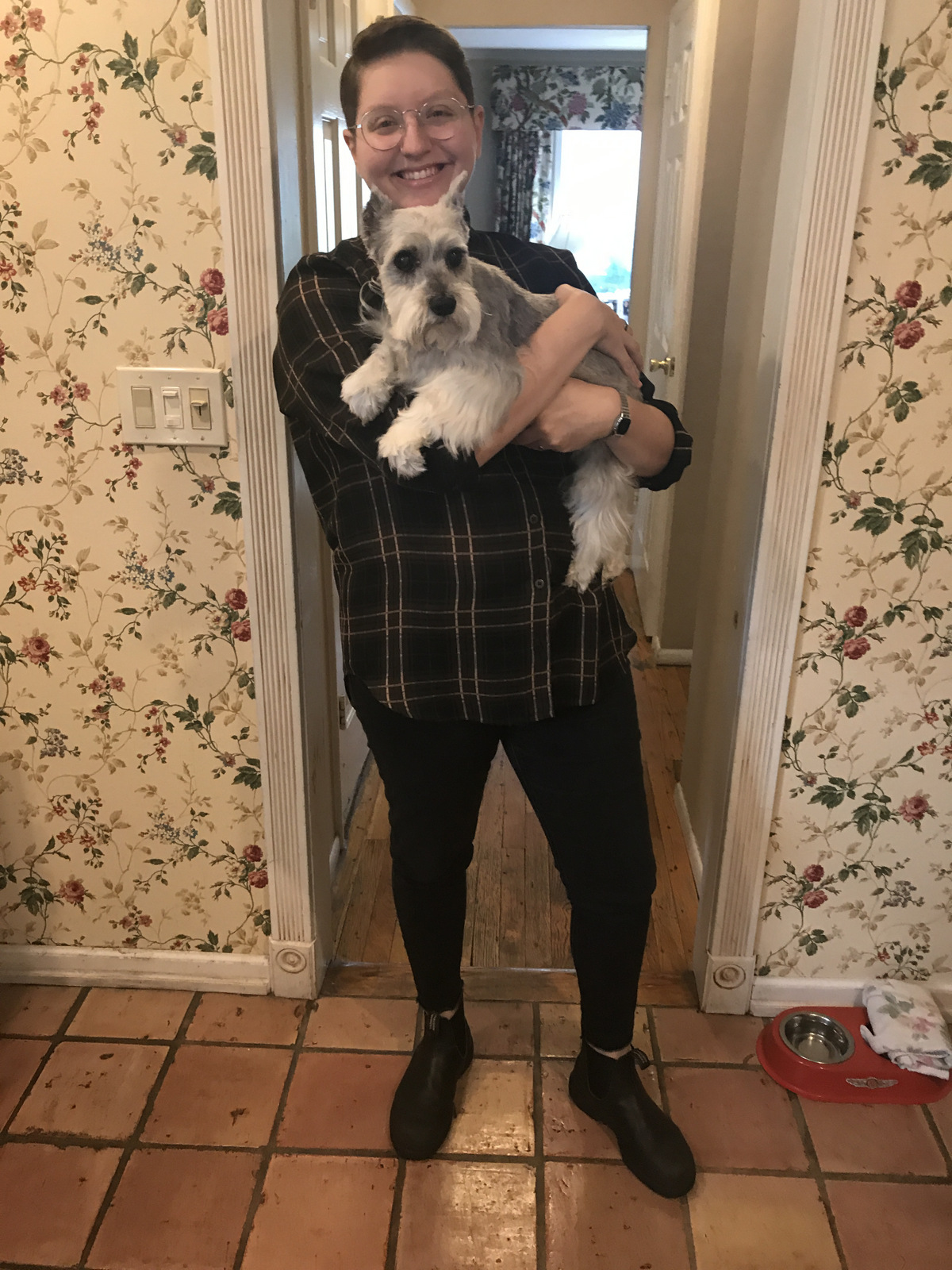 “Scarlett is your typical fierce femme from the Midwest who made her way to the big city. She’s a sadgrrrl who doesn’t play well with others, but her face always lights up for some blueberries. We love playing fetch, snoozing, and watching The L Word together (in no particular order, of course).  Follow her on Instagram @scarletttheminischnauzer.” 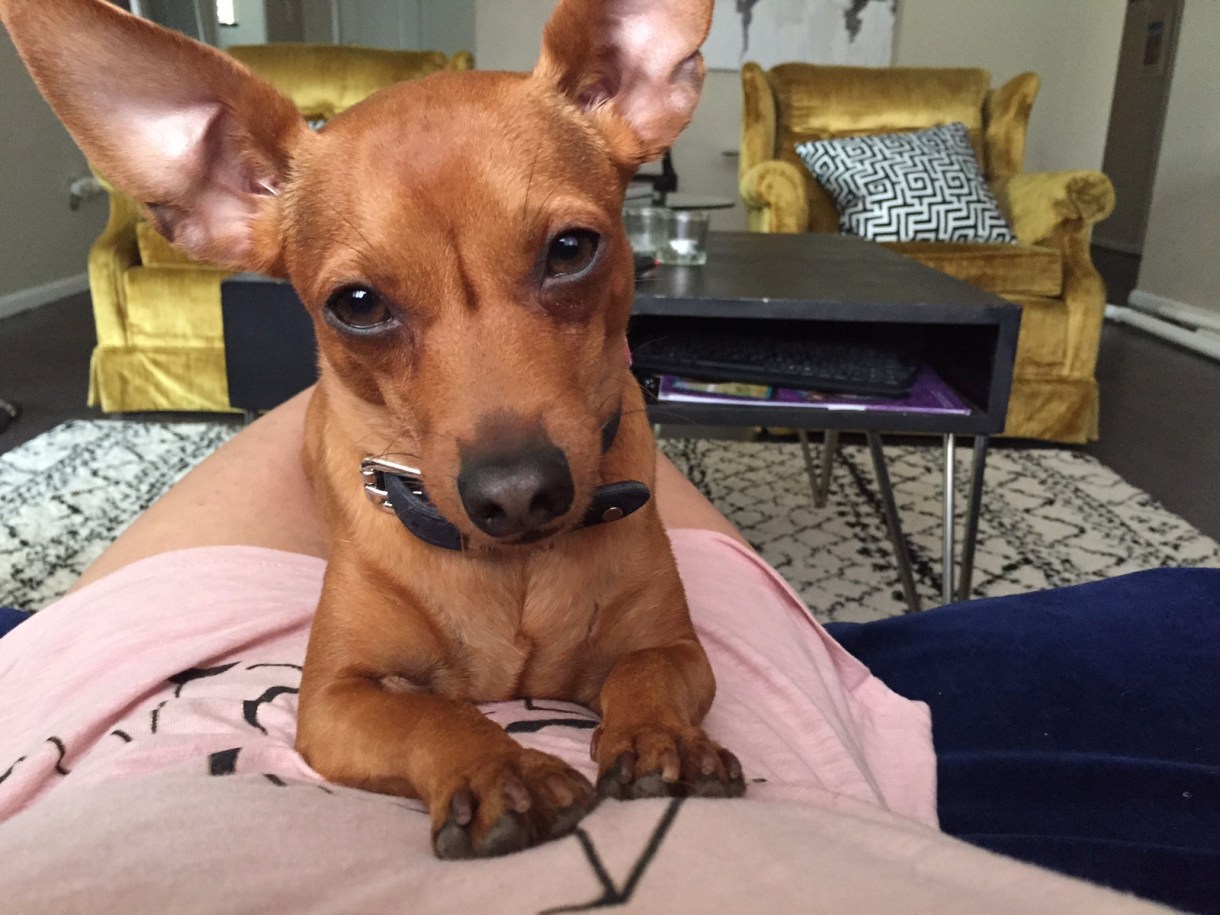 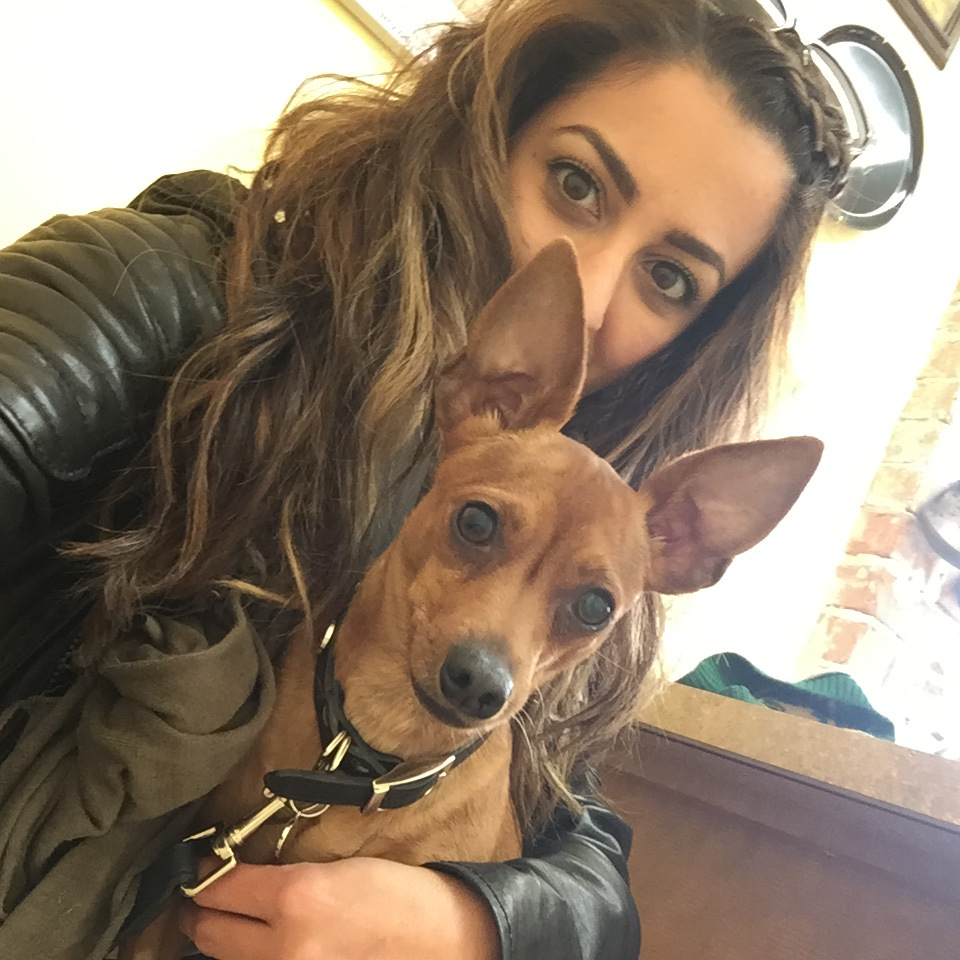 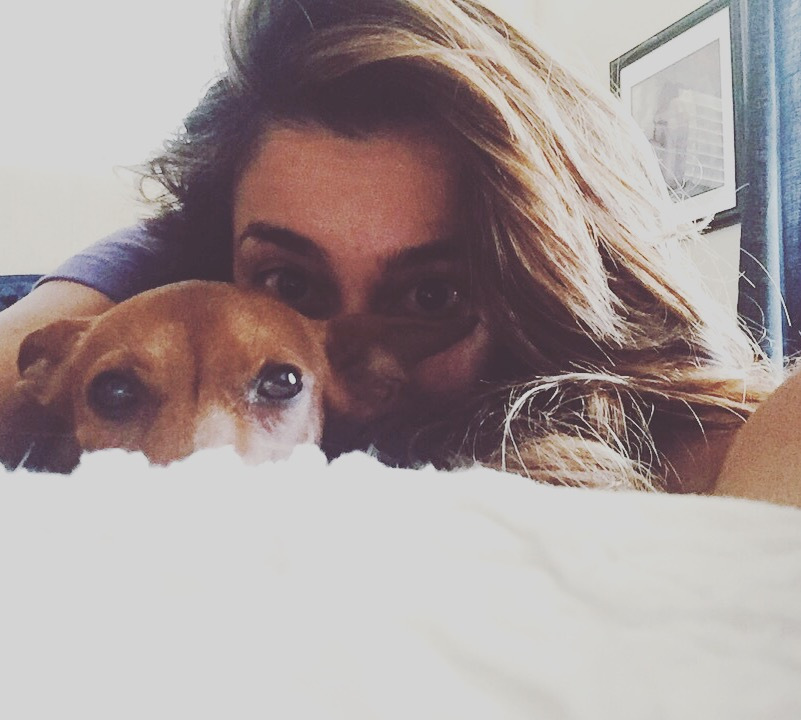 “My wife brought him home, at 9 months, as a foster and we never let him leave. Oscar was his given name… we just added Wilde. He is fearless, and always bossing our big dog Nash around. Oscar loves the dog park, walks to get coffee and sleeping in, burrowed under the covers. When he wants attention he will just stand on top of you and stare… deep into your eyes. If you ignore him he will paw at your chest and face and continue to stare. No Instagram, but #oscarwildethedog.” 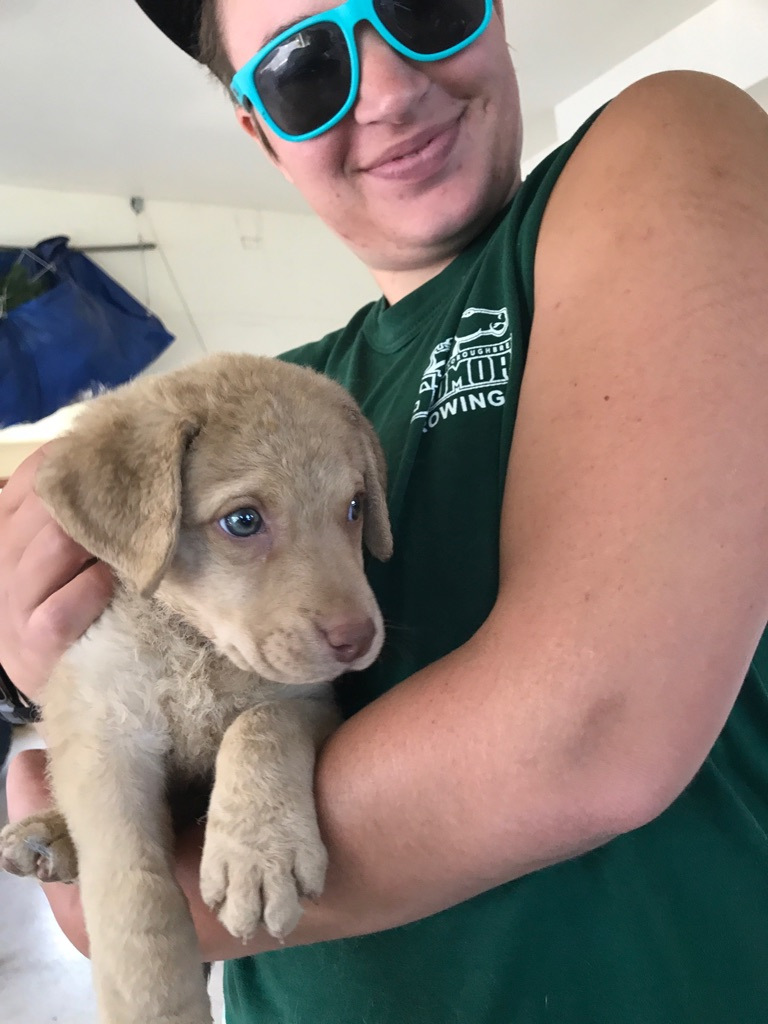 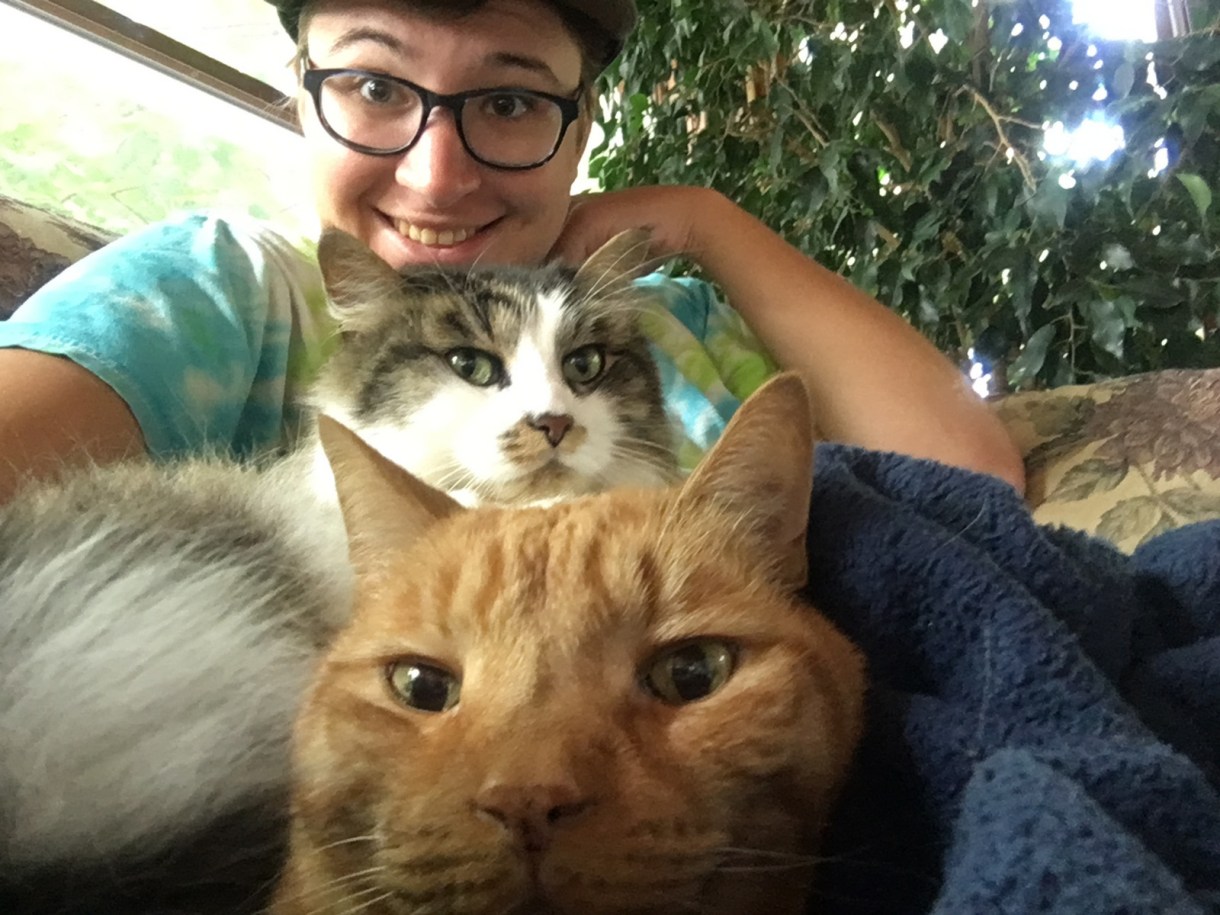 “Both cats are rescues that came into my life via my mom’s patients finding ~6-9 month old kittens that had been dropped off in the vicinity of their farms.  Paw’s full name is Firepaw because I was 10 and very into the Warrior Cat series. Win’s full name is Winston because we were told we had a male kitten and with the floof and the person we got her from being a dog breeder we figured we didn’t need to check ourselves…until our “male” cat went into heat. She’s earned the name Little Shit because she is an escape artist of an indoor cat, she’s a small cat despite the floof, and when the indoor cat escapes you have the tendency to yell “SHIT!” as her floofy butt scoots by you out the door and across the lawn. I think it’s important to note that they don’t normally get along AT ALL but after I was gone for a long weekend they missed me so much Win had to sit on top of Paw so they could both be near me at the same time (she’s a little jealous and possessive while Paw is an indiscriminate lap-sitter).

I’m not 100% solid on Theoden’s name right now because I have not brought him home as of writing this BUT I’m pretty sure that’s what I’m going to go with so long as I can find a decent adjective to go with “King” for his Official Breed Papers since Theoden is a word for king in one of the many conlangs of Tolkien and it’s a character that I 1. like 2. know the conlang translation off the top of my head 3. the name isn’t an insult (sorry Faramir you might be my favorite but I can’t put “Sufficient Jewel” on any official record because that is just BAD FORM DENETHOR and you just don’t do things like that, jeez). As you can probably guess I am a gigantic nerd who grew up on Tolkien (though several Star Trek names were up for consideration too).  He will hopefully have the temperament and brains to become a service dog doing some mobility work and medical alert and/or response (since the alerts I’m hoping for are generally natural alerts and difficult to impossible to train) for me.” 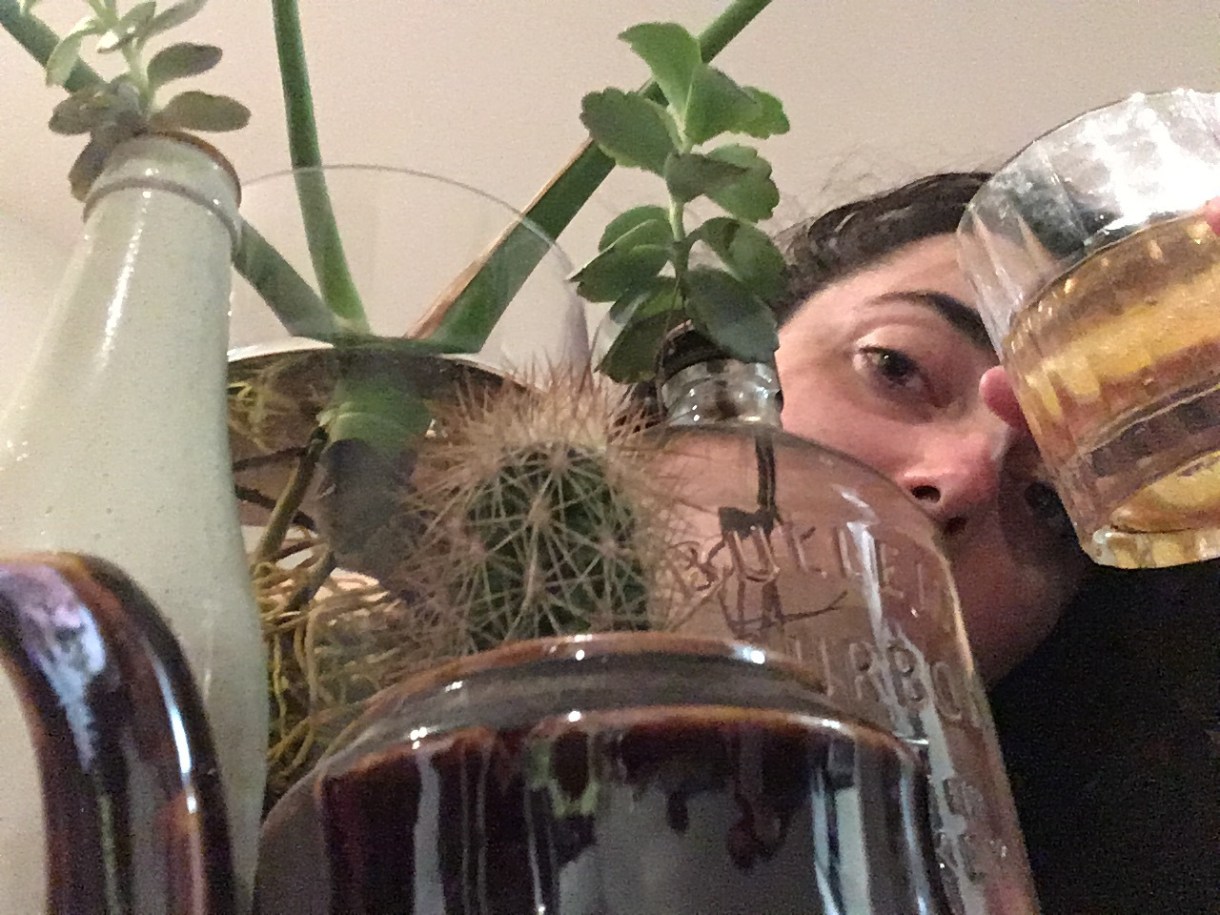 “I stole Alfoe (Alien Foetus) under the cover of darkness from a council-owned cliff, and he has grown happily in water ever since. He’s a beautiful little man, and is complemented by the unnamed plants that gather around him.” 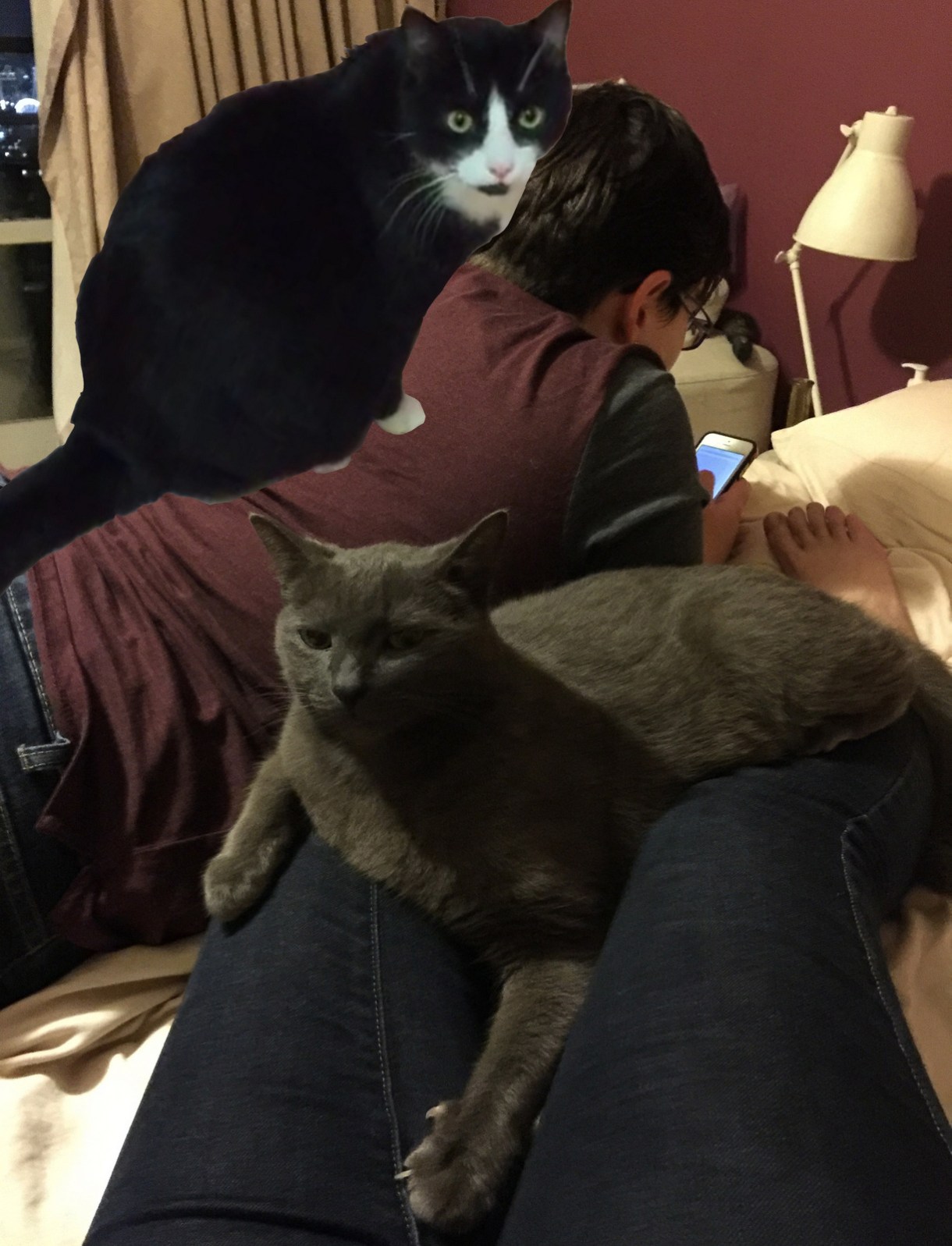 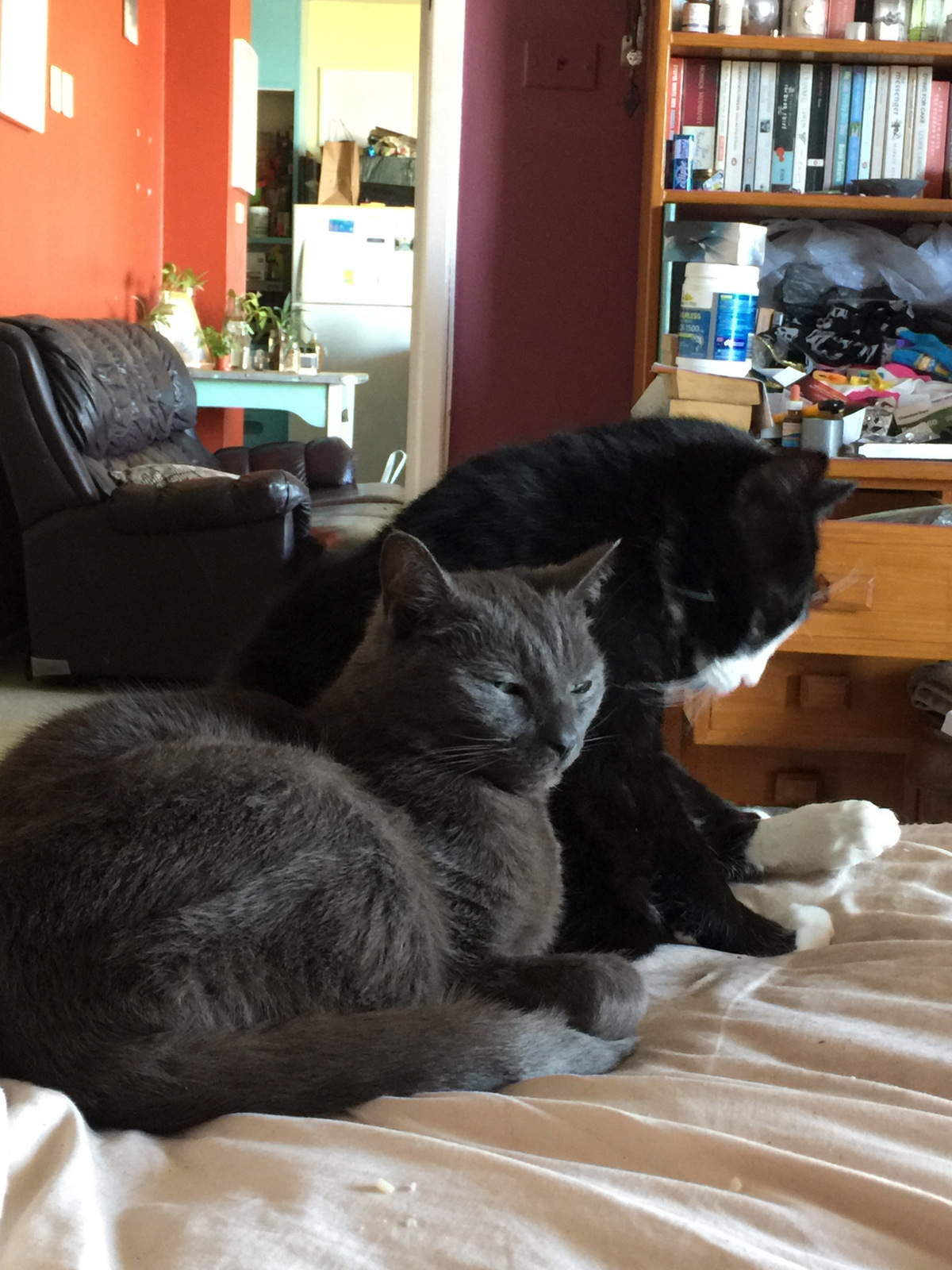 “We only had one photo with 3 of us and had to photoshop in Little Cat. Breemer (grey) enjoys cuddles and sunbathing. Little Cat (black/white) enjoys stealing Breemer’s food and belly scratches.” 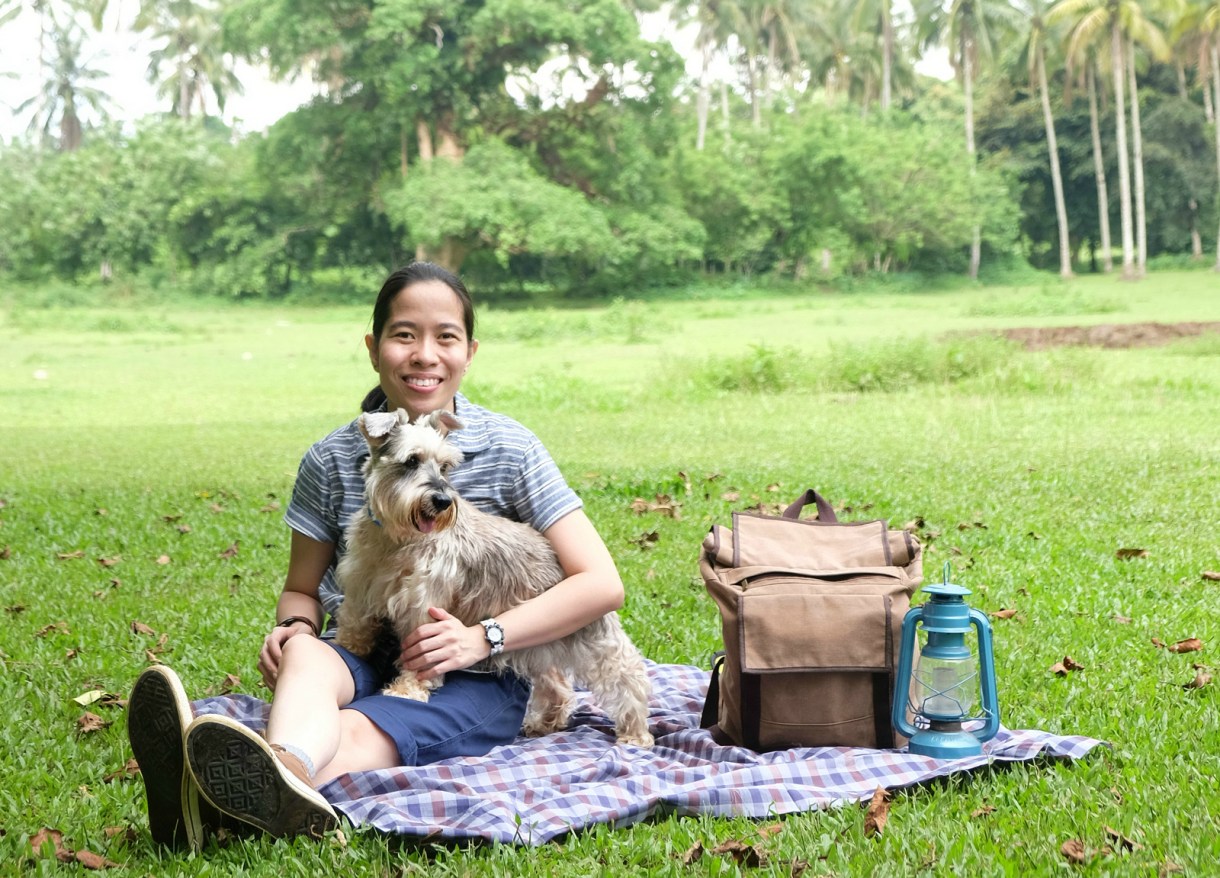 “An eight year old Mischka came to our home with a bag full of her stuff. She was being passed around amongst relatives of my cousin’s best friend because of her barking and clinginess. That was almost five years ago. What started as an over the weekend “free trial” kind of arrangement turned out to be the best thing I ever signed up for! I’ve always wanted to adopt a dog, I just didn’t expect it to be a lovable, sweet potato obsessed, Mini Schnauzer, who is my shadow.” 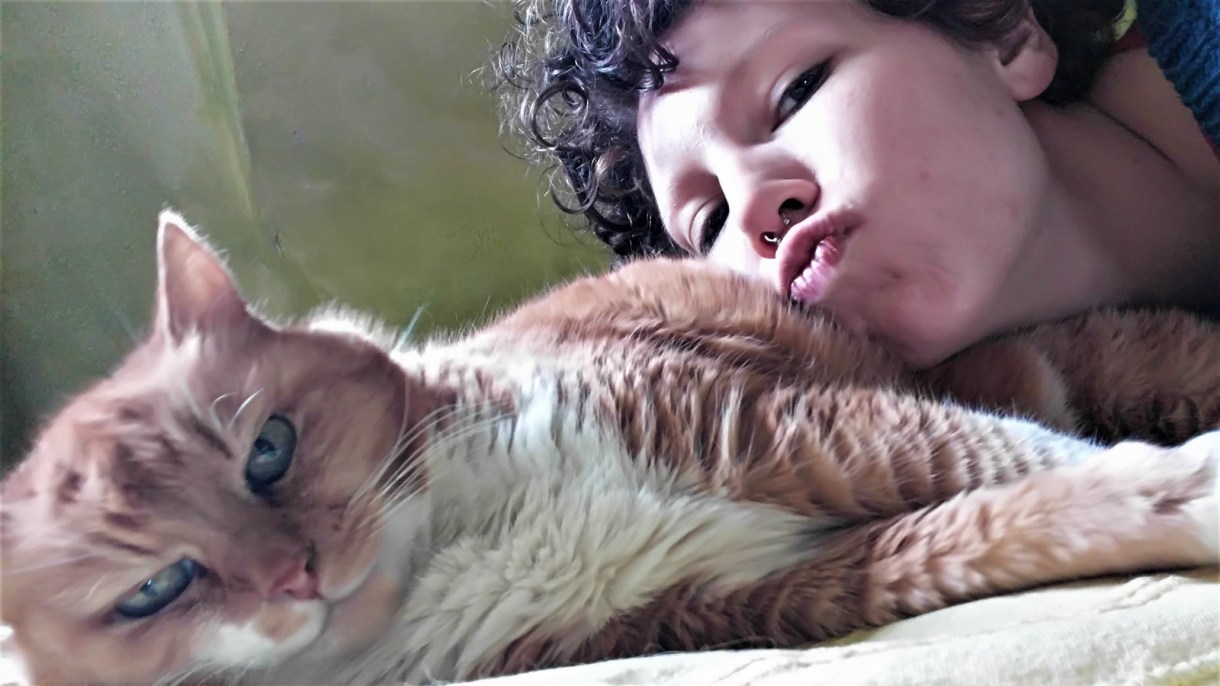 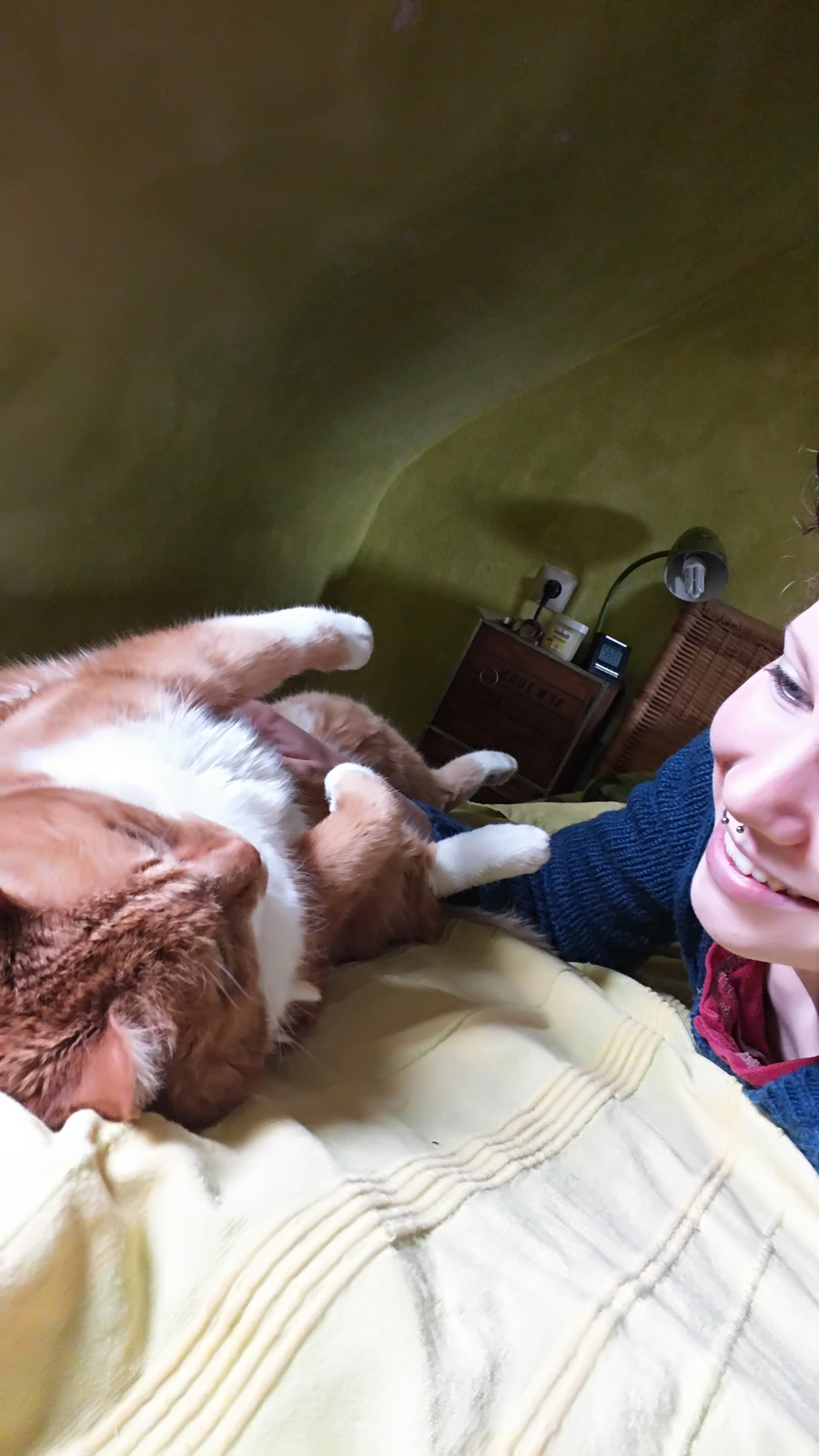 “I got this beautiful fierce cat for my sixth birthday. It was love at first sight. She was SOOO small. At breakfast, she would always choose me or one of my parents to climb onto the chair via human leg. It was painful and cute at the same time. Her name is NOT inspired by the Black Eyed Peas singer, they didn’t even exist back then (although Fergie the singer is nice too). She was named after Duchess Fergie who nobody knows anymore (because of her red hair). The name was obviously not my idea, but I still like it.

The best thing? So hard to say! I’ve learned a lot from her. I’m connected to her. I just love her so much! She is independent, wants to cuddle only when she decides to, knows how to persuade you to feed her, gets what she wants. She makes you understand her opinions on things through different meows and facial expressions. Don’t worry, she’ll let you know if she’s not pleased! But she’ll also let you know when she’s happy by laying on her back and purring, which will increase if you rub her belly with a foot (she accepts hands as well but feet are her true love). She is a fierce independent cat that don’t need no man. This is a relationship of total mutual trust and I’m scared of her nearing death, but so so happy to have this amazing creature in my life.”