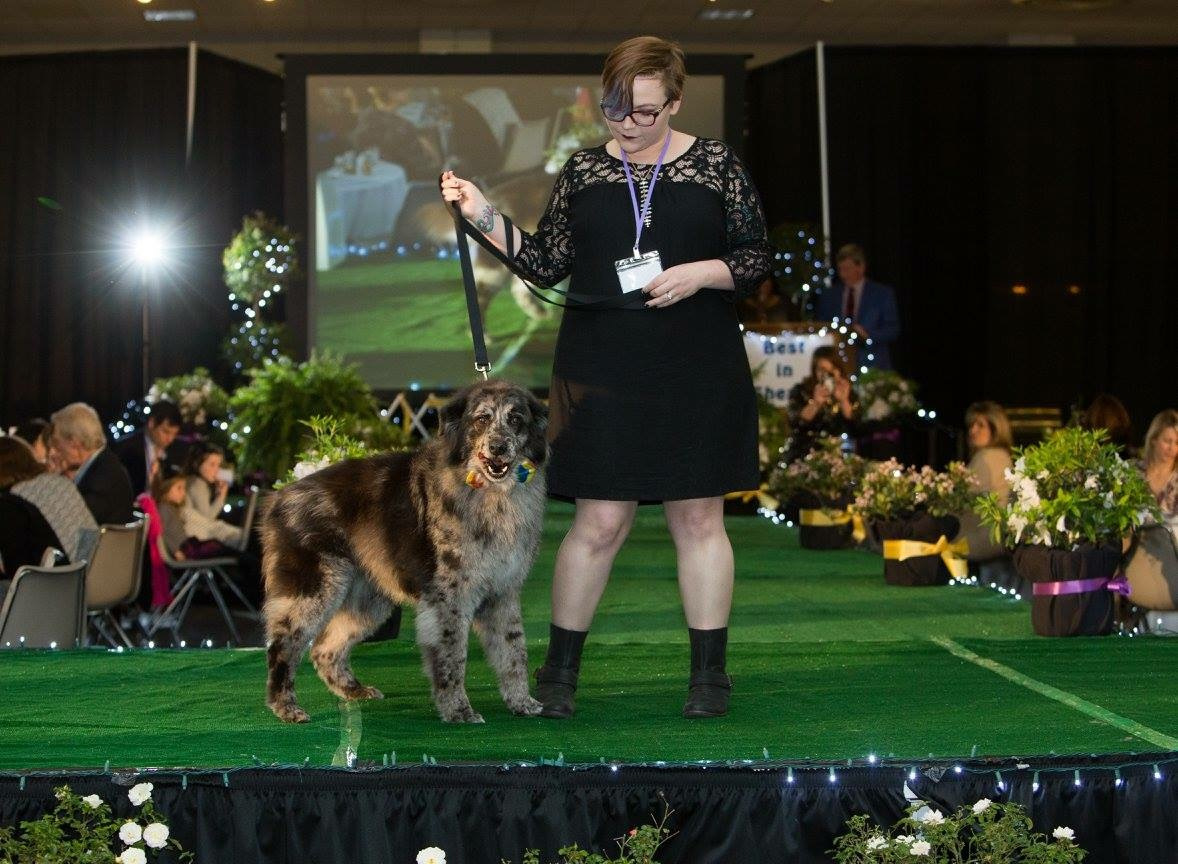 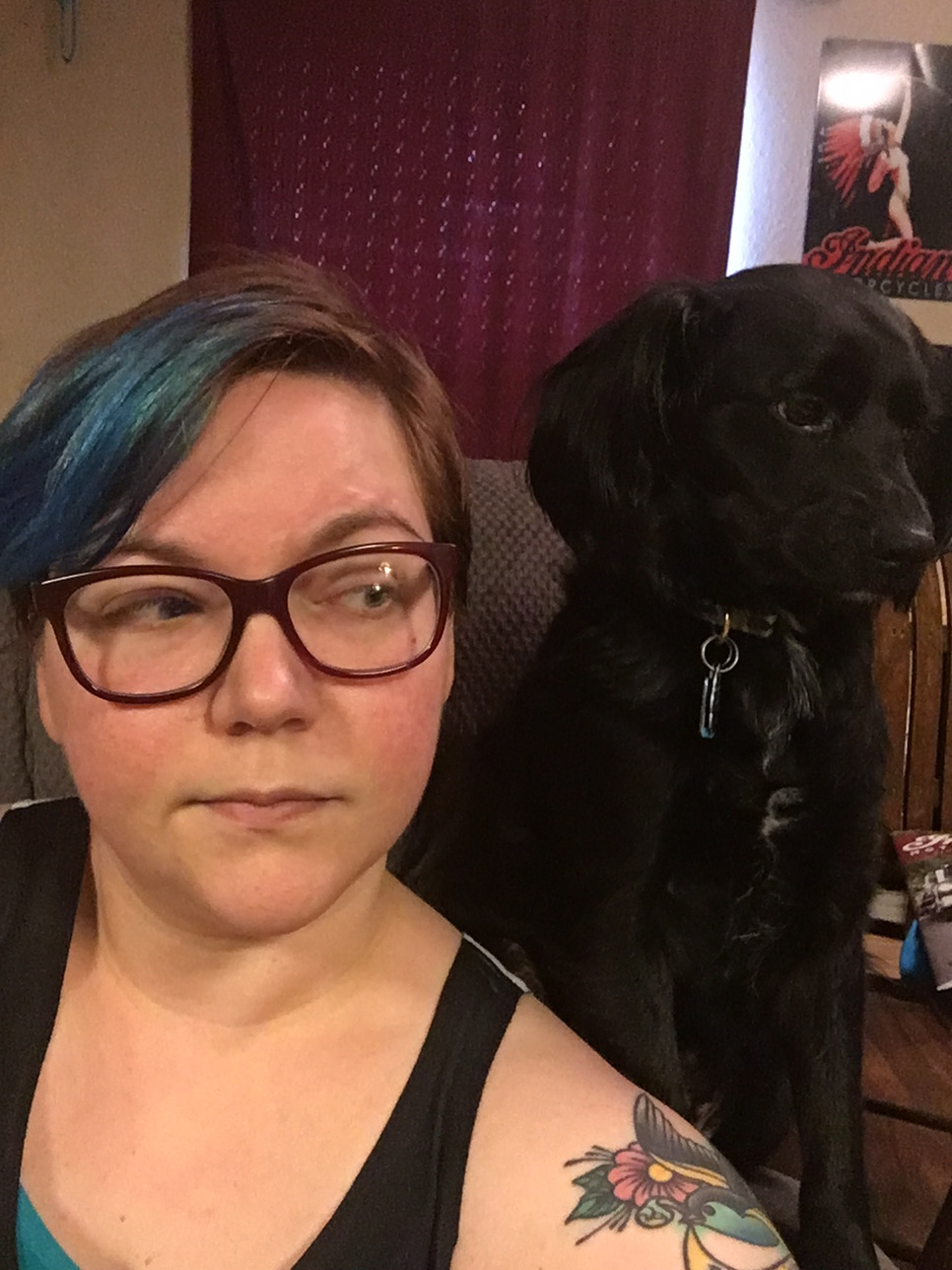 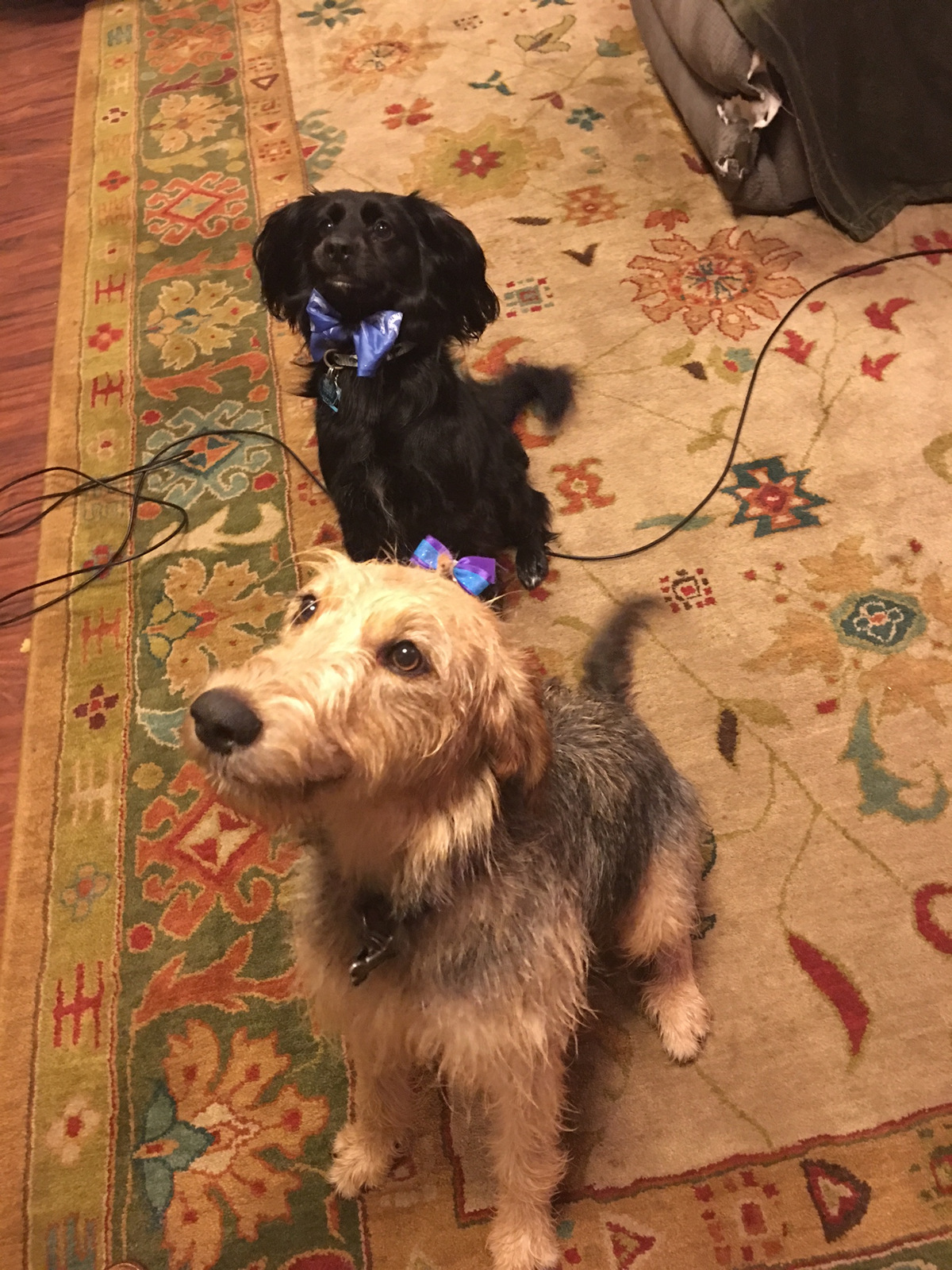 “Haywood and I were in a dog show for our local low-cost spay and neuter clinic. He is a rescue from Haywood County, NC and that’s where he got his name. He’s very large and very snuggly. Alfred Fraggle and I take a lot of selfies together. He has extremely fluffy ears and is a very glamorous boy.  Luna Fluffgood is the newest member of the family, and the only girl dog. She eats couches and other furniture on the regular but I still love her. She and Alfred Fraggle are best friends, and love to watch squirrels through the front window.” 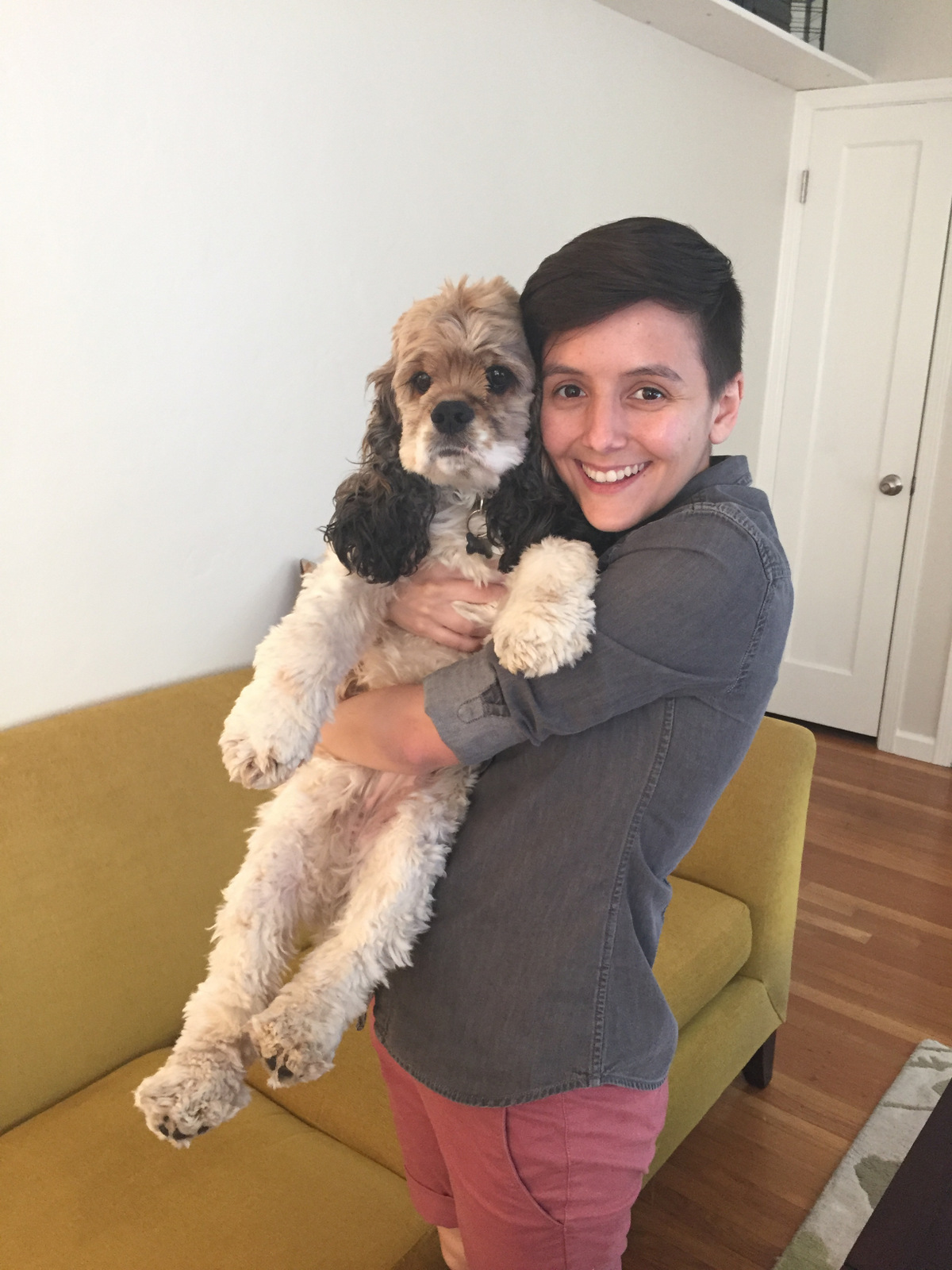 “We got Whiskey when she was a puppy in CT (we lived in Boston at the time). We named her after Whiskey in Dollhouse (she only ever wanted to be the best!) although now we just sound like alcoholics a lot. She’s a weirdo who likes to carry her first couple pieces of kibble and eat them over a carpet in another room before settling in for a meal, and she’s a great cuddler as long as you don’t steal her corner of the couch. (She’ll just stare at you sadly until you move).” 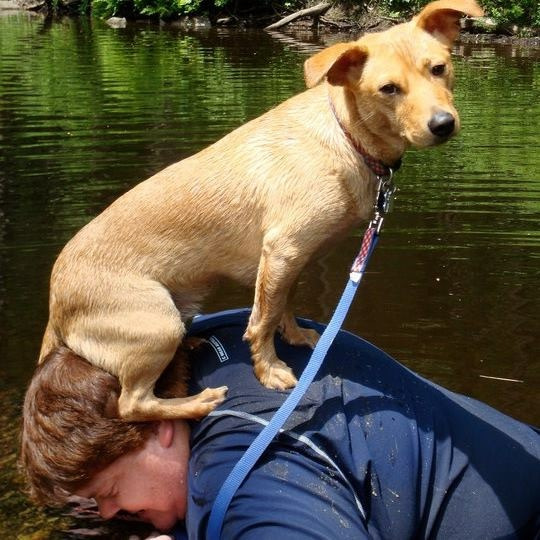 “HPR is originally from Tennessee. She and countless other doggo’s were transported to New England for adoptions. We initially went to see another dog but the other animal was not good with kitty cats, so unfortunately was no longer a viable option for our home. Just as we were leaving a Humane Society staffer stopped us at the door to inform us the vet just released 200 dogs for adoption. We walked around for what seemed like hours and I kept coming back to HPR.  She is literally the most loving creature I’ve ever come across in my life.  So gentle, so willing to please, so intelligent…
We do everything together. I work from home, we are rarely apart.  The one thing we don’t do together is swim. Turns out the dog is afraid of water.” 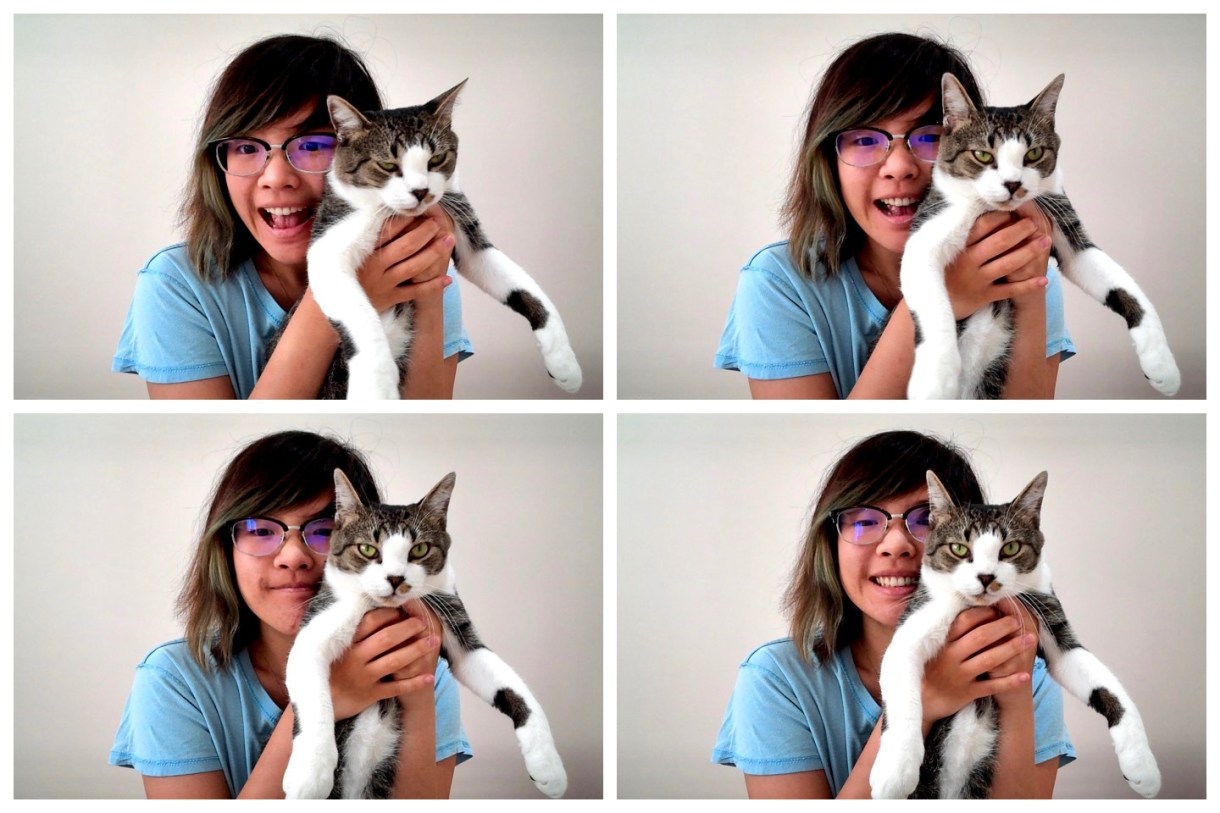 “Taro chose me at a rescue here in LA. I was doing a meet n’ greet with some other cats when he ran towards me and stole the treat in my hand. With that he stole my heart also. I wanted to name him something food related, and the name needs to be cute in Taiwanese, too, because I won’t allow my children to forget their roots (no pun intended). Taro / 芋仔 is basically a Taiwanese potato, and he’s a little potato for sure. He greets me at my bedroom door every morning! And he keeps me company every day as I work from home. I take him on walks on a leash, but it inevitably turns into him walking me, so really who’s the owner here? The weirdest thing he does is climb into my lap, fart, and then leave. The worst.” 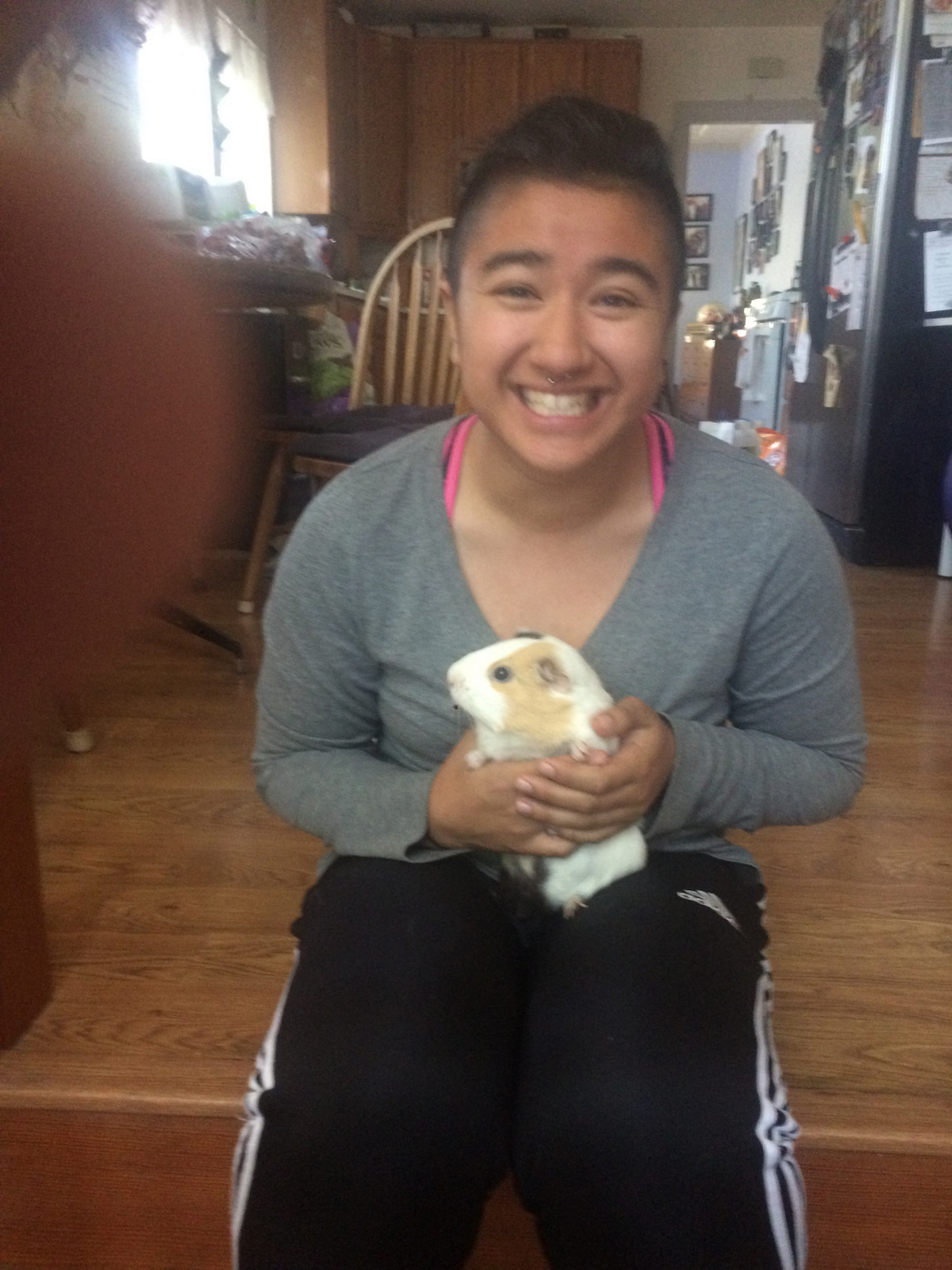 “Neo, short for Neopolitan, has the signature three swaths of color that are distinctive in the ice cream she is named after.  She and her companion, Bambi, are both primarily taken care of by my father, whose thumb makes an appearance in this photo as well. She loves carrots, but will very willingly stretch out over the side of her enclosure for whatever tidbit of veggie you offer her. I’ve done some cute sketches of her and Bambi, but mostly our interactions consist of her squeaking for treats and me giving in without much protest.” 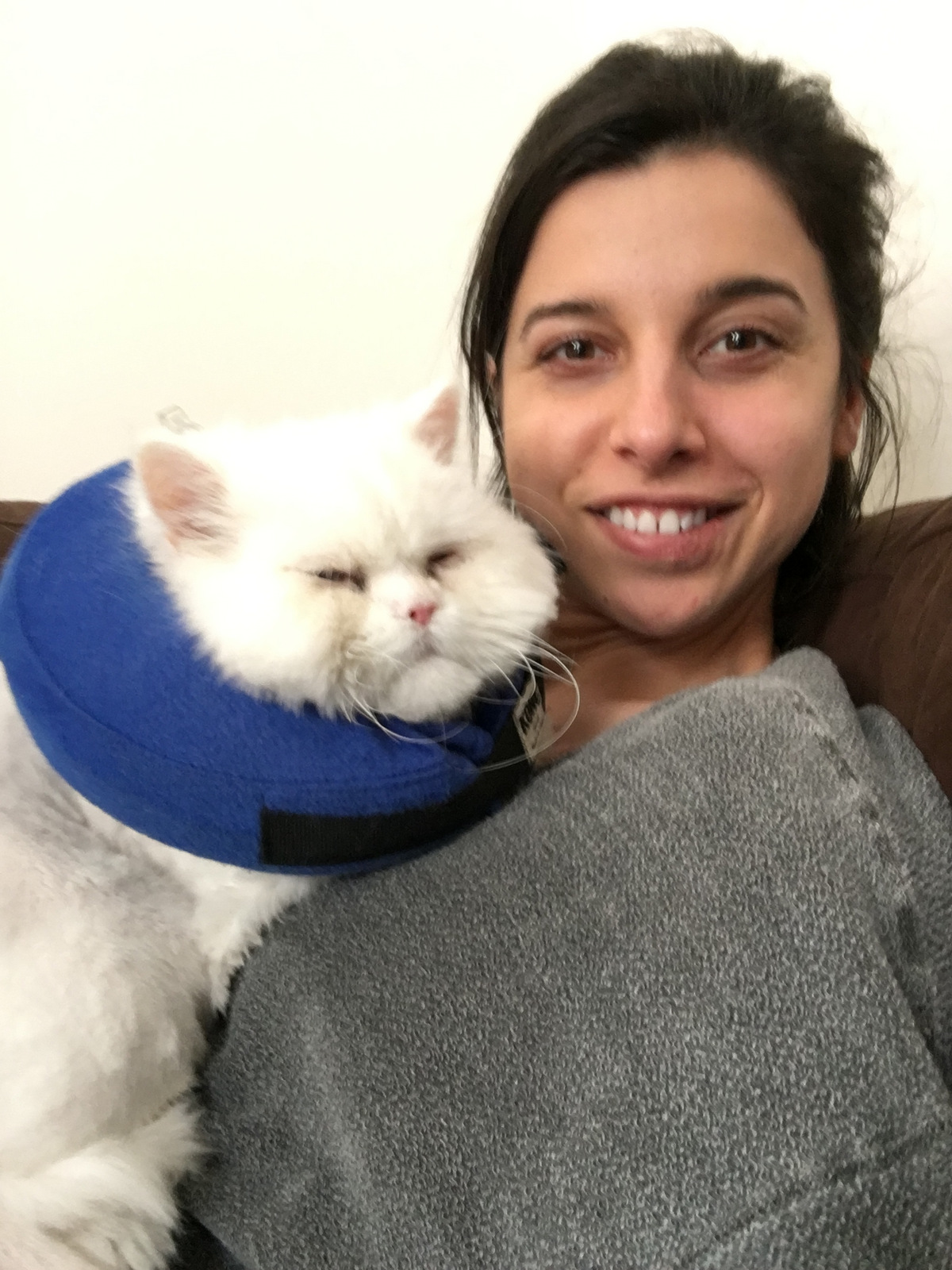 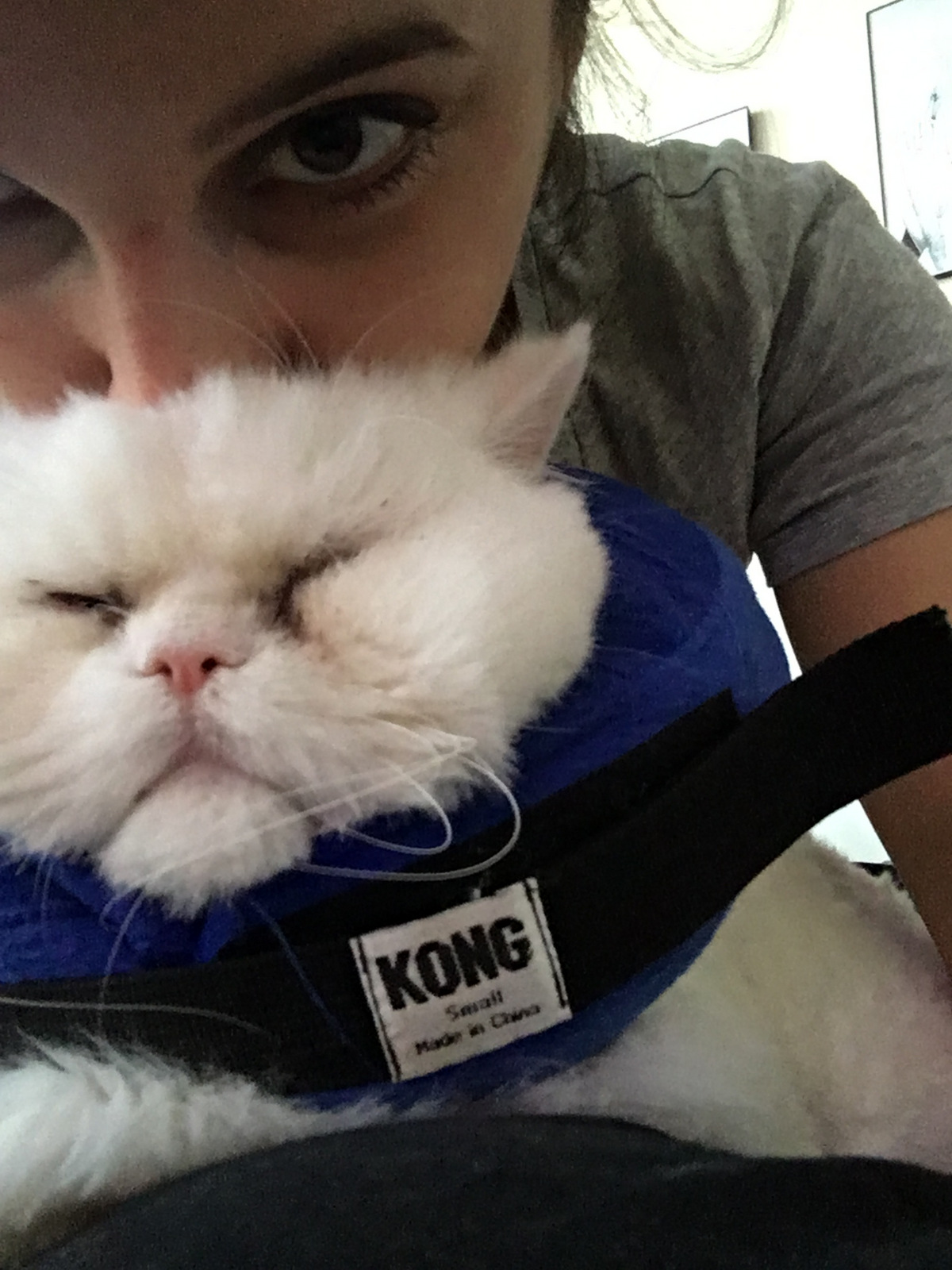 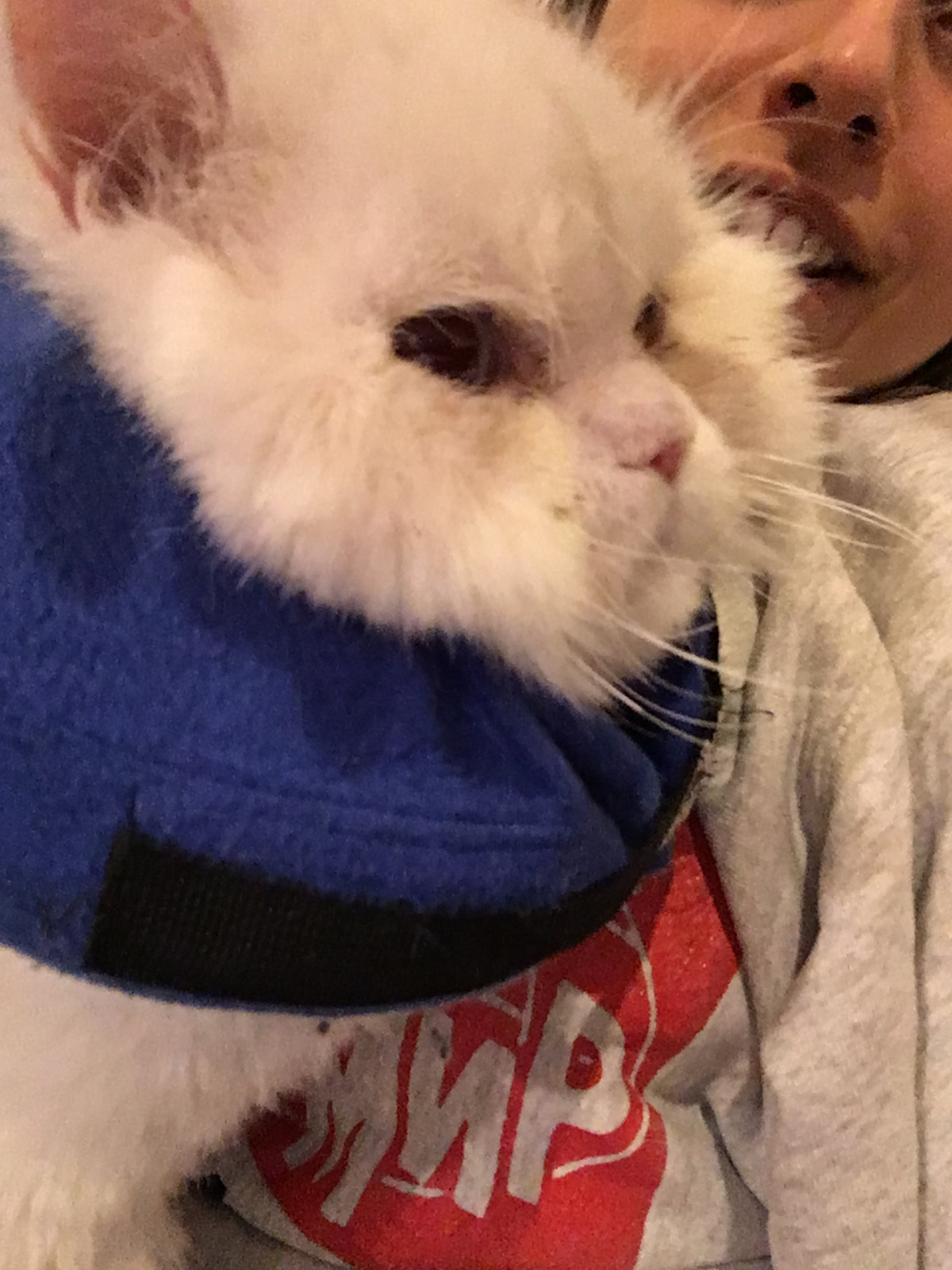 “I used to be one of those people who looked through Craigslist’s pet section to feel warm about the possibility of soft, furry critters in my home. When I stumbled across Oskar (formerly Madonna), possibility turned into NEEEEEED: I must have this baby! So I scooped him up and we became momma and momma’s boy pretty soon after. Poor punk had heart disease, as well as some allergy we could never figure out, hence the blue donut. He passed this spring after our spending only four years of our lives together. I’ll never forget his sweet sweet snuggles and soft paw reaches to touch my face at the most heartwarming moments. Such a good boy.” 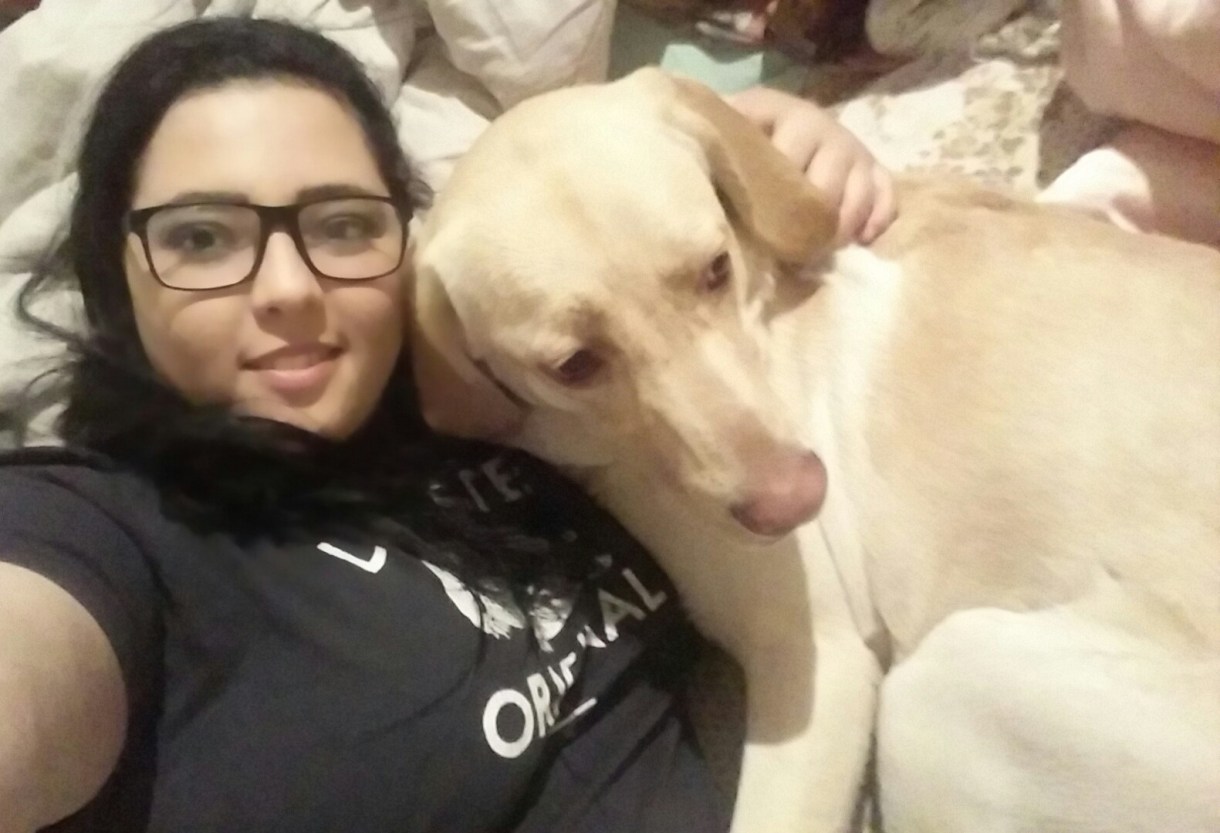 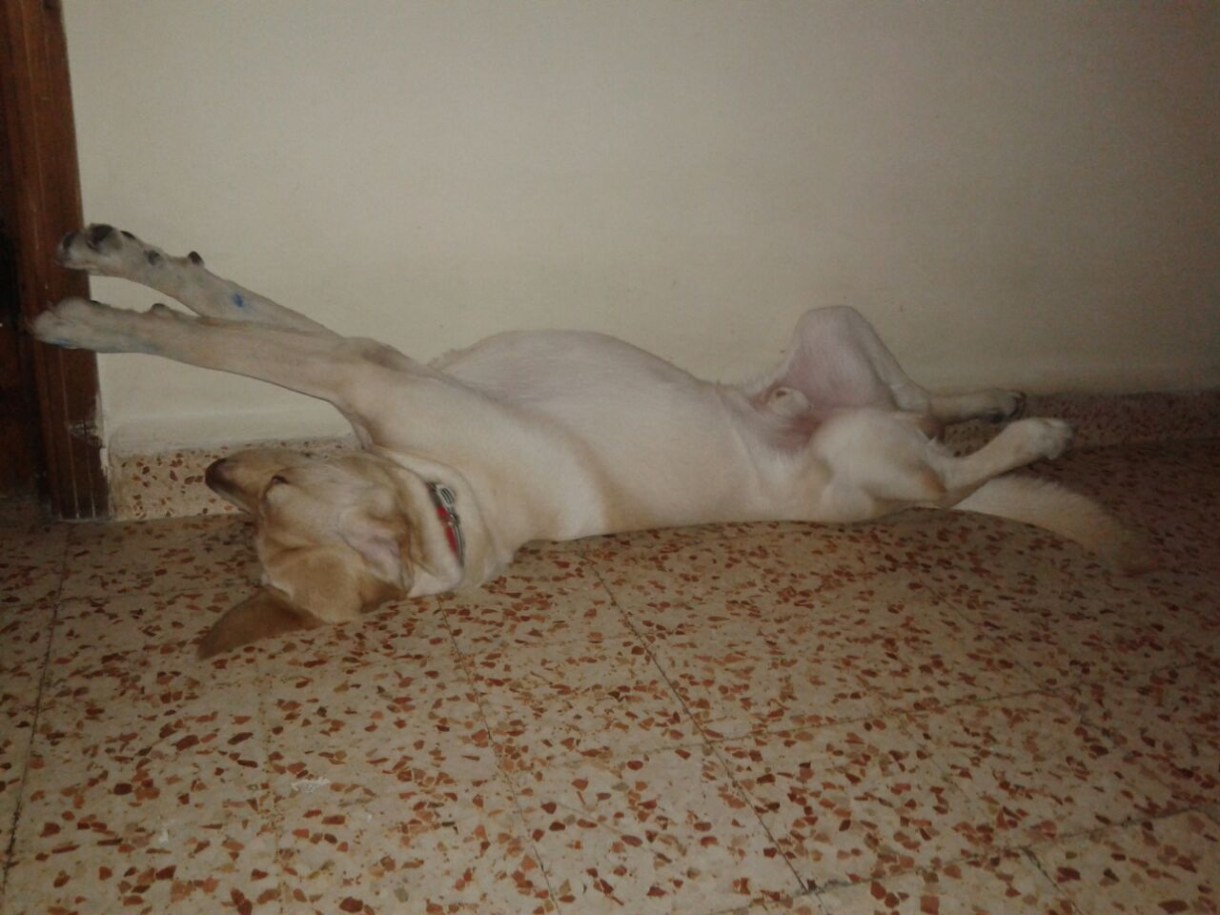 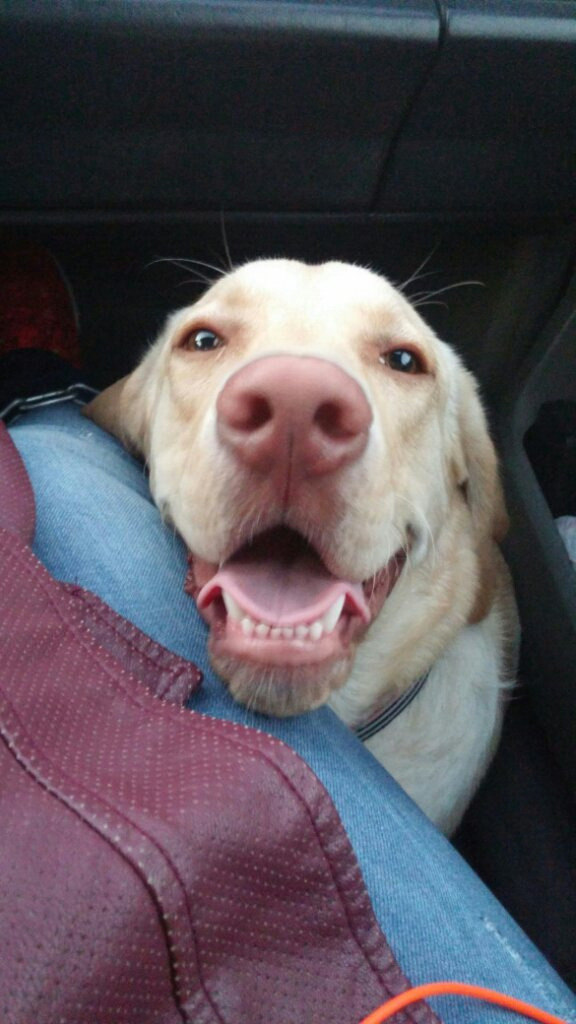 “Lucky was abandoned by his owner with a friend in a hangar, I had just lost another dog, Rex, and was crying for weeks until lucky came home one day. I had just gotten home from university and I fell in love with this tiny little blonde ball of fur. He was two months old the first time we met and we’ve been inseparable ever since. My mother calls me his momma because I coddle him so much. My brother adopted him for me and he was already named, and the name suits him so I never changed it. Lucky is very compassionate and loving, he has a sense of when I’m upset and never fails to put a smile on my face. When we have time, Lucky and I go running, or running around the garden in my hometown, or taking long swims on the beach and ruining my dad’s car because Lucky won’t let me dry him off. From the way he sleeps on his back with his paws extended to the way he pees, everything he does is weird but in the most lovable way.” 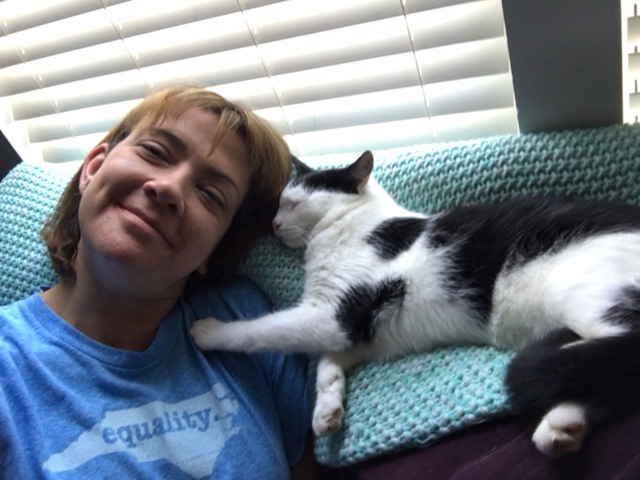 “I found Finn at the ASPCA though a pet finder website. He has a little black dot on his chin (which unfortunately you can’t see here) and when I saw his picture on the website I immediately fell in love. When I got to the shelter another woman was holding him and I waited for an hour for her to leave. Luckily she couldn’t make up her mind and he was mine! My favorite thing to do with Finn is cuddle on the couch but his favorite thing to do is bring live small animals into my house. There have been bugs, lizards, frogs, birds and snakes. He’s lucky he’s so darn cute! The weirdest thing he does is drink out of the faucet in the sink next to mine in the bathroom every morning while I’m getting ready. He’s a nut and I love him.” 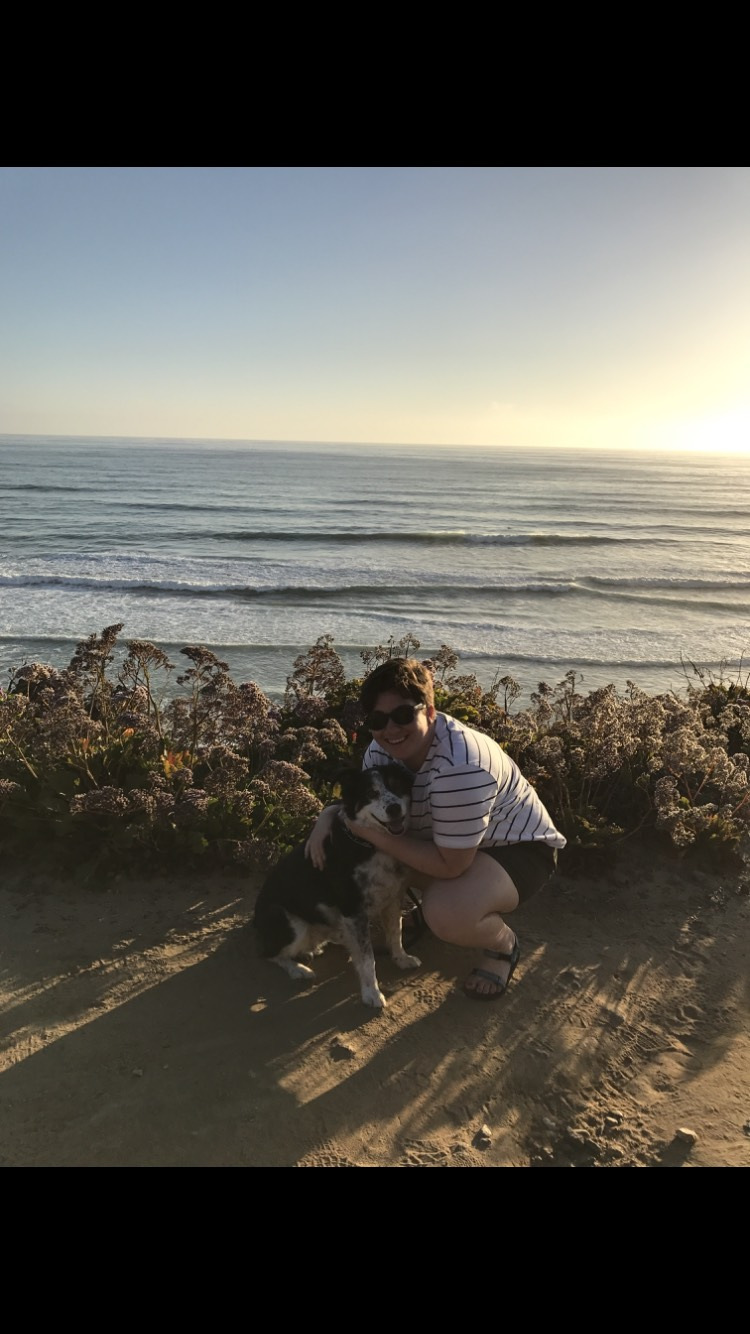 “We got Jake my freshman year of high school as a rescue! He came with his name and really just fit it. His previous owners bobbed his tail, so when he gets excited his whole back half wiggles. He and I have this in common. We like long walks on the beach, belly rubs (yes, both of us), and snuggles. Jake is convinced he is a lap dog, and does not understand why he cannot sit on top of you at all times.” 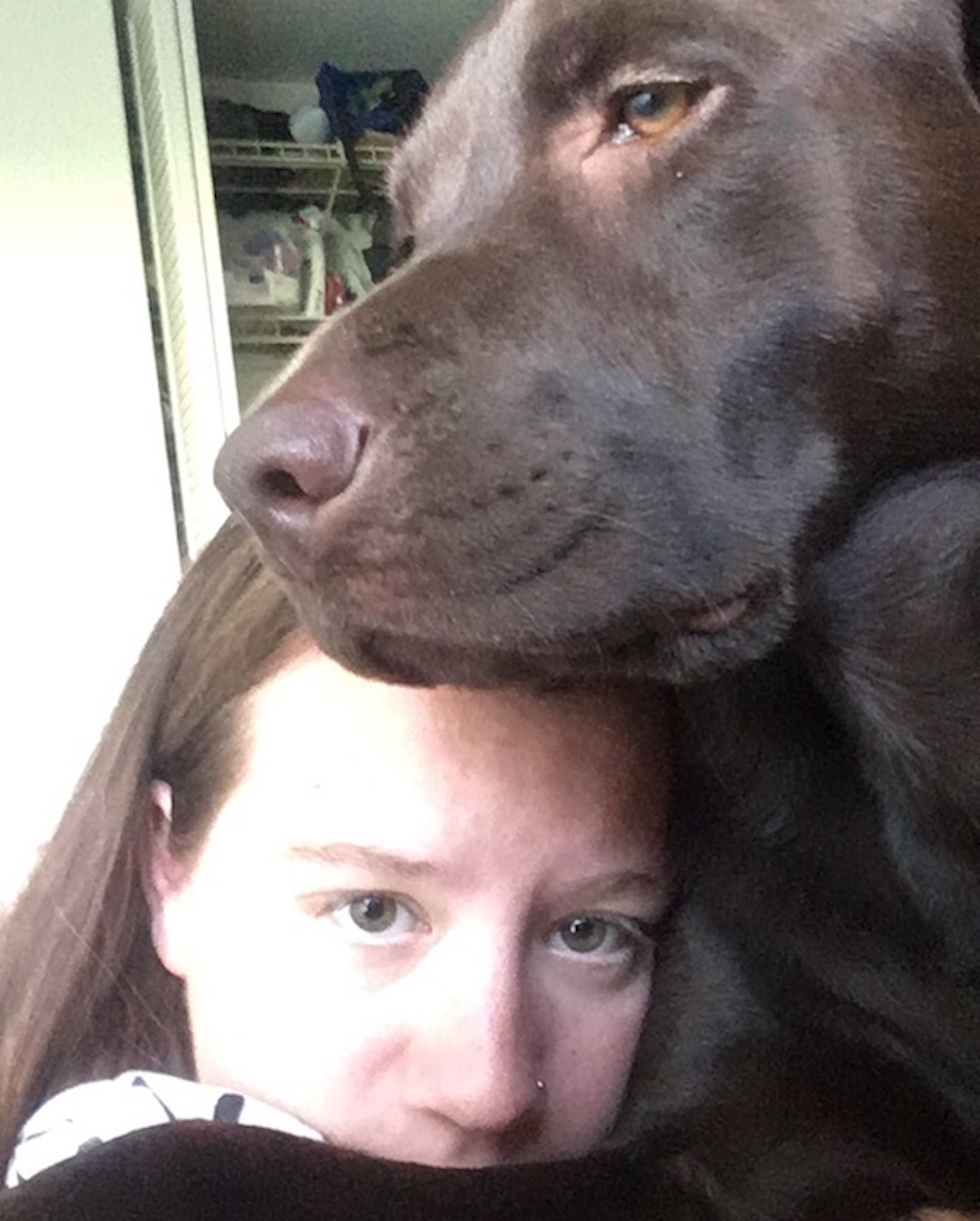 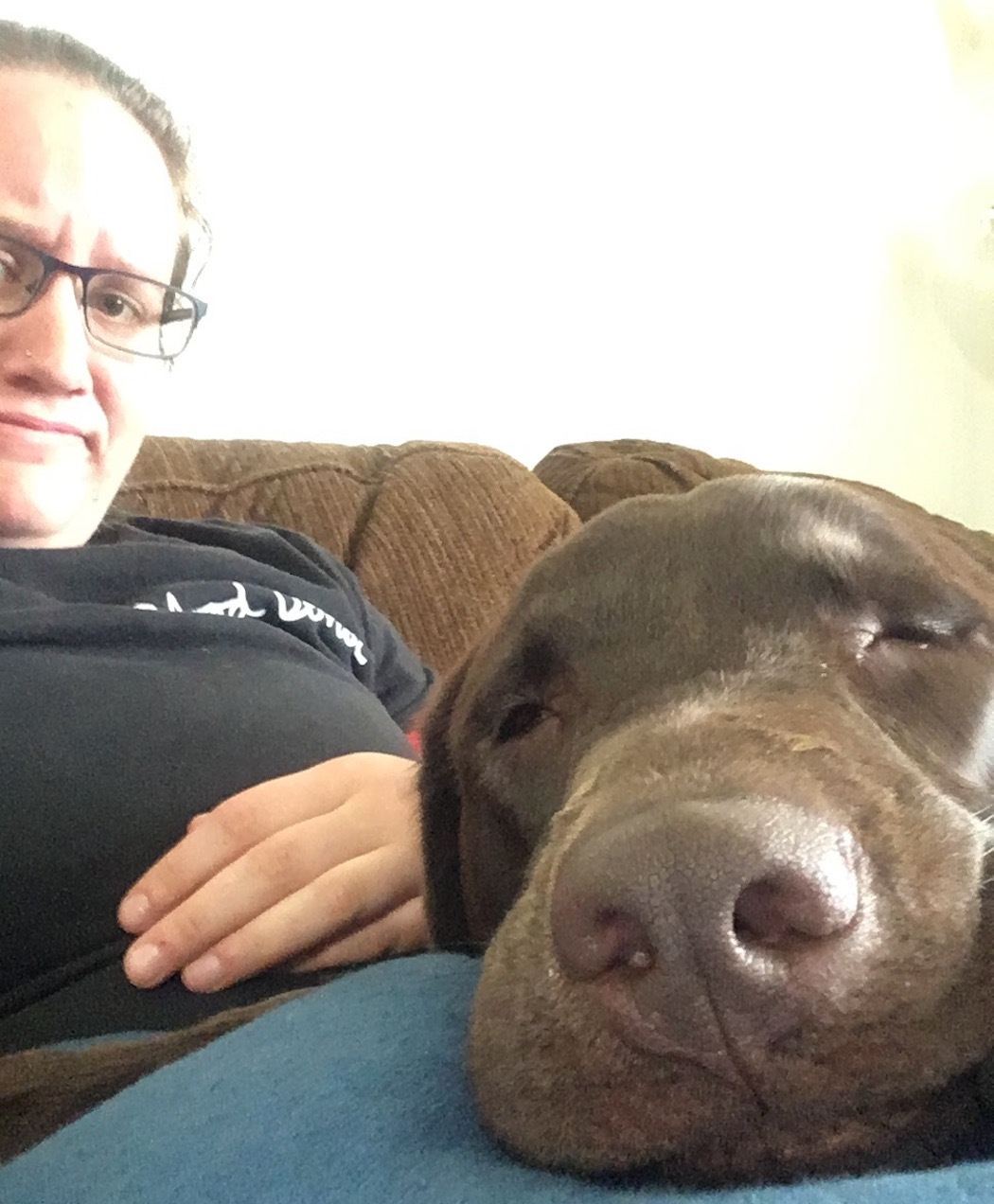 “Addie is my diabetic alert dog — she can smell when my blood sugar goes up or down long before I can sense it, and she tells me about it. Thus, she goes everywhere I go, and thinks anywhere that is not literally on top of me is too far away. Things she loves include: antlers, long hikes, sitting in desk chairs like a person, and treats. She wakes me up by sitting on top of my head every single morning.”