I think a lot about what it is I want from cis straight white men. They rarely succeed when they tell our stories, but we don’t need any more just about them. Should they stop creating altogether? That doesn’t seem practical.

The obvious answer is collaboration. Film and television, especially television, are such deeply collaborative mediums. Work with people different than you and actually listen to them. That’s a good lesson for anyone.

But there will always be writer/directors who work by themselves in those positions. And what about them? Well, we have an answer. Don’t try to tell our important stories. Just cast us as the fucking awesome lead in your vampire movie!

Brad Michael Elmore’s Bit isn’t a landmark film about the trans experience. But God is it fun. And it’s not without meaning. 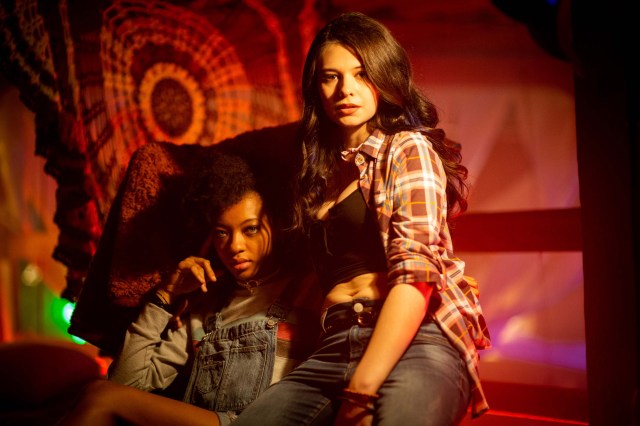 Nicole Maines as Laurel and Zolee Griggs as Izzy

Before getting vampired, Laurel, played by Nicole Maines, is just a regular 18-year-old trans girl with protective parents and no idea what she wants to do with her life. She decides to spend the summer with her brother in Los Angeles and that’s when things get interesting.

Anyone who watches Supergirl knows just how talented Maines is and she carries this movie with ease. She’s so casually present on screen and she absolutely kills a one-liner.

On her first night in LA, Laurel goes with her brother to a concert where she meets Izzy. There are immediate sparks. I watched this whole scene through my fingers, not out of fear of what might happen, but out of hope for what could. They end up on a roof. Laurel is so awkward and charming and overwhelmed. Then Izzy asks her why she’s sitting so far away. Laurel nervously looks down. Izzy says she didn’t just want to show her the roof.

Laurel says she’s nervous and Izzy asks if she’s too nervous to scoot over. Laurel shakes her head and moves closer. And they kiss.

I know I just said this wasn’t a landmark film about the trans experience, but I have literally never seen a gay meet cute with a trans woman like this on screen ever. And baby you know that’s a part of my trans experience!

Let’s not forget this is a vampire movie. The scene ends with Izzy sinking her fangs into Laurel’s neck, turning her, and beginning the meat of the film. But this seduction wasn’t just for show. Izzy explains later that people you’re attracted to taste better. SWOON.

Laurel gets accepted by Izzy and her vampire friends, including their leader Duke, who identifies as a “full blown fucking dyke.” But there are rules. No mind control on other vampires, and, most importantly, no turning men. Laurel asks about herself and Duke says it never even crossed her mind. Because in vampire club trans women are women!

Duke explains that they try to only eat men who deserve to die. It’s about 80/20. And it’s hilarious to see who they decide deserves it. Sure, they eat rapists. But they also eat a guy who pompously explains that it’s time we start listening to women as he rambles on and on.

Laurel struggles with the morality of her newfound vampirism, especially once she learns that a former member of the clique was banished for loving a man. She also doesn’t know where her brother or gay male best friend from home fit into her new misandrist life.

Throughout all this you feel Elmore grappling with his own place in the world, wondering if he should just disappear and hoping the answer is no. But this isn’t as annoying as it might sound. He’s smart enough to realize the appeal of separatism, the justifiable rage that Duke feels towards heteropatriarchy. He’s smart enough to let the film mostly be the queer soft-feminist vampire movie we all showed up to see.

But it’s true that sweet brothers and gay best friends don’t fit into separatism. It’s true that bisexuals sometimes fall in love with cis men. It’s tempting to solve the world’s problems with clear distinctions and new exclusions, but it’s not sustainable or fair. Sometimes a cis dude casts a trans woman as the lead in his movie and actually makes something good.

Duke says she dreams of a world where all women are vampires and it’s men who are afraid to jog at night. And I say a little fear still doesn’t hurt. Elmore got it right this time, but as long as he’s making work about queer women he should never forget his responsibility. He should never forget that we bite.

Drew Burnett has written 310 articles for us.