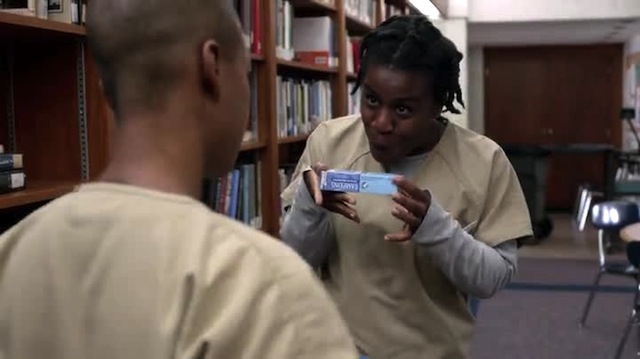 And that is a tip from me, to you.

Poussey is selling cigarettes hidden inside tampons at the library. She later finds out that Vee is bringing in more than just cigarettes after Leanne asks her for “the red light special.” Seems like Vee is selling heroin on the inside, just like she did on the outside, because she is the Voldemort of Lichfield. 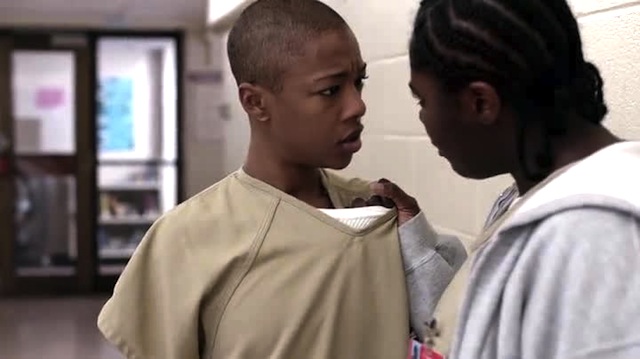 Taystee, I can’t just strip right here in the hallway. You seriously can’t wait like four hours until lights out?

When Poussey later confronts Taystee about it, Taystee stays loyal to Vee. QUIT PLAYIN GAMES WITH MY HEART, TAYSTEE. 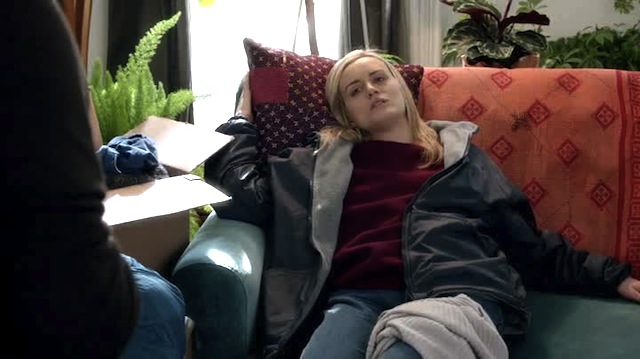 Piper reunites with Larry, which feels really awkward, except that Piper just starts listing all of the Rich White People things the house smells like: French pressed coffee, Anthropologie candles, etc. Larry says she can stay there with about as much genuine honesty as he can muster, which is to say: not much. Piper wants to go get burgers and drinks, and Larry, little mother hen over there, reminds her that she’s not supposed to drink. Oh, fuck that. Come on. That’d be the one thing I’d want to do, too. Cal breaks the tension by reminding them that actually, they have plans: you know, Grandma’s wake. Womp womp, Cal’s the only adult in the room. 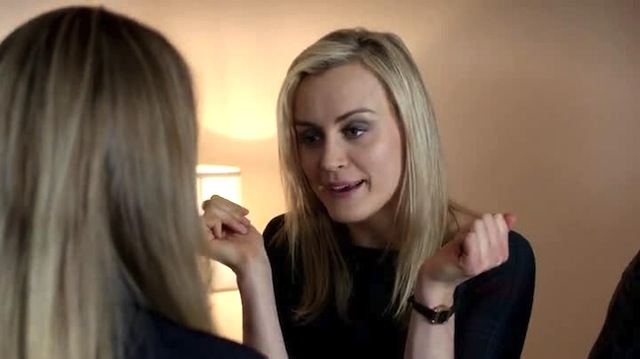 So then you loop the rope around your wrists six times, but be careful of your joints, you want this to be comfortable.

The wake in itself is fucking awkward, as no one knows exactly what to say to Piper in the receiving line. She helpfully lets them know that yes, she is the one in prison for drug smuggling and hot lesbian sex. So hard to keep all the grandkids straight! (ed. note: zing!) 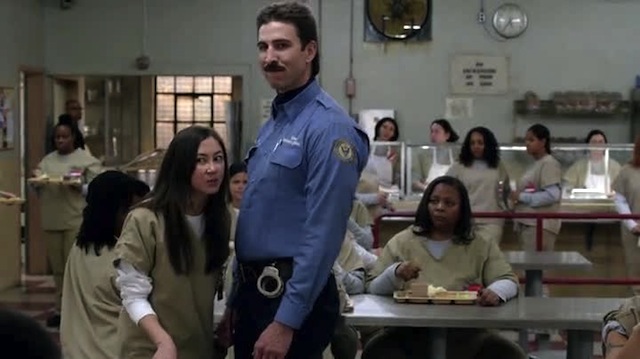 Guess I’m not the only one smelling terrible around here, hmm?

Soso’s shower strike has been put to an end, so instead, she begins a hunger strike. Mendez gets pissed and drags her out of the cafeteria. Surely this will end with funfetti cake and party games! 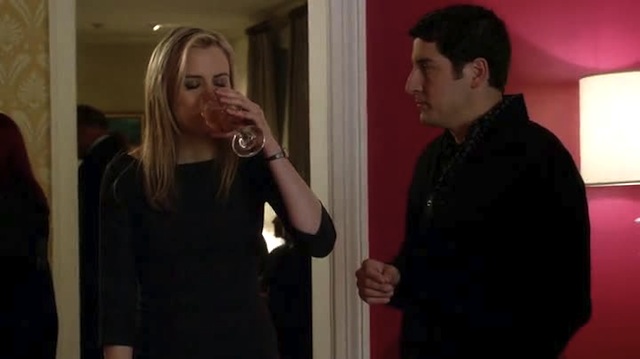 How I get through most family functions, too, Pipes.

After the wake, Piper is chugging wine and eating straight from the salad buffet (get it, girl) and Larry makes fun of her, saying he can’t believe she’s wasting time on lettuce. She says she can’t remember the last time she had a crunchy vegetable, which is gross and sad. Piper propositions Larry for The Sex and Larry’s all, “Oh, I don’t know, I’m sleeping with your best friend” but he doesn’t really say it in those words, or any words. Larry did not attend the communication seminar at the Couple’s Tantra and Vegan Soap Making Retreat last fall. 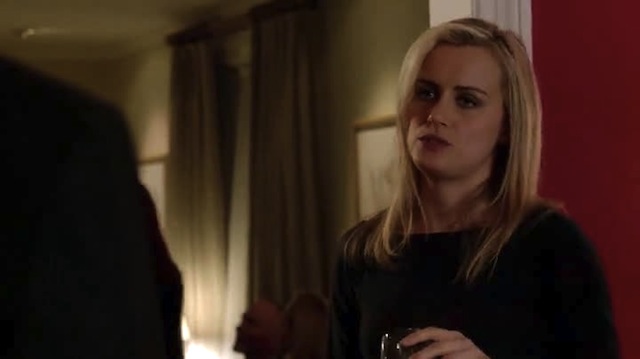 that awkward moment when you’re kind of drunk and you think you’ve said the best insult but really you just called someone a boogerface.

Piper’s father finds her to scold her for drinking, saying the last thing anyone needs is for her sentence to be extended because of violating her furlough rules. Piper turns into the badass form of Piper that we love and root for, saying, “Really Dad? Is that the last thing anyone needs? Or is that the last thing you need because you refuse to visit your only daughter in prison and you don’t want that weighing on your conscience any longer than it has to.” Daaaaaaang. He says he just can’t stand that she’s in prison, that’s not who she is. Oh yeah? Maybe it actually is who she is. I like that this episode just has people telling Piper who she is and that she’s finally pushing back against that. 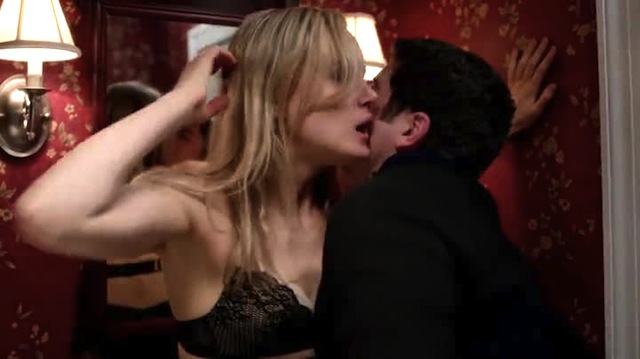 This looks so much easier on TV! Like where do I put my feet? I have no leverage and you’re not very good at this.

Piper pulls Larry into the bathroom to have sex. Having sex with your ex-fiance in the bathroom after your grandmother’s wake: Piper’s being very efficient with her time on this furlough! She tries to go down on him, but he says he slept with someone. She gets mad at him for telling her that while his limp dick is in her mouth, which is understandable! It would be way better if she at least got to have like a Snickers bar or something. 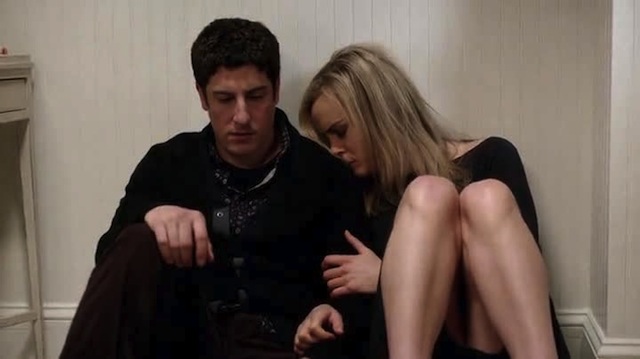 I’m trying to bite you but I’m too weak from prison malnutrition.

They end up sitting on the floor, discussing the cheating and the situation, and eventually just say “I love you” in the most honest way. This is a relatively high point in the vast sea of mediocrity that is Larry’s arc.

Meanwhile, the line for the bathroom is wrapped around the block. 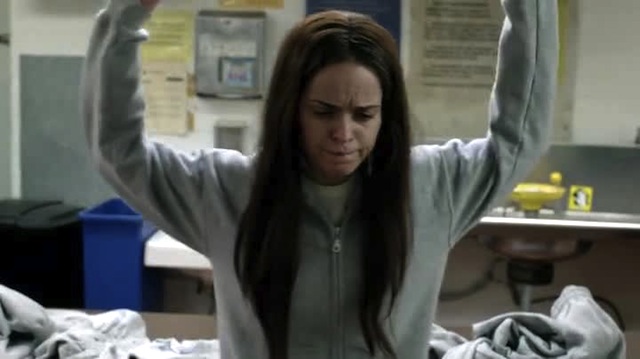 Down in the laundry dungeon, Pennsatucky slams Leanne’s face into the washing machine after Leanne stands up to her. 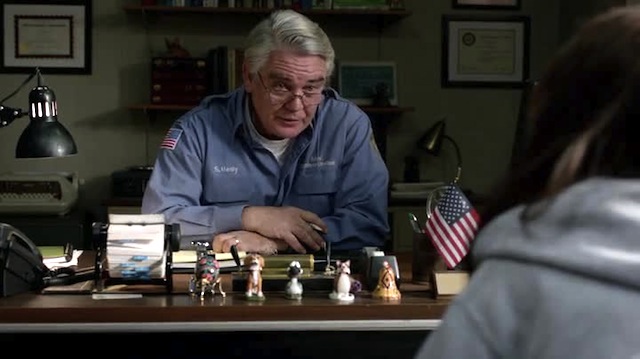 And that sense of emasculation, Tucky, is why I collect so many bobbleheads.

Healy, high on therapy, decides that he just wants to pretend what the fuck he’s talking about and become her therapist. Oh good! No one I would trust more with the fragile emotional and psychological wellbeing of women who have been doubly failed by social infrastructure and the prison system. 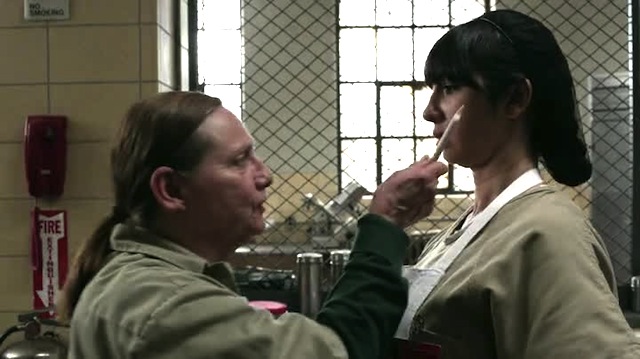 I just think the side swoopy kind of bangs would be really cute on you. Like to the side right here.

Red’s Golden Girls storm the kitchen to collect some of Red’s things. Initially this seems like it might be adorable but then becomes terrifying. They’re actually really scary here! I wouldn’t fuck with them! One of the women reminds the younger girls that she definitely mutilated her husband’s genitals – and liked it! – and it’s so fucking scary that the younger girls give over Red’s stuff immediately. It seems safe to say that tensions between different Litchfield factions are slowly on the rise.