If the DADT filibuster earlier this week was really upsetting for you, you might want to go make a drink/sandwich/alcoholic sandwich before reading this one. Maybe work on some art therapy. The bad news is that the Department of Justice has filed a fourteen-page brief trying to block Judge Phillips’ injunction of DADT, meaning that they don’t want to have to stop discharging soldiers until the policy gets sorted out. The other bad news is that there is no good news. The brief can be read here in its entirety, but the gist of it is that since the case against DADT was originally filed by the Log Cabin Republicans, the ruling applies only to members of the Log Cabin Republicans and not any soldiers whose discharge is actually at stake; also, that Phillips doesn’t have the authority to overrule the military, that somehow an injunction now will block other, later, very important judicial angles that the DOJ was going to take on DADT. And lastly, of course – OF COURSE – they still need time to study and strategize and consider, and that suddenly up and stopping DADT discharges would throw the whole military and therefore the entire world out of whack. (@advocate) 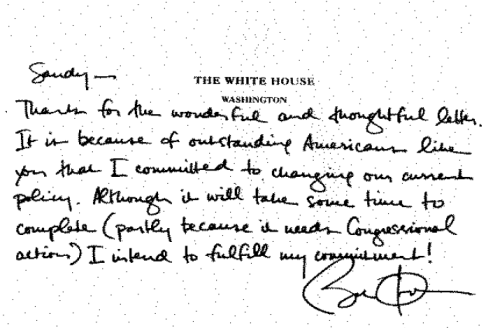 There are a few obvious responses to this information. For instance, that it’s patently ridiculous. Also, that Phillips has already addressed pretty much all of these arguments in her original decision. And maybe most significantly, that it’s a deeply disappointing position for an administration who has promised approximately eight thousand times that it wants nothing more than to repeal DADT as soon as possible. The DOJ is sticking to its guns on this one, and insisting that in some roundabout way that we’re probably just too young and naive to understand, this brief is actually working TOWARDS  a repeal.

I know. I know. I’ve got nothing. It’s ceased to be about how many chances we can give this administration to do nothing when they said they would do something; it’s about how many chances we’re willing to give them to do exactly what they said they would not do and still hope that maybe they’ll change their minds somehow. We like to think of ourselves as fairly patient and forgiving, but let this be the official notice that we are Reaching Our Limits.

The DOJ has yet to file an actual appeal of Phillips’ ruling, and there’s no guarantee that the federal court will entertain the arguments contained in the DOJ’s brief. If you’re playing along from home and trying to add up all the points in your head, the answer is yes, we are in fact hoping for one judicial department of our government to deny the request made by another judicial department of our government, and therefore move one step closer to upholding the promises of the executive branch that have been stalled indefinitely within the legislative branch.

If you are wondering where the people you actually elected are in all of this, and if you feel like you remember several of them promising that this problem would be solved by now, YOU ARE CORRECT. Would you like an audiovisual aid to help process this feeling? YES. ME TOO. Thanks, GetEqual! If you’ll excuse me, I’m going to go kill off the brain cells that deal with “the military,” “the government,” “politics,” “homophobia,” and “this fucking country oh my god.”