Have you all seen Black Panther yet? I went yesterday and would just like to report back: the hype is real, your expectations are not too high, this movie is SO FREAKING GOOD. So many amazing roles for women, the best written “villain” I’ve seen in years, and oh yeah, a badass princess engineer whose tech is going to save the world.

Here’s actress Letitia Wright on her character, Shuri, and repping Guyana wherever she goes:

Cynthia Malone wrote an excellent piece for Vice called “The Future of Science is Black“:

Scientists in authority positions have told me that social justice does not belong in science. I have been accused of “reverse racism” for speaking out against actual racism at an international science conference, where I organized a handful of workshops and presentations on inclusion. While being called on to do “diversity” work for free and in hostile environments, I am tokenized and my status as a scientist questioned—despite years of education, global fieldwork, and management experience in ecology and conservation science. I did not struggle through the academy as a Black girl from a marginalized socio-economic background just to teach white people that Black peoples are human. I did it because I am passionate about monkeys and apes and the science of understanding their worlds, despite whatever myths racist natural historians perpetuate about our relationship to them.

Women in STEMM Australia has been steadily putting out profiles of women in science. One I particularly enjoyed was Dr. Gretta Pecl, marine ecologist:

I think unconscious bias is a big challenge to gender-equity in general, regardless of the field. There is so much research now demonstrating that both men and women evaluate women much more harshly in many ways. It’s frustrating we don’t recognize that more broadly given the evidence. I was taught a trick to identify such bias very early on my career: when you have a negative reaction to a woman in the workplace run the same scenario through your head with two or three men at equivalent level and see if you’d have the same response. At the start I was horrified and surprised at my own gender bias – but that’s exactly the point of unconscious bias – it’s unconscious, and it’s pervasive throughout our whole society. But we can all do something about addressing it, starting with ourselves.

Why it’s so important for girls to find role models in female scientists – Q&A with Wonder Women author Sam Maggs. (Who, by the way, is in Becoming Dangerous with me and Mey.)

The Women in Games community on Facebook is approaching 3000 members.

Manifesto Jam — a digital gathering to collectively uncork utopian energy for the field of videogames — was recently held, and submissions are posted for your perusal if you want to read some good shit! Notably, The Communist Sister would like no more LGBTQ+ people to die in art this year, and Emma Dee says straight people are banned from making Let’s Play channels in 2018. 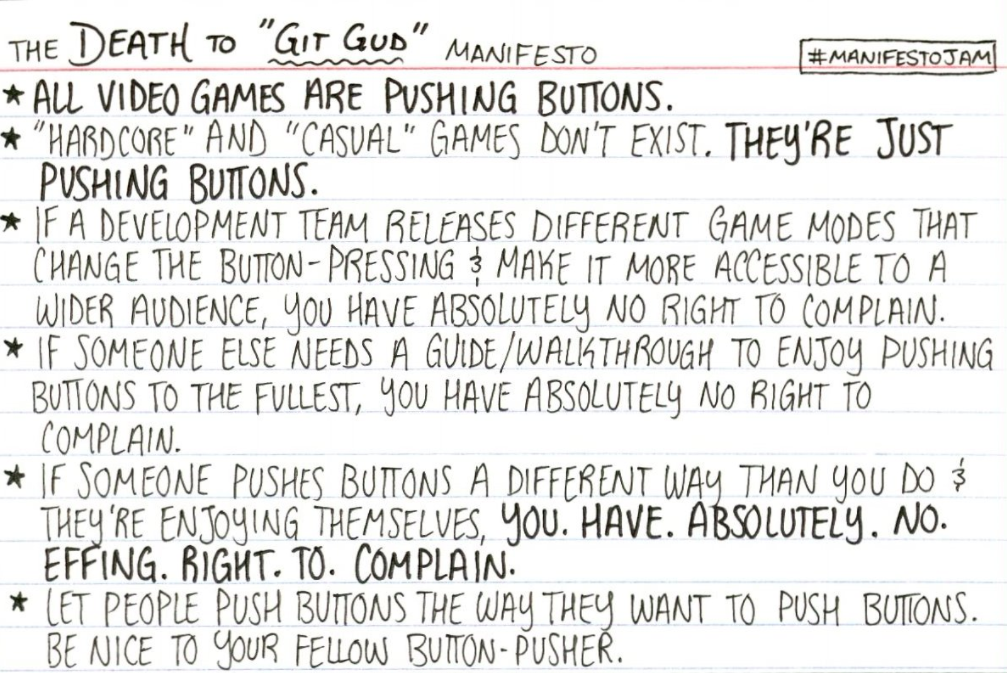 The Death to “Git Gud” notecard mini-festo by Emma Dee.

Hey, look! Sally LePage, your fave queer lady scientist on YouTube, has some good news to share about coral reefs:

Why Pay Secrecy Is Inherently Anti-Feminist

Gender inequality in the tenure evaluation process – likely operating through subtle or unconscious mechanisms – contributes to the gender gap in tenure.

Impact of Cleaning Products on Women’s Lungs As Damaging As 20-a-day Cigarette Habit.

Anna, structural engineer and Army veteran on “Fuck you, I like guns.”

Let’s be honest. You just want a cool toy, and for the vast majority of people, that’s all an AR-15 is. It’s something fun to take to the range and put some really wicked holes in a piece of paper. Good for you. I know how enjoyable that is. I’m sure for a certain percentage of people, they might not kill anyone driving a Formula One car down the freeway, or owning a Cheetah as a pet, or setting off professional grade fireworks without a permit. Some people are good with this stuff, and some people are lucky, but those cases don’t negate the overall rule. Military style rifles have been the choice du jour in the incidents that have made our country the mass shootings capitol of the world. Formula One cars aren’t good for commuting. Cheetahs are bitey. Professional grade fireworks will probably take your hand off. All but one of these are common sense to the average American. Let’s fix that. Be honest, you don’t need that AR-15. Nobody does. Society needs them gone, no matter how good you may be with yours. Kids are dying, and it’s time to stop fucking around.

Here’s what I have to say about gun control. I wrote it two years ago and we’re still having the same goddamn conversation, what the fuck. I’ve been donating to Pride Fund to End Gun Violence, maybe you’d like to too.