Nickelodeon’s new live-action musical-fantasy, Monster High, is 90 minutes of silly-adorable supernatural joy — and a balm to the hearts of anyone who’s been hurt by other magic schools’ bigotry against trans people. The film, which is also available on the Paramount+ app, is High School Musical meets Jem and the Holograms; lessons in friendship, believing in your dreams, belonging, triumph over evil, and the kind of chaotic good rule-breaking that reveals your heart’s true goodness while empowering you to save the day. It’s also a welcome addition to the spooky queer canon that’s got us gays out here celebrating Halloween every year, starting the second a single crunchy leaf hits the sidewalk. 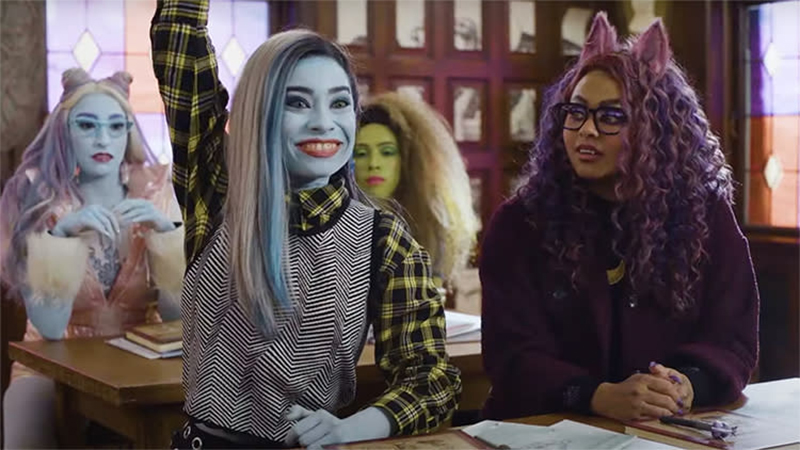 Clawdeen Wolf (Miia Harris) is a half-werewolf, half-human who’s been dreaming of attending Monster High her whole life. Her mom was a full werewolf and a famous fox on campus during her high school years, but she fell in love with a human and married him instead of another monster, leaving Clawdeen stuck between worlds. Humans are terrified of her, and if monsters knew she was half-human, they’d hate her. Humans are monsters’ eternal enemies; there’s a whole class on it! But Clawdeen heads off to Monster High anyway, determined to keep her human side hidden. She immediately becomes best friends with Frankie Stein (Ceci Balagot), a nonbinary genius who’s been Frankenmonstered together with some of the most famous body parts in history: philosophers, scientists, artists, mathematicians, physicists, even Marie Curie.

While they’re a whiz at their studies, Frankie’s not super adept socially, but Frankie and Clawdeen vibe from the moment they meet and become best friends. Every time Frankie introduces themself to someone new, they say, “Frankie Stein, pronouns they/them” and the other person responds in kind with their pronouns. It’s so chill and requires absolutely no explanation or exposition whatsoever. Frankie and Clawdeen’s third roommate, Draculaura (Nayah Damasen), has a secret she’s hiding too. Yeah, she’s a monster hailing from a long and prestigious lineage of ancient monsters, but her passion is witchcraft! Human witchcraft! When Headmistress Bloodgood sees the writing on the wall — literal writing, in blood — that there’s a person amongst them with an impure monster heart, she starts hunting down the human in their midst. Clawdeen, Frankie, and Draculaura are freaked out, but they’re still going to work together to break all the rules and make sure Clawdeen remains where she belongs! At Monster High! 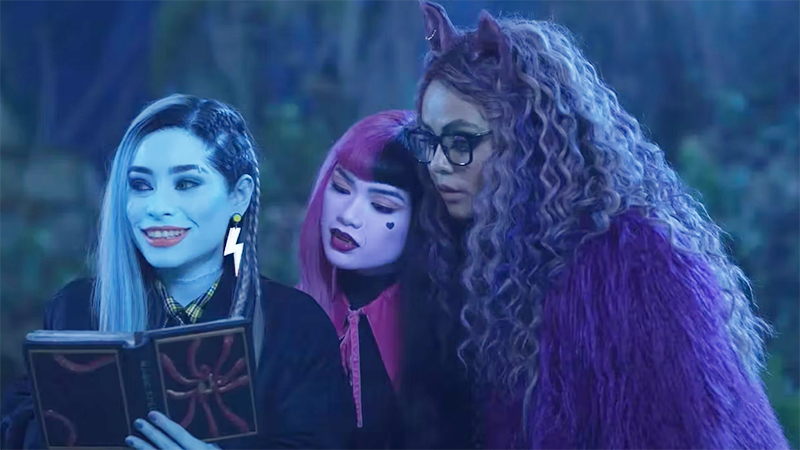 Ceci Balagot (he/they) chatted with TikTok dancer Conrad Rocha ahead of Monster High’s release, telling him, “I knew pretty much that I was a boy right off the bat. I could have told you in kindergarten that something was wrong [when they kept me in a group with girls]. That didn’t feel right and I think that’s what representation does… My goal in life is to be the person that I needed to see on TV.”

Between all the magic and mayhem and singing and dancing and general spooky revelry in Monster High, there’s all kinds of good lessons about accepting ourselves and each other, exactly as we are. About how our differences are what make us cool and interesting. About how trans kids are just regular kids and of course they belong at the best magic schools. There’s never any suggestion otherwise. Not bad for a “multimedia-supported fashion doll franchise” that launched over a decade ago! And right on time to keep up with Scooby-Doo!