Two years ago, New Jersey Democrats introduced a bill that would legalize gay marriage, and failed to pass it. A lot has changed in two years, though, and today the New Jersey legislature will re-introduce a bill that, if passed, would bring marriage equality to the state. 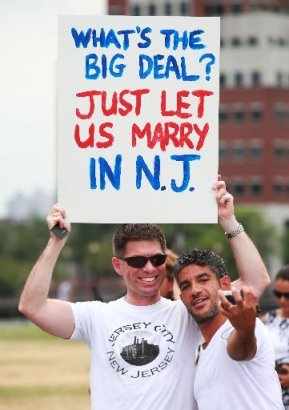 In 2009, New Jersey had a Democratic governor who said he would sign the bill if it made it to his desk. The original bill needed 21 votes in the state Senate to pass, and received 14. Now, in 2011, the bill has been assigned the number S1 to mark its importance as the first bill of a new session. Steve Sweeney, a Democrat who abstained from voting on the issue in 2009, now calls that decision his “biggest mistake” as a legislator, and is sponsoring the new bill as a way to make amends. Democratic lawmakers reportedly consider this a “key issue” for their legislative agenda.

What’s different in 2011 that a gay marriage bill seems possible now? The legalization of marriage equality in New York seems to have been a major factor in Democrats now apparently feeling that “momentum is in their favor.” It’s also possible that cases like Prop 8 have made a difference in thinking on both a national level and in legislators; several anonymous sources who are working on the still-being-drafted bill told the Associated Press that “denying gay couples the ability to marry violates their civil rights,” and that they were hopeful the governor would agree. (New Jersey currently allows gay couples access to civil unions.) Of course that’s always been the case, but after Prop 8 was ruled both discriminatory and unconstitutional for making marriage a straights-only club, it may be more likely that lawmakers will see it that way.

The other thing that’s changed since 2011, though, is that New Jersey no longer has a Democratic governor who’s willing to sign this bill into law. Republican Governor Chris Christie has been very open about not supporting gay marriage, and Steven Goldstein, the head of Garden State Equality, says that he “doesn’t believe there are any circumstances under which Christie, a national GOP figure who is often talked about as a future presidential prospect, would sign a gay marriage bill.” Christie seems very likely to end this bill before it becomes a reality, but he does have the option of ignoring it if it makes it to his desk. After 45 days, it would pass into law by default, without his having to actually sign it. It’s unclear what his motivation would necessarily be for doing that, though — aside from doing the right thing, being the governor under whose watch gay marriage passed in New Jersey may not bode well for his future career as a Republican.

There may not be much to be optimistic about for gay marriage in New Jersey in the very near future — while the Democratic sponsors of the bill are counting on some level of Republican support for it, getting the governor on board seems like an impossibility. There is, however, an ongoing lawsuit against the state filed by several gay couples, and in November a Superior Court judge ruled that it could move forward. It’s possible that there hasn’t been enough change over the past few years for marriage equality to come to New Jersey in the next few months. But it may be enough to have created an irreversible momentum; even if New Jersey doesn’t see marriage equality this year, it seems increasingly clear that it’s only a matter of time.