We are having an identity crisis. This is great, because gay people need more of those. This one, though, isn’t about who we are. We know who we are—we’re LGBT people and their allies. This identity crisis is about what we want, and though we agree about wanting equality, none of us are really sure what that means. A repeal of DOMA? The freedom to serve our country as we want? Or is it just about visibility — about knowing we exist? 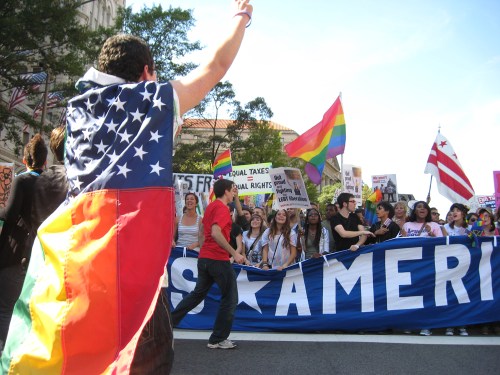 This past Sunday at the National Equality March in Washington, D.C., somewhere between 60,000 and 200,000 LGBT people and their allies marched through the streets of the District and ended for a rally at the National Mall organized by Equality Across America, a network of decentralized organizers from each of the 435 U.S. Congressional districts.

With this kind of organization, it’s no surprise that one of the main points touched upon at the rally was the importance of grassroots organization. The Equality March brought together a diverse group of speakers with a commendably inclusive message to reflect the diversity that exists, but is not always spoken of, in the LGBT community.

The rally lineup featured over 30 speakers, including LGBT activists David Mixner, Judy Shepard, and Lt. Dan Choi as well as grassroots organizers like Join the Impact: Chicago‘s awesomely jeans-and-hoodied Corrine Mina. Also, miraculously and without any rain, a rainbow appeared in the sky. So there’s what God thinks of that.

We may be criticized by older generations for being individualistic and demanding, but this kind of attitude has carried us to a point where we do not just want things, we expect them. Things kind of like, y’know, rights.

The rally kicked off with Rev. Troy Perry, founder of the Metropolitan Community Church, an International Protestant Christian denomination with a specific outreach to the LGBT community. Reading a letter from Desmond Tutu, Rev. Perry invoked the spirits of our predecessors—not just forerunners of the LGBT movement but also leaders in the Civil Rights Movement, advocates for education, and those fighting breast cancer and AIDS.

After looking reverently to the past, the speakers turned to our generation and told us what the crowd at the March already showed: we are a young, new generation of activists. And maybe that’s what we need. Never in the U.S. has the voice of dissent and demand been so loud as it has been when originated with the young, the newly passionate, and the naively enthusiastic. We may be criticized by older generations for being individualistic and demanding, but this kind of attitude has carried us to a point where we do not just want things, we expect them. Things kind of like, y’know, rights.

You’ve Gotta Fight for Your Right to Party

And we’ll fight for them, because we’re now at a place where we can. As Mixner reminded us, “They can’t take away our freedom—we already have it. It is ours, and we are going to fight to protect it!” 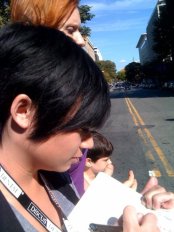 Being reminded of those who rallied and rioted and died in the streets before us, the beginning of the Rally for Equality instilled in the audience a sense of duty, not to the community or to the public, but to themselves. Trans activist Tobias Parker demanded this of the audience, “We must risk safety and comfort for the promise of equality. We must commit ourselves to fully authentic lives.”

These sentiments echo the message of the late Harvey Milk, who rallied his followers to come out to “the people you know, and who know you.” It was harder to come out in the 70s than it is today. Many of us live in places where we don’t have to fight to be unashamed or liberated. That’s the beautiful thing about our movement: the easiest way to accomplish it is just by living, and expecting what we deserve.

Despite its strong start, the March wore long into the afternoon, and as pointed out in our National Equality March recap, many of those without snacks didn’t make it through the 30+ speakers that Equality Across America lined up. And by “snacks,” I mostly mean “patience for a repetitive and lengthy message.”

Sunday’s speakers seemed very much to be trying to sell marriage to the crowd, to convince us that we should all rally around this one cause. And of course we should, but the speakers of the rally knew that their audience was one smart enough to care about more.

Rather than rallying the spirit of revolution, the lineup dwindled into little more than a hodgepodge of scattered causes and speakers getting their 15 minutes. And I once made a promise never to use the word ‘hodgepodge’ in my personal or professional life, so you know that means a lot.

Perhaps most interesting was the way many of the speakers handled the repeal of DOMA. The overarching message toward this repeal seemed a little on the defensive side, and, –aside from Cynthia Nixon, who was the first to offer a developed rationale on the subject—seemed to be caught in a vicious cycle of reasoning. We want marriage because it will bring us equality, but we can only attain equality through marriage. 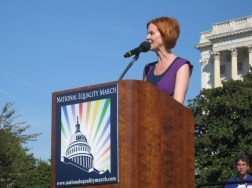 What does this mean about our leaders, or what does that say about us? Sunday’s speakers seemed very much to be trying to sell marriage to the crowd, to convince us that we should all rally around this one cause. And of course we should, but the speakers of the rally knew that their audience was one smart enough to care about more.

We already know that there is nothing heteronormative about seeking equality. We know that, in our current structure, marriage is embedded within the law. We know that marriage shouldn’t be our number one priority because it is not through marriage that anyone should seek validity. But we also know that this is what’s possible and that this is where to start our fight.

By the time the afternoon died down, marchers left the mall with a renewed sense of solidarity, but something was missing.

Solidarity exists, but strings are attached. What were we there for, to demand equality or to spot celebrities and cruise girls? We need to be committed and focused on our movement. The celebrities and girls are just a plus.

What have we accomplished, really? We knew, when leaving, that tomorrow wouldn’t be any different than yesterday, but will we ever feel that tomorrow holds unreachable promise? Ultimately, all we can do is live with a social attitude of demand — of knowing that we deserve this, and that we can own it.

Like anything in life, “never ask, never apologize” is the rule. If we’re going to expect rights, we can’t keep acting like we have to get permission. This isn’t high school and equal rights aren’t a bathroom pass. Asking only legitimizes the oppressor’s ideas that we should be seeking legitimacy through them.

And who are we not to take advantage of this luck?

We’ve been dropped into history, we’re seeing the push for LGBT rights at its most critical point. We’re living our own revolution, and we can’t do it passively. We have to do it everywhere, and we have to do it for us, no compromises, no strings attached.