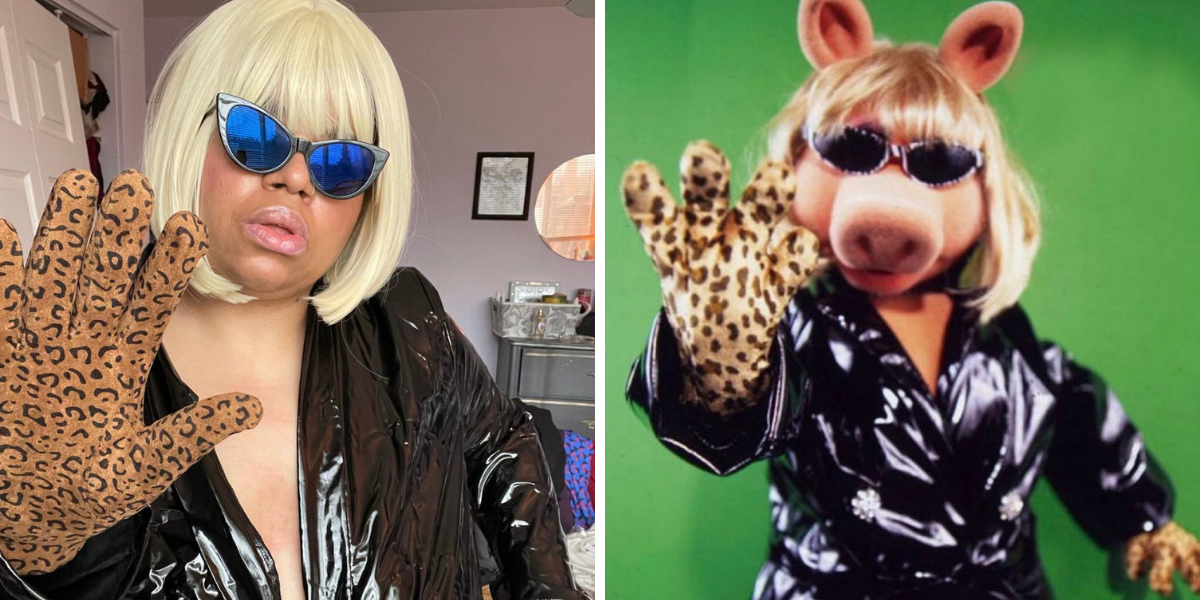 To be thirteen was to be on the precipice of want and being. I wanted to be cool, pretty, alluring, and fun. I was awkward, clumsy, aloof, and in pain. My body was maybe the second most cause of my despair. I was fat. I was born with a connective tissue disease that makes exercise hard, coupled with a heinous relationship to food, my body grew and grew despite me willing it to stop.

My mother tried all sorts of diets with me that didn’t seem to work before I turned 13. I was constantly trying low fat this, reduced sugar that. The dieting and scrutiny focused on my body in our family (and in the doctor’s office) made me feel like the center of something scandalous.

Because I was fat, I got called names. Sometimes, for kids, just calling a classmate fat wasn’t enough. No, kids got real creative with the names they called me. I used to feel so much shame in that. I was made to feel shame. I remember an exercise we all had to do in school. Students were to line up and be weighed. If you were under 125 lbs you got to stand in one group. If you were over, you stood in another group. In elementary school, I was already well over 125 lbs. When it was my turn to be weighed, I made a big show of taking off my sweater, shoes, things that would add extra weight. When the teacher called out my weight I heard snickers, grabbed my things, and hustled away.

Worse than the things kids called me were the names adults gave me. Talk about humiliating, having an adult look at you and nitpick things that were wrong with you, giving you names that were made to cushion the blow but were only nightmarish. There are so many names I have been called that I now have taken on for myself. Call it reclaiming. I’m not sure what it is but it has largely to do with the work I’ve done on accepting my body for what it is, whether I love it or not. There are so many names I have been called, and here are just a few:

They used to reserve husky for fat little boys but sometimes if you were a girl, especially a Black girl, you got stuck with that moniker. I always associated husky-ness with being out of breath. I think it’s in the -usk. Something in that syllable feels like walking up several flights of steps. I, of course, also thought of the dog. The stark whiteness against the coal-black, the big head, wide-set ears. Nothing says you hate a child like comparing their body to that of a fucking dog. Adults just straight-up setting up kids to have body complexes for the rest of their lives. If I remember correctly, there used to be a Husky section at Walmart or Ames or one of those stores from the 90s that have gone out of fashion. For the most part, I shopped in the women’s section for my clothes which made me look like a deacon’s wife. Ready for the church brunch!

When I eventually (and inevitably) developed an eating disorder and I could fit into the clothes in the juniors section it felt like such a personal triumph at an insurmountable loss. After dwindling down to nothing throughout highschool, I gained all that weight back and more in college. It was hell. Looking back, I wasn’t even that fat, like a size 14, but coming from a size 2 I felt like a balloon. My weight stabilized around that for years and then I got put on meds that made me gain weight and here I am now. Husky as I’ve ever been. I will refer to myself as husky now because I think it’s too funny. Also because I do be getting kinda out of breath when I climb too many stairs.

For the uninitiated, Jigglypuff is a Pokemon character that is round, pink, and let’s be honest: fucking adorable. I remember this one the most prominently. I was in elementary school in the auditorium waiting for the day to begin. I had told a group of girls I had a crush on a kid named D, or that I thought he was cute (calling him D to protect his identity even though I don’t know his name anymore). D heard the news, wrinkled his nose, and said animatedly: “mannnn, don’t nobody want that Jigglypuff!” Again, uproarious laughter from the audience. Very good, ya got me.

Like I said though, as an adult, looking back, I was adorable. Jigglypuff too is so fucking cute. Her round pink body, her big blue eyes, her little curly-q of a bang! Absolutely the most precious thing I’ve ever seen. I long to be that cute again. Shit, what I wouldn’t give! It would warm the cockles of my heart. Age has wisened me now, I’m no longer rosy-cheeked and cherubic, I’ve got gristle from years of paying bills. Getting called Jigglypuff back then was a slap in the face, so heartless. It got me at my fat little core. My molten center. But damn do I look back on that kid and wish she would have cherished being herself.

I’ve been called a cow so many times that I can’t even pinpoint a specific moment. Recently, a man I didn’t know commented on a ridiculously hot picture of me and called me bovine. I laughed into the phone. Being called a cow when you’re a young fat girl though? Wouldn’t recommend it. For kids, it’s such a sick burn. Like the funniest thing a kid could think of. They really yucked, chuckled, and guffawed when they called me a cow.

I’m the kind of adult where when I see a cow out the window during a long drive, I shout “moo-moo’s” because maybe some part of the kid I was still exists today. I love cows. What incredibly serene, elegant animals. Those big ass eyes with them pearly lashes. You could look at a cow and fall in love. They are big yes, intimidating for sure, but also wow so incredibly beautiful. I think that’s why the faceless man calling me bovine made me laugh. Like thanks bud you are correct, I’m gorgeous. I will also kick you into oblivion so watch your back bitch.

Again, if you have not ever been into video games, you may be unfamiliar with this one. But Kirby, like Jigglypuff, is a round pink character from the Nintendo universe. One of Kirby’s special powers was to literally eat other characters and take on their powers before spitting them out and across the screen. Because Kirby’s defense was to eat his competitors, you can just imagine the wealth of jokes I heard about how much I ate, the way I ate, etc., etc. I say wealth of jokes though it was really just one joke: “you eat a lot hahahaha.” Again, kids: very cruel, but not always creative!

My tormentors did not foresee me thinking, again, Kirby is really quite delightful. Go Google Kirby right now and tell me he’s not the sweetest little nub you’ve ever seen. Bright pink with blue eyes was just popular with animators back then I guess? Kirby was also a fierce competitor from what I remember playing Mario Kart and Super Smash Bros. He would spit or kick you off an island without any hesitation. Cute and brutal? That sounds like me!

Calling a fat girl Miss Piggy was knee-slapping territory in the 90s and 2000s, especially for kids. It was a very of-the-moment insult. “Shut up Miss Piggy!” would often be hurled at me when I tried to defend myself. I didn’t try and defend myself often, mostly just skulked away and traded lunches with the kid that still ate his boogers. Miss Piggy was a good insult because it went beyond calling someone a pig. Nah, you were Miss Piggy. The Miss implies some ownership over the Piggy part. You’re not just a pig, you can walk and talk and flip your blonde hair around.

This is the one that I take the most pride in now because Miss Piggy is a femme icon. Yes, she’s straight and dating a man-frog, but who else is serving hot looks like Miss Piggy? Nobody. Not me that’s for sure, though I do try. Is it weird to call Miss Piggy a sex symbol? Probably. I don’t care. I’m gonna put on my leopard print coat and embody that femme energy that was passed on to me from the legend herself. Pig! Miss Piggy is so cool because she’s in control. She’s a pig, but no one would dare try to insult her with the name. She’s too damn powerful and stunning to be bothered with the opinions of the monsters and animals she is made to settle for. If you could be any muppet, why wouldn’t you choose her?

So much of reclaiming and making jokes out of names I’ve been called comes from the work I’ve done over the years to be okay with my body. I’m at a weight I would have broken down at hearing when I was 13. Back then, when my weight climbed, I felt so helpless because doctors and parents were telling me I was unhealthy without ever looking past a number on a scale. I can laugh when I’m called a pig or a cow now because I just don’t fucking care. At the end of the day who’s alone with this body? Me. No one else is here so no one else’s opinion truly matters. I do love my body most days, other days I’m just kinda over having one. Like the drag of putting on clothes and makeup and feeding myself seems exhausting sometimes. Being a fat adult means I have to live for the fat kid I was, because she paved the way for me to have the life I have. I owe everything to her. For her to have to endure more self-directed hate would be traitorous.

Most of the insults wagered at me today are simple: “lose weight fatty.” Could I lose weight? Absolutely. Do I want to? No. Why? Because I’d lose my big honkin knockers. More important than having an enviable rack, I just really like who I am now, more than I ever have before. I don’t need to change, I’m fine, everyone else just needs to keep up.